The early-season opportunity to bike portions of Going to the Sun in Glacier National Park without any automobile traffic seems too good to be true. Miles of paved road passing alongside streams rushing with snowmelt, climbing into the high country, weaving through lush forests – all behind a gate and open only to bicycles and foot traffic. I’ve done enough recreational road biking and bike commuting to develop a sincere appreciation of a smooth surface, hard tires, and minimal traffic through beautiful landscapes but rarely plan trips around bicycling. Instead, like most backpackers, I plan my trips around trails. So it was a bit counter-intuitive to spend an extra day after a work trip that took me within an hour of Glacier National Park with the goal of spending an afternoon bicycling on pavement instead of putting my feet on a trail. 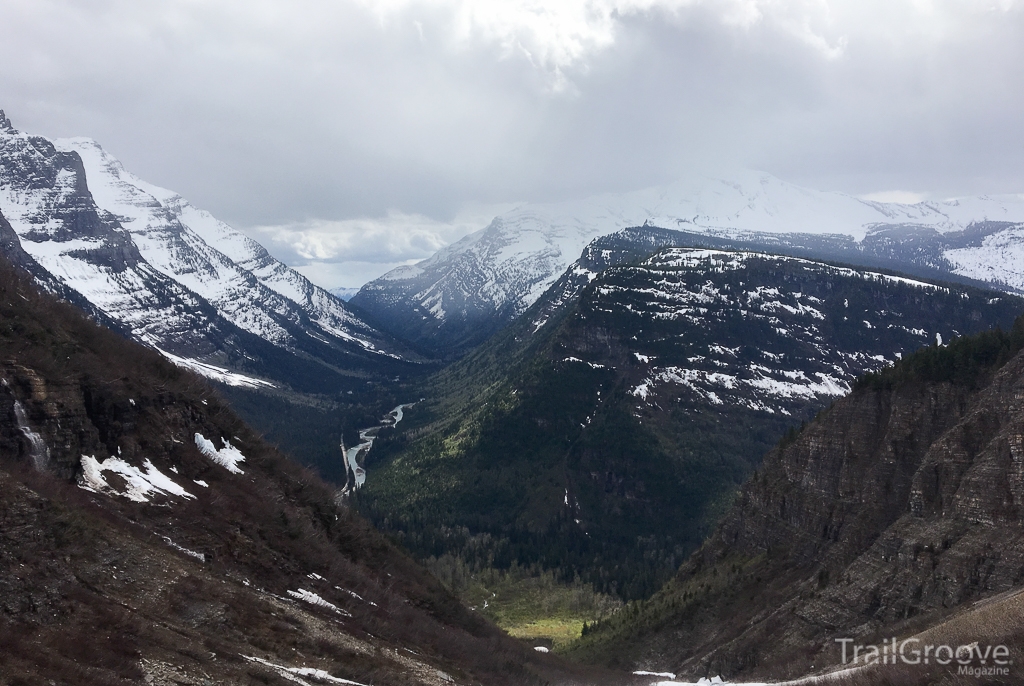 As someone who typically hikes and backpacks in wilderness areas or the more remote areas of national forest, the hustle and bustle of national parks is always a bit amusing to me. Arriving early in the afternoon on an overcast Saturday, I was able to get one of the last sites at Sprague Creek Campground (which filled up later in the evening) and awkwardly set up camp inside my vehicle before prepping for the ride up Going to the Sun Road. The forecast called for rain overnight and into the next day, with temperatures in the upper 30s in the morning. Needless to say, sleeping in the back of a Honda Element was a much more luxurious option than packing up a wet tent in a cold rain the next morning. 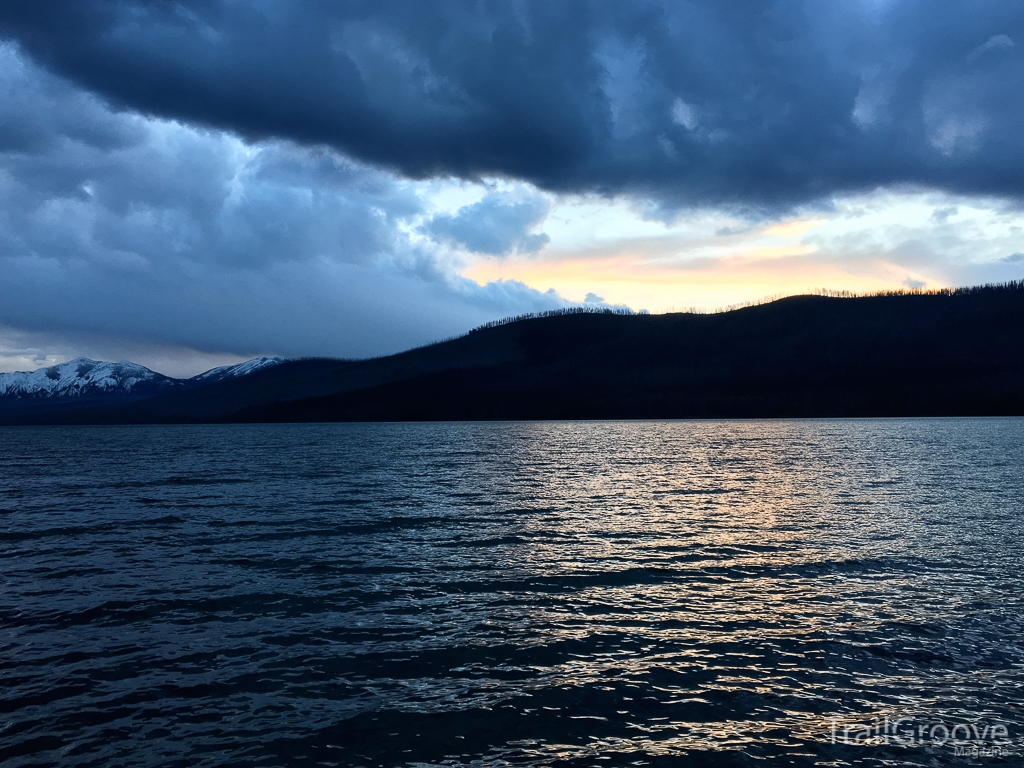 Rolling out of the campground on my trusty touring bike was a blissful feeling. No more driving for the rest of the evening, just turning pedals and trying to keep my eyes on the road as mountains, waterfalls, and expansive valleys competed for my attention. The first few miles from the campground to Avalanche Creek were open to vehicles, but traffic was fairly light considering it was a weekend. Once past the gate at Avalanche Creek, the real fun began. There were plenty of other cyclists, but no other cars. None. No looking over the shoulder, no low-level anxiety about inattentive drivers, no exhaust fumes. Just open road and other cyclists. Given my late start, many of the cyclists I saw were on the downhill stretch of their ride while I labored up the mellow grade towards Logan Pass. 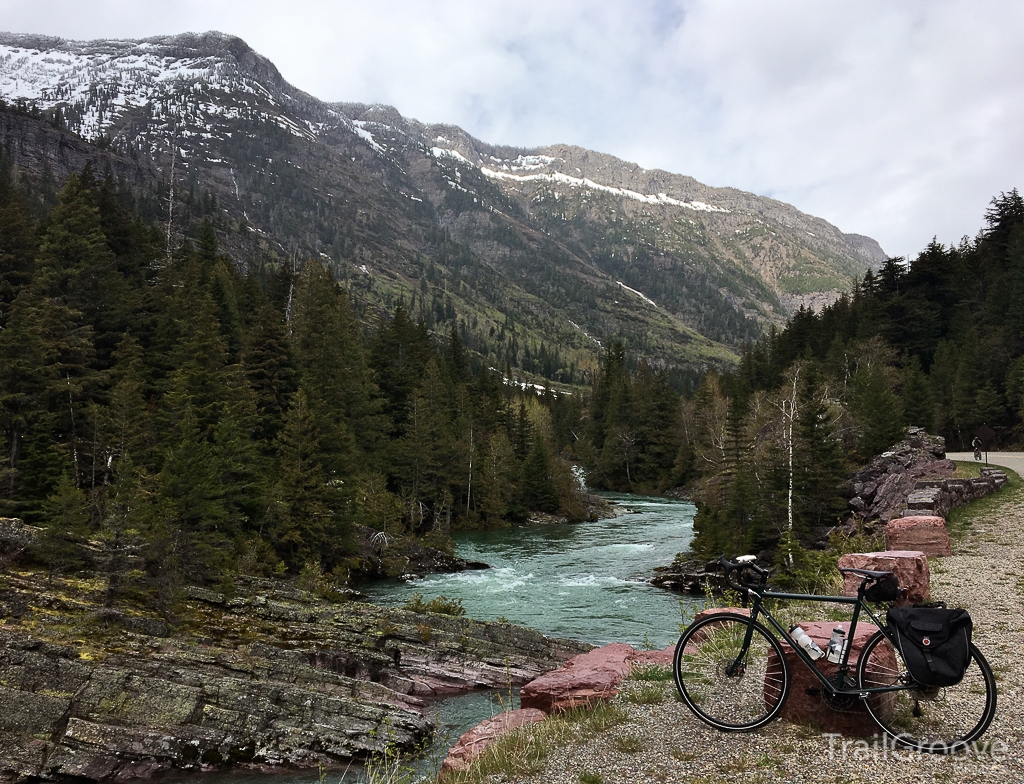 The temperature was in the mid-50s, which was perfect for biking steadily uphill. The flip side was that coming downhill would be rather chilly, so my saddlebags bulged with two pairs of gloves, a synthetic puffy jacket, and rain gear. Rather than hindering the view, the overcast sky and low hanging clouds made for dramatic lighting and a backdrop for the peaks that enhanced instead of obscured the mountains. 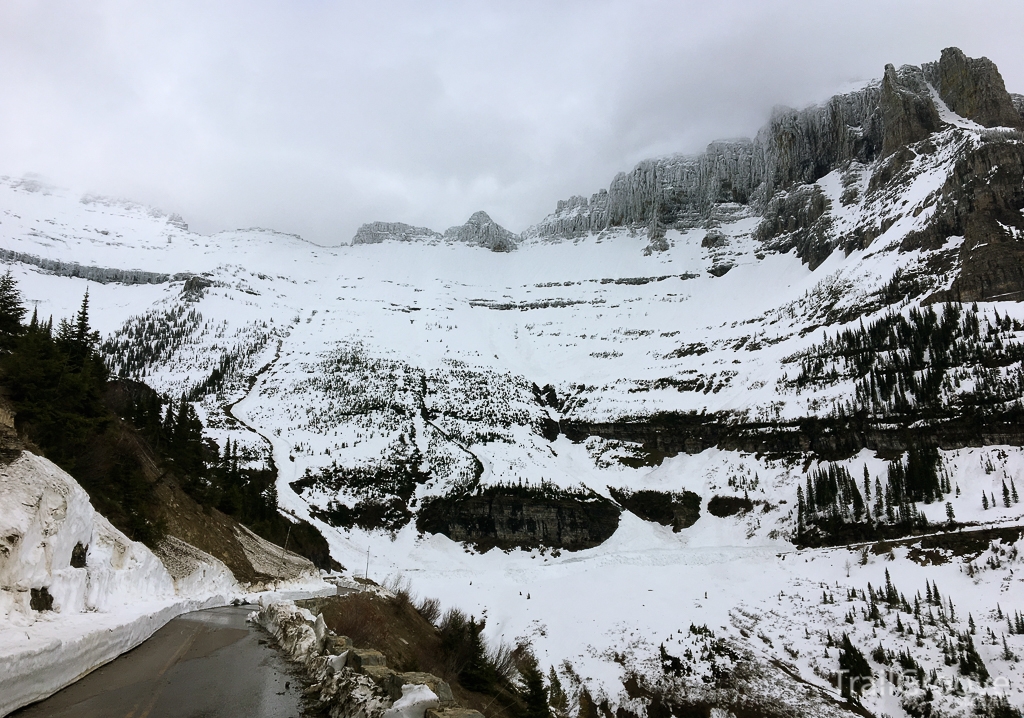 The steeper sections of the climb to Logan Pass, especially those after The Loop, gave me plenty of time to concentrate on the surrounding panorama as I doggedly progressed toward the snow line. The road is open to cyclists as far as they would like to go and the natural place to turn around is where plowing has ended and several feet of snow remain. I took a few victory pictures at the snowline, which was around 17 miles from the campground and over 2,000 feet higher.

The descent was simply thrilling. Watching mountain scenery sped by as I flew downhill at a safe but respectable clip without having to worry about inconveniencing motorists was sublime and, sadly, came to and end all too quickly. Miles that had taken me over two hours to gain were lost in a quarter of the time and I soon found myself pedaling easily along the flatter sections towards Lake McDonald and the campground. 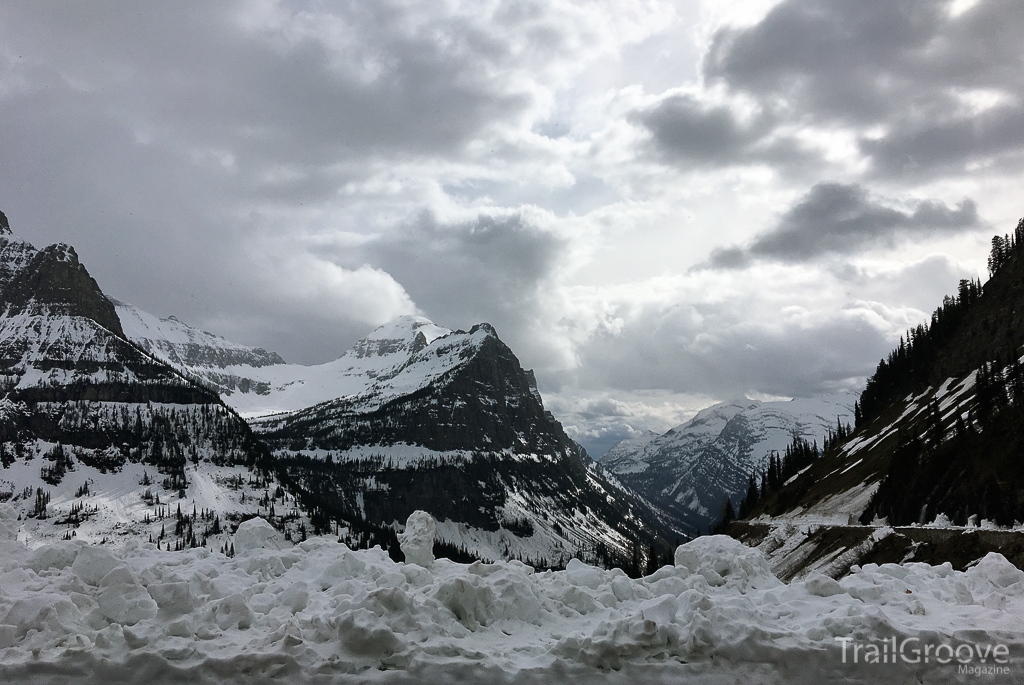 Although my car camping skills were a bit rusty, I had made an effort in regard to food and drink. Soon after pulling back into camp, I was snacking on cheese and crackers, sipping wine, and waiting for water to boil for a heaping serving of ravioli and pesto. Views of Lake McDonald made my al fresco dining experience five-star. Once dinner was over, the increasingly dreary weather and my tired muscles compelled me to get in my sleeping bag fairly early.

The next morning I awoke to enjoy the fruits of my decisions, both good and bad. Sleeping in the vehicle was a good decision, as a cold rain poured over the campground while I made coffee from the comfort of my sleeping bag. Not stretching in any meaningful sense after returning to camp was not a good decision, especially combined with a four-hour drive home. But perhaps the best decision was to have broken out of my hiking-only focus on outdoor recreation that been all-consuming in recent months. The ride the previous day was one of the most soul-swelling and rejuvenating things I could recall doing recently. That recognition inspired another decision that morning – a goal to make an early-season ride on Going to the Sun Road an annual event.

Information: The park’s webpage on bicycling, which also contains links to the Road Status page, is the best place to get started on planning your bicycling trip:

Best Time to Go: Mid-May to June offer pleasant weather and most of the road should be open to bikes by then, although this depends on the year and plowing progress made by road crews. Weekends are best because the road crews are not working, but can be a bit more crowded.

Getting There: Bicyclists can start in West Glacier and travel east, or at St. Mary and travel west. Beginning in mid-May a free shuttle with room for bikes runs from Apgar near West Glacier to Avalanche Creek (where the vehicle closure is typically in place).

Maps: The basic park brochure map is sufficient for this adventure. Alternatively Trails Illustrated 215 is better suited for additional exploration in the park.