Last month, Ted Ehrlich drove up from Colorado and we hit the Winds for a 2 night backpacking trip over the Fourth of July Weekend. 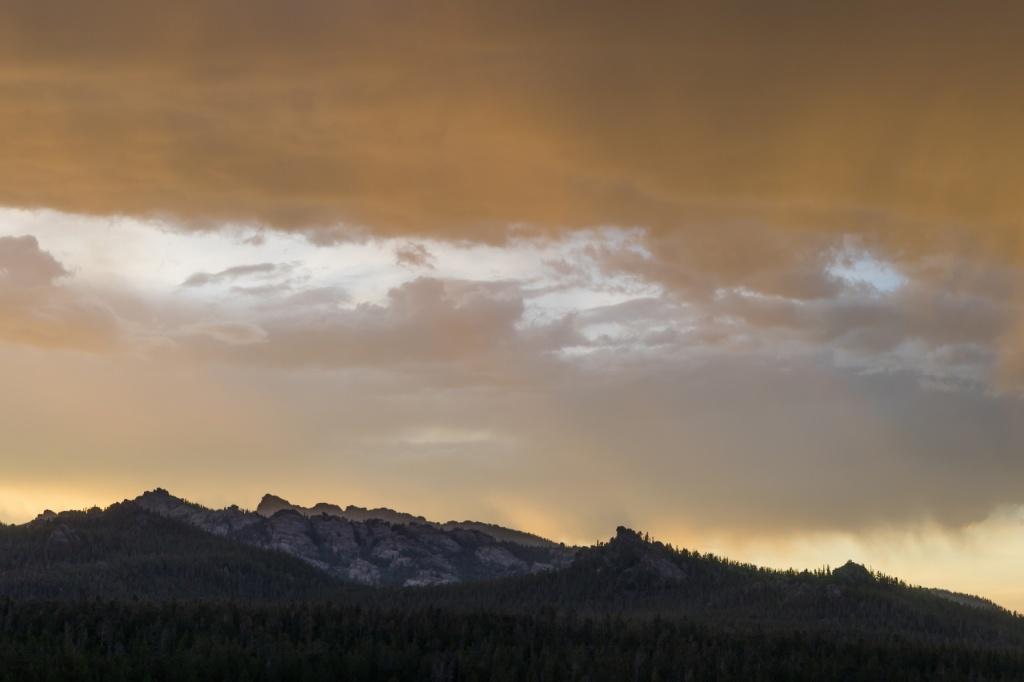 We’d originally planned a point to point hike from the Scab Creek Trailhead on the southwest side of the Winds back to Lander, but logistics were a bit of a concern as well as the driving that would take time away from a weekend Winds trip. In the end, we weren’t too fast getting ready the morning of our start day either, so we quickly scanned the map and created a loop on the spot.

A 50 mile loop was quickly created, and Ted made the suggestion of heading counter-clockwise. This would keep us lower in elevation on day 1, when afternoon thunderstorms were forecast; with the higher elevation days coming on days 2 and 3 where the forecast was more favorable. With a plan in place, we made the short drive from Lander to Worthen Meadows Trailhead, which sits just under 9000 feet. Arriving shortly after 10 AM might not have been the early start we planned, but it was early enough. Quickly we made our way over Sheep Bridge, crossed over the wilderness boundary and then back out as we headed up towards Shoshone Lake. The lake remains outside the boundary, so it’s a popular spot with 4 wheel drive and ATV enthusiasts alike. It was the 4th of July, and we spotted a few parties camped along the lake shore with their vehicles, but overall the area still felt fairly remote. 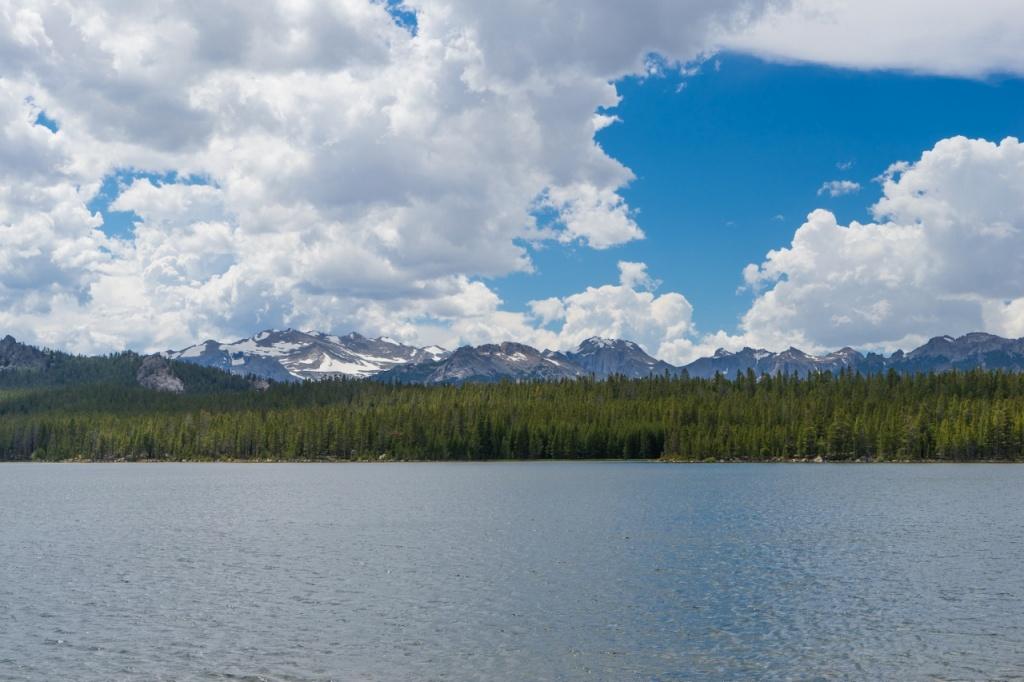 We quickly crossed the outlet of the lake, were bombarded with mosquitoes, briefly lost the trail, then made our way towards Dickinson Park. It was an easy trail, and we’d even managed to keep our feet dry thus far. Then came the realization of that soon ending. The trail stopped perpendicular to the North Fork of the Popo Agie River, with remnants of an old, washed out bridge on both the near and far sides. Only rushing water flowed between. We’d be wading this one. 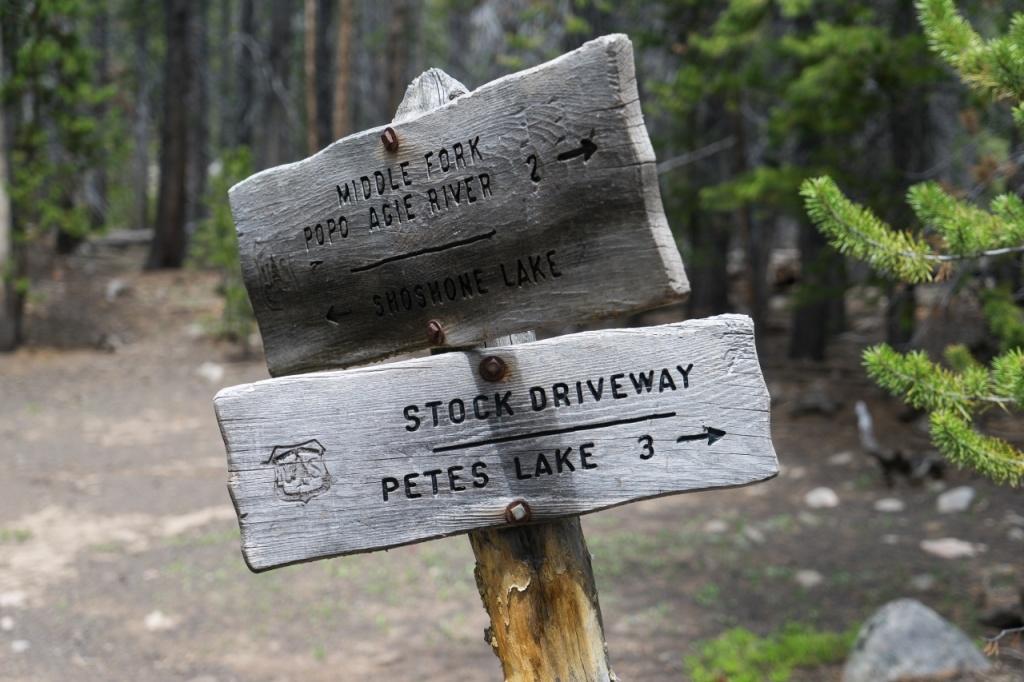 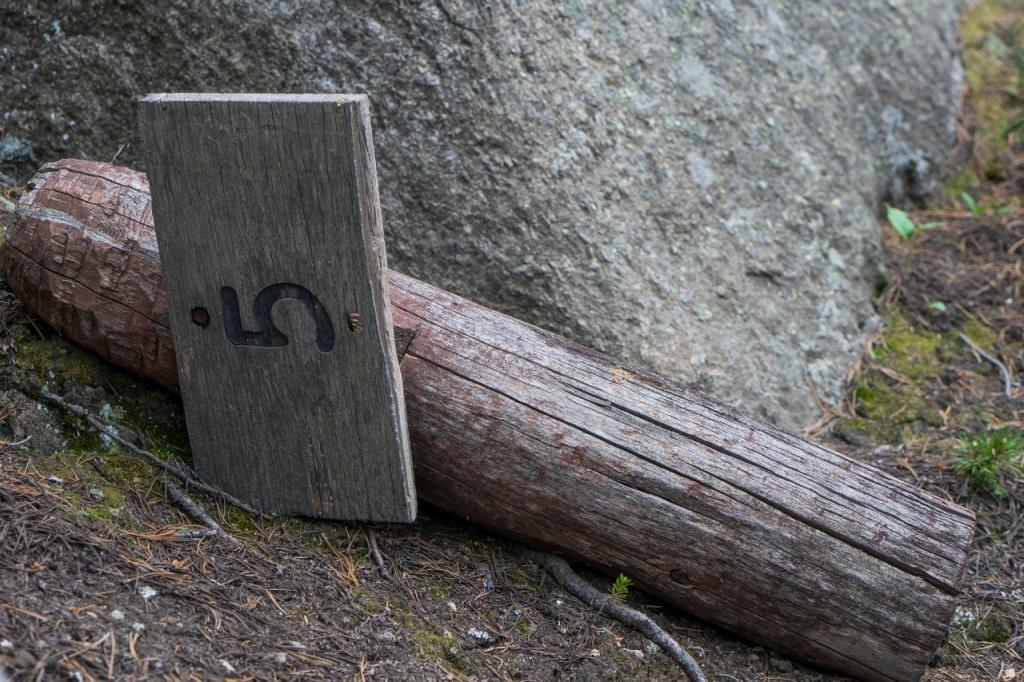 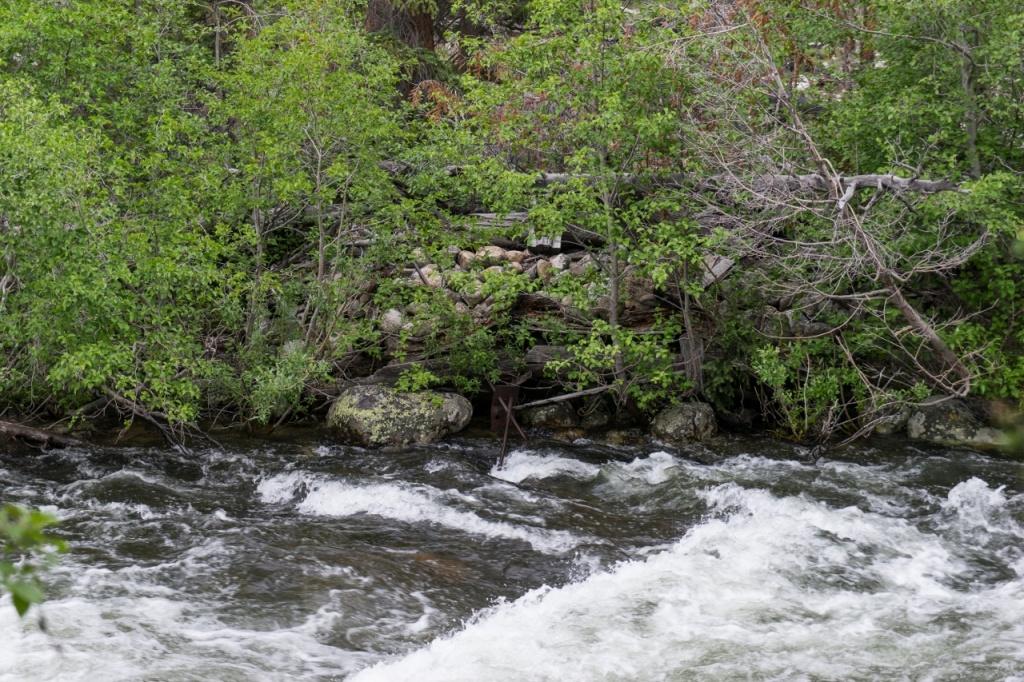 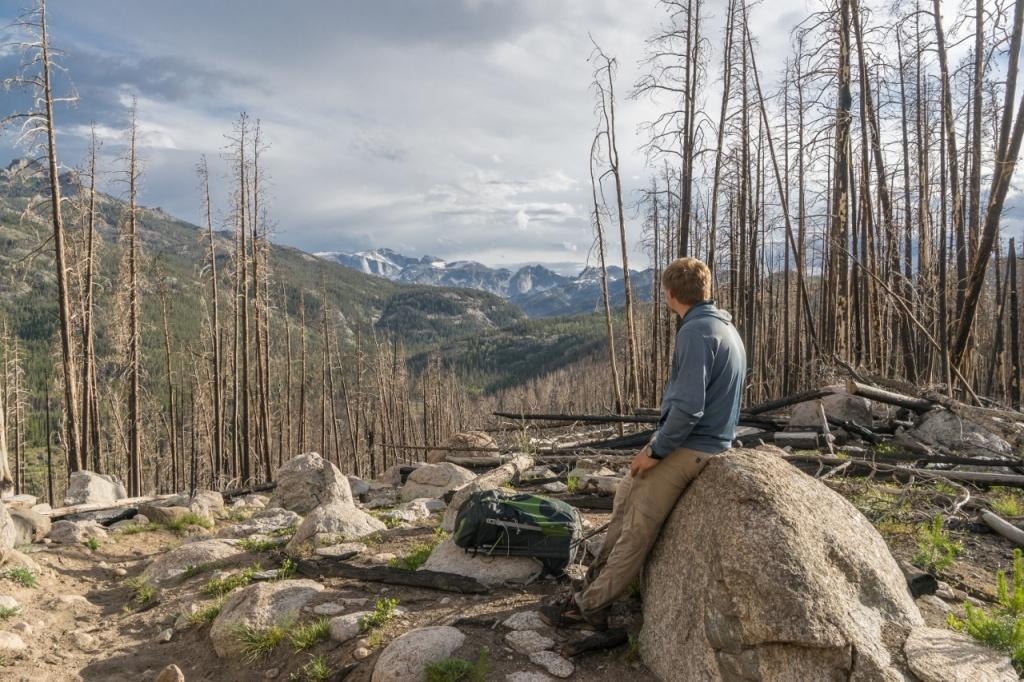 The first day would come to a close with an amazing sunset, no fireworks, some rain, and more mosquitoes. Or so we thought. After dark, I began hearing bells. Lots of bells. In the distance they could be heard towards the creek below us, where we’d filtered water earlier. I’d already settled into my tent, and Ted into his bivy sack 50 feet away. “Hey Aaron”, I heard Ted shout out. “Yeah?” I replied. “Do you hear bells?” Ted asked. Briefly I considered replying that I heard nothing, only the normal sounds of the night, but I replied with a couple guesses. “Yeah, goats, llamas maybe?” The bells continued throughout the night, their source hidden by the darkness. As the night wore on the sound only got closer, and at 3 AM I looked out from under the vestibule of my tent and could see shapes moving perhaps 50 yards away, some light, some dark, but I dared not shine my headlamp. I didn’t want whatever they were nosing around my tent as I tried to score 2 or 3 hours of sleep between the relentless ringing.

Daybreak of day 2, bells long gone. We packed up and made our way to the Bears Ears trailhead, then aggressively climbed over 11,000 feet and closer to 12, as the first snow of the trip made an appearance. At the top of the climb, a huge plateau with amazing views to the west. Cameras remained at the ready, as did the map in an attempt to identify everything in sight. 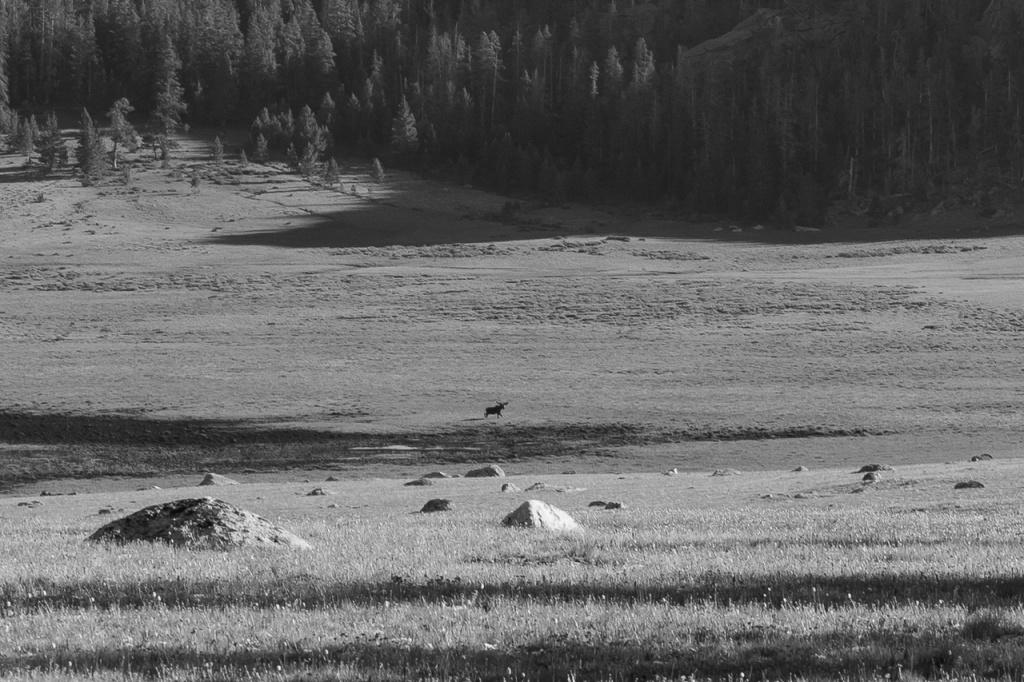 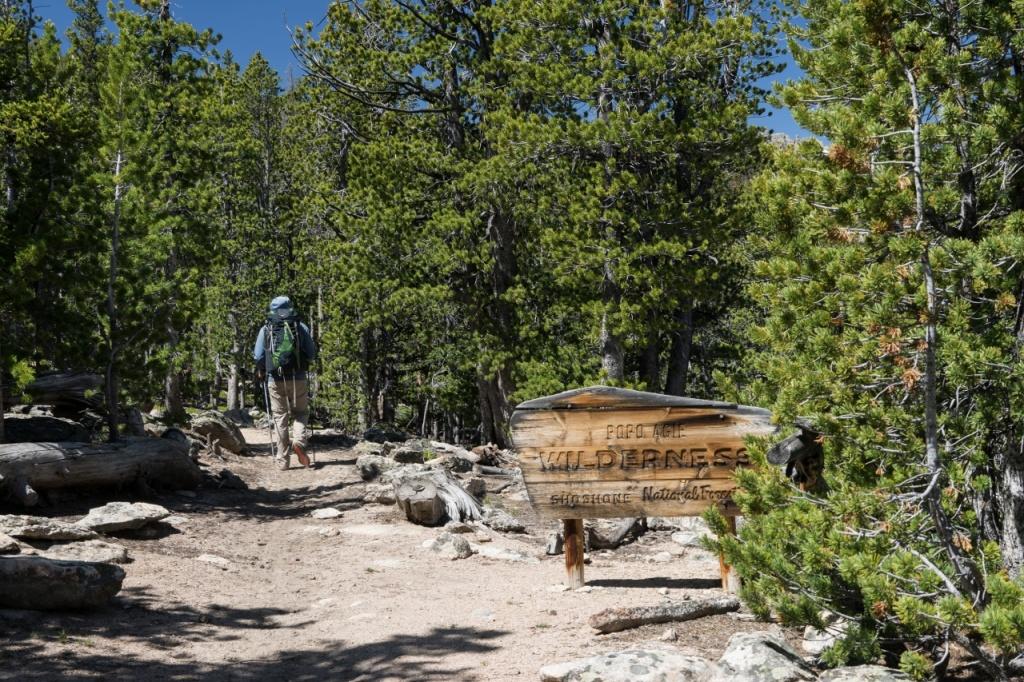 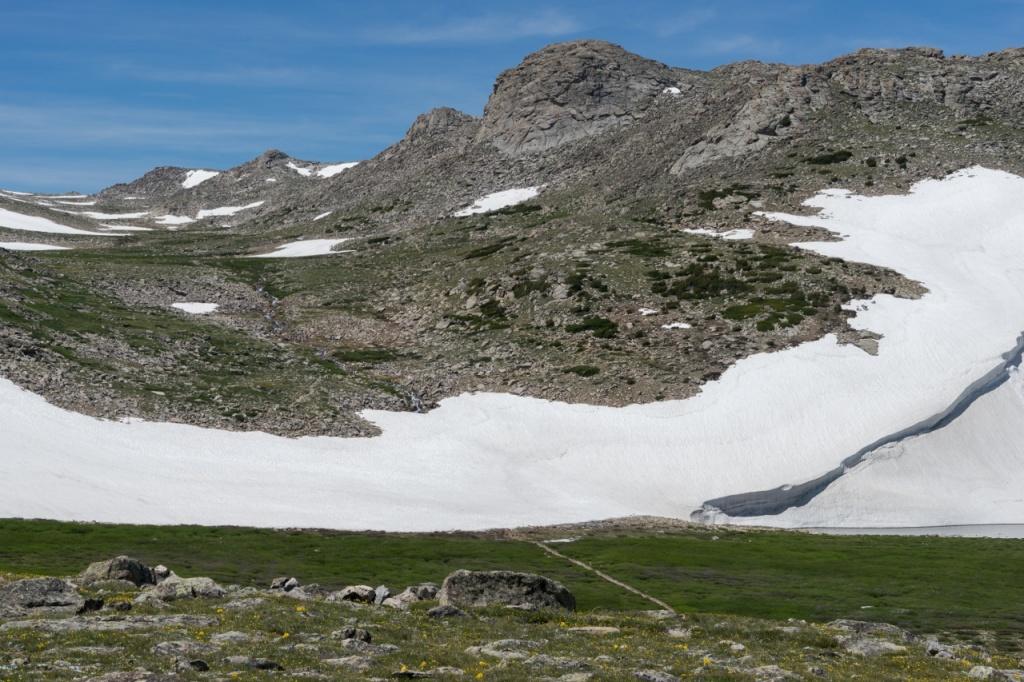 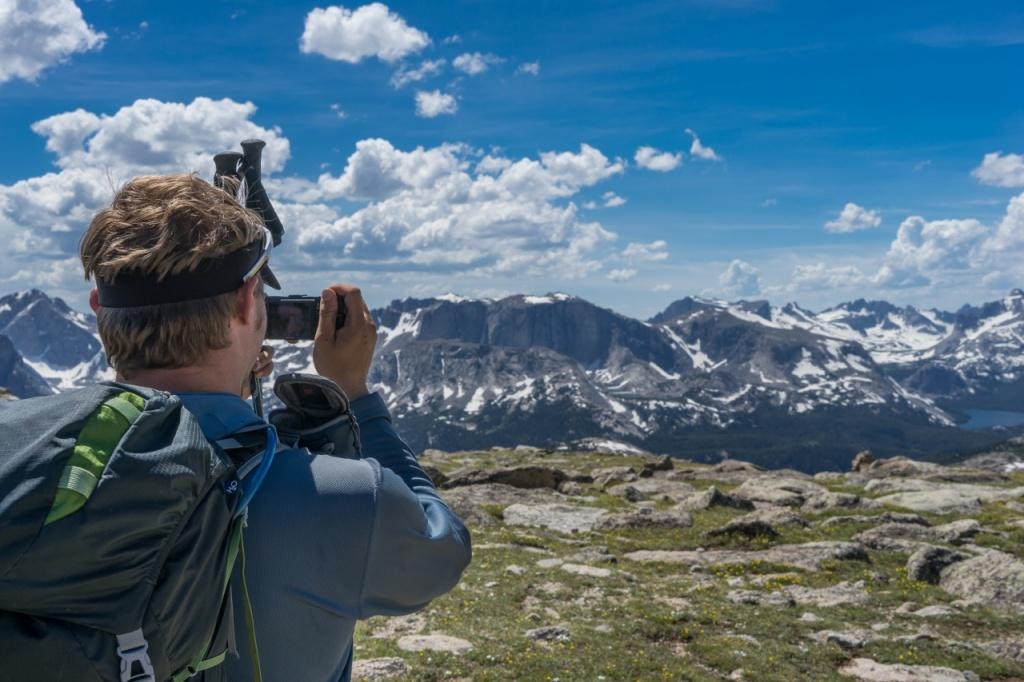 Travel on the plateau was easier and lasted for miles, as we connected with the Lizard Head Trail and made our way over or around a few snowfields, and just a touch of talus. Descending past Lizard Head Peak, we caught a glimpse into the Cirque of the Towers, the valley still well covered in snow. We made camp for the night along the North Fork of the Popo Agie River, now far upstream of our crossing the day prior. 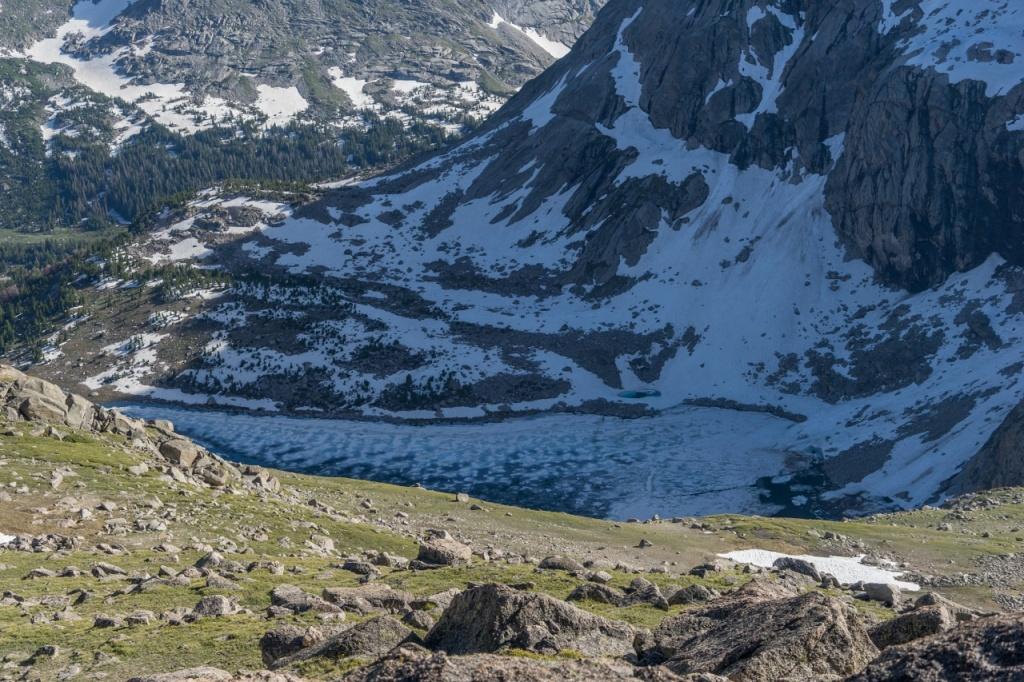 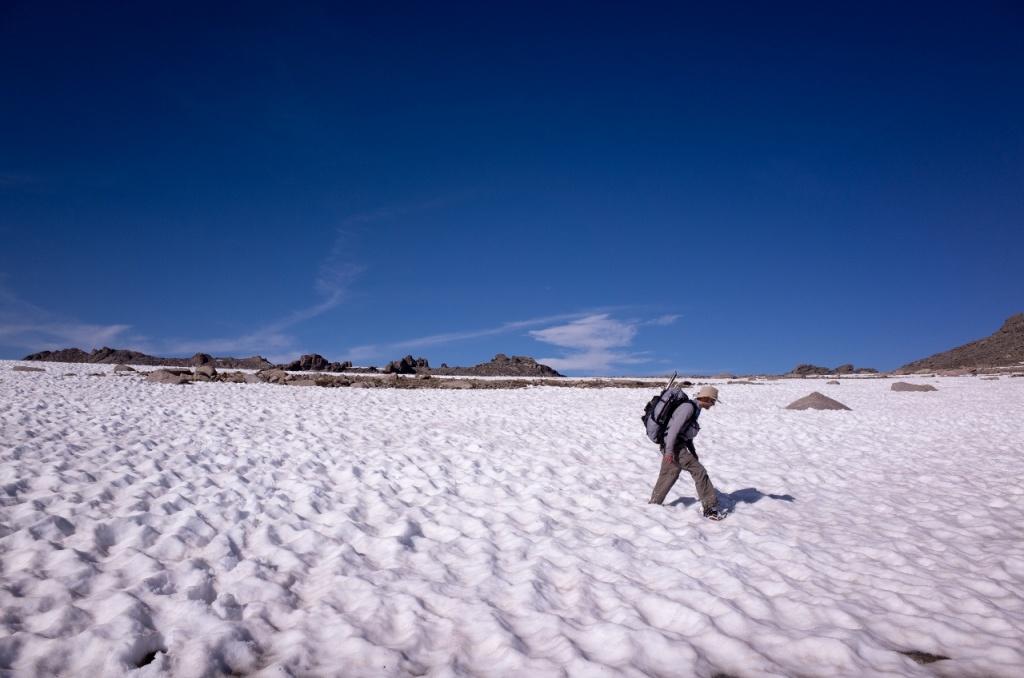 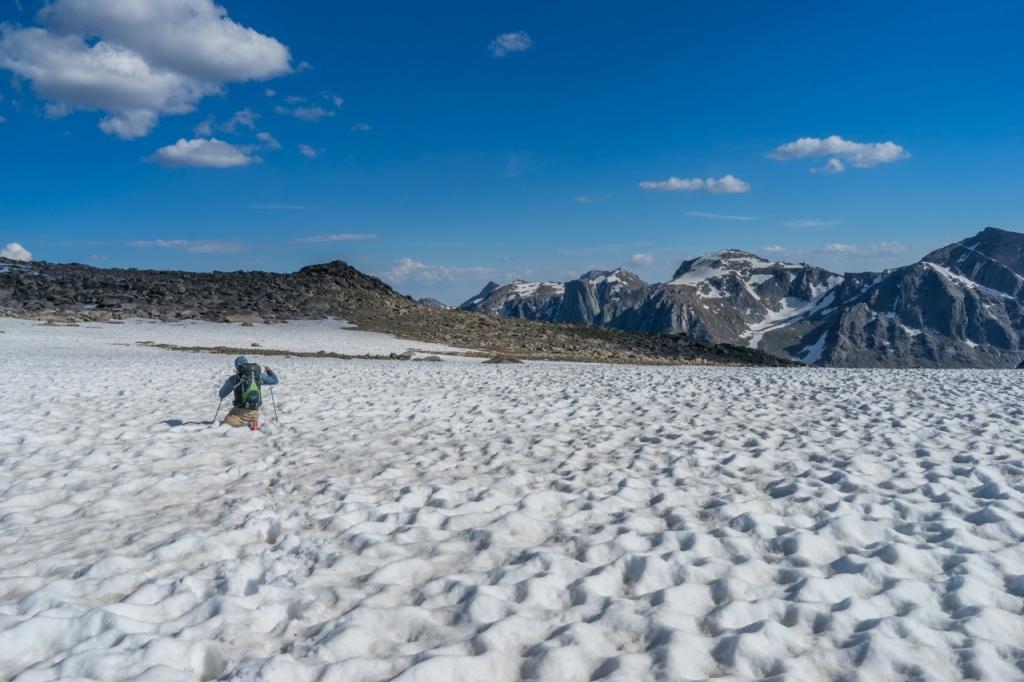 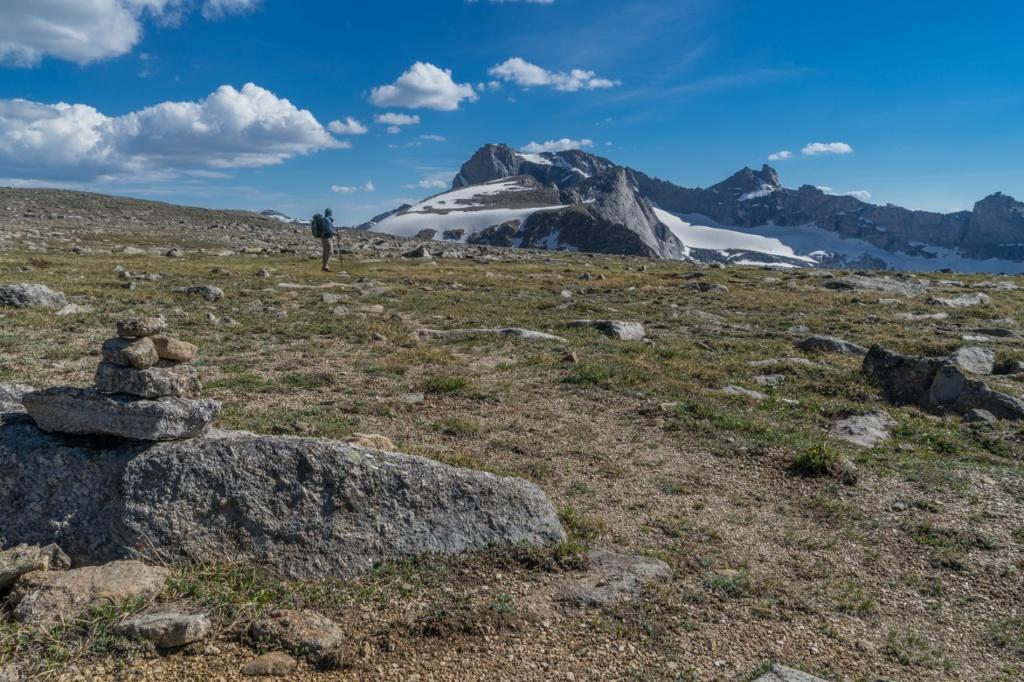 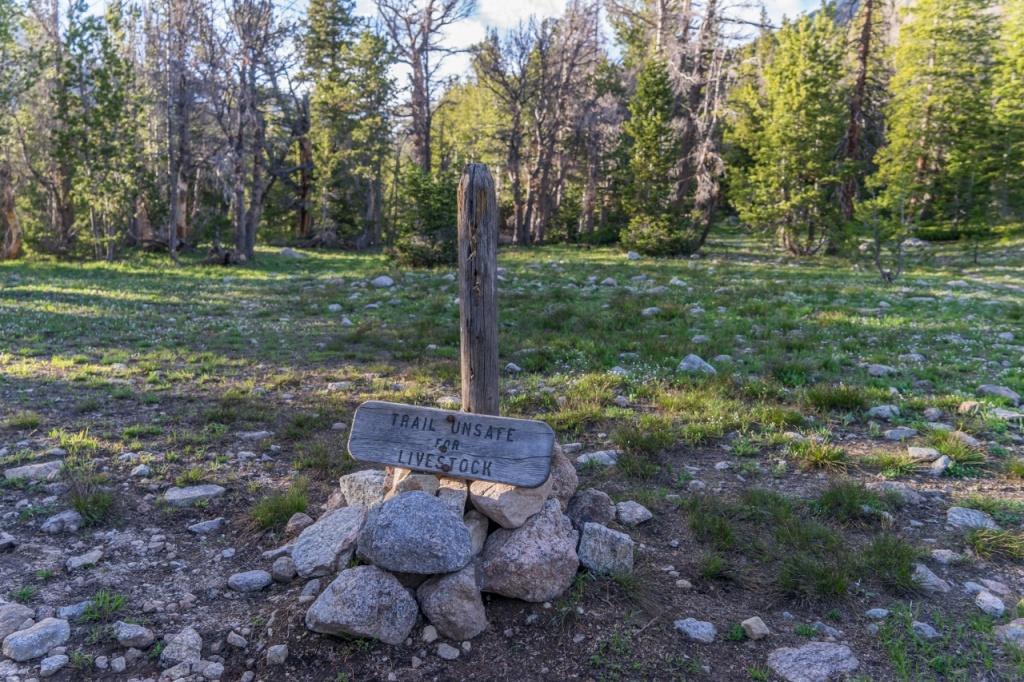 Day 3 and out. About 17 miles left. Another river crossing – This time it was flowing deep and fast enough to require our full attention, so no pictures. Ted needed to be at work back in Denver the next day and I had responsibilities at home, so we hiked fast. Just a couple miles from the car, Ted and I split up. Ted followed a longer, downhill route to Popo Agie Falls and a water slide just above that was quite a tempting option after 2 and a half days of hiking. 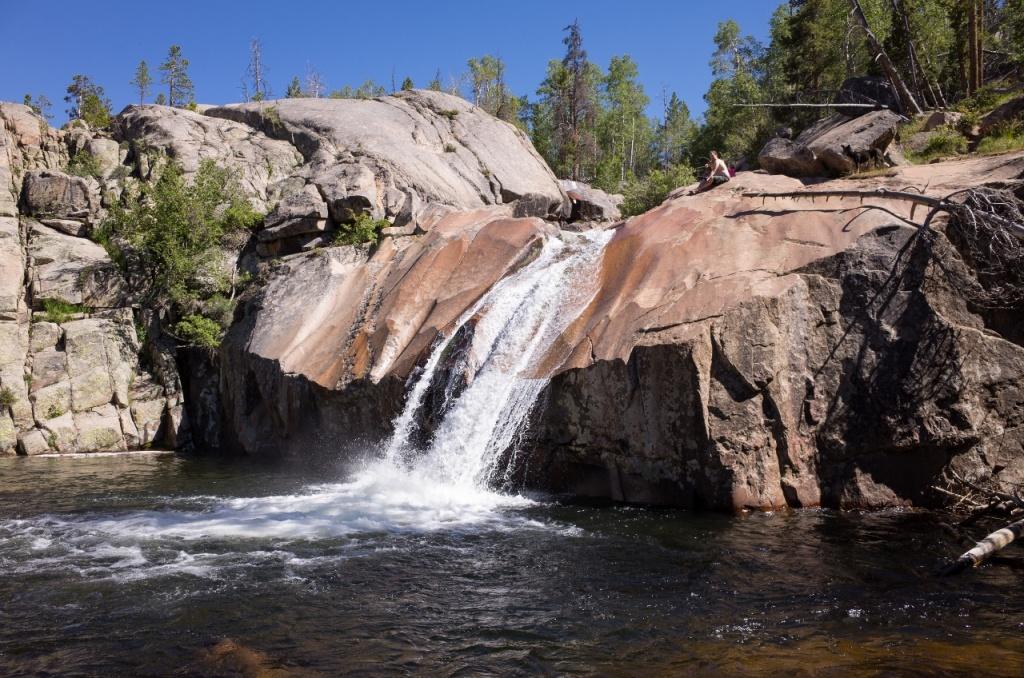 I went uphill, though a shorter route and back to the car. The hike nearing completion, I dumped water and hiked with a light pack, though by the time I arrived at car I questioned that decision in the hot afternoon sun. I’d pick Ted up at the Middle Fork Trailhead an hour later, with a ~55 mile, weekend loop in the Wind River Range now complete.