Recent books and movies have inspired countless hikers and potential hikers to dream about thru-hiking one of the “big three” of America’s long trails: The Appalachian Trail, Pacific Crest Trail, or the Continental Divide Trail. However, most people that attempt the feat drop off the trail before completion. A six-month commitment to a hike can become just too difficult. Countless others don’t even try; it’s just too much time away from family and the lives they’ve built. Completing all three trails, the “Triple Crown of Hiking,” is beyond even contemplating. 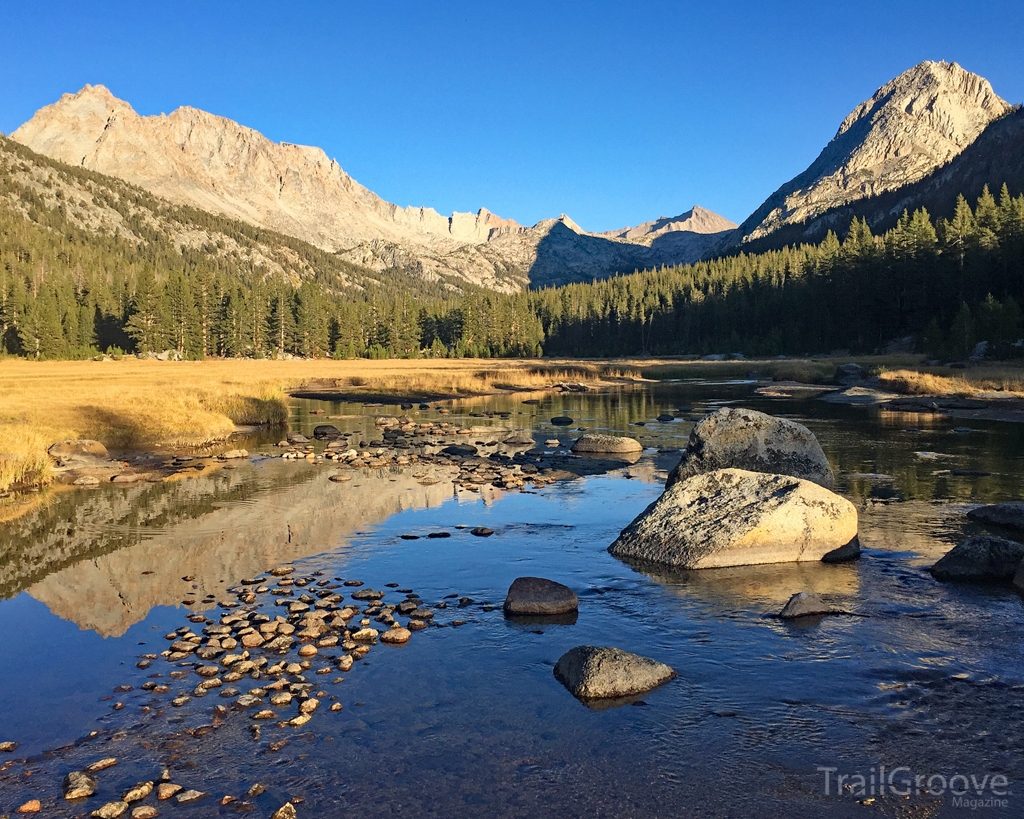 Other options exist though. There are long trails that, while still providing life changing experiences, can be completed in weeks rather than months. In fact, there’s even a “Triple Crown” that can not only be contemplated, it can be accomplished. That’s right, there’s a junior version of hiking’s “Triple Crown.”

Mine began as a bucket list hike. As a guy in his 50’s with titanium in one foot, I didn’t even entertain the thought of the AT, PCT, or CDT. I was looking for a significant adventure though and settled on trying the Colorado Trail. The 486 mile CT shares nearly half of its distance with the Continental Divide Trail and travels through some of the most beautiful scenery of the Rockies. It was a tremendous, month-long experience; everything I had hoped for.

After that trail, I was hooked on thru-hiking, just not the kind that requires six months at a time. In the last year I also completed both the iconic John Muir Trail, and the trail many consider to be the inspiration for the AT, the Long Trail. For those with weeks, not months, available to hike; I recommend them highly. But which trail is the best? It all depends on what you are looking for.

The Long Trail is 273 miles of classic eastern mountains. Much of the time is spent meandering through oaks and maples. Because the trail runs the very spine of Vermont’s Green Mountains, there are a surprising number of big views. Besides the bare peaks of Camel's Hump and Mt. Mansfield, several other mountains crossed are ski resorts in the winter. The cleared ski slopes reveal more scenery than typically found on other eastern mountains. Quite often the views also include a beautiful small town nestled down in a valley. One such spot is Stratton Mountain. It was there that Benton McKaye conceived of the idea of the Appalachian Trail. 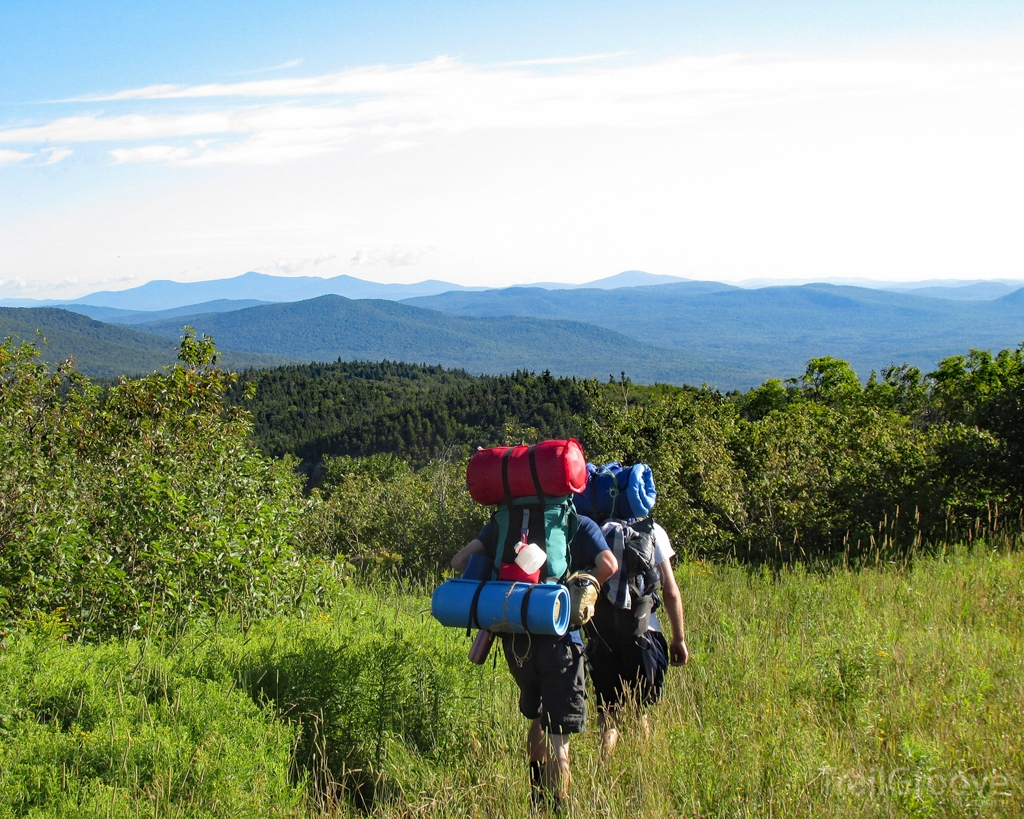 The southern 100 miles or so of the trail are perfect if you are looking for an AT type experience. In fact, for that stretch the trail is shared with the AT. There are numerous shelters, plenty of company and nearby resupply. Once north of the split, the trail is significantly more challenging. The crowds disappear and the hiking gets much more rugged. There were many spots where I found myself climbing ladders or metal rungs drilled into rock walls. There were other spots where I wished there were ladders. More than once I looked at the trail in front of me and exclaimed, “You have got to be kidding me!” Oh, and the famous “Vermud” is a real thing. If you’re looking for a new level of challenge, the Long Trail is for you.

The Colorado Trail is quintessential big mountain hiking. Rather than follow one chain of mountains, the CT crosses eight named mountain ranges, each with its own look. The hike varies between open coniferous forests, aspen groves, high mesas, and rugged alpine passes with views of mountaintops that seem to extend forever. In some drier areas, there are even cacti. While the trail averages 10,000 feet in elevation, the object of the trail is not to climb the peaks, but travel around them. Peak bagging is possible through side trips, but not on the CT itself. 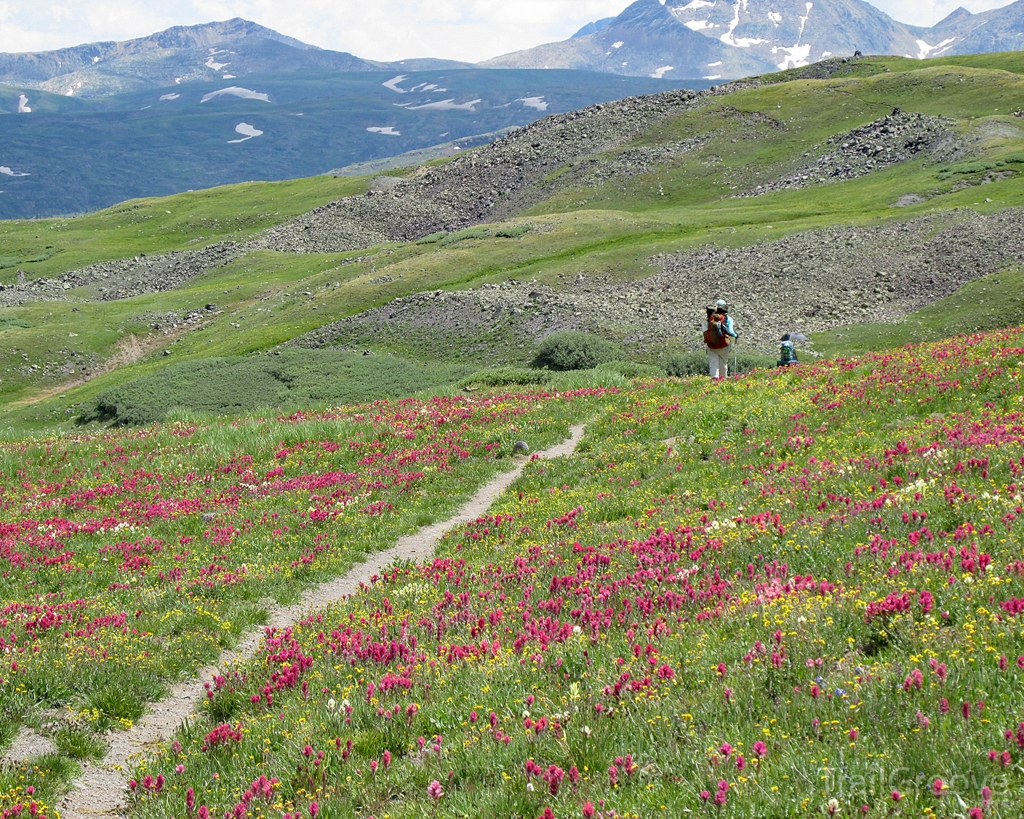 Initial construction was completed in 1987, making it by far the newest trail. Beyond self-issued permits at some of the wilderness areas, no paperwork is required to hike the CT.

Winding from just south of Denver, Colorado to Durango in the southwest portion of the state, the CT is mostly single track without significant mileage on Forest Service roads. There is one (6 mile) section of road walking. Besides multiple mountain ranges the trail winds through six wilderness areas and some of the most beautiful scenery in the Rocky Mountains. The CT shares approximately 235 Miles with the Continental Divide Trail. 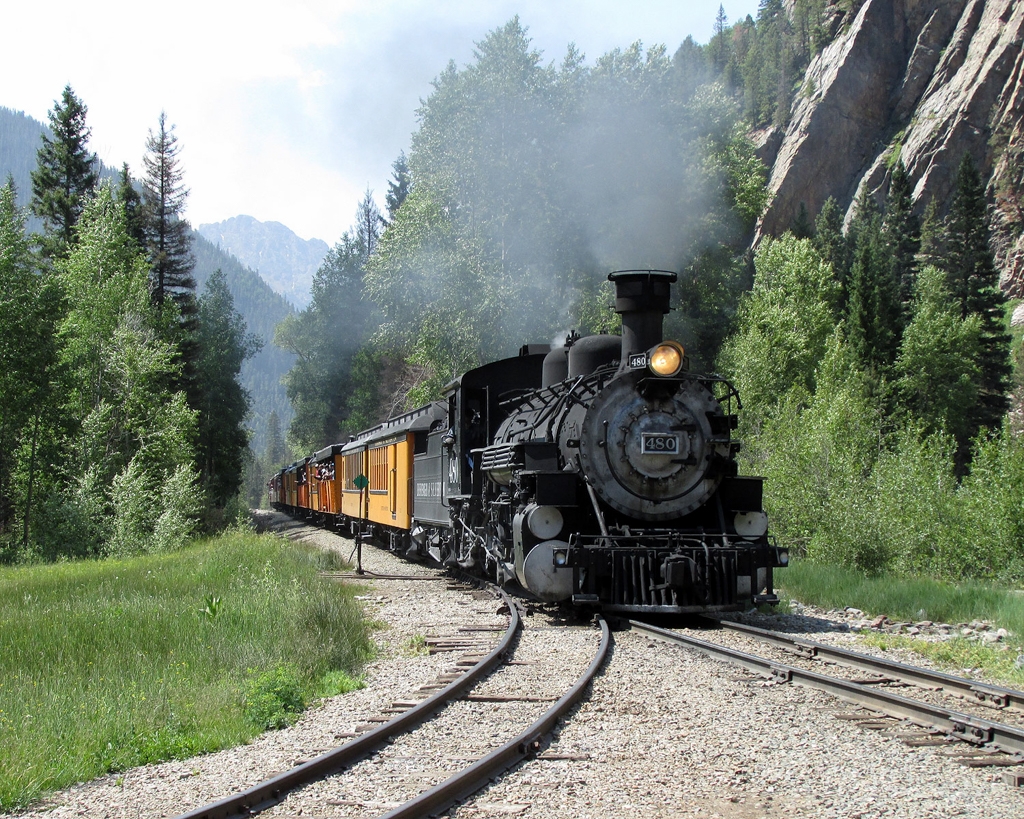 The trail itself is very well constructed and appears to be well maintained. A tent is a necessity as support structures such as shelters are noticeably absent. In my mind a hammock is not really an option due to the trail spending extended stretches above tree line. Altitude is a significant consideration on the trail. With the average elevation over 10,000 feet, snow can remain well into the summer months. Thunderstorms at that height are a real danger.

Hikers on the CT need to be self-sufficient. In the more remote sections there are few other hikers and convenient resupplies can be far apart. I typically hiked 70-100+ miles between town stops.

Wildlife is prevalent on the trail and I saw quite a bit, from hummingbirds, chipmunks, and pika up to big mammals including deer, moose, bighorn sheep, and elk. Marmots were very numerous at higher elevations. There are also black bear near the trail, though I did not see any.

The John Muir Trail should be on every hiker’s bucket list. It is 210 miles of spectacular. The JMT shares 170 miles with the Pacific Crest Trail and by most accounts is the most scenic section of the PCT. Running from Yosemite National Park to Kings Canyon National Park, the trail travels through the Sierra Nevada Mountains to the top of Mt. Whitney, the highest peak in the continental United States. Known for their beauty, the Sierra were called “The Range of Light” by John Muir.

Beyond jaw dropping views of places like Half Dome, Cathedral Peak, Evolution Valley, and the high passes, the JMT is about water. There are beautiful alpine lakes and countless clear streams. Even hiking during the 2015 drought, enough melting snow was left to fill the spectacular rapids and waterfalls that travel down the mountains’ steep slopes. Much of the trail appeared very dry, but water was never an issue. There is only one mountaintop view, but it’s a doozy. At 14,505 feet, the summit of Mt. Whitney is the official endpoint of the JMT. On a clear day, the view goes on seemingly forever.

Potential wildlife sightings on and near the trail were second to none as well. A good portion of the hike is within National Parks after all. All the wildlife normally thought of in a mountain wilderness lives near the JMT. Deer were thick through the lower elevations and seemingly oblivious to hikers. What really stood out during my hike was the close encounters with predators. I happened upon coyote and even a bobcat while on the trip. The multiple sightings of bear left no doubt as to why food canisters are required. 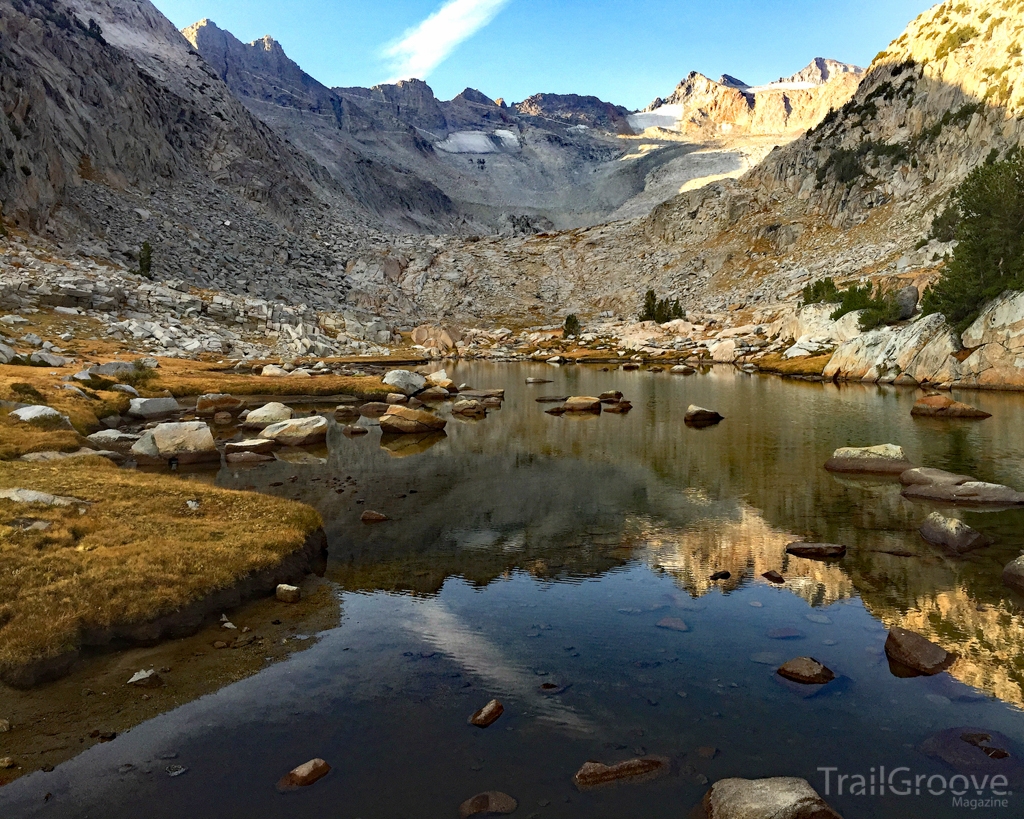 Resupplies get tougher as you travel from north to south. The last relatively convenient resupply option is at Muir Trail Ranch, 110 miles into your 220-mile hike. (Yes, I know the trail is 210 miles, but you still have to get off Mt. Whitney.) Cramming enough food into your bear canister to take you the rest of the way can be a challenge, to say the least.

Like the CT, the JMT has high elevations and big climbs, but both are well constructed with switchbacks when needed. Again, like the CT, you’ll need to rely on your own shelter.

Perhaps the biggest challenge with the JMT is getting a permit. If you want to start at Happy Isles in Yosemite, plan on faxing in an application 24 weeks before your planned start date. By the end of the day, you will find out if you secured a permit. You probably did not. Per the National Park Service website, over 97% of all applications are denied. Prepare to repeat the process the next day with a new starting date and start location options. One hiker I met on the trail had been denied 22 times before she received a permit to start at Happy Isles Trailhead.

Now I fully understand the National Park Service’s position. They have a duty to protect the wilderness from overuse and want to provide a true wilderness experience for those that do receive a permit. I certainly did not want to hike the JMT like I was in a conga line or a parade. Based on my experience, allowing 45 people daily to travel over the JMT’s first pass seemed like a reasonable number. While I saw others at times, it was not constant and I was always able to find a good spot to camp. None of that makes getting the permit any easier, however. You’ll need to plan ahead, yet be very flexible.

In my case, after being turned down a few times, I changed my plan. I was able to secure a permit starting from Tuolumne Meadows, 20 miles down the trail. However, I also arrived at the park a couple days early and day hiked the section I would have otherwise missed. Yes 20 miles is a long day hike, but using park bus service and walking it backwards, it was doable. Was it perfect? No, but it was the only option to walk the entire trail within my timeframe. 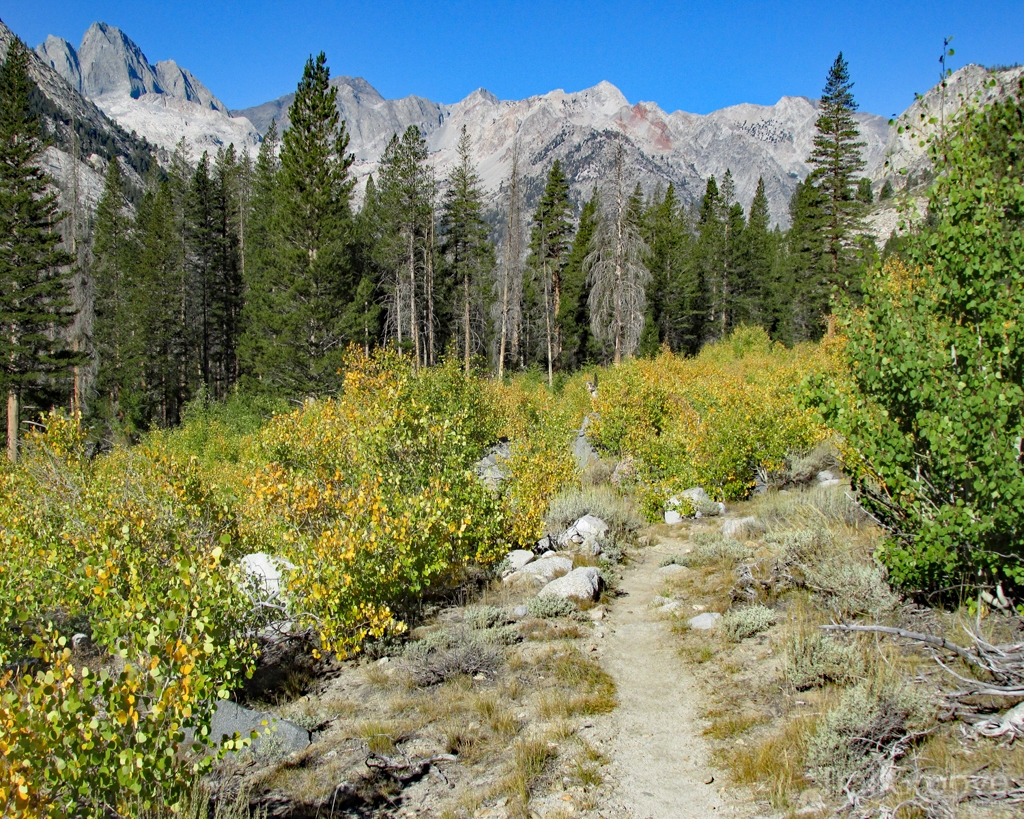 So, if the logistics of a 2,000 mile hike are impossible for you in the near future, don’t fret. There are viable options to still be a thru-hiker. Pick whichever one of the shorter options of America’s three foremost cross-country trails that sounds best to you. Perhaps you’ll get the bug and eventually hike the Triple Crown; just the junior version.


Information: No permits are required to hike the Long Trail though some camp areas and shelters have a $5/night fee. More information is available at the Green Mountain Club.

Best Time to Go: The hiking season for both the CT and JMT is generally July through September. Early season hikers enjoy more wildflowers, stream flows and mosquitoes. At the highest elevations, snow can last well into the summer, and return again early in the fall.

Parts of the Long Trail do not open until Memorial Day Weekend. The “mud season” returns by late October. September would be my choice as the trails tend to be at their driest, bugs mostly gone and the AT thru-hiker wave has passed. Early-mid October brings the added draw of tremendous fall color.

Most hikers attempt to start the John Muir Trail at the Happy Isles Trailhead located at the eastern end of Yosemite Valley inside Yosemite National Park. There are numerous options for both driving and public transportation to and throughout the park.

The southern terminus of the Long Trail is located on the Appalachian Trail at the Vermont/Massachusetts border. The trail can be accessed via the AT by hiking north from the crossing of Mass Rt 2 between Williamstown and North Adams, MA. Another option is the hike the Pine Cobble Trail from Pine Cobble Rd in Williamstown to the AT just south of the Vermont state line.

Maps: There are highly useful Guthook phone apps for all three trails. The Green Mountain Club produces a map of the LT. The Colorado Trail Foundation produces a map and a databook for the CT and many Trails Illustrated Maps cover the route. For the JMT I used the John Muir Trail Pocket Atlas by Blackwoods Press. The JMT Map Set from Tom Harrison Maps is another option.