There’s something puzzling but incredibly satisfying about arriving at an empty trailhead on a sunny Saturday morning during Labor Day weekend. While some national parks are setting records for visitation and crowded campgrounds and packed trails are the norm, I had an entire canyon in the Selway-Bitterroot Wilderness of Montana to myself for 24 hours. Ten miles of well-maintained trail passed through lovely coniferous forest and beside a delightful waterfall to reach four subalpine lakes. This was definitely not a dull landscape or a journey which lacked a worthy destination. But for whatever reason, it was not a trail chosen by other backpackers despite its easy access and prominence in guidebooks. 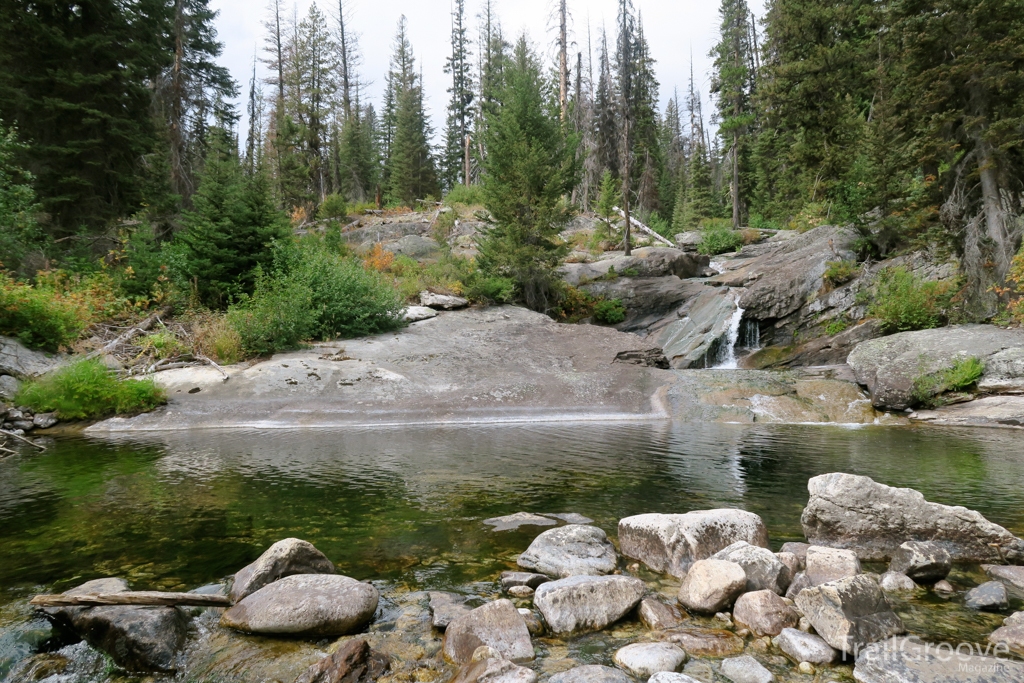 From the perplexingly lonely Boulder Creek Trailhead, it was an easy four mile jaunt to Boulder Creek Falls. I tried and failed to work up the nerve to take a dip in the tantalizing but frigid emerald pool at its base. Instead I merely took off my boots, soaked my feet, read a bit of from a book of William Faulkner short stories, rehydrated, and replaced spent calories. The smoke which had hung in the valley for the past few days had dissipated significantly and I indulged in the sublime pleasure of bathing in the sun and watching clouds drift overhead while my feet rested in the refreshing waters of a mountain stream. Forcing myself not to linger, I topped off my water bottles and continued up the canyon. 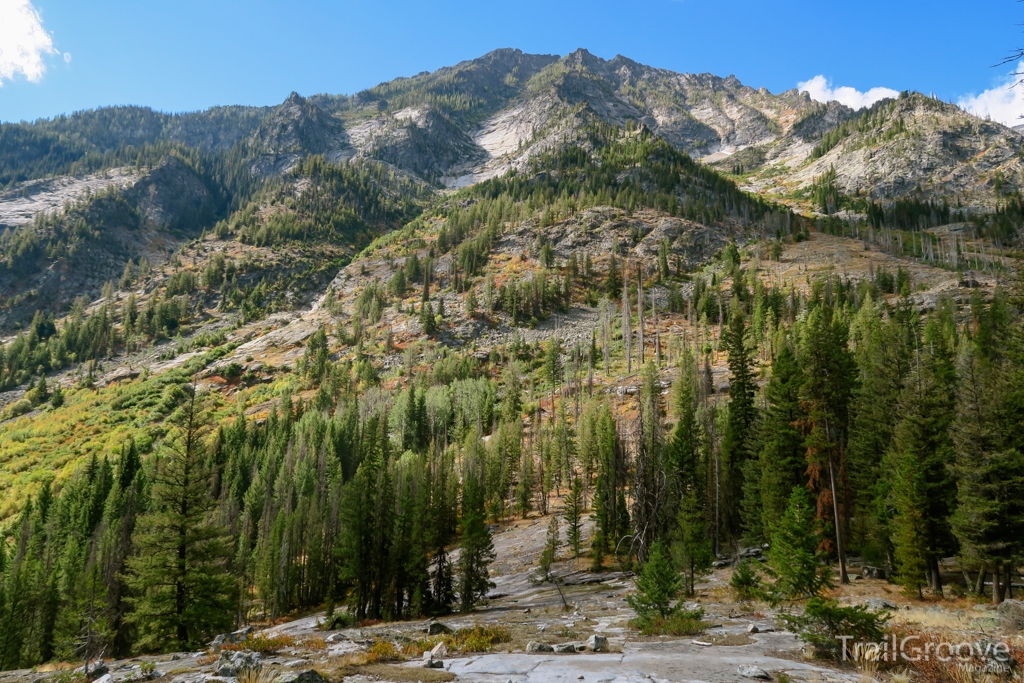 After Boulder Creek Falls, the trail never ceased to accommodate me with its moderate grade and its kindly offering of ripe thimbleberries along several sections. As the trail progressed up the canyon it occasionally exited the shady spruce-fir forest and passed through several clearings, each offering a different perspective on the landscape and showcasing the transition of summer into fall. The verdancy of summer was evident in certain deep green pockets of vegetation, some clinging to distant mountainsides and some flourishing trailside. Aspen and some shrubs were assuming muted colors or hinting at the brilliant yellows and reds that would be their last hurrah before fading into winter.

It was in one of these clearings that I had the incredible luck to see a wolf who was also exploring the trail. When I noticed something moving as I neared the clearing, I paused at the edge of the forest and watched as the animal climbed off the small trailside rock and onto the vegetation shrouded trail. She (given her size, it was likely a female and probably a pup born earlier in the year) came within 20 feet of me before recognizing my presence, pausing for a second, then bounding away. While the picture I took more closely resembles Bigfoot’s thumbprint than White Fang, this was certainly a case where a picture is worth a thousand words. 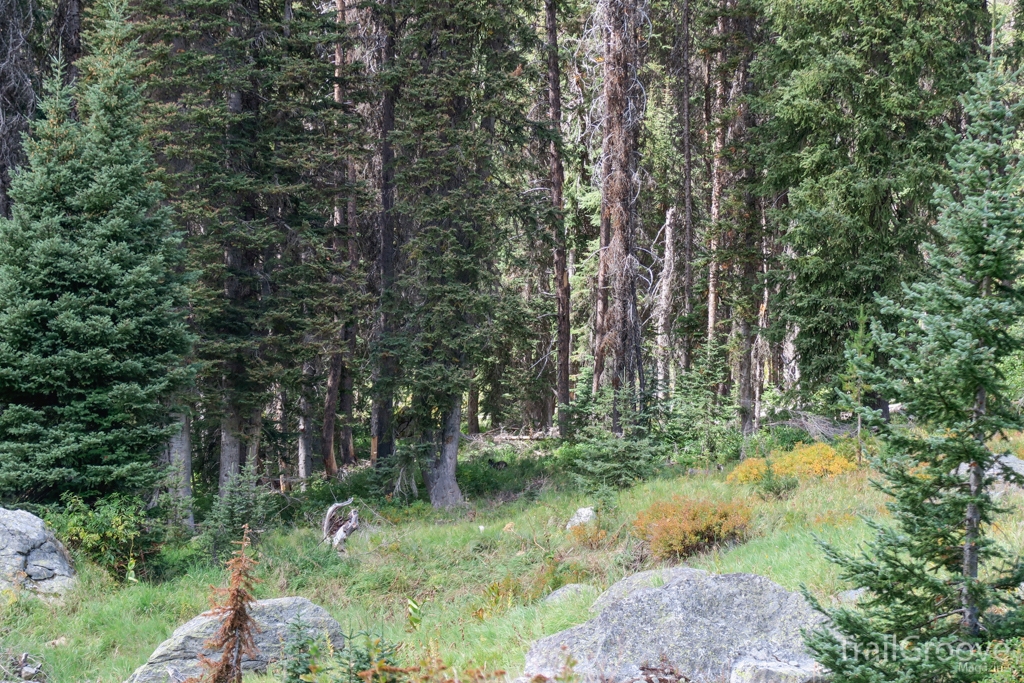 Exhilarated by the close encounter of the canine kind, I continued on the trail – pausing a few times for quick sips of water and to check the map – and didn’t pause again until reaching a small tarn about two miles away from my intended final destination. The shrubs above the lake were turning a warm orange and surrounding stubborn pockets of greenery. Along with the crisp air obtained after almost 3,000 feet of climbing over the previous 9 miles, this setting proclaimed the impending arrival of autumn more strongly than the flora and atmosphere lower in the canyon.

Leaving the tarn, I passed the largest of the lakes on this trip, Boulder Lake, and was greeted – or perhaps warned – by a marmot before beginning a positively brutal ascent to the final two lakes in the Boulder Canyon cirque. Boulder Lake was absolutely stunning and the essence of Rocky Mountain high country scenery. While its expansive and deep waters ringed by forest and hemmed in by granite cliffs and peaks speckled with snow made for an enticing place to spend the night, it seemed a bit overwhelming for a solo backpacker. Akin to sleeping by yourself in a five-bedroom house, perhaps. So I politely passed by the multiple campsites and followed a faint trail for just under a mile, gaining 700 more feet of elevation, before arriving at Lake Crystal, the penultimate lake on my itinerary. Somehow managing to simultaneously admire its scenery and maintain forward momentum, I continued to the last lake where I intended to set up camp. A few hundred feet later I reached the waters of Lake Turbid and set down my backpack. 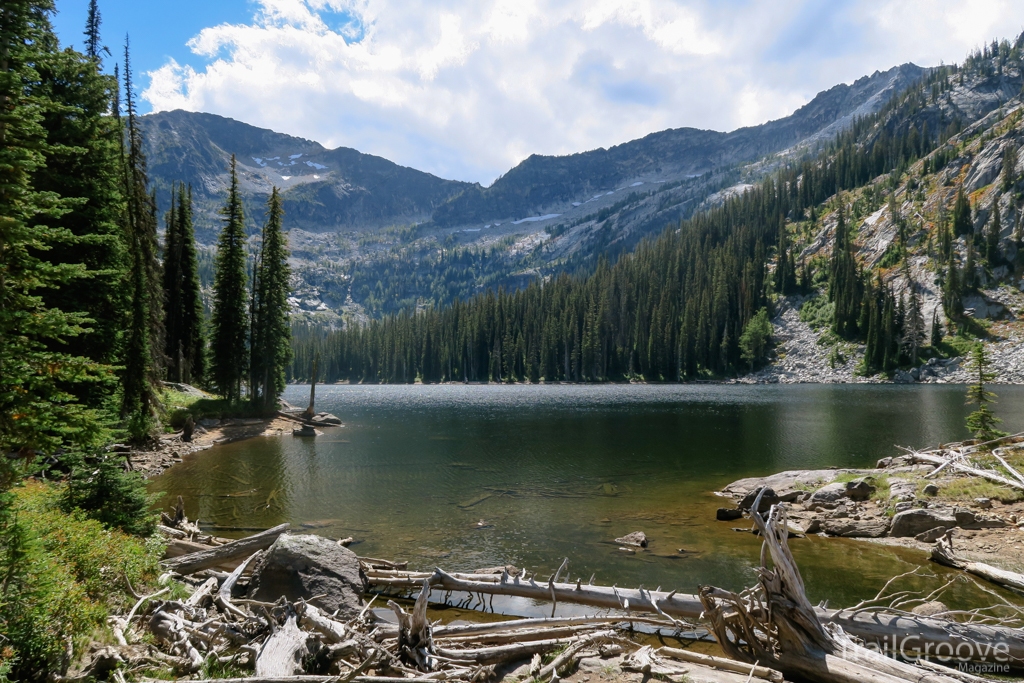 I’d made better time than I’d anticipated, so I took a leisurely stroll up a knoll on the distant side of the lake as a cool-down hike before unpacking and setting up camp. From the knoll I had an excellent vantage point of Lake Turbid and could see Lake Crystal shimmering through the trees, as well as Dollar Lake further below. The serrated skyline of Boulder Canyon’s north rim dominated much of the view and scattered peaks and highpoints near and far offered an almost infinite choice of places to settle my gaze.

After the tent was pitched, water purified, and bear bag line hung I stretched out and let my body rest while I occupied my mind. Picking up where I had left on my lunch break, the short story The Bear by William Faulkner transported me from the mountains of Montana to the backwoods of Mississippi. Once I reached a good stopping point, I set the book down and took advantage of the friendly terrain to circumnavigate the lake. While I don’t always walk around the shore of every lake I camp at, it’s a habit I’ve been trying to establish when the size of the lake and the light of day permit it. I read a bit more upon my return to camp and found myself so entranced in the narrative that I was surprised to realize how suddenly twilight and hunger crept up on me. Stars began to dot the sky their distant luminescence just as I was finishing my hastily prepared dinner. I enjoyed some stargazing and a warm cup of tea before heading to bed around 10 p.m., my breath barely visible in the light of the headlamp as I zipped myself into the sleeping bag. 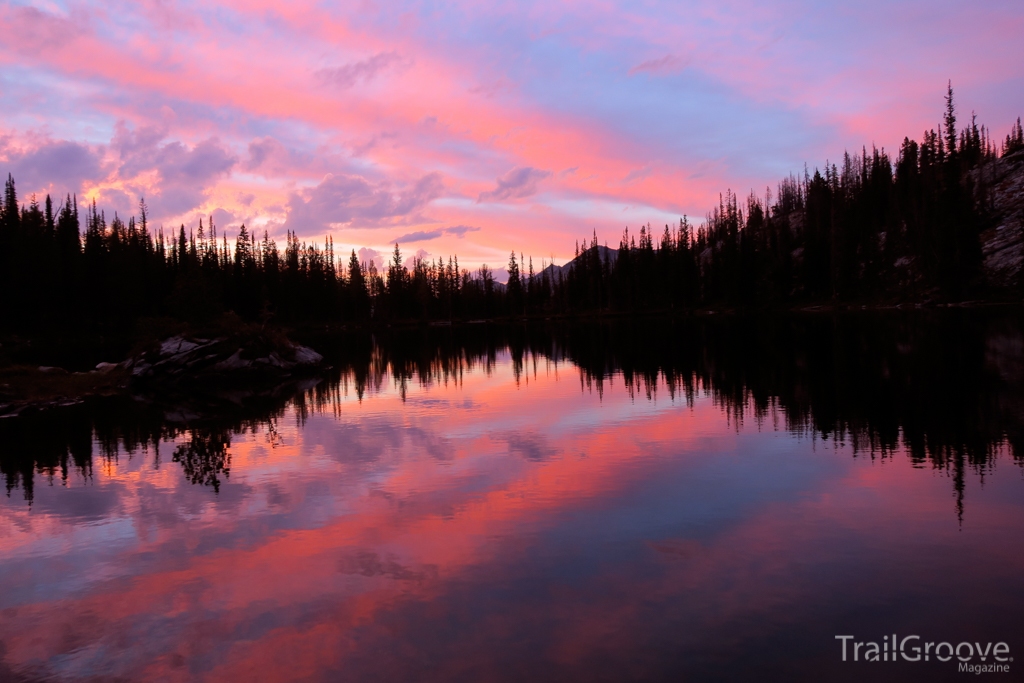 Morning was cloudy and rich with the crisp air of fall. The water in my bottle was frigid when I groggily took a sip in the morning and the tent poles were cold as dismantled them and wrapped them up in the rainfly. Leaving Lake Turbid at 9 a.m, the clouds continued their mission of keeping the sun hidden and the winds were picking up. Despite the somewhat ominous weather, I decided to take a detour around the talus slop of Lake Crystal to get a different perspective on the landscape on my return. The view from this detour, combined with the saturated lighting of the cloudy morning, made it seem like it was a new lake altogether. Once the detour was complete and I was back on its eastern shore, I followed the same route out as I had in. 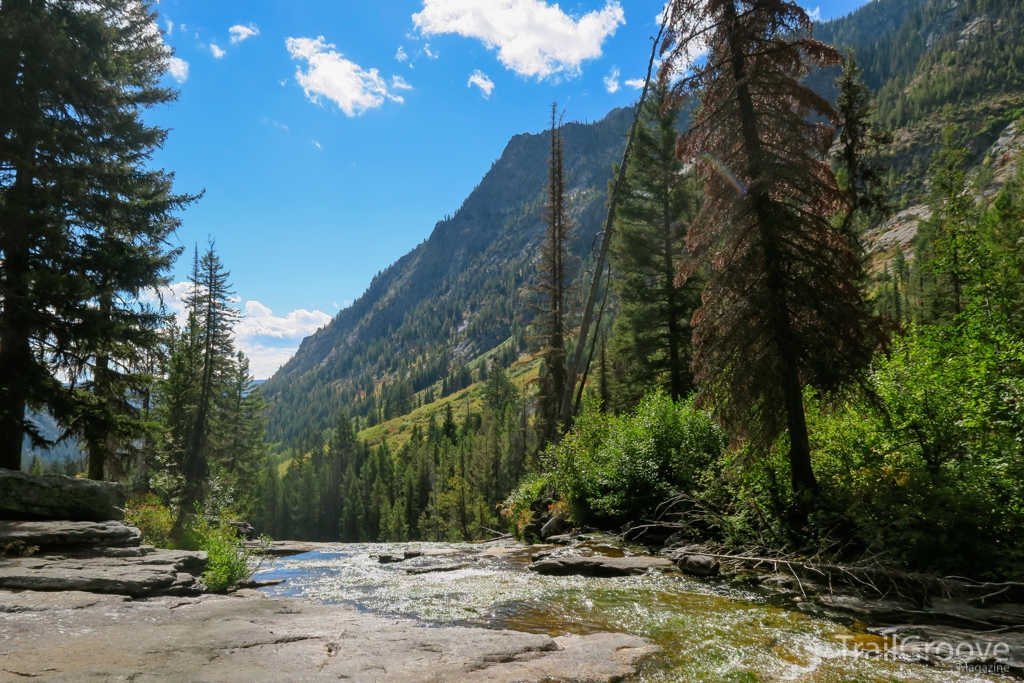 My exit was delayed only by diligent thimbleberry picking and conversation with some horseback riders. As is my habit, I started thinking about my next trip before finishing the one I was currently enjoying. Not exactly the best way to find presence and walking meditation, but it’s something I’m slowly but surely working to improve on. Hiking back toward the trailhead, I casually scanned the high slopes of the southern rim of Boulder Creek Canyon, looking for a way up to Lake of the Rocks, which is noted as being “almost inaccessible waters [that] surely must rank among the Bitterroots’ least visited” according the guidebook Hiking the Selway-Bitterroot Wilderness. I imagine that if and when I make it up to that alpine highlight, holiday weekend or not, solitude will be the rule rather than the exception.


Getting There: Heading south from the small town of Darby, MT on US-93, turn right (west) onto MT-473 (West Fork Road). Take this road for approximately 12 miles and turn right (a sign marks the turn) onto the good gravel road leading to Sam Billings Memorial Campground in about a mile. The road dead-ends at the trailhead parking lot just beyond the campground.

Best Time to Go: In most years this hike is ideal from mid-June to mid-October. There are no major creek crossings, so doing this hike early in the year is possible even if Boulder Creek itself is roaring with snow melt. Fall is a nice time of year, with aspens and larch showing off their colors. As winter comes in, severe weather becomes an issue.