The expression “timing is everything”, occasionally derided as a common-sense platitude, is compelling when applied to backpacking. Hiking along a knife-edge ridge at sunset, watching sunrise from a campsite above timberline, encountering wildlife unexpectedly, getting the tent pitched at the last possible minute before a storm – meticulously planned or completely serendipitous, such moments are part of the thrill of backpacking. The physical act of backpacking, simply walking with a burden of gear and food attached to one’s body, is objectively not an “extreme” endeavor, but many of the scenes witnessed by us are nothing short of phenomenal. 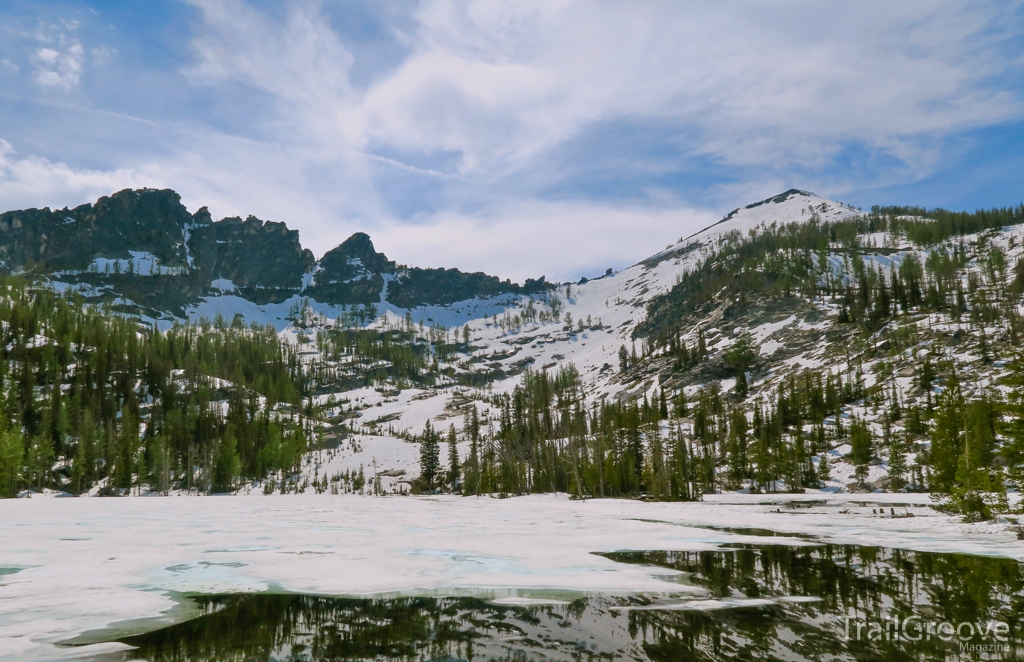 Seasons, by definition particular times of year, are one of the most common qualifiers used to describe backpacking trips. Fall in New England, summer in the Rockies, springtime in the Southwest. These combinations of time and place are all that it takes to conjure up images of quintessential scenery to most hikers. Backpacking at the height of each season can feel like a journey through the absolute essence of a natural cycle. Rebirth, vibrancy, fading away, and dormancy. 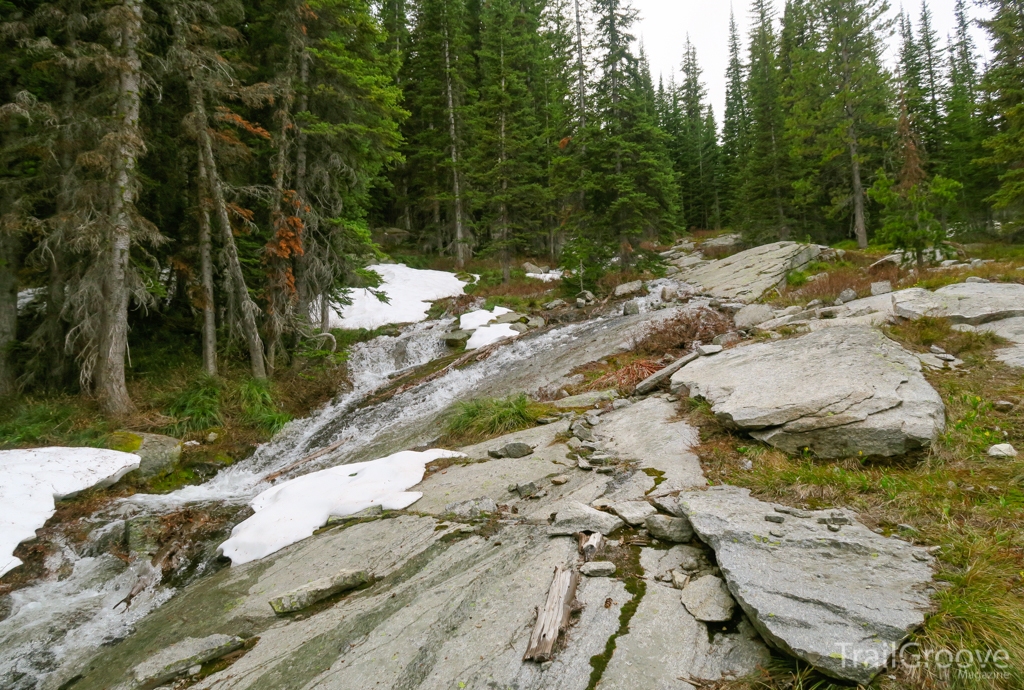 After slowly becoming familiar with the terrain and timing of the Northern Rockies, I’ve began to embrace the magic and ephemera of landforms during the in-between seasons. Without a doubt, the early summer ice-out of high country lakes is one of the most surreal and rewarding of the fleeting transition and dramatic changes from one distinct season to another. Recently unfrozen water lapping against the shore as well as sheets of ice covering the lake is a mesmerizing sight to behold.

Varying with elevation, latitude, severity of winter, and the unique aspects and exposures of individual lakes, ice-out in the Bitterroot Mountains of Montana begins earnestly in the second half of May and continues through June. Visiting at least one high mountain lake when its ice is just beginning to melt is on my annual and continually growing backpacking “to do” list. Watching ice recede further from the shore while wearing short-sleeves and whiling away an afternoon drinking tea and reading is a sublime pleasure. 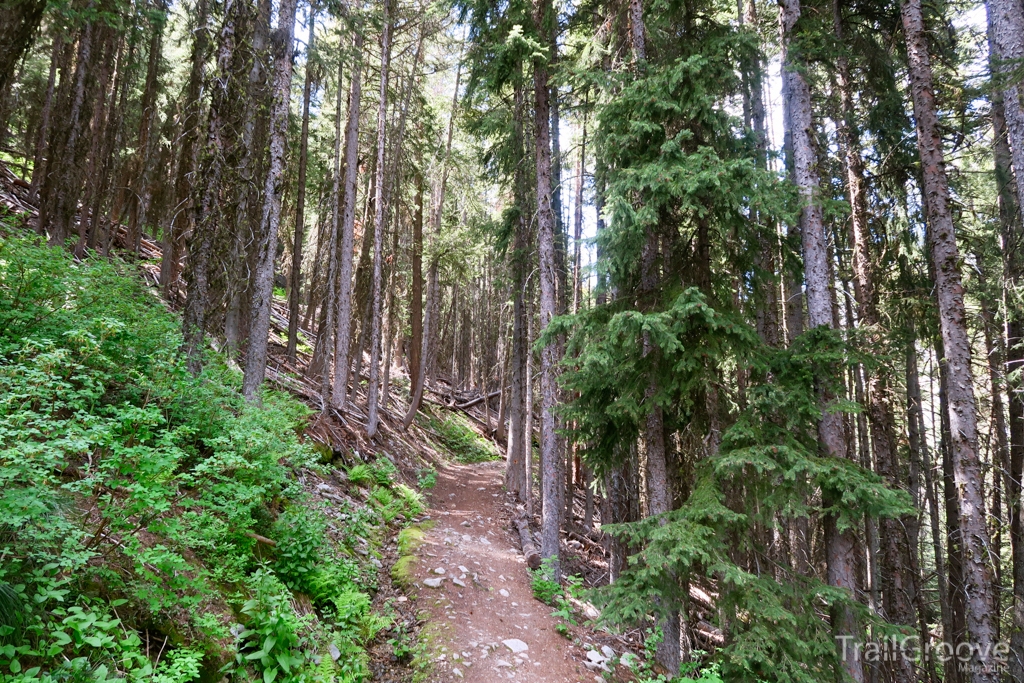 While it might seem to be about as entertaining as watching paint dry, I’ve found that the setting is an excellent one in which to more easily ponder the concept of geological deep time and experience an exaggerate microcosm of glacial pacing. Hearing the gushing of snowmelt swollen inlet streams, looking at craggy ridgelines ringed with snow and still pockmarked with ice formations, admiring the perfect level surface of a partially ice-covered lake; all with temperature swings of 50 degrees likely within a 24-hour period. When extrapolated from the local to the global, the present to the past and to the future, postcard scenes become as profound as encyclopedia entries.

The first of three lakes I visited on a recent overnight trip to enjoy prime ice-out conditions was an unnamed tarn that I reached after an hour of motivated hiking. Completely melted and with patchy snow around its shores, its waters reflected the blue sky above and the talus slope on its southern shore with mirrorlike precision. Pressing on towards the highest lake and the one I intended to camp at, I swatted mosquitoes, admired wildflowers, and tried to keep my feet dry when crossing the numerous melt-water streams. 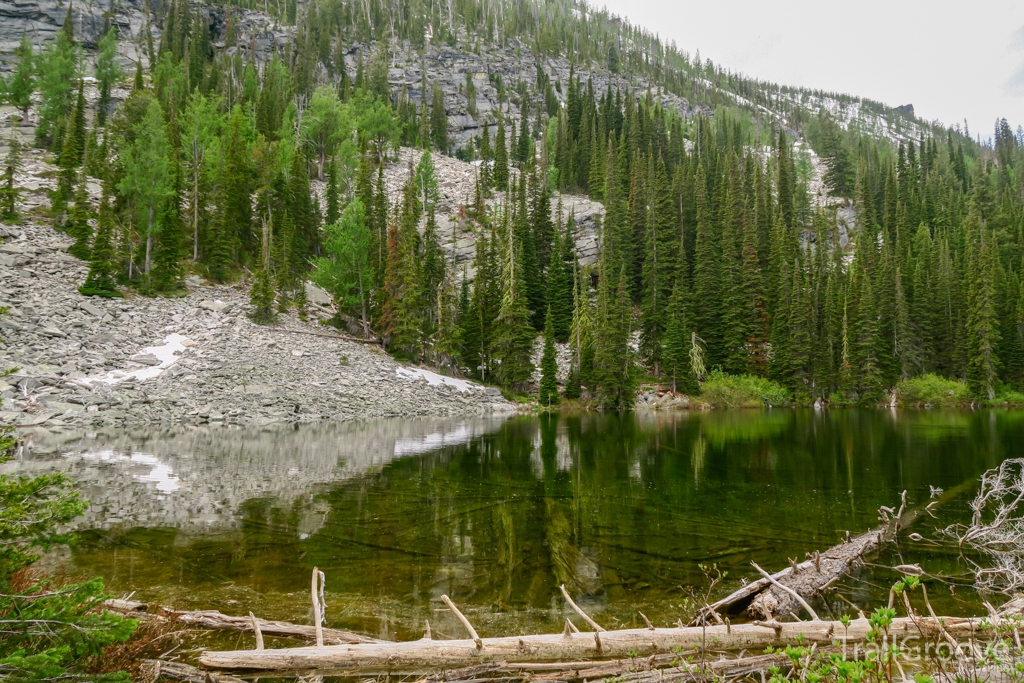 Reaching Kidney Lake, I was treated to a stunning lakeside panorama of a lake that I’d been to three times before but which seemed to be a totally different place. The remaining ice and snow both muted and amplified features of the lake. The background noise of a waterfall on the inlet stream provided a soundtrack that would slowly fade away in the coming weeks as the snow that fed it melted away. I had hoped for successful ice-out fishing, but neither the trout below the lake’s surface or the two I spotted in a pool in the outlet stream were interested in the flies I tossed onto the water.

Although several feet of snow persisted around the shore of the lake, I was able to find a spot with dry ground for my tent and an adjacent snow-free area to cook. The “dining room” of this trip featured a breathtaking view of the crags and a peak above the lake, with a small channel of open water at my feet before it turned into a sheet of ice stretching across the lake to the base of the slopes that stretched upward to the aforementioned attractions. A delicious meal of pasta, tuna, spinach and mushrooms warmed me up as the sun set and a chilly night that would stall any continued melting descended upon the lake. 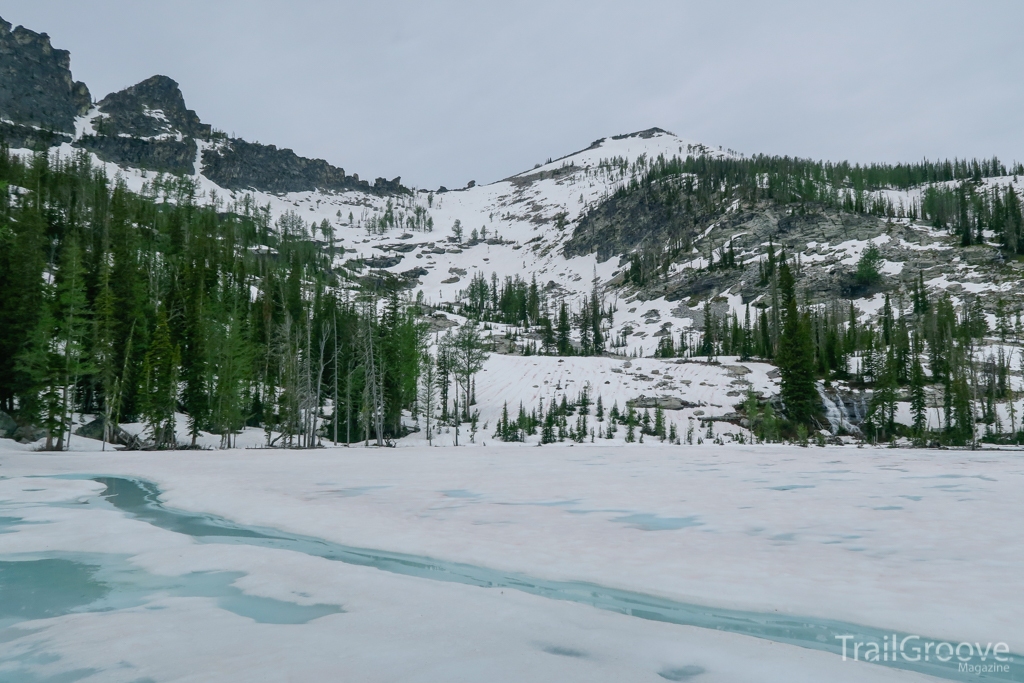 During consumption of coffee the next morning, I was treated to watching the rays of the rising sun wash across the white and ice-blue canvas of the lake. Not wishing to leave anything left unseen, I made a detour to the far side of the lake to enjoy a closer view of the waterfall before making the short trek to Camas Lake. The third lake of my trip, Camas Lake had already completed the “defrost” cycle that Kidney Lake was in the midst of.

Only 500 feet lower in the cirque and barely a half-mile away, the contrast was astounding. Almost totally ice free, aside from a few small floes, Camas Lake provided a true taste of summer in the Northern Rockies. A few fish snatched bugs from the surface of the water, but avoided the various flies I tossed their way. However, moving around the lake the action was much better and several gorgeous cutthroats were hooked, landed and released. 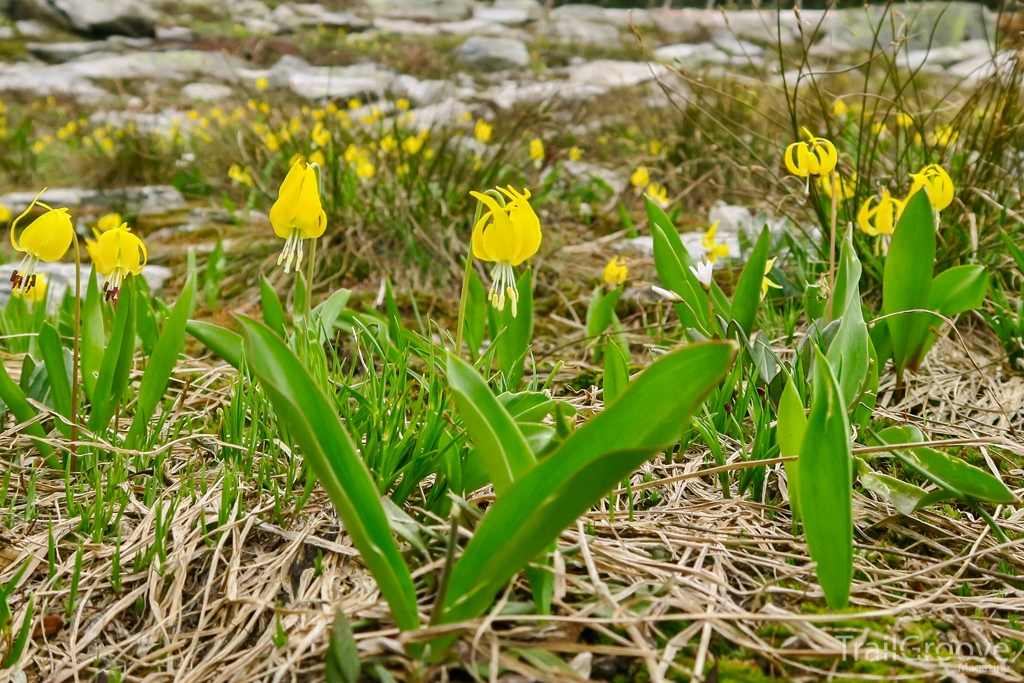 As the fishing waned later in the afternoon and a thunderstorm brewed to the west, it seemed like a good time to begin the pleasant downhill jaunt to the trailhead. Two crossings of rushing streams served as reminders during the warm but mostly shaded hike that summer, with its more moderated stream flows, ice-free lakes, and snow-free mountain passes, was still a few weeks away. I couldn’t help but smile knowing that while I’d have a few months to enjoy the summer hiking conditions favored with good reason by backpackers, I’d also perfectly hit the narrow window of opportunity for experiencing enchanting and crowdless pre-season scenery.