It's an early December afternoon in Yosemite National Park, and I'm watching a bobcat padding down the trail in front of me. In his mouth is a lifeless gray squirrel, so large that he drops it several times. He turns and surveys me with the lazy arrogance of a house cat who's proud of his kill. I'm unsure if I should be following this wild creature down the trail. I think of how animals are protective of their food. Still, the large cat and I are headed the same way, so I continue at a distance. Eventually he turns off the trail, and I draw closer and look up the embankment where he stands. The bobcat and I both freeze as a large, shaggy brown bear appears from around a rocky outcrop behind him. The moment slows, the sight too surreal. Then the bear spooks and disappears as suddenly as he appeared. I look around in search of other witnesses, but there are none. 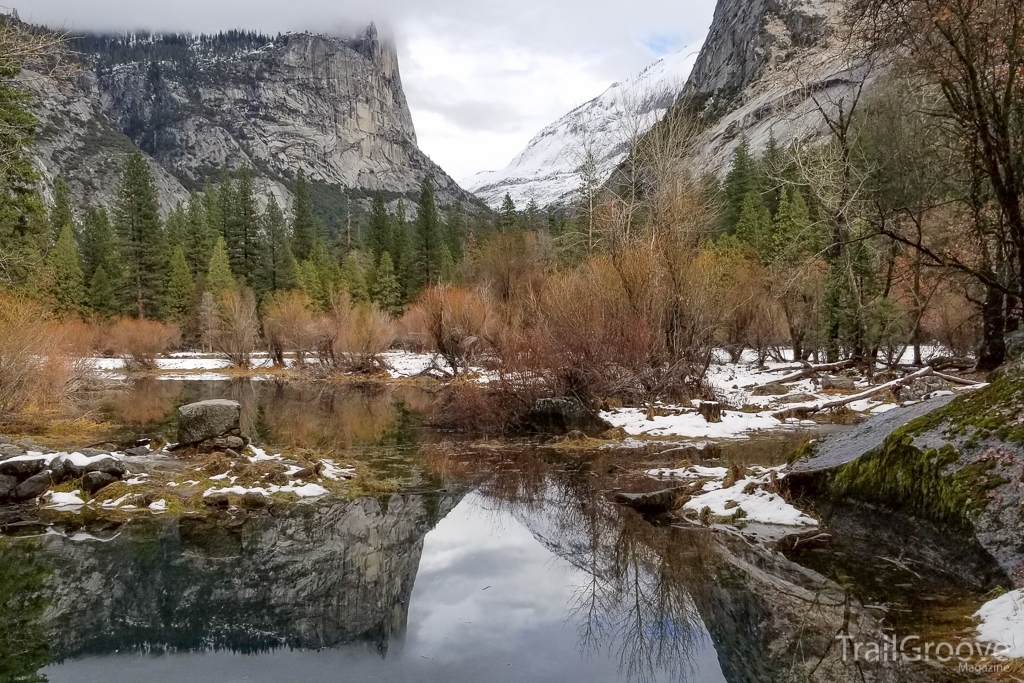 As a woman, so many different people in my life told me that I shouldn't be in this wild place alone. My mother. My friends. Various family members, and various strangers. From the man that rented me the car to the lady that shuttled me from the airport. These encounters filled me with wonder. Wonder and gratitude at the kindness and compassion of strangers, but also wonder and frustration at the fear that blooms around a woman walking alone into the woods. Eventually I just stopped discussing my trip with strangers.

Back in Yosemite Valley the morning after the bear, I walk along Sentinel Meadow. Three coyotes lope through the mist that rises from the snowy grass. Beyond the winter-worn trees ahead, the granite walls of the North Rim loom over the valley, broken by the ribbon of Yosemite Falls. Today I will ascend to the top of these falls, the tallest in North America. The trail to Upper Yosemite Falls is one of the oldest and most iconic in the park, but on this chilled morning it appears abandoned. The bottom half of the trail is crisp but clear, the views expanding around every rocky switchback. Half way up the cold settles in, covering the granite in slick hard-packed snow. My progress slows as my feet slip continuously, too unwilling and fingers too cold to dig my microspikes out of my pack. By the time the trail levels out at the top, I've entered a pristine winterscape. I follow the footprints left by the intrepid before me, wishing to keep the snow out of my shoes and the trail under my feet. The sound of falling water grows, and the hill crest ahead reveals nothing beyond but fog. I've made it to the falls, but I must travel down two snowy switchbacks to the cliff's edge to see it.

The first switchback bellies right up to the top of the falls, the pooled water disappearing ominously over a 2,425-foot cliff. As the trail turns, I'm faced with a snow-slickened rock ledge, hardly wide enough for one. Beside it, a single metal rail of unknown age and integrity protrudes from the cliff wall. Here I wait as a couple passes single file, the three of us clinging to the rail like a lifeline. It is my turn, and I descend carefully like a cat on a window ledge. I step down to the empty viewpoint and the expansive sight of Yosemite Valley from the top of the falls. Exhilaration washing over me like a wave, I can hardly believe I have this moment entirely to myself. 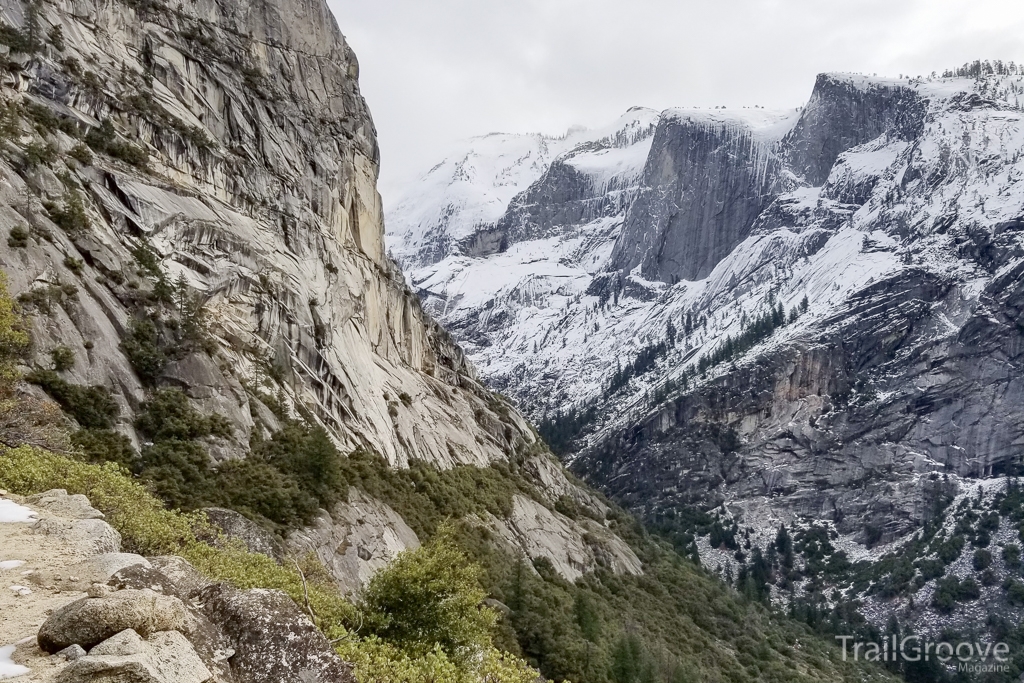 I savor the experience for as long as I can, but standing still eventually lets the cold creep in. I wrestle my traction onto each shoe with stiff, clumsy fingers, then shove my gloves back on. Continuing to Yosemite Point is literally walking through clouds. Up this high, with the ground cloaked in snow and the mists swirling around me, the entire world is winter white. The silence is both peaceful and eerie, broken only by snow falling from branches and the occasional ice break down Yosemite Falls behind. I cross Yosemite Creek on a wooden bridge, snow covered and adorned with shimmering icicles. The trail is now a suggestion, a slight flattening out of the drifts. I know for certain I'm alone out here; the only tracks those of deer and birds. I think back to earlier this morning in the valley below, snapping photos of El Capitan and the Three Brothers near the Merced River. I came across bear prints so fresh, I checked over my shoulder for the animal that left them. Picturing the harsh gashes left by its claws, I shudder and hope not to see those here, or worse, cougar prints. The many warnings bestowed upon me creep back in, and my complete solitude suddenly feels heavy. But I've come this far and worked this hard, all these miles of climbing, feet slipping, thighs and lungs burning. These doubts are not even mine; I've only borrowed them from others. I dismiss them and forge ahead. 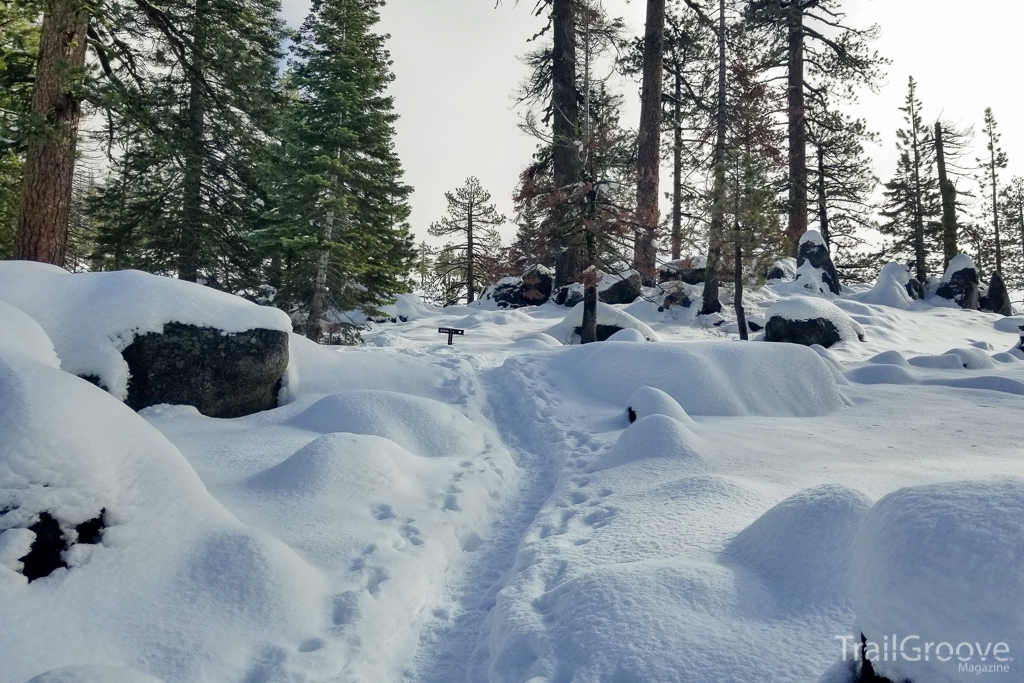 Finally, the trees fall away, and then the world falls away as I approach the ancient metal railing of Yosemite Point. There are many more famous, more photographed, more sought-after views in this great valley. But this is my view, my precipice that no other dared adventure to in this untouched snow. Down below is the park in miniature, the silver road looping through, and out beyond are the looming walls and frosted peaks of the south rim. These are memories I know I'll carry forever, standing here grinning and heart pounding, just a woman alone in the woods.

Information: No permit is required for day hikers, though all visitors to Yosemite National Park are charged an entrance fee. Wilderness permits for Yosemite Wilderness are required for overnight stays.

Best Time to Go: Views of the waterfall are most impressive during the spring and early summer, when the falls are at their peak from winter runoff. The trail to Upper Yosemite Falls is open year-round. Traction and hiking poles are recommended during the winter months, however, when parts of the trail are covered in snow and ice. While most of the trail is not exposed, falling rocks and ice are a potential hazard. Climbing down to the lookout at the top of the falls is exposed and requires extreme caution when the path is frozen.

Getting There: From the park entrance, follow Highway 140 for 6.5 miles until the road splits. Keep right and follow Southside Drive, turn left onto Sentinel Drive, and left again onto Northside Drive, following signs for Yosemite Lodge. Park anywhere around Yosemite Village or Yosemite Lodge. The trailhead is located behind the lodge at the Camp 4 area. The hike to Upper Yosemite Falls is 7.2 miles roundtrip. To continue to Yosemite Point, follow signs east towards North Dome. This adds another 1.6 miles to your hike. Those looking for an even greater challenge can head west from the upper falls to Eagle Peak, the highest point on the north rim, adding another 5.8 miles roundtrip.

Maps and Books: The National Park Service’s Yosemite Valley Hiking Map details the hike to the upper falls as well as Yosemite Point and Eagle Peak. National Geographic also offers their Trails Illustrated Topographic Map of Yosemite. For further reading, Hiking Yosemite National Park: A Guide to 61 of the Park’s Greatest Hiking Adventures offers a thorough guide to this hike and many others in the Yosemite Valley, while providing information about safety precautions, logistics, and other trip planning information.