I collect hidden places of refuge in the wilderness. At least once a year I retreat to one of these havens to renew my spirit. These spots have a few things in common: They are off trail, deep in the wilderness, difficult to get to, and a delightful surprise when first discovered. And, when I am there, being alone feels exactly right.

Deep within one of California’s coastal mountain ranges in the Ventana Wilderness, one such location is a sandstone cave at the base of a large rock outcropping that rises several hundred feet above the surrounding terrain. One of the few good trails through these mountains passes within a mile of the cave. Before I knew about the cave, I had always wanted to find a route to the outcropping. I enjoy scrambling over rocks when the climbs are difficult but not life threatening. These rocks were so inviting I was sure people must have beaten a use trail to them. 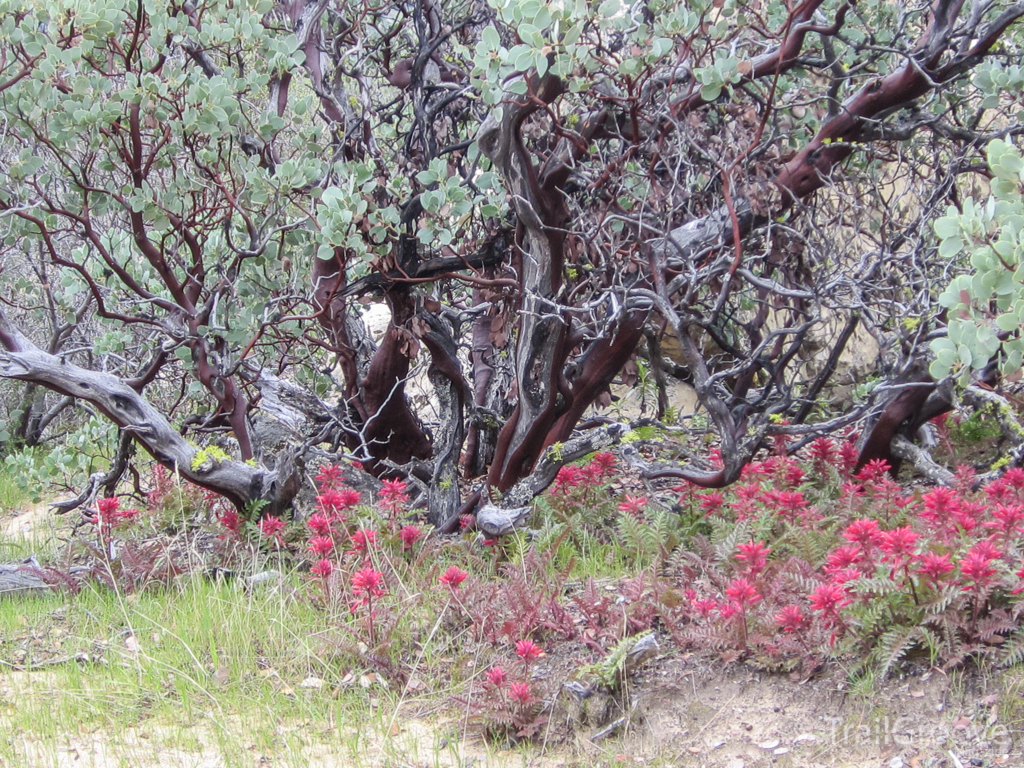 One day I went out looking for a route to the outcropping. From the main trail, I took a poorly maintained trail that led in the direction of the rocks. At the point on the trail closest to my destination, I was separated from the rocks by a deep, steep-sided ravine. This is where I thought I would find a use trail, but there was no sign of one. I went farther down the trail but never saw a sign that anyone had ever crossed the ravine. I decided to cross, even though both slopes were covered in dense chaparral and thick mazes of poison oak. Having reached the other side, I tried working my way back toward the large outcropping, but going was slow, and I eventually gave up. As I fought my way back to the trail, I considered my options for my next assault. The best part of this failure was the discovery of smaller rock features that the elements had carved into dreamscape of fantastic shapes. 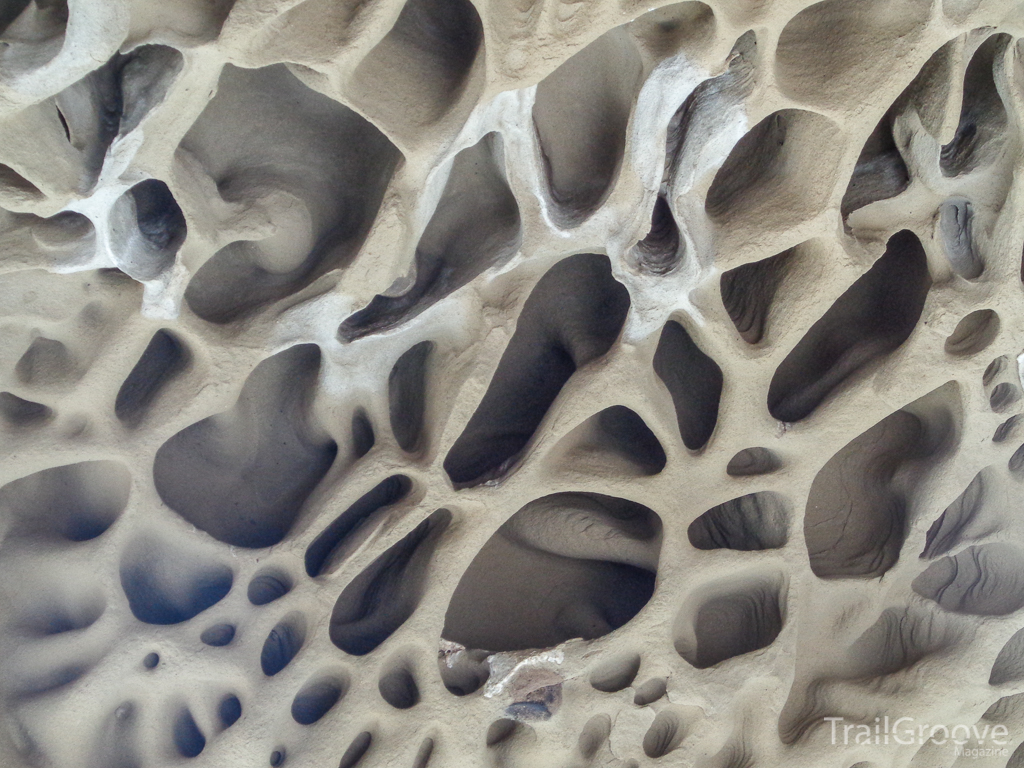 As I was leaving the wilderness, I stopped at a high overlook about a mile from the rocks and looked back. It appeared that much of the other side of the ravine, upstream from the rocks, was open forest. If I went around the top end of the ravine maybe I could traverse the far slope all the way to the rocks. The following year I tested this idea. It wasn’t as easy as it had looked. I hadn’t noticed a side ravine coming down from the mountain that cut across my route. It was steep and choked with brush and thorny vines at the bottom. On the other side it was thick chaparral all the way to the outcropping. I finally arrived at the base of the monolithic rock formation in mid-afternoon, hot, dirty, lacerated, and happy.

I rested on a sloping sandstone surface and looked around. The terrain here was more open, and I saw I was surrounded by surreal rock shapes. Some looked like a cupped hand reaching up from the underworld. Some had small caves. Others were covered in a complex lattice work of ridges and cavities. I walked toward the rock face that rose steeply above me. I crossed a small, mossy stream that trickled from pothole to pothole. I climbed the other bank and entered a grove of trees, and, out of nowhere, there it was. A beautiful cave. I knew at once that I would return here many times. 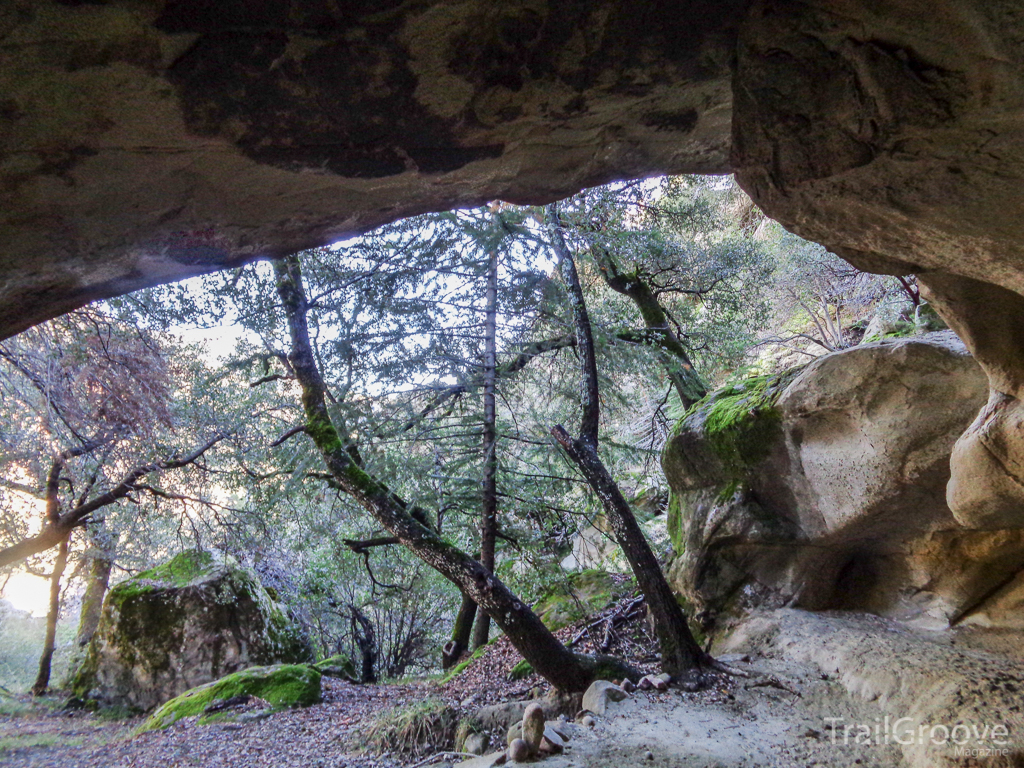 The cave resembles a large bedroom with half of one wall missing. The walls are sculpted in flowing shapes resembling abstract sculpture, but the floor is flat, dry sand. There is a boulder near the entrance that provides a convenient surface for cooking. In one corner is a small fire pit. Smoke has an opportunity to exit the cave through a small hole in the roof of the cave. Even better, a rock overhangs the hole so that the smoke can leave, but rain cannot enter. I settled in. After unpacking, I drew water from one of the potholes and filtered it.

The cave is only visible when one is standing directly in front of it. At night, light cannot be seen from anywhere in the surrounding wilderness, offering an atmosphere of security and contentment – as though nothing can harm you, and no one in the world knows where you are. The next morning I cooked breakfast on the cooking boulder and carried it across the stream to a place I have come to think of as the breakfast nook. It is a gently sloping sandstone slab backed by a large scooped out stone shaped like a band shell. This spot gets the first morning sun as it rises over a mountain three miles away. In the stone surface are several rounded holes the size of softballs. This is where the people who lived here earlier ground acorns into meal. When the first aboriginals found the cave, they must have felt even luckier than I do. Native Americans are believed to have survived in this valley into the mid-1800s, long after other tribes had been subdued by the Spaniards. 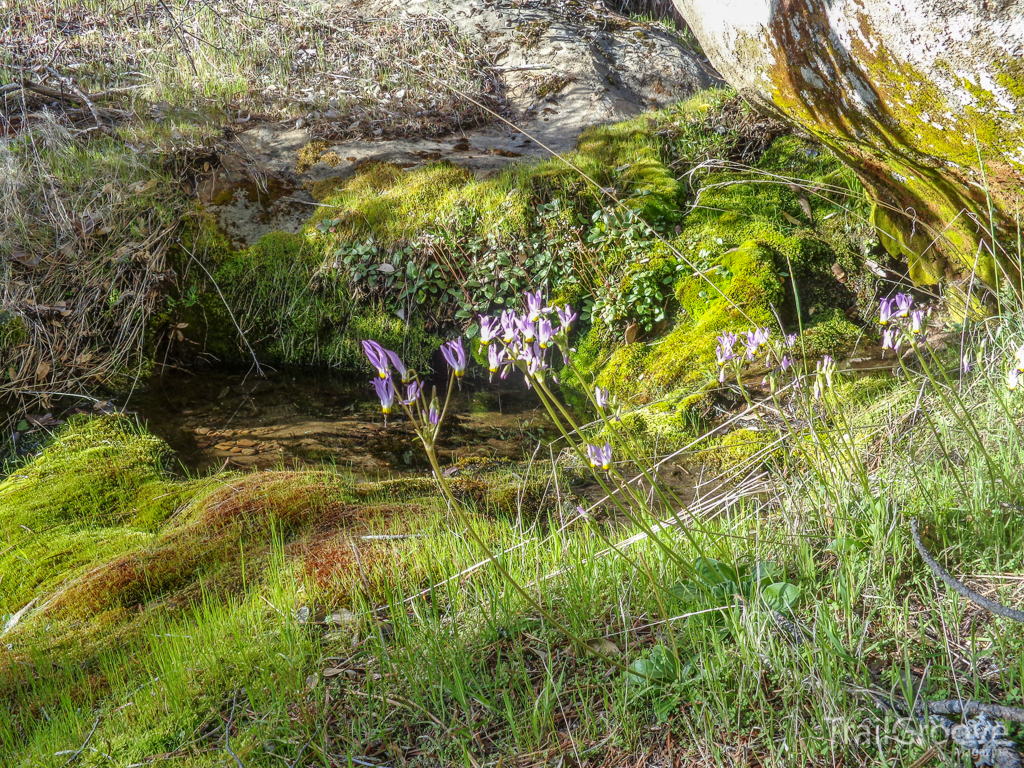 I spent the next day exploring the surrounding fantasyland. Extraordinary shapes were everywhere. I went far up into the outcropping and around its base as far as the chaparral would allow. I found a number of smaller caves, four of which would comfortably sleep one or two people. That evening, I found it easy to imagine sitting there with a group of the original residents. Someone would have said, “This is perfect! How did you find this place?” It is sad to feel their presence and yet know that they will never return. They must have been so happy here. A stay here doesn’t feel like moving into an abandoned home; it feels like house sitting for good friends. When I left the next morning, I found a much shorter route through the rocks and bushes, directly across the ravine, and up to the trail. It was still a hard climb with a full pack, but it took only about 15 minutes.

I return often. I spend my time exploring, looking for new rock shapes. I gaze out across the mountains during the day and up at the stars at night. I read, write, and meditate. I am not terribly introverted, but I am comfortable being alone. A visit to the cave always restores my equilibrium and clarifies my judgment. In any wilderness, step off the trail – even if it’s just a mile or two, and there’s no telling what you might find. Chances are however, that someone has walked those paths before you. Hopefully we can all find our own retreat and spot to return to year after year, whatever and wherever that might be.

Information: Many trails and the roads to trailheads are closed as a result of the wildfires of 2020 and the rains of 2021. The Monterey Ranger District can also give you up-to-date information by phone: (831) 385-5434.

Getting There: As of February 2021, only two trailheads are accessible, and they are both off of Hwy. G16 in Carmel Valley. Cachagua Road 5, miles southeast of Carmel Valley Village, goes to the beginning of the Carmel River Trail at Los Padres Dam. The first mile is difficult and parts of it are overgrown. Another 7 miles takes you to Tassajara Road, which passes the start of the Pine Ridge Trail. This trail is in good shape and leads to several other trails. Tassajara Road is never in good shape, but usually does not require 4-wheel drive.

Best Time to Go: Weather is good in mid-spring and so are the wildflowers. Early fall is also pleasant. Winters can be rainy, and summers are hot with biting flies.