With limited time and a good forecast, Jen & I decided on a quick overnighter a couple weeks ago close by in the Winds. It would need to be a quick trip - Obligations (A bit more on that later) would have to keep us close to civilization, and on top of that we would have to work with a later start on Saturday. 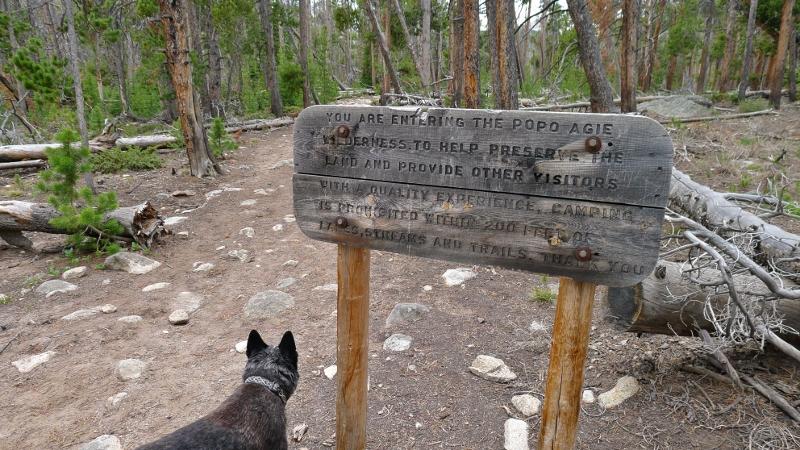 Our plan was to take the Stough Creek Lakes Trail into the Popo Agie Wilderness up to Roaring Fork Pass / Stough Creek Saddle, then retreat part of the way back to make camp. The next day would be a quick start, through the woods and back to the trailhead.

Saturday we made the quick drive up to the trailhead at Worthern Meadows Reservoir, ascending from about a mile high to 8800 feet. As we drove upwards through the switchbacks rather ominous clouds were seen amongst the peaks above, and it began to rain just as we pulled into the parking lot and began to shoulder our packs. We were however, in luck. As we made our way through the pines, the sun came out and you began to find yourself wondering why you don’t get out twice as much as however often you do now. The trail started out easily enough, and we wound our way through the National Forest and quickly reached the wilderness boundary.

We then made it to Roaring Fork Lake, where the trail runs across the lake’s outlet stream, ford required. The stream was thigh-high deep and slow flowing, but numbing cold and wide enough that you can’t just rush across in a few steps. 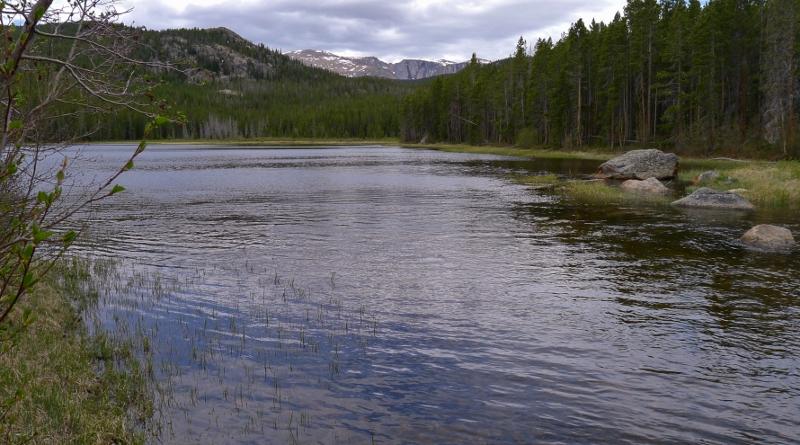 Once across the trail began to ascend in elevation, until we made it to a marshy area about 2 miles in at 9500 feet. Surprisingly, a seriously well-constructed boardwalk led across the marsh, so our feet stayed dry. 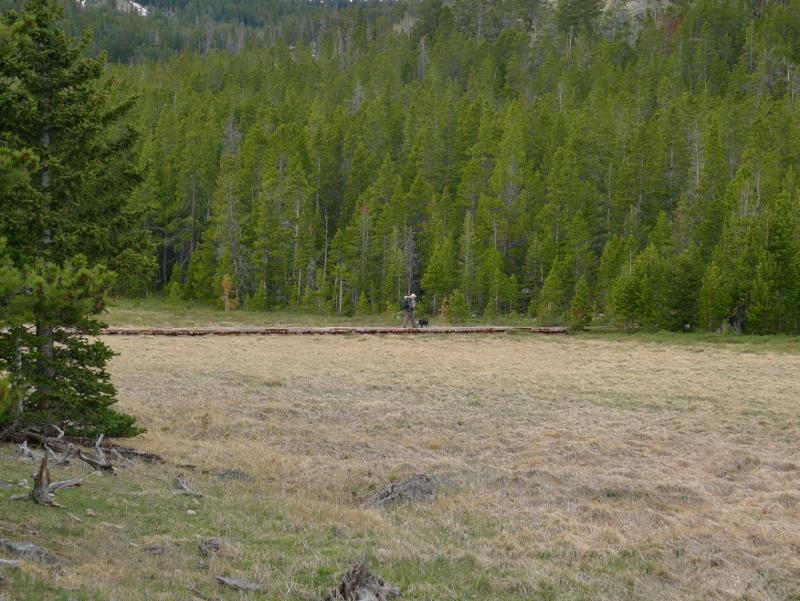 The trail then climbed more steeply in a continuous set of switchbacks. As we climbed past swift flowing mountain streams, we broke out of the trees and rocky terrain began to dominate the landscape. 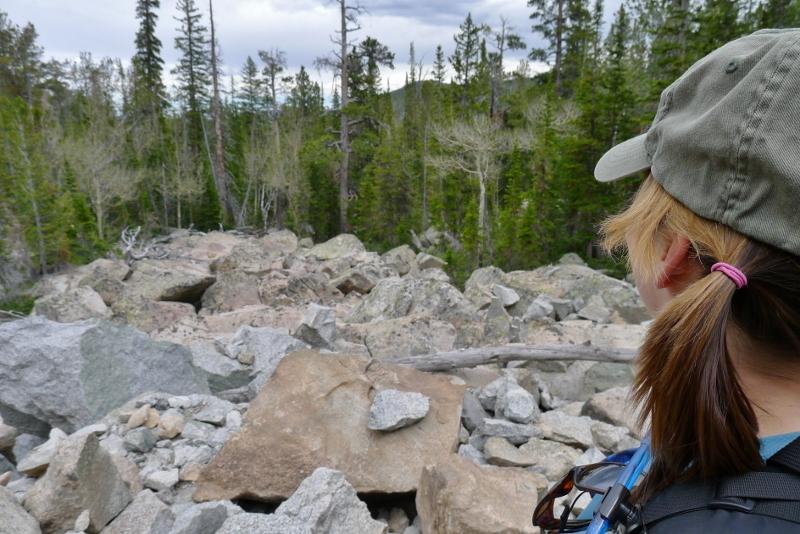 This offered a reminder of a previous offtrail route we once took in the Winds. (A much longer story than this one...) 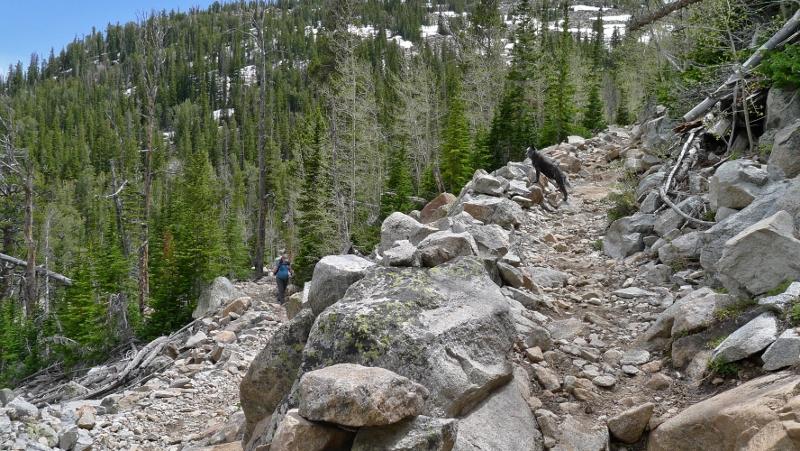 The 4 of us made our way upwards through the rocky switchbacks... 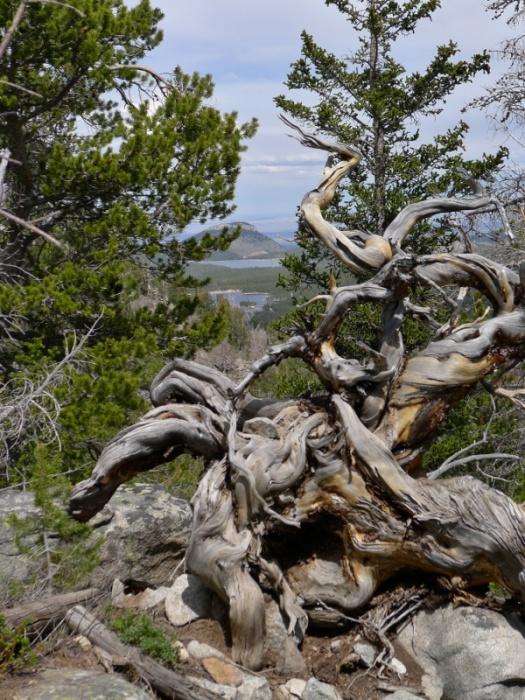 We then entered another pine forest, which began to thin the higher we climbed. We quickly made it past 10,000 feet and began the final push to our destination - The pass at 10,550’. We had seen a few lingering snowbanks along the trail prior to this point, but they began to become more numerous with a few towering over our heads as we passed. (Or ventured over) Eventually we broke into an open meadow at the pass and spent a few minutes enjoying the view. 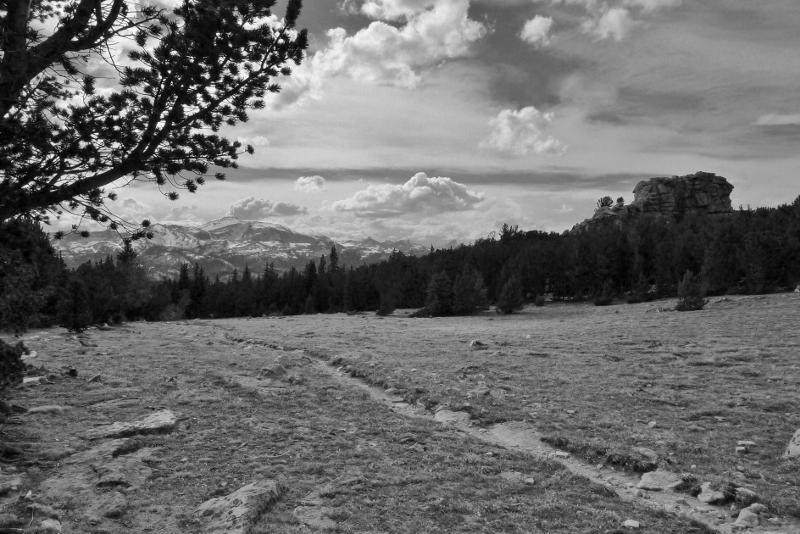 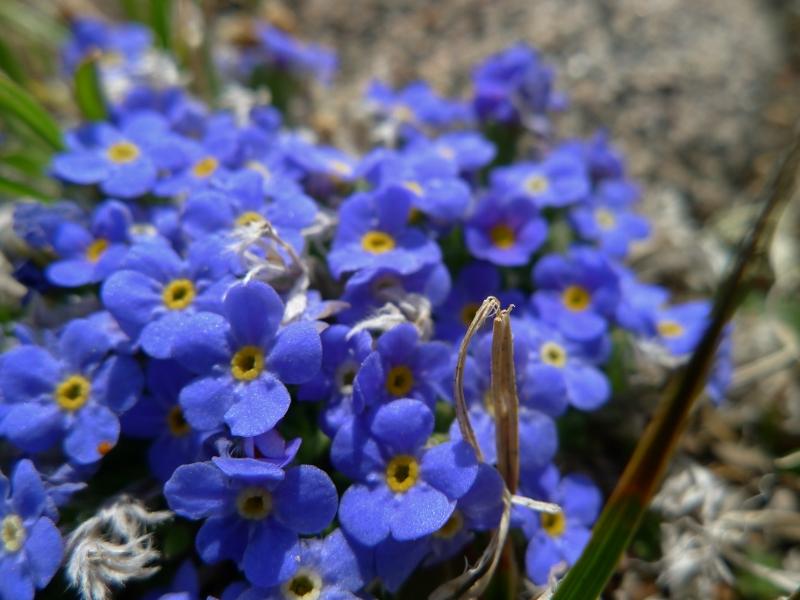 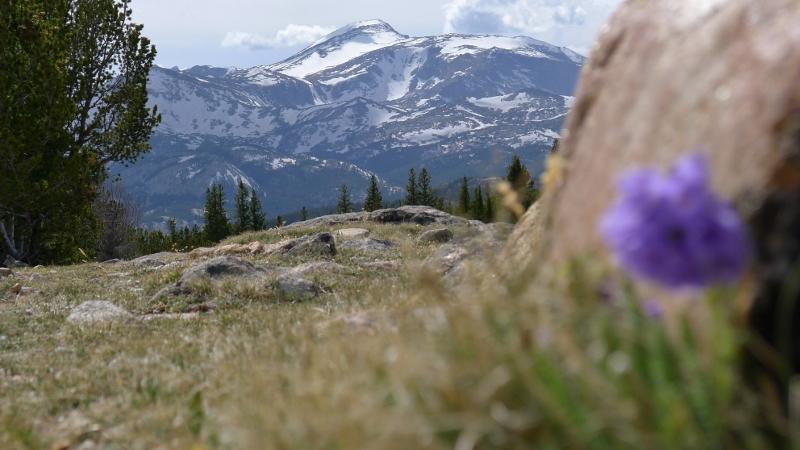 From here the trail continues on to Stough Creek Basin, but now 5 miles in and with the late start evening was beginning to approach. We headed back the way we came as clouds began to close in. Soon thunder echoing through the mountains could be heard, and it soon became obvious that the storm was only getting closer. I tried to ignore the rain at first, but the slow sprinkle soon intensified into a strong shower and the rain began to soak through my clothes. We pulled over and outfitted ourselves (Including the dog) in full rain gear. As soon as I finished zipping up my rain jacket and getting my pack back on and in order the rain stopped, the sun came out, and bird calls began to signal the rain’s end throughout the forest. We hiked on. Heading offtrail into the forest, we searched for quite some time until we found a fairly level space among the pines with no ominous looking dead trees perhaps ready to fall at any moment directly next to our spot. 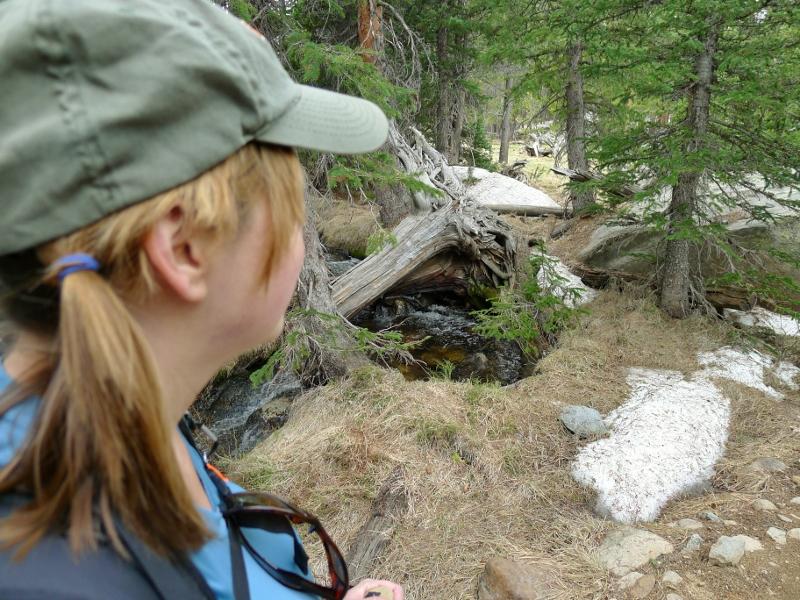 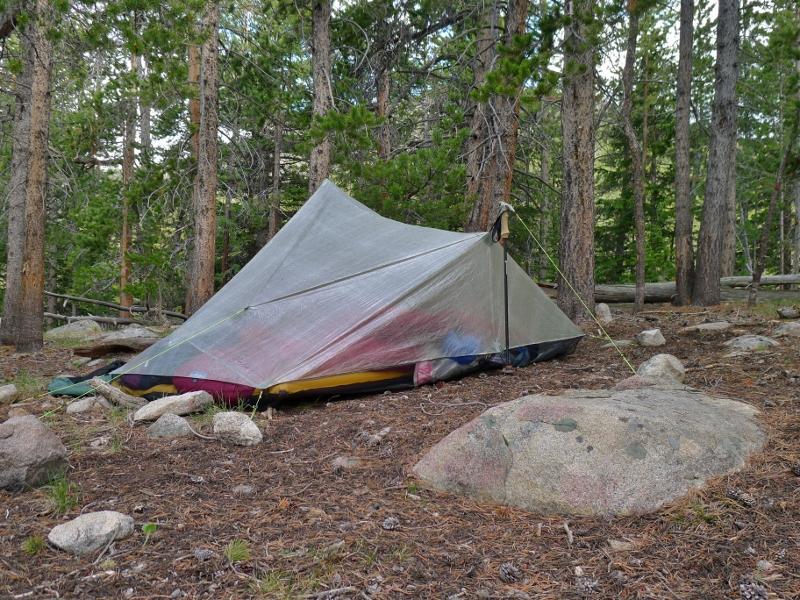 We setup our shelter and filtered water, then ate dinner about a hundred yards from camp as the light began to fade. Bear bag secure, we stumbled through the deadfall and found our way back to the waiting tent by way of headlamp. Once we returned to camp we noticed some "Bear sign" about 20 feet from the tent that we'd somehow missed when scouting out the site earlier. Too late to pick up and move everything, we were glad that we cooked dinner and secured our food some distance away. The moon was nearly full with passing clouds. The thin, opaque cuben fabric of our shelter (Zpacks Hexamid Twin) allowed us to watch the moon, clouds, and the illuminated treetops through the roof itself. Presumably from the marsh we had passed earlier that day, loons could be heard flying overhead, their eerie calls resembling, well… Not much else that exists in a worldly realm. Soon the clouds increased yet again and rain began to fall as we drifted off to sleep.

The next morning we woke to clear skies and hordes of mosquitoes…It’s a low snow year -They’re out early! We retrieved our bear bag to make coffee and breakfast while constantly swatting in an attempt to keep from being eaten alive. Due to the early time of year, (For the mountains) no insect repellent had been packed along. A great cup of coffee and an equally nice breakfast made it worthwhile however, as a white-breasted nuthatch with great determination sought a meal of its own from of a stubborn pine cone just a few feet away. 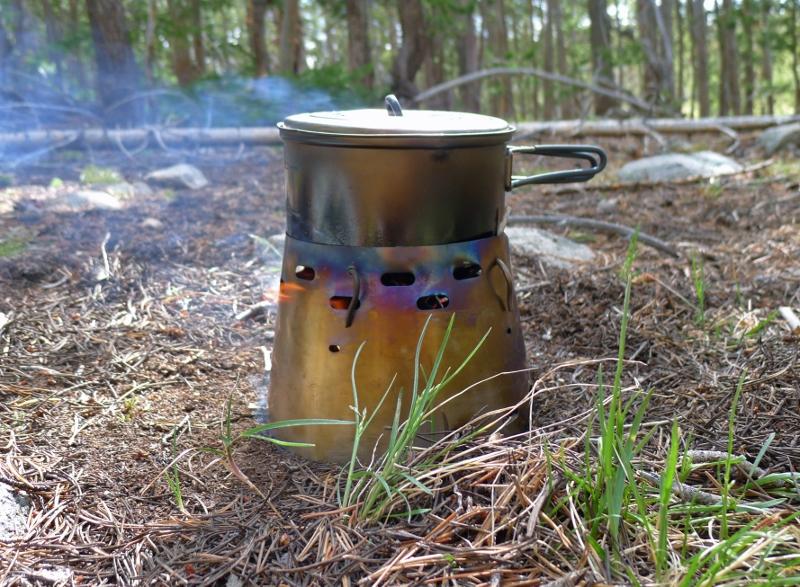 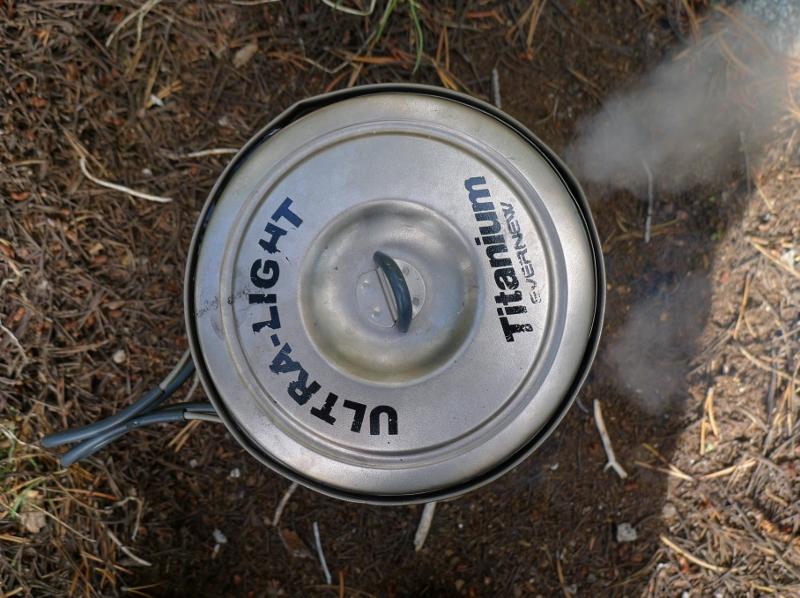 We then packed up in a haphazard manner, as we always seem to do on the last day of a trip. Making our way lower along the trail, we traversed the boardwalk yet again and retraced our steps from the day before, the ford of Roaring Fork Lake colder than ever. Back at the car we threw our packs in the back and carefully drove along the bumpy dirt road leading away from the trailhead. While the trip was short, we were still lucky enough to touch on all the great things backpacking has to offer - And the post-trip burger was as good as ever. 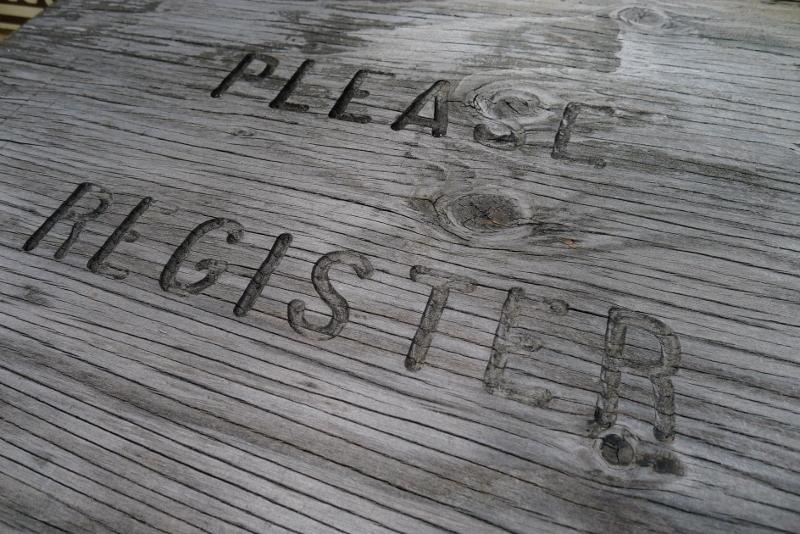