Long before I’d ever shouldered a backpack for a hike into a wilderness area, I found myself intrigued by Arizona’s Superstition Mountains. As the purported location of the Lost Dutchman’s Gold Mine, I was first exposed to the Superstitions in books about lost treasures and historical mysteries I checked out from my middle-school library. An episode of “In Search of . . .” with Leonard Nimoy that featured the legend and aired as a re-run on the History Channel further deepened my fascination. Hidden gold and lost maps, murders and disappearances, towering rock formations and an unforgiving desert landscape – all made for captivating TV to a city kid in Kentucky. Tales of lost treasure closer to home, like Swift’s lost silver mine and buried Civil War payrolls were more geographically relevant, but the Lost Dutchman’s Mine and the Superstitions had made an impression. 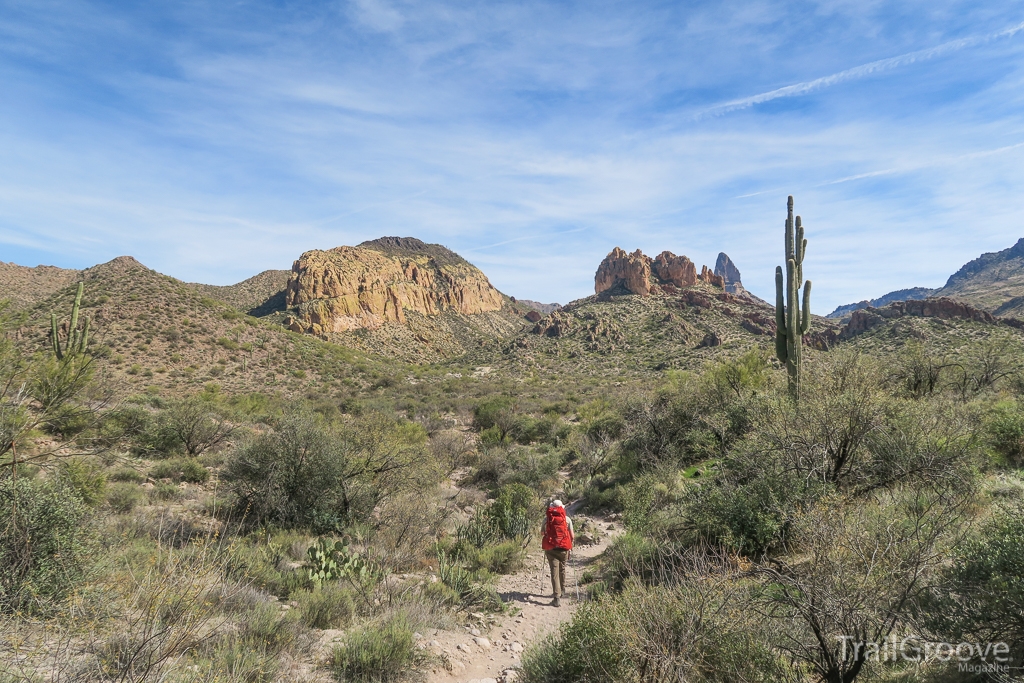 After becoming an avid backpacker, my interest in the Superstition Mountains was rekindled. The Superstition Wilderness is one of the original wilderness areas designated in the Wilderness Act of 1964, is an excellent springtime backpacking destination, and – as far as stunning desert landscapes go – is easily accessible. Despite a few half-hearted attempts to plan a trip over the years, I didn’t get a chance to hike there until recently. Having a close friend and fellow backpacker who lived nearby and was eager to fit in a backpacking trip before the imminent and awesome responsibility of fatherhood was bestowed up him later in the year provided all the motivation I needed. The unlikely yet unique possibility that I might solve a centuries-old mystery while digging a cathole may or may not have factored into my enthusiasm as well.

The plane touched down on the warm runway of the Phoenix airport at 10:17 a.m. and I filled up five liters of water from a water fountain while waiting for my checked bag to arrive. Backpacking efficiency at its best. John picked me up and, despite having not seen each other since a trip in 2015 in Montana’s Anaconda-Pintler Wilderness, we picked up right where we left off. After an anticipation-building eastbound drive, with the mountains rising ever higher from the Arizona desert and the buildings thinning out the further we traveled, we found ourselves on the trail by noon. Desert landscapes are surreal enough, but to have gone from boarding a plane six hours earlier in gray and snowy Missoula, Montana to being able to reach out and touch a Saguaro cactus (not that you’d want to) took the experience to another level. 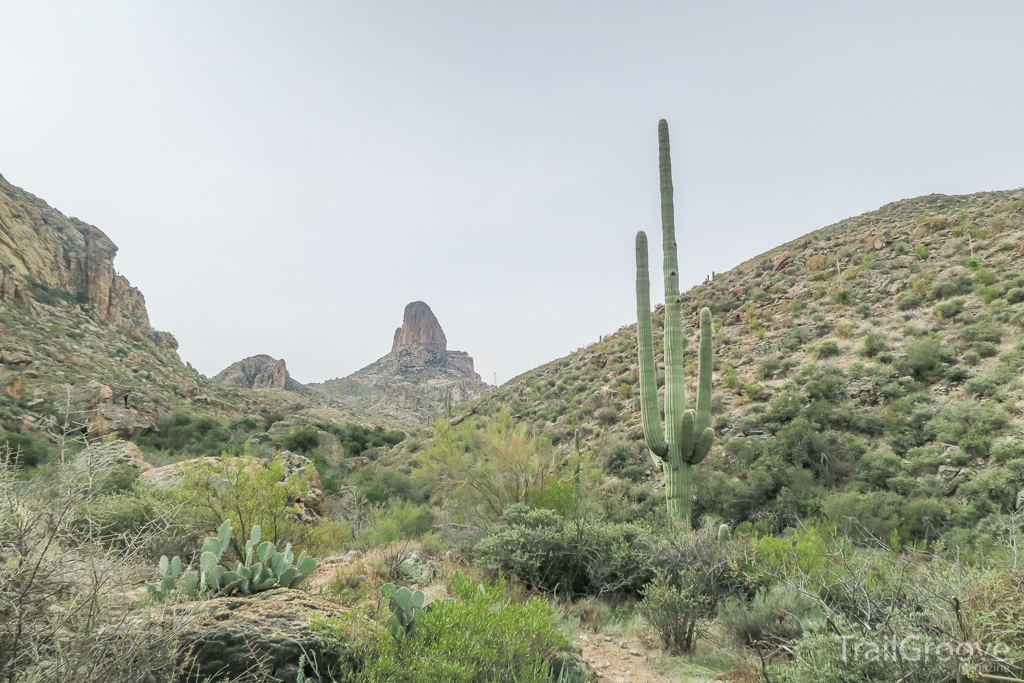 The mix of muted browns and dull greens made the objectively inhospitable landscape seem almost cozy as we traipsed along the trail toward a campsite located a short jaunt from a reliable water source. Temperatures in the 70s, blue sky, and a light breeze made for comfortable hiking. In the shade of a particularly large Saguaro, I paused to investigate what I thought might be a dire circumstance – a puncture in one of my two-liter bladders. As it turned out, it was merely an inordinate amount of perspiration on my lower back. More amusing and, fortunately, much less concerning. And a good reminder of the importance of consuming water in such an arid environment.

We made good time to our campsite, climbing up to a mesa and then descending up to a pass and then down into a canyon, with some stellar views of iconic Weaver’s Needle along the way. Although there were several other backpackers out and about, we made it to the large camping area first and snagged what I believed to be a premium campsite. Secluded and with nice views of the canyon’s slopes, and plenty of elbow room before bumping into prickly, thorny, or otherwise unfriendly forms of vegetation, it was an ideal spot to set up our tents. 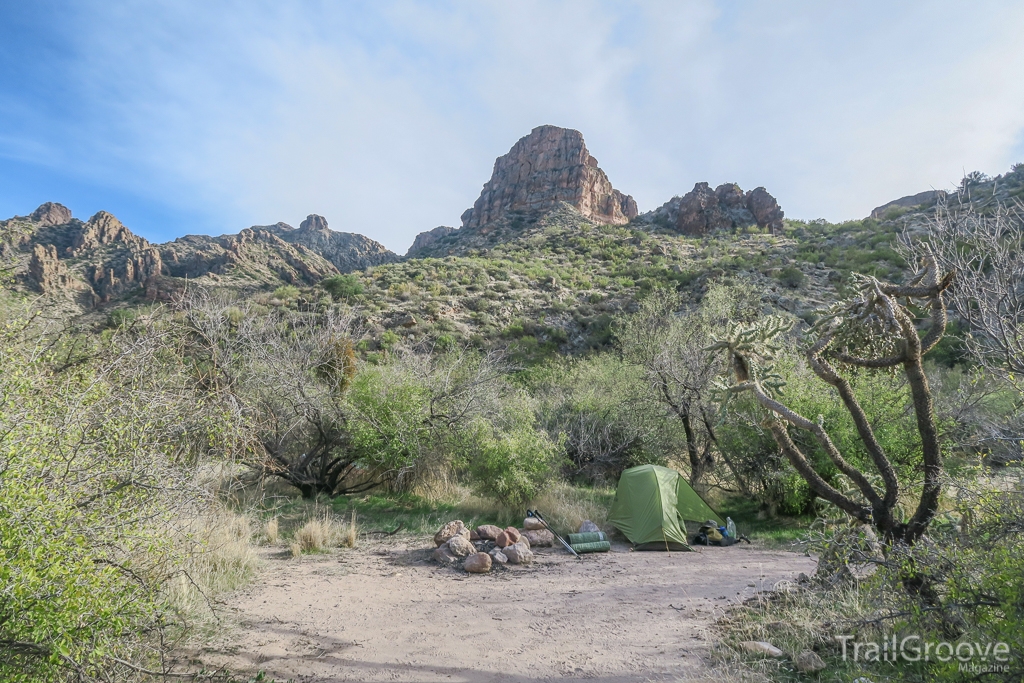 We relaxed for a bit before making the mile or so roundtrip to get water from the reliable spring further up the canyon, which offered suitable campsites that were predictably crowded. While it doesn’t take much to puzzle me, I was genuinely befuddled by the guys we met who earnestly intended to hammock camp in the area. Indeed, John and I had exchanged sarcastic text messages about hammock camping in the desert in the days prior to the trip, amongst other important topics such as sources of water and brands of whiskey. After stocking up on water and comic relief, we began our return to camp. Although our packs were heavy with water on the way back, the gentle downhill walk back to the campsite as the sun set and the light in the canyon changed were enchanting enough to make me forget I even had on a pack.

Back at camp, we stretched out in the twilight and started fixing our dinners. Or at least I started fixing mine while John struggled to open his bear canister, which he regretfully opted to bring to protect his food against rodents. I simply chose to bring my trusty stuff sack to hang from whatever I could find and then hope for the best. Bears are of no real concern in the Superstition Mountains and John paid an unexpected and mildly amusing price for his overkill decision in regard to food storage. 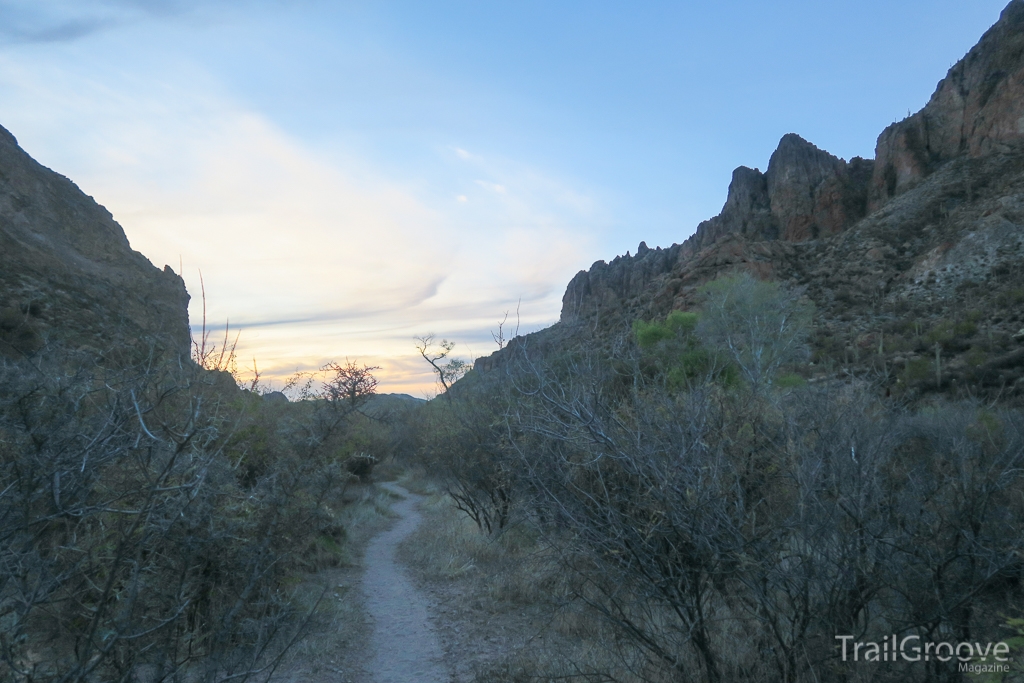 John lacked the ideal tool – a nickel – to open the bear canister and had little success improvising with other tools. A man versus bear canister battle unfolded before me as I devoured my pasta and tuna. I could contribute nothing except sympathy and stifled laughter. Frustration increased and, after about fifteen minutes, I am certain that if I had a spare nickel John would have gladly paid twenty dollars for it. As I moved on to dessert, the bear canister was finally opened in a triumphant display of determination and creative use of sharp objects. John was then able to consume a hard-won but ultimately underwhelming freeze-dried meal. After an hour or two of trading stories and sips of a whiskey while stars began to slowly punctuate the desert sky, we retired to our respective tents for a peaceful night’s slumber.

Although John had intended to hike the approximately 10-mile day hike loop from camp with me the following morning, a late-breaking and unexpected family emergency forced him to curtail his trip and hike out early. Since he would still be able to pick me up from the trailhead the next day, we parted ways that morning and I finished the rest of the planned trip solo. I would be remiss if I didn’t note my surprisingly deep disappointment at the fact that I would be companion-less for the rest of the hike. I’ve done over a hundred nights solo in my decade of backpacking and am incredibly fond of solo backpacking, but I cherish to the very center of my soul the trips I share with close friends. Missing out on the opportunity for another day of wilderness bonding with John emotionally altered my trip, but I understood the gravity of his family situation, adjusted my expectations, and proceeded onward and forward with the rest of my stroll through the Superstitions.

To say that the hiking was blissful would be an understatement. Overcast skies saturated the colors and added depth to the landscape that allowed it to shine in a different way than it had the previous day. The lack of a sun beaming down made the hiking remarkably pleasant and the scenery unfolded with a grandeur and intensity that was jaw dropping. Cacti, distant cliffs, pools of water in the creekbeds, rock formations, all occurred with a perfect mix of frequency and variety. 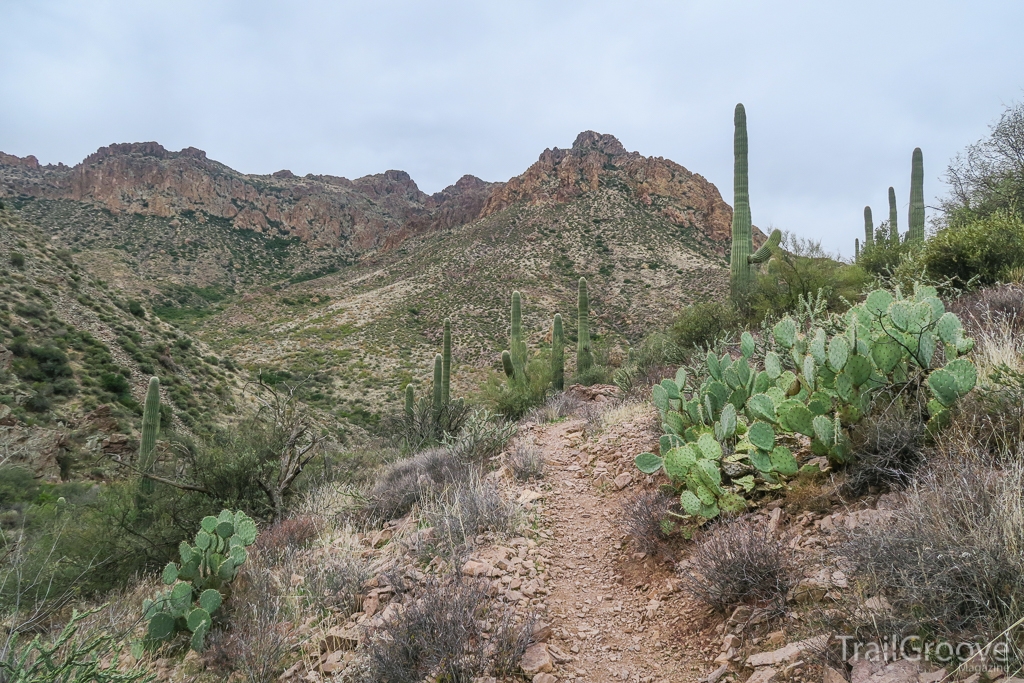 The Superstitions are certainly not an uncrowded area and I had the good fortune to share some of the hike with three other hikers. They were kind enough to invite me on a short scramble up to an overlook for lunch, which had a great view of Weaver’s Needle. We continued on the loop together, but different pacing eventually led to us drifting apart and I returned to my walking reverie through the desert. I re-filled on water at the same spring as the previous day and returned to camp to settle into my usual solo routine of stretching, reading, writing short letters to friends on the backside of maps or a scrap paper to drop in the mail, and replenishing lost calories and fluids.

A light rain fell consistently throughout the evening and overnight, but never to the point of inconvenience. Given how rare rain is in the desert, I looked upon it as a rare treat and appreciated every drop. The beauty of a rain drop on the needle of a cactus is absolutely divine. The cool morning temperatures and light rain which defined my hike out the next morning made for a mystical landscape, as fog rolled across distant mesas and swirled around rugged formations and mountains both near and far.

I made it back to the trailhead a half-hour or so before the pick-up time that John and I had agreed upon, which allowed me to stretch, make some tea, and generally lounge around the trailhead and enjoy the desert ambience. Upon reuniting with John for the concluding chapter of our trip, which was an overnight stay at the delightfully funky El Dorado Hot Springs to ease our exaggeratedly aching bones, we picked up right where we left off. And that is perhaps as best a note to end on as any – when it comes to friends, backpacking, hiking, and life in general – there is a simple pleasure in picking up where you left off, regardless of distance or time passed, that leaves one with nothing more to desire. 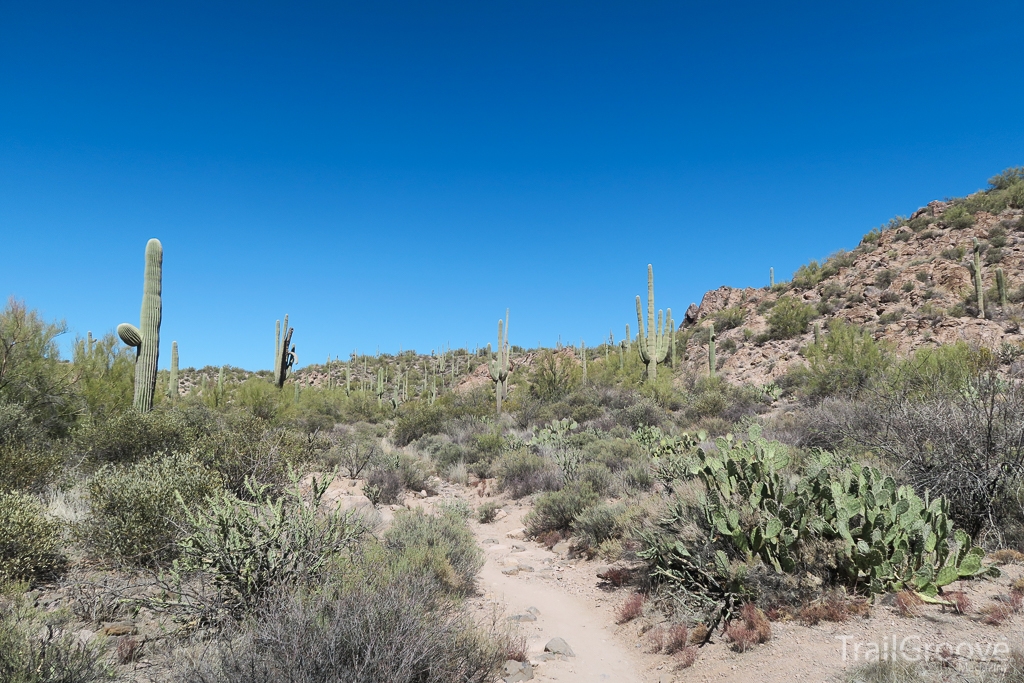 Information: The Superstitions are an ideal destination for the majority of most seasons other than summer. Water and heat are the primary limiters for trips here and should be given the utmost respect and consideration when planning your trip. The trailheads can be popular and crowded on weekends “in season” and camps directly adjacent to water sources can suffer from overuse. If you can commit to dry camping and plan your water sources appropriately, you greatly increase your chances for solitude. Several popular trailheads, such as Peralta and First Water, are located only an hour’s drive from Phoenix. Call the Tonto National Forest, Mesa Ranger District, for the most up-to-date information.