With so many places to explore in Montana, it might seem a bit strange to visit the same place for a second time – much less a third time. But one lake in particular has drawn me back to it three times over the last few years. My first visit to this lake was coincidentally my first summer in Montana. My eagerness for mountain scenery led me to visiting it so early (late May) that even though it had been a mild winter, the lake was still frozen over and although the scenery was magical I wasn’t able to fish it. That trip also resulted in a memory that made an impression on me and that I’ve succeeded in avoiding repeating – camping on top of slowly melting snow in a thunderstorm. 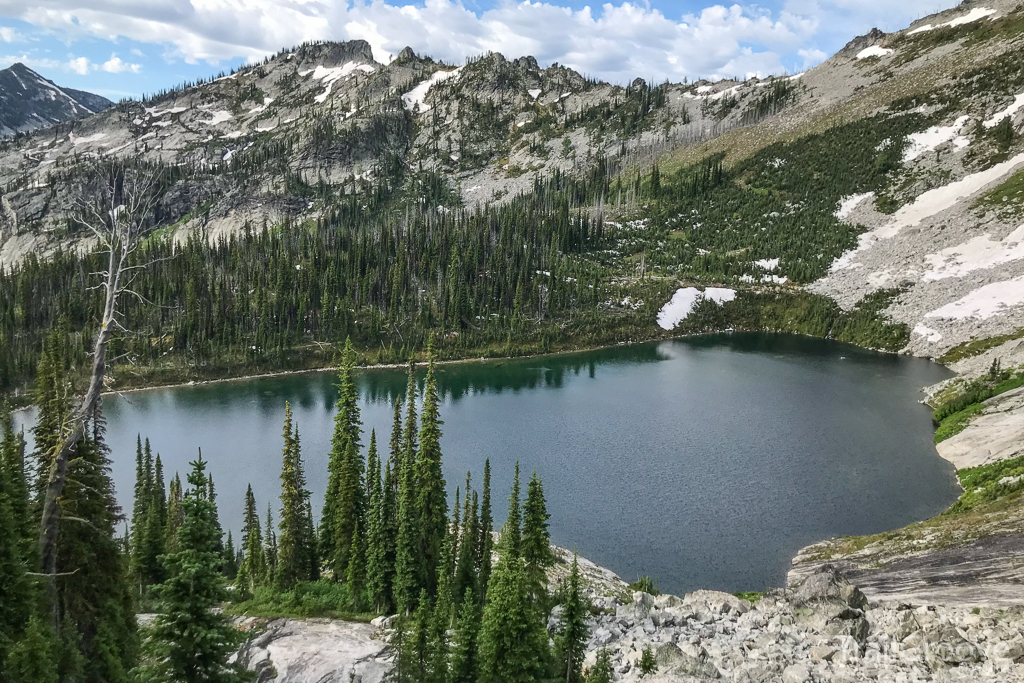 It was four years before I would visit the lake again, this time in mid-June. I hoped the extra two weeks of warm temperatures would allow me to arrive right as the lake completed its thaw and might provide excellent fishing. No such luck – the lake was approximately 90% covered in ice, only a swimming pool sized area near the outlet stream was open water. I descended to a nearby and much larger lake that, a thousand feet lower, was totally free of ice and even warm enough for a brisk swim. Or perhaps it could better be described as “barely warm enough to not make hypothermia a certainty”. A few fish were rising on that lake, but none were interested in the flies I tossed out.

It should be mentioned that this lake is not an easily reached or often visited body of water. The trail that leads up to it has long been abandoned and its description in a guidebook was equal parts discouraging and intriguing. Sweetening the description of a seldom visited, unnamed lake was the comment that “a cutthroat fishery thrives in these deep, cold waters.” I hoped to finally get to see for myself what swam beneath the lake’s beautiful waters that reflected sheer granite cliffs stretching toward the crest of the Bitterroot Mountains. According to the guidebook, I’d already succeeded in perhaps the toughest part of reaching the lake which is simply knowing where to begin the 1000 foot climb from the trail that passes along the shore of the lower lake. 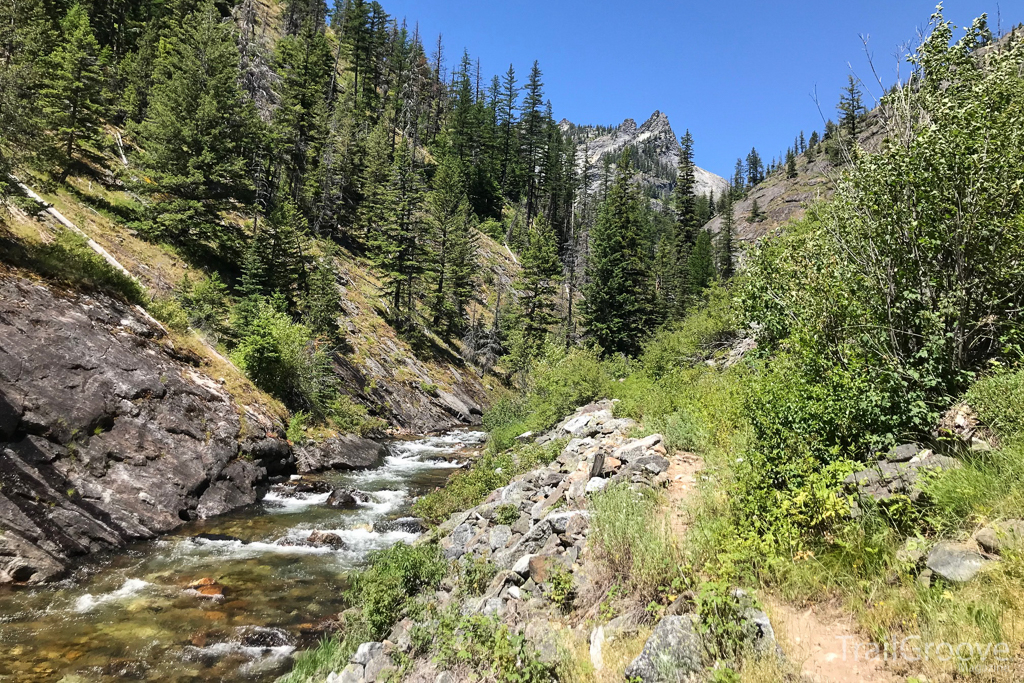 While that description – of the toughest part being where to know where to turn off onto the faint trail to the lake – may have been true a decade or two ago, since the trail has all but disappeared I would counter that the steep ascent from thick brush and downed trees is the most difficult part. After my most recent experience with hiking to the lake, I’m not entirely sure I will do it again. Conveniently, it will compel me to visit new areas. On the downside, it makes me wary of returning to an absolutely beautiful lake that has (spoiler alert) decent fishing and two stellar side-trip options, only one of which I’ve done in its entirety.

On a beautiful mid-July day, I hiked the 8.5 miles to the large lake where I then began the real effort of my day – hiking another 1000 feet (I’d already gained 2000 feet to reach the first lake) off-trail to the unnamed lake where I would spend the night. Despite having done it twice before, the final push up to the lake really made a miserable impression on me this time. The steepness, the unstable footing, and the downed trees all seemed worse this time around. After finally making it to the lake, it was like seeing it for the first time as it wasn’t covered in ice. The beauty of this place had blown me away on the previous trips, but finally seeing it in its summer scene was incredible. 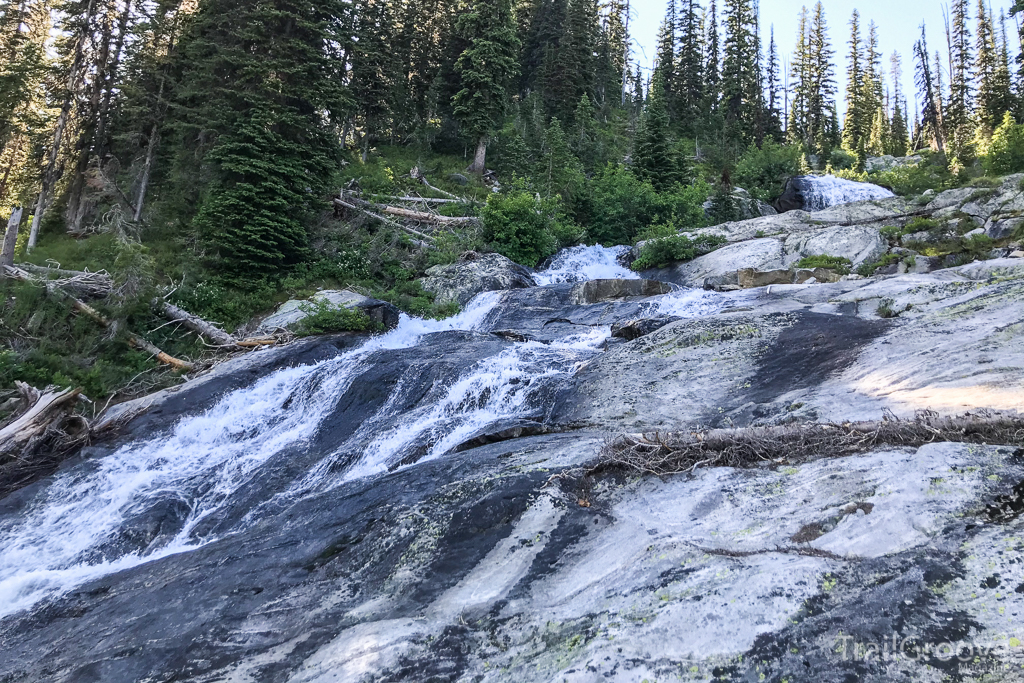 Snowdrifts still abounded in the shady spots and some went all the way down to the shore of the lake. A lovely and tall waterfall provided a charming soundtrack as it cascaded down the granite slopes and entered the lake. I’ve been to over a hundred mountain lakes ranging from Glacier National Park, the Olympics, the Cascades, and the Northern Rockies and this is one is definitely among my favorites.

After admiring the scenery and scanning the water for rising trout (none that I could see), I hastily set up camp and then headed over to a large granite ramp that went to the water’s edge and which would make an ideal place to cast from. A dozen casts later – perfect casts, in my eyes – I began to worry that maybe the trout, like the trail, had become a shadow of their former selves or disappeared completely from the lake. Between deep freezes and other environmental factors, it is not out of the question for lakes to go “dead” from time to time. 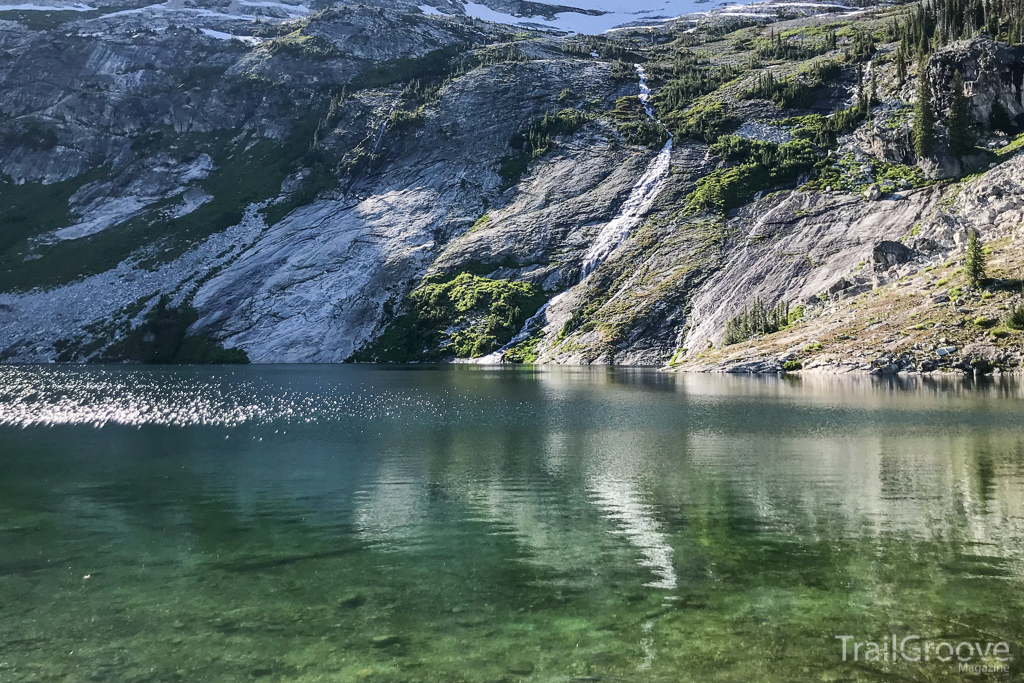 Fortunately, a few casts later a beautiful cutthroat trout took my fly and ran with it. After releasing that fish, I began to see a few of the tell-tale circles dot the water and I realized that there were plenty other fish to catch. I caught another half-dozen trout before stopping to eat dinner and caught a few more after that. My luck didn’t hold out the next morning and I left the lake on a beautiful cross-country trip to a basin filled with beautiful (but fishless) tarns on my way back to the trailhead. Despite it not being a record-breaking outing for my personal fishing stats, I’d succeed in something I’d set out to do several years prior and that was a satisfying feeling. Apparently, the third time was a charm!