Although I did several trips on cross-country skis and snowshoes that involved camping out in the Northern Rockies in below freezing temperatures for multiple nights, the past few years my definition of “winter backpacking” has either included a US Forest Service rental cabin with a wood stove or a plane ticket to southern Arizona. I still find winter to be a beautiful time of year and I enjoy the heightened elements of the season that seem so magical, but I just hadn’t hadn’t been motivated to do a true winter backpacking trip for quite some time. After several blissful day trips cross-country skiing near the Idaho border at Chief Joseph Pass the allure of an overnight trip in winter came back to me. 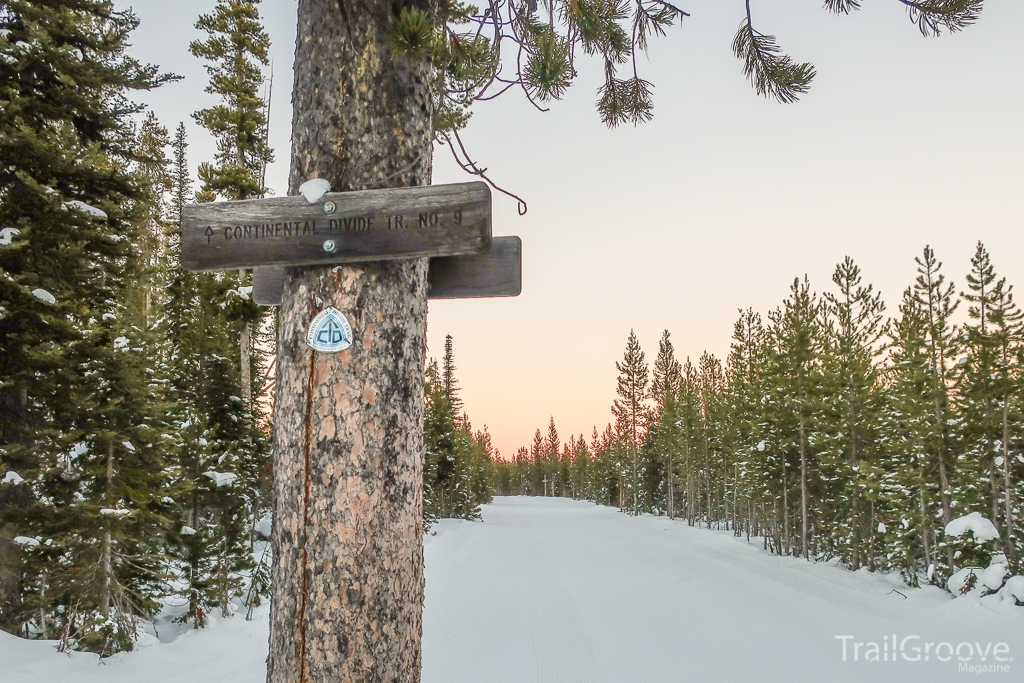 I’d wanted to ease back into winter camping and the groomed winter trails at Chief Joseph Pass in the Bitterroot National Forest were an ideal destination. There would be no need to break trail solo, which is an arduous task on skis with a full pack. During the day trips to cross-country ski (with one wonderful “night trip” to cross-country ski under the full moon), I scouted out a nice spot on the edge of a meadow in a nook sheltered from the wind by the lodgepole pine forest but still allowing for a great view of the meadow and the sky above.

Even better, my campsite had a small spring nearby that wasn’t yet covered by the two feet of snow that had fallen by early December. Melting snow for water is one of the most tedious and time-consuming tasks of winter backpacking – and winter backpacking is an activity filled with such tasks – and to be able to avoid that by having the spring nearby amped up my enthusiasm. I watched the forecast for the perfect balance of clear skies but not too frigid temperatures (I’m not equipped to backpack below 0 degrees Fahrenheit and I prefer not to backpack if it’s below 10 degrees for the overnight low) and found a timeframe that worked well for me. 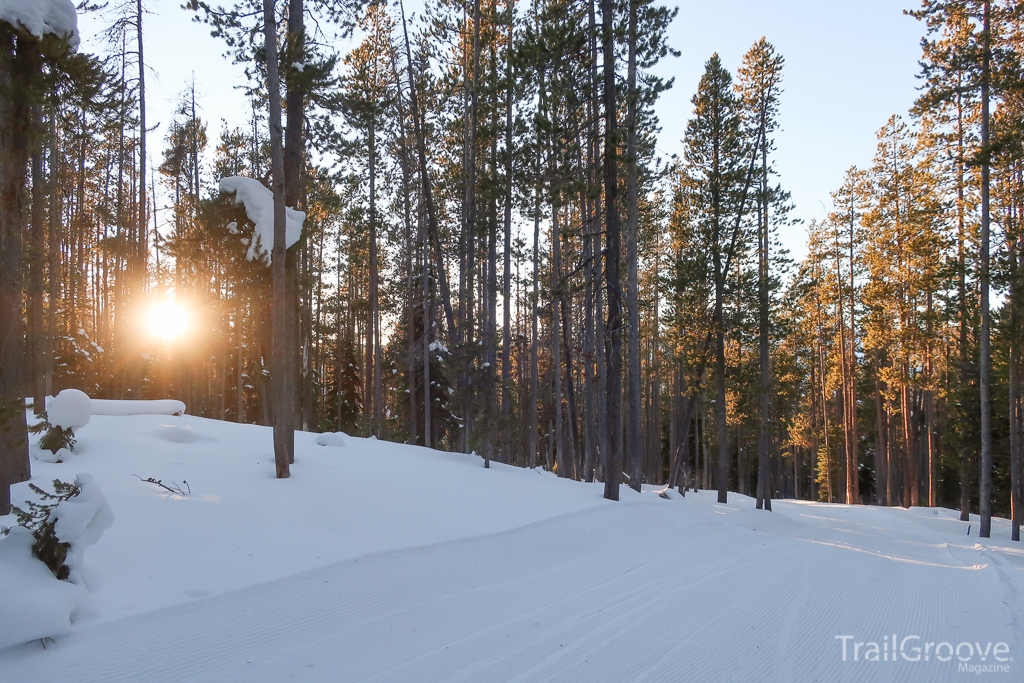 My pack was heavier for the winter overnight than it was for most of my two and three-night summer trips, but I knew I’d be comfortable and didn’t want to take any chances. Even though I would be camping only a mile and a half away from my car in a popular cross-country skiing area, winter is not a good time to try and cut weight by leaving behind gear that could immensely impact your enjoyment, not to mention your safety. My liquid fuel stove, 0 degree sleeping bag, and Black Diamond Firstlight Tent were the biggest contributors to my increased pack weight. Insulated pants, down booties, and my winter down jacket also added some weight that is usually absent on trips to cabins in winter or when sleeping in a tent in summer.

I arrived at camp warmed up from the ski in and, as planned, not sweaty thanks to proper layering. This allowed me to accomplish all my camp chores – stamping out a tent spot, letting the snow settle, setting up the tent, hanging my food bag (more out of habit and caution against small critters than anything else), and enjoying a snack – before heading out for a late afternoon loop on the exquisitely groomed trails. Since sunset was not long after 5 p.m., it made sense to spend as much time moving as I could during the daylight hours and only return to camp to cook and sleep. 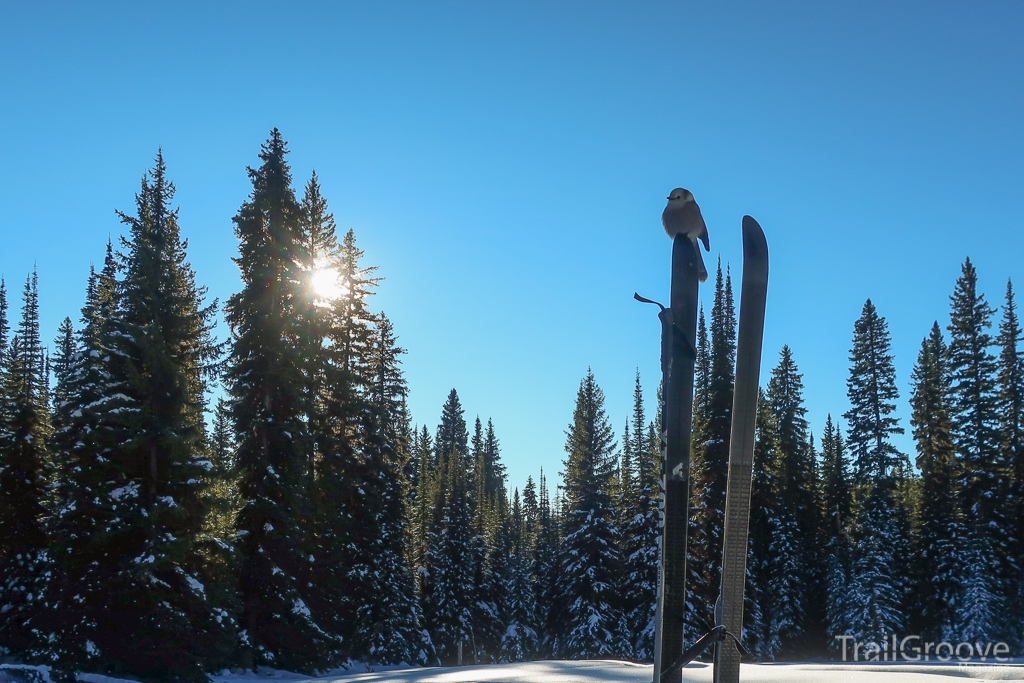 I enjoyed a nice sunset on my evening ski and arrived back at camp with just enough light to set up most of my kitchen and start boiling water without having to use my headlamp. As my freeze-dried meal cooked in its bag (which was wrapped in a bandana and placed under my jacket to allow me to appreciate its warmth) I was able to watch the stars come out as I sat atop my foam sleeping pad that was conveniently placed against a fallen tree to create a perfect backrest with a great view across the meadow and above the trees to the dimming sky.

By the time I was finished with dinner and making hot chocolate, the stars were filling up the sky. I saw one of the most lengthy and impressive shooting stars of my life and that moment made all the “hassles” of the trip worth it. What was even better was that it was only 6:30 p.m. or so when I saw this celestial highlight. I love stargazing, but tend to get sleepy early so it’s hard for me to stay up late enough in summer to get to enjoy this activity. All told, I probably saw ten shooting stars before I headed to bed shortly after 8 p.m. 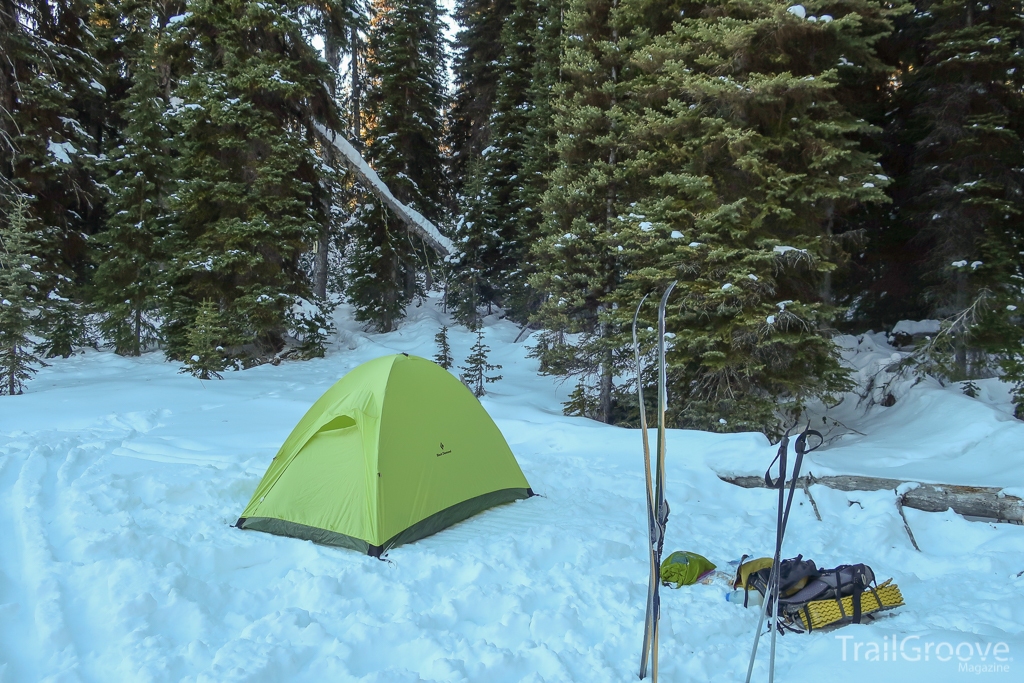 In my tent, I had a book of Jack London short stories and a thermos of tea to keep my company until I went to sleep a half-hour later. The sun wouldn’t rise until almost 8 a.m. the next morning, so I settled down for a long and restful night of sleep. I woke up a few times, but was always able to go back to sleep within a few minutes. By 9 a.m. I was eating breakfast and breaking camp as the sun lit the meadow and the snow caught the morning rays. A quick ski back to the parking lot, where I stowed my heavy pack and then met up with a friend for a few miles of cross-country skiing, ended my first foray in several years into winter camping. 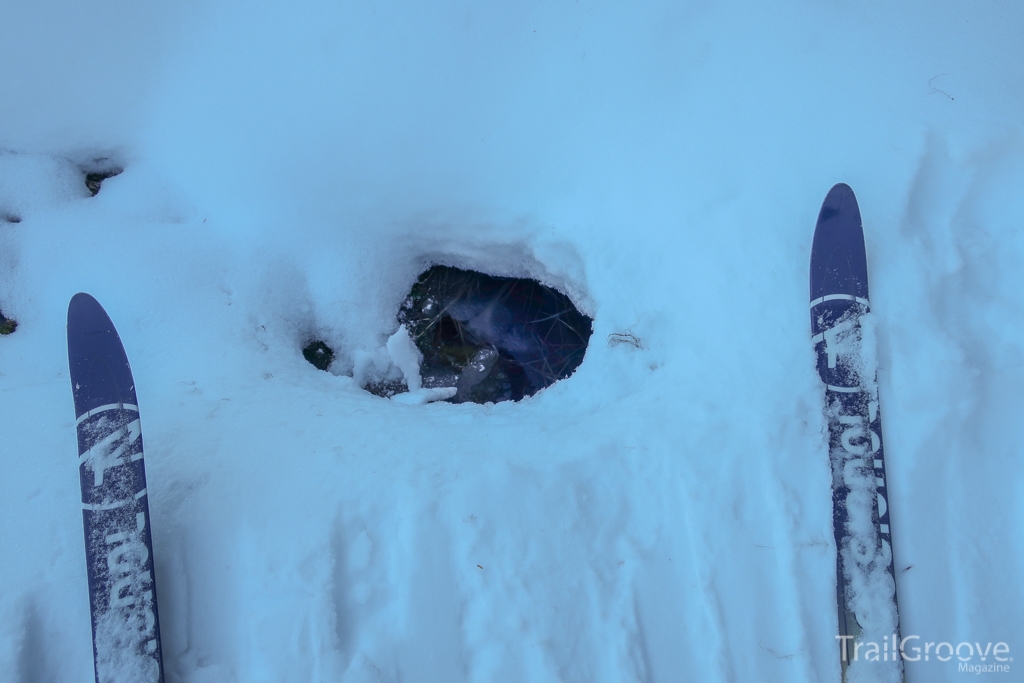 Overall, I would put this trip down as a success and it renewed my interest in doing more mild winter camping (at least “mild” by Northern Rockies standards). My skills weren’t as rusty as I thought and I think I packed smarter and not heavier in regards to insulating layers than I had on previous trips. The importance of tasty food and warm beverages was reinforced and the only thing I remember forgetting (a small brush to get snow out of the tent when it is inevitably tracked in) didn’t prove to be catastrophic. My tent poles did turn out to need new shock cord, but the conditions were so mild that it didn’t really matter and I was able to keep them connected. A good lesson to double-check seldom used gear that will certainly be heeded in the future. So, if you’re contemplating getting out this winter – go for it! It’s a wonderful time of year if you’re prepared and by starting small and planning well you can ensure a comfortable and safe trip.

Information: Chief Joseph Pass is groomed for classic and skate skiing and has over 20 miles of trails. Grooming typically begins in December and runs through the end of March. There is no fee to use this area and a day-use warming hut is available. The hut can be rented for overnight use through recreation.gov.

Getting There: Chief Joseph Pass Cross-Country Ski Area is located near the Idaho and Montana borders near the junction of Hwy. 93 and Hwy. 43.

Best Time to Go: Chief Joseph Pass shines as a winter destination and that is arguably the best time to visit. While the Continental Divide Trail does pass through Chief Joseph Pass, there isn't much in the way of scenery near the pass as most of the trails are in dense coniferous forest. The CDT is much more scenic further north in the Anaconda-Pintler Wilderness or further south in the Beaverhead Mountains.

Maps: The Bitterroot Cross-Country Ski Club provides a small brochure-style map that is more than sufficient for navigating the trails on skis or snowshoes. Junctions are also clearly signed. The area is an absolute maze of roads (both active and decommissioned) and while it is easy to navigate in winter, if visiting in the summer for mountain biking it can be more confusing as the winter trails signs are removed. The Montana Delorme Atlas and Gazetteer is useful both for getting to and planning general recreation in the area.