It is doubtful that T.S. Eliot had backpackers in mind when he wrote that “April is the cruellest month”. Literary context aside, I’ve found this observation to be unpleasantly accurate in regard to outdoor recreation in Montana. After the short days and cold nights of winter, April tantalizes eager hikers with longer days, blue skies and mild temperatures in the valleys. The skis are put away, but the trails are either too snowy or too muddy to provide much enjoyment. Conditions on most rivers, not to mention the combined water and air temperature, are lacking in the eyes of all but the brave and the bold. 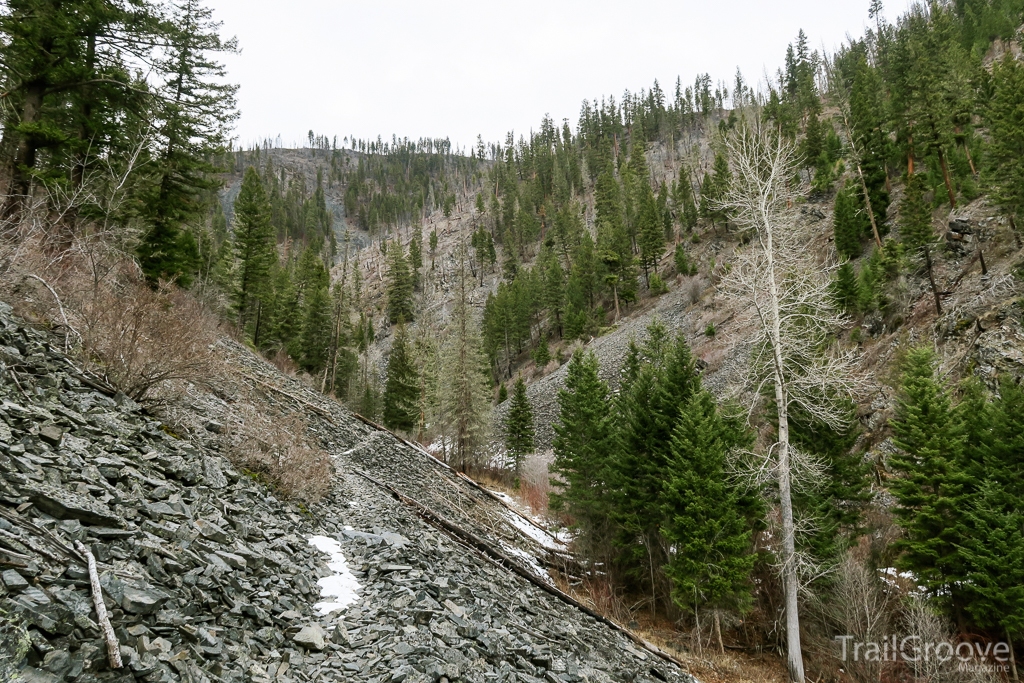 Even though snowline is only a few miles from the mouths of most canyons in the mountains of the Northern Rockies, the temptation to get out and backpack is difficult to resist. I yielded to such temptation on a recent April weekend and headed over to the east side of the Sapphire Mountains to a low-elevation trailhead for the Welcome Creek Wilderness. Unlike Glacier National Park or the Beartooth Mountains, the landscape of Welcome Creek Wilderness does not draw visitors from far and wide – or even many visitors from nearby. Without lakes, waterfalls, or much in the way of alpine scenery, Welcome Creek Wilderness comes up short in the scenery department when compared to its neighbors.

Despite its lack of scenic highlights, this wilderness offered me a decent place to stretch my legs fairly early in the season and solitude was guaranteed almost as surely as sunset. As long as asphalt isn’t involved, I’ve never been overly critical of most landscapes, opting instead to simply enjoy the subtleties of nature when the superlatives weren’t available. I planned to hike about five miles up Welcome Creek to Carron Cabin, a shelter built during the mining days of the late 19th and early 20th centuries that I’d visited two years prior on an equally ill-advised early season outing. 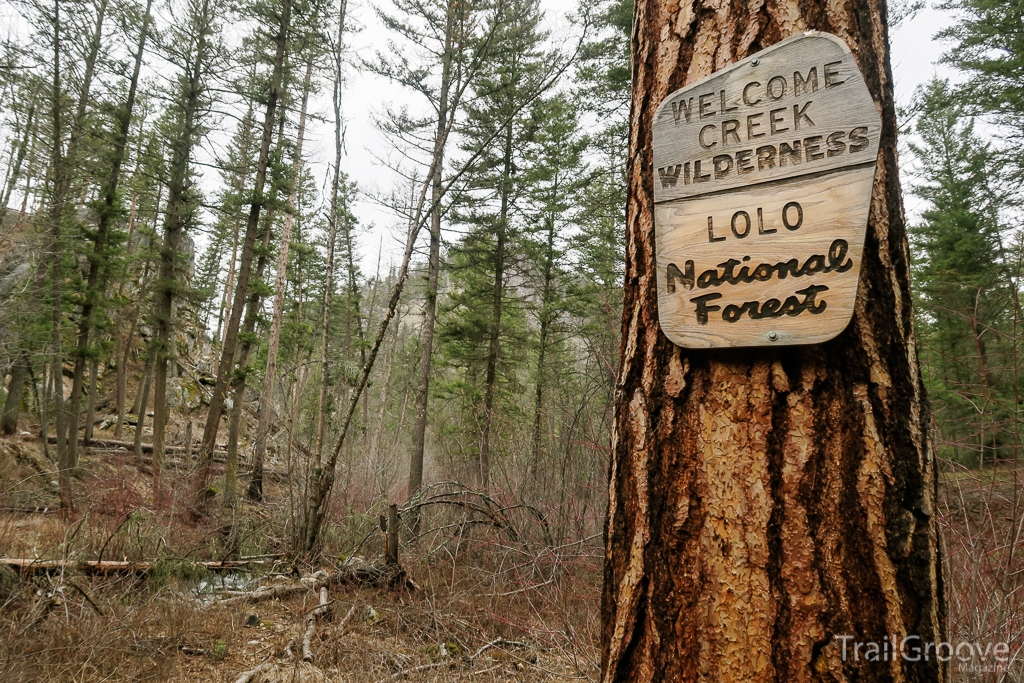 I arrived mid-day at an empty trailhead, strolled across Rock Creek on a nifty suspension bridge, crossed the swollen channel of Welcome Creek on a downed tree, and a few steps later passed the wilderness boundary sign. Things would go figuratively downhill from here, although the trail gradually gained around 1,000 feet of elevation in the five miles to the cabin. Perhaps a mile in I hit the first of many snowdrifts, each with their own charm, at the base of talus slopes. The snow was packed down in places by previous visitors and didn’t provide much difficulty (that would come later, when the snow deepened), but it did require that I slow my pace a bit. I continued on at a decent stride, with the soundtrack of rushing water, chattering squirrels, and chirping birds distracting me from the inconveniences of the footpath. 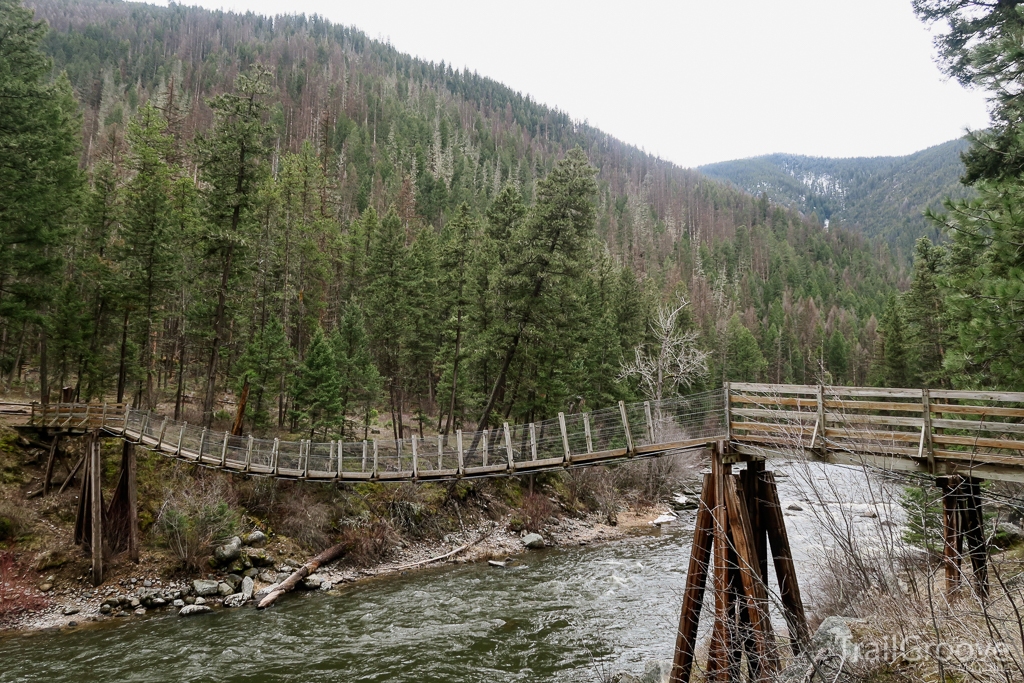 After crossing Welcome Creek on a well-built and rustic log bridge, roughly the halfway point of my trip to the cabin, I took a break to drink some water and have a snack before starting a section of trail which I had found to be especially pleasant on my prior trip. Traversing the hillside about 100 feet above Welcome Creek, this section of trail was less brushy than the creek-bottom trail that preceded it and afforded more expansive views of the steep canyon. No more than a quarter-mile into this stretch of trail I hit snow and could see where wiser but less determined hikers had turned back. Short on wisdom and overflowing with determination, I started a slog to the cabin that saw me postholing in knee-deep snowdrifts, scrambling over and under downfall, enjoying a few hundred feet of snow-free trail, then repeating the order with limited variation for the next two miles. 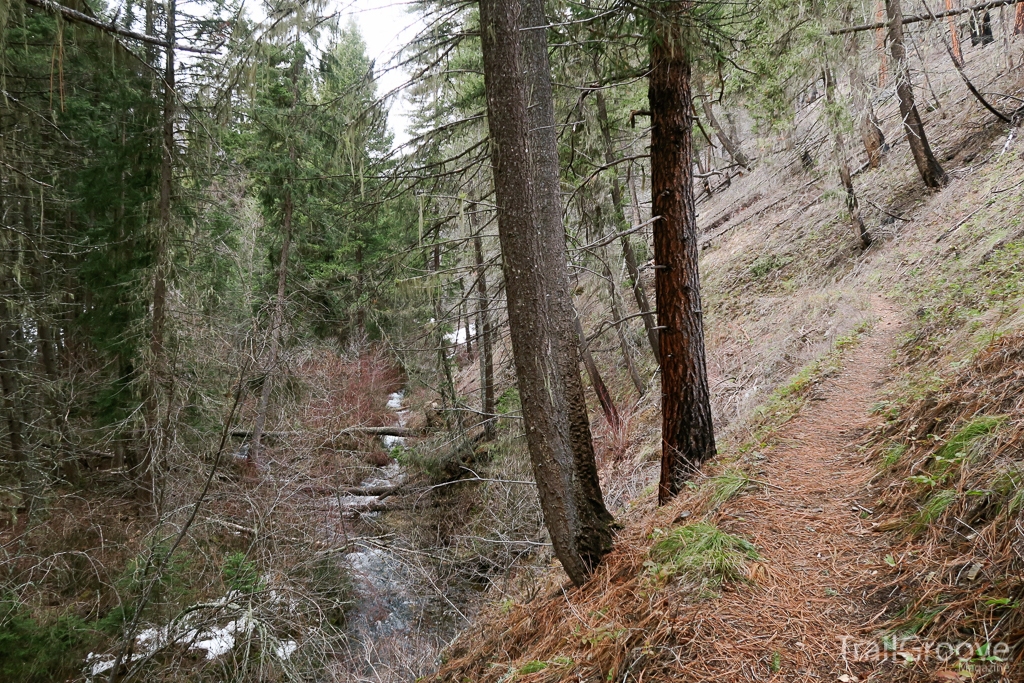 The workout of postholing through snow with a backpack, climbing over a downed tree, then postholing some more is one that no machine in a gym can emulate. A combination of exertion and anticipation led me to see mirages of the cabin after about an hour, with every dark spot and cluster of downed trees manifesting itself as the outline of the linear needle in the organic haystack. Just as I started to wonder if this trip had been a good idea after all, I reached the cabin and set down my pack. 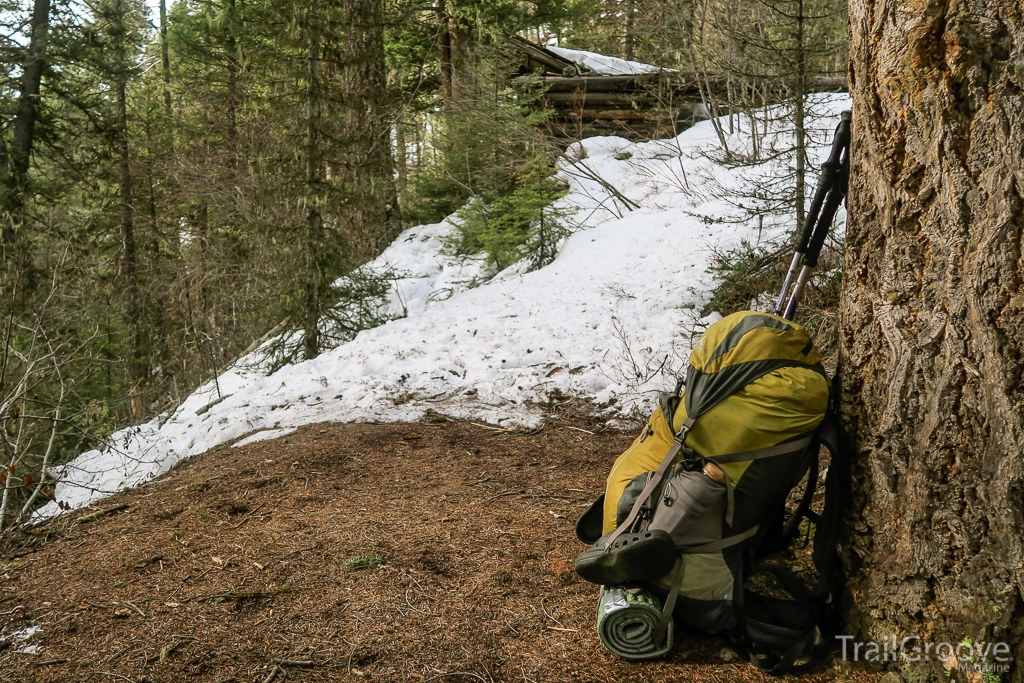 Dilapidated but still retaining its basic structural elements, the Carron Cabin has an intriguing presence. A quintessential “relic of a bygone era”, the cabin seems to embody a simultaneously charming and haunting corner of Americana that is worthy of a more eloquent and thoughtful description than I can provide in this humble narrative. While not exceedingly well-documented, a collection of papers at the University of Montana Archives (the Bud Moore Papers; Moore was a trapper, forester and general outdoorsman in Montana for much of the second half of the 20th century) contains several journals from a person who spent a significant amount of time trapping, hunting and hiking in the area – with the permission of the optimistically named mining claimant Lucky Hancock – prior to it becoming a designated wilderness area. Additionally, there are several digitized photographs of the cabin from the 1970s available online as part of the Montana Memory Project.

While the cabin would provide some shelter to an exceedingly desperate hiker, an absolutely ideal campsite is situated beneath a stately Ponderosa pine behind the cabin. Sheltered from the snow, this spot was bone dry in many places and only slightly damp in others – a much more preferable alternative to setting up camp on snow or taking my chances trying to get cozy in the cabin.

Camping in a “rustic” miners cabin has a certain charm to it, but my sober analysis of the situation dissuaded me from doing this based on the following points: I didn’t have enough Ibuprofen to deal with the headaches I would have from hitting my head on the low doorframe when going in and out, I couldn’t remember if my tetanus shot was up to date (the cabin could be included as an outlier on the Rust Belt due to the abundance of rusting tools, nails, and other artifacts), and I didn’t want to take my chances with getting hantavirus from its resident rodents. I set up camp quickly, stretched, and then leaned back against the pine and watched the black shadows of trees stretch out onto the perfectly white canvas created by lingering snow on the steep talus slope on the opposite side of Welcome Creek. 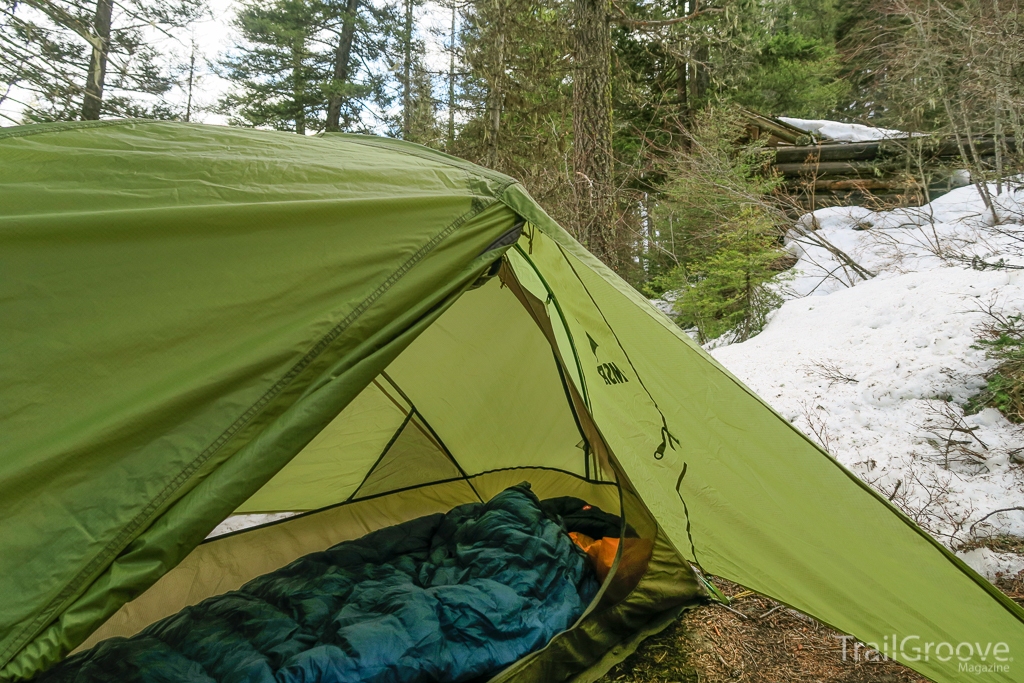 As twilight settled into the canyon I did some of my final stretches for the evening and cooked dinner, enjoying pasta and tuna with spinach and mushrooms. I didn’t feel like struggling to start a fire, or struggling in general, so I wound the evening down with a few sips of scotch, some music, and some tea candles. The photocopied pages of the guidebook I brought along contained a few paragraphs titled “Lawlessness on Welcome Creek” which described the bust of the nearby gold boomtown of Quigley, the resulting horse thievery, and an outlaw named Frank Brady who was killed by sheriffs near Welcome Creek in 1904. Watching gray clouds float through the dark sky while “Jack Straw” by the Grateful Dead drifted through my ears allowed me to ponder how the song paired perfectly with the history of the area. The lyrics about crime and desperation in the West seemed to almost come from the mouths of the ghosts of the men who had lived, worked, thieved, and died in the thousands of places in the West with rugged landscapes and rugged histories, of which Welcome Creek Wilderness was just one:

We used to play for silver, now we play for life
One’s for sport and one’s for blood at the point of a knife
Now the die is shaken, now the die must fall . . .

Leaving Texas, fourth day of July
Sun so hot, clouds so low
The eagles filled the sky
Catch the Detroit Lightning out of Santa Fe
Great Northern out of Cheyenne, from sea to shining sea

Gotta get to Tulsa, first train we can ride
Got to settle one old score, and one small point of pride. . .

Jack Straw from Wichita cut his buddy down
Dug for him a shallow grave and laid his body down
Half a mile from Tucson by the morning light
One man gone and another to go, my old buddy you’re moving much too slow

I entered my tent to go to sleep just as a crescent moon rose above the mountainside and slept the type of deep sleep that is a luxury any time, but especially so when backpacking. I felt fortunate to awake feeling well-rested, as I wanted to start hiking before the sun came out and warmed the snow up too much. I enjoyed some coffee, read a chapter or two in the paperback Western novel I’d brought along, and generally just enjoyed being alive and breathing in fresh mountain air for a few minutes before packing up. 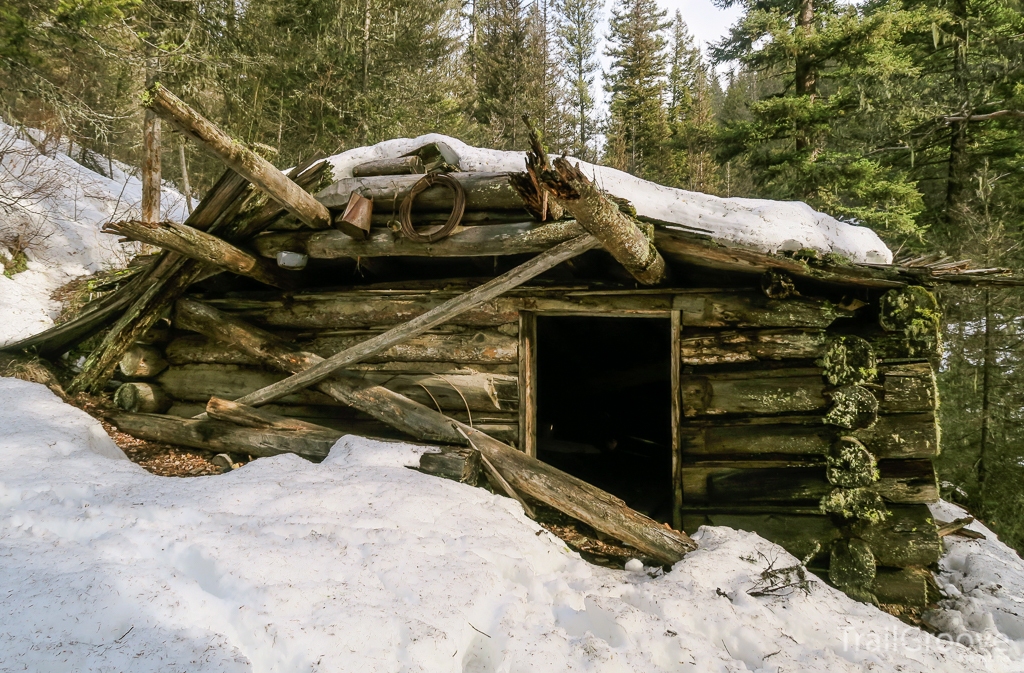 Other than the distinct pleasure of putting my warm feet into damp, cold boots the hike out was relatively unremarkable. I was able to get into a good rhythm hiking through the tracks I’d made on my way in and made decent time. As is always the case with backpacking trips, I arrived back at the trailhead in greater spirits then when I had left and without an ounce of regret. However, the postholing and sloppy conditions of the trail did remind me that there is such a thing as "too early" in the season for backpacking in certain landscapes. Whether or not I will remember this lesson next April is anyone's guess.