We shuffle off the bus and melt into a crowd of tourists, all headed for the perfectly framed view of the Maroon Bells surrounded by bright yellows and greens. Just a minute from the parking lot and we’re already sold on our three-day adventure. More commonly a four-day trip, the Four Pass Loop is one of the most popular – and most photographed – backpacking routes in the United States. 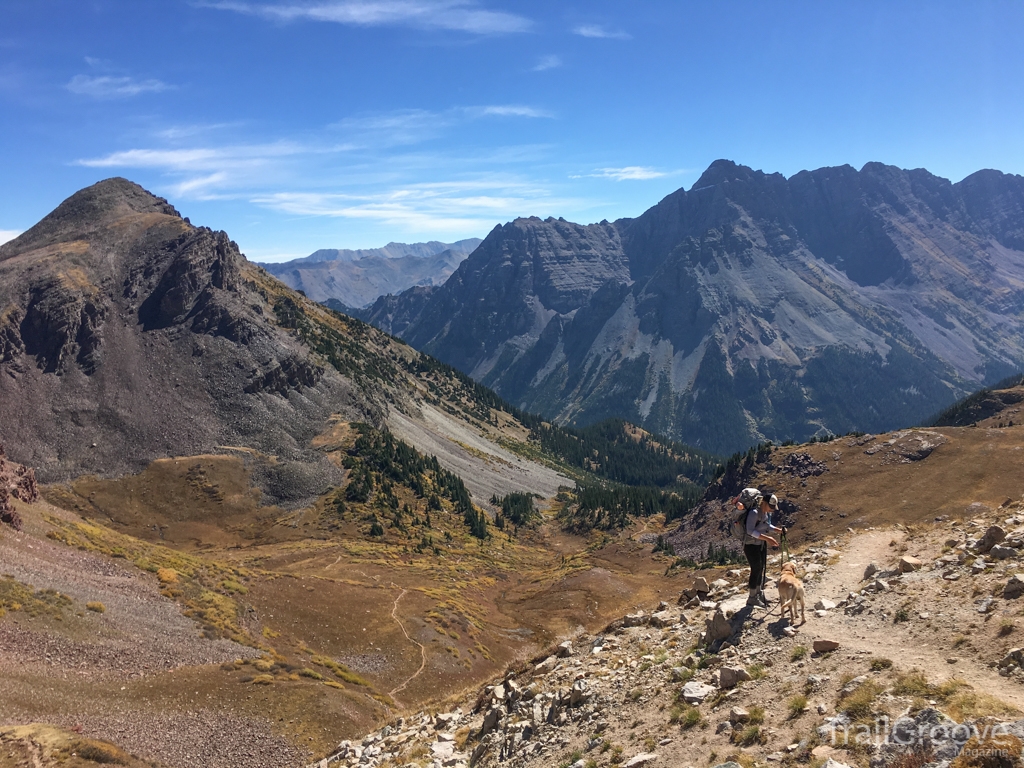 The 28-mile trek takes hikers over four mountain passes, ascends and descends over 7,800 feet, and challenges even the most experienced of adventurers with its constantly changing conditions and frequent mid-afternoon summer thunderstorms. It’s no wonder they’re nicknamed the “deadly Bells.” We’d waited for a clear weather window, but these mountains still had a lot in store for us.

Our first day leads us through the peaking aspens and over two of the four passes. We begin climbing almost immediately from the trailhead at Maroon Lake, energized by a good night’s sleep and the excitement of the day and too awe-struck to notice the weight of our heavy packs on our backs. At 1.4 miles, we hit Crater Lake – a dried-up landmark on our map that means it’s time to head west. We opt to do the loop clockwise to avoid a notoriously challenging ascent up Buckskin Pass, assuming a steep downhill will be much less exhausting. We blissfully navigate forests of thick yellow and began crawling up mellow, rocky slopes. Soon enough, they begin switchbacking and we catch an intimidating glimpse of our first mountain pass: West Maroon. 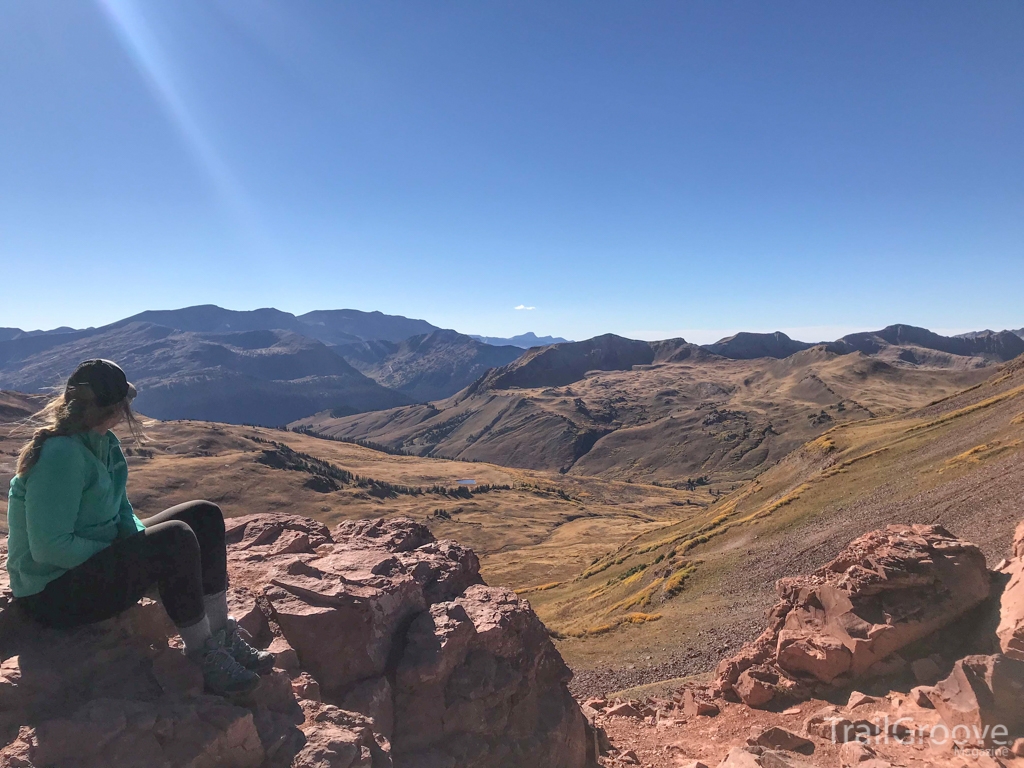 We had done significant research and prep before heading out, including purchasing a topographical map, downloading digital maps, and even tracking our hike using two cell phone apps. That said, we couldn’t figure out how far we would have to travel on our first day. Apparently, not many hikers do the Four Pass Loop in only three days, so the mileages and trip reports just didn’t add up. We figured it would be anywhere from 10 to 13 miles to Fravert Basin, where we intended to camp, but we had no idea how challenging our day-one itinerary would be.

Once we begin ascending West Maroon Pass, our pace slows significantly. It’s mid-afternoon, and we haven’t eaten a proper breakfast or lunch. I’m already delirious. We pull over to the side of the trail and dive into a hearty meal of Clif Bars and gorp – definitely not what my body wants – and push upward, determined to hit camp before dark. We crest the first pass with high spirits, stunned by the impressive view on the other side. The trail seems to dip and dive into the valley below with no sign of re-ascending another, but there’s still plenty of sunlight remaining. 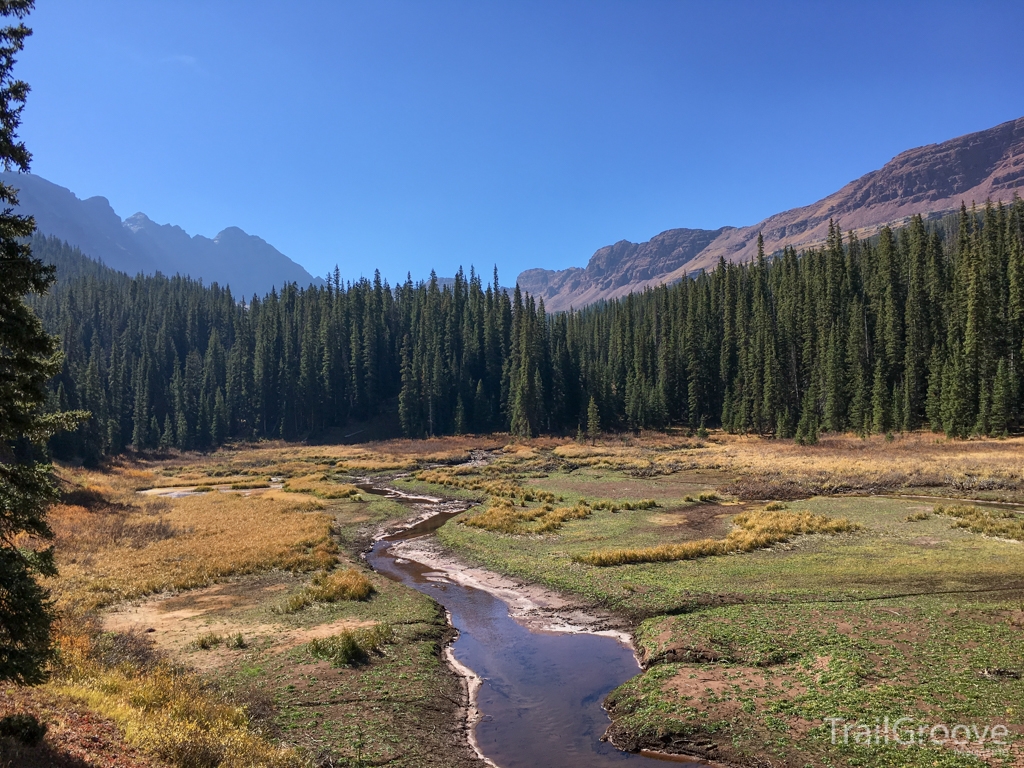 After a painfully steep descent, we continue on toward aptly named Frigid Air Pass. As we start another climb, the wind picks up significantly, pushing back against each step forward. Only motivated by the thought of my next meal, I force my hiking partner, Andrew, to step off the trail and cook us a real lunch: ramen noodles. In the distance, I notice a bright orange tent against the green backdrop of the valley – nestled up against a dream-like lake, peaks forming a perfect circle around the campsite. Can’t we just hide out here tonight? I toy with the idea for a short second before realizing Andrew’s already begun stuffing things back into my pack. At least full and warm again, I summon the willpower to continue upward.

Once we complete the long and arduous ascent up Frigid Air Pass, we crawl over the ridge just as the sun is setting. It transforms the maroon peaks into dark silhouettes and we can’t help but pause to take it all in. For a moment, all that matters is the remarkable stillness and silence in the mountains, and we don’t care what the lack of light means for the remainder of our descent to camp. 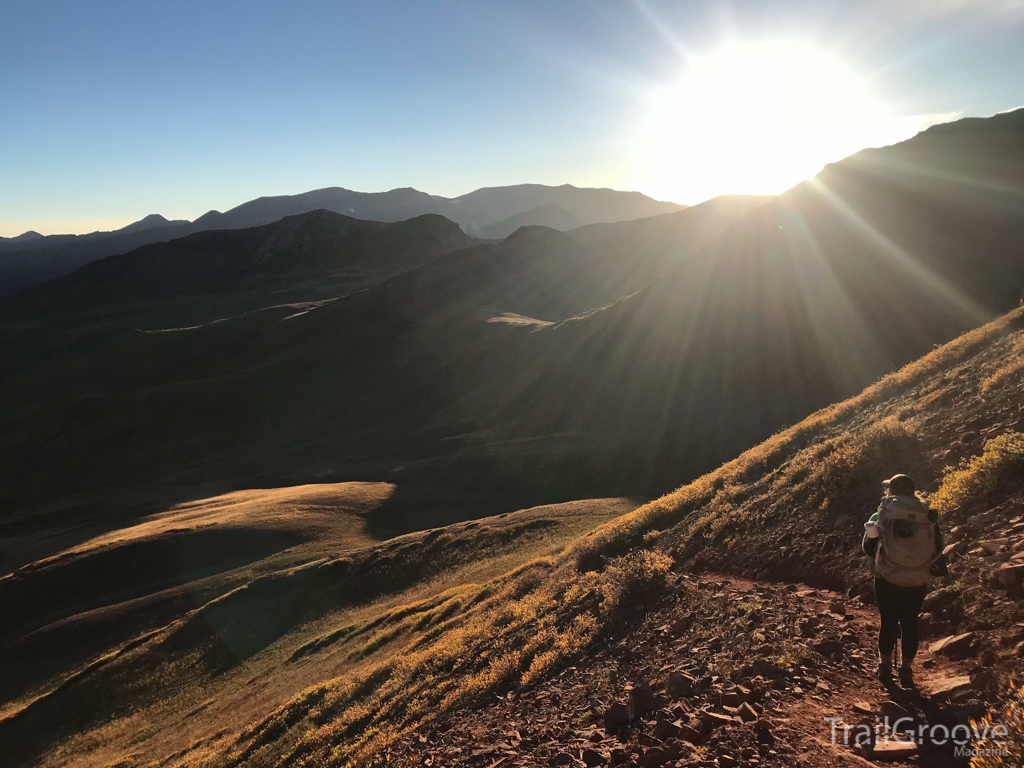 The next few miles are a blur – we trudge on mostly in silence, only stopping to don our headlamps, hats, and gloves before entering a pitch-black evergreen forest that supposedly houses at least a dozen campsites. The temperature is dropping quickly and there are no signs of other campers nearby. Our map tells us that we should realistically be surrounded by sites, but there are no noticeable signs or packed-down paths leading away from the main trail. Finally, we come across a wide, flat clearing directly next to us, and a few tents appear in my spotlight about 100 feet back. “We can’t sleep this close to the trail,” I objected, but after another 15 minutes of exploring our (lack of) options, we decide this is it: our home for the night. We walk our bear canister into the downed trees nearby, crawl into our sleeping bags, and shiver ourselves to sleep.

We wake up with the sun and our nearby neighbors, who explain they had spent two nights there and don’t think there were any other open campsites the night prior. What would we have done if this spot were taken? I wonder. There’s no way we could have continued for another eight miles. After a hearty breakfast and giving the necessary thanks to our camping gods above, we hit the trail. Day two’s agenda: ascend another 2,000 vertical feet over Trail Rider Pass and camp near an alpine lake. 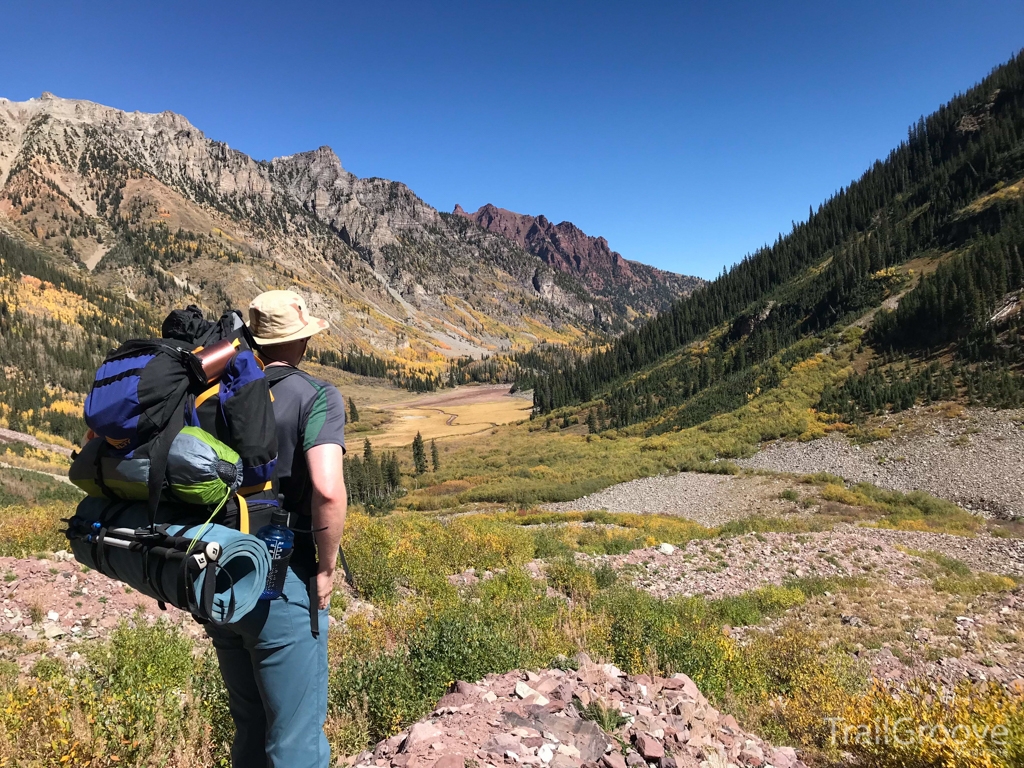 It’s a slow and painful start. Our bodies ache, our legs sore from the unexpected torture we put them through yesterday. I silently wish we’d opted for the four-day option, and wonder aloud if another night in the wilderness is worth it. Always, I think. But Andrew pulls me back to reality quickly – we both have jobs, and as refreshing and energizing as it is being out here, part of the allure and magic is the fact that we don’t get to do this very often. We continue our long walk.

After what seems like a steady and continuous uphill climb for most of the late morning, we drop into a stunning valley: an alpine lake envelops its middle, surrounded by towering peaks on all sides. We look across the way and spot what look like ants in the distance, crawling up a switchbacking trail at a painfully slow pace. At first, we think they’re ascending a Fourteener – a  14,000+ foot mountain fairly common in the Rockies – but upon closer inspection, we realize they’re not on another trail. They’re on our trail. We haven’t even made it halfway up the pass yet. We break for noodles, watch our dog splash through the green-blue water of the alpine lake, fend off sleep while lying in the warm sun, and regain motivation.

Trudge up the pass. Descend into a stunning valley dominated by the lake. Scramble past a field of loose boulders. Race down the final approach into camp to snag one of the last designated spots. Pitch our tent. Crawl to the shore to cook a meal just as the sun lowers behind the peak above us. Our minds and bodies are exhausted, barely able to perform basic functions or form full sentences as we brace for another frigid night. But as our heavy eyes begin closing with a tent-door view of the expansive lake next to our encampment, none of that matters. 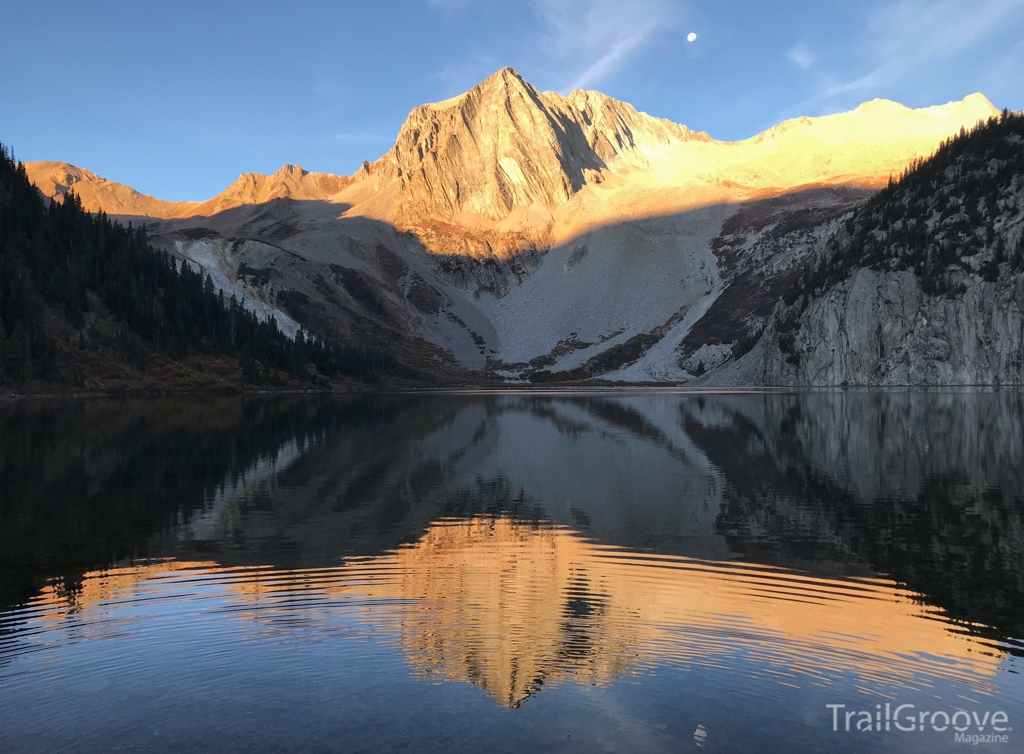 We don’t rush to leave camp, instead opting to bask in the peaks’ symmetrical reflection in the water as we finish off what remaining food we have: a dehydrated pad-Thai meal, cinnamon oatmeal, instant coffee, and peanut butter. In the minds and stomachs of two hungry backpackers, this is indeed a final-day feast. Satisfied by our eclectic meal and the resulting amount of weight we’ve cut from our packs, we say goodbye to our perfect campsite.

We fly past almost everyone that had left camp earlier that morning, determined to make it back to the trailhead with plenty of time to down beers and burgers in Aspen before a long drive home. And before we know it, we’re thanking ourselves for choosing to descend Buckskin Pass instead of climb it. It’s miles and miles of steep, painful downhill. Our legs beg us to stop, but with each camera-wielding, backpack-less tourist we pass, we realize we’re getting closer. Finally, the view that stunned us three days ago as we hopped off the bus rewards us with another appearance. Equally as awe-struck, we stop at the main viewing area and stare at the surrounding peaks. It’s hard to fathom how expansive this range is, and I struggle to make the final march toward the bus. 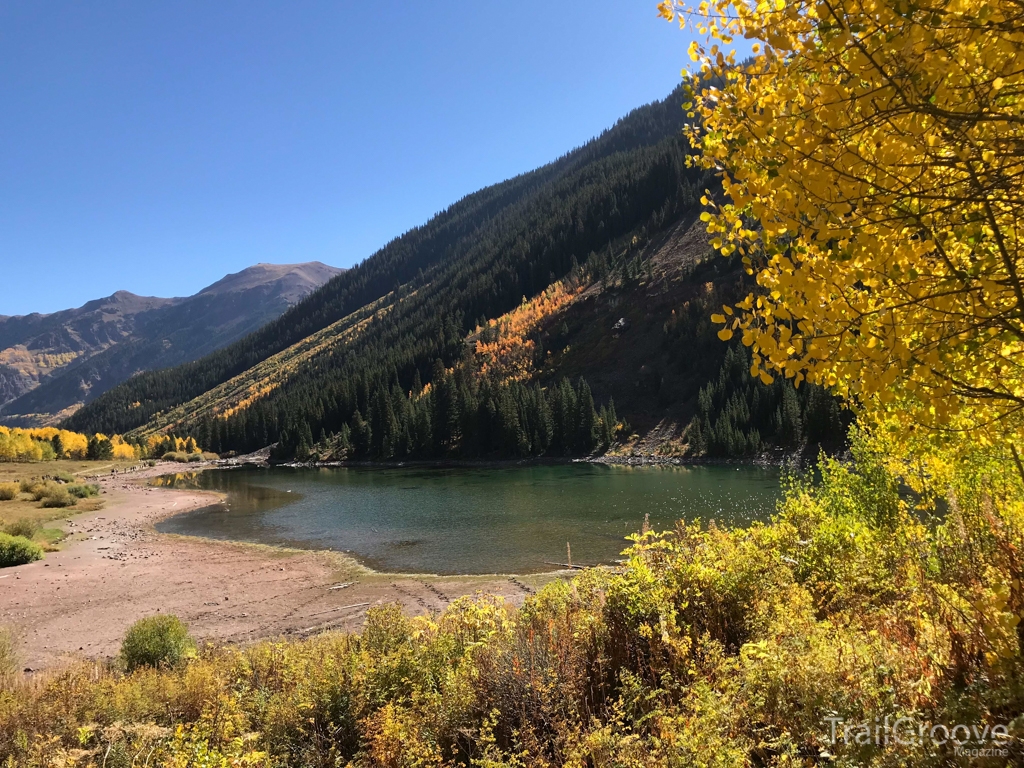 In three days, we’ve experienced every type of terrain from scenic forests to wildflower-covered meadows to barren, rocky mountain passes and crystalline alpine lakes. We’ve climbed thousands of feet, descended the same amount, crossed innumerable streams and creeks, fallen asleep under clear night skies, and found ourselves in awe over the hump of every mountain pass. It’s truly been one of the most spectacular trips to the mountains, and we stare out the window of the 3pm shuttle back to town wondering when we’ll reunite with this jaw-dropping range. Hopefully, soon. But first, burgers.

Information: Entrance is $10, but the Maroon Lake parking lot often fills up by early morning throughout peak seasons, so parking is only allowed before 8am and after 5pm. A shuttle runs every 20 minutes (June 9 through October 8) from nearby Aspen Highlands Ski Area along Maroon Creek Road. Tickets can be purchased next door at Four Mountain Sports for $8 round-trip (more info here). Lodging and restaurants are available in nearby Aspen. Camping is allowed at many marked, designated spots along the trail, or at least 100 feet from any body of water. Wilderness permits are required and are available at the trailhead ranger station or by self-registration at the trailhead if you’re arriving after-hours. Water can be filtered at most points along the trail, but keep in mind that many streams and even lakes included on maps might be dry in late summer months. Bear canisters are required for the trek. More information on the trail can be found here.

Best Time to Go: Summer is the peak season, but early afternoon thunderstorms are common – it’s safest to be over any pass before noon, at the latest. If you’d like a bit more wiggle room, early fall offered spectacular and unparalleled views of the changing aspens (sans storms). Temps dropped to around 15-20 degrees Fahrenheit at night, but days were still mid-70s.

Getting There: The Maroon Bells-Snowmass Wilderness is located just outside of Aspen, Colorado. From downtown Aspen, take highway 82 for .5 miles west before exiting the roundabout onto Maroon Creek Road. From here, it’s another 9.4 miles to the parking lot. If you’re instead planning to shuttle from Aspen Highlands Ski Area, it’s only 1.5 miles on Maroon Creek Road.

Books and Maps: A National Geographic topographical map for Maroon Bells/Redstone/Marble can be purchased for $12 – we found it extremely helpful in figuring out where we were in relation to marked campsites we could only find on non-topo maps online. When paired together, the combo worked perfectly. There are also several other books on hiking Colorado’s many famed Fourteeners in the area, if you’d like to tack on any major peaks during your camping excursion (and have the necessary training and gear). We passed trailheads for many of them including Pyramid, Maroon, and North Maroon peaks while hiking the Four Pass Loop. These are all more technical, class three and four climbs.

The Author: Sarah Nelson is a backpacker, volunteer outdoor educator, and journalist based in Boulder, Colorado. Follow along for more of her adventures at @sarahhlynne.