With backpacks loaded and my friend Drew in the passenger seat, both of us eager to head to subalpine lakes with hungry trout, I turned the keys in the ignition and proceeded to break one of my cardinal rules of backpacking: don’t start in a trip in the middle of a holiday weekend. As advantageous as having an extra day off work to extend a backpacking trip is, if you’re spending that time on a crowded trail only to end up at an area where all the best campsites are taken the “victory” is at best bittersweet. I usually take precautions to avoid that outcome – picking remote destinations, getting a head start and being deep in the backcountry by the time the weekend rolls around, or going to a national park where the backcountry campsites are crowd-controlled by permits. Neither of those were options for this particular trip, we rolled the dice, rolled out of the driveway, and hoped for the best. 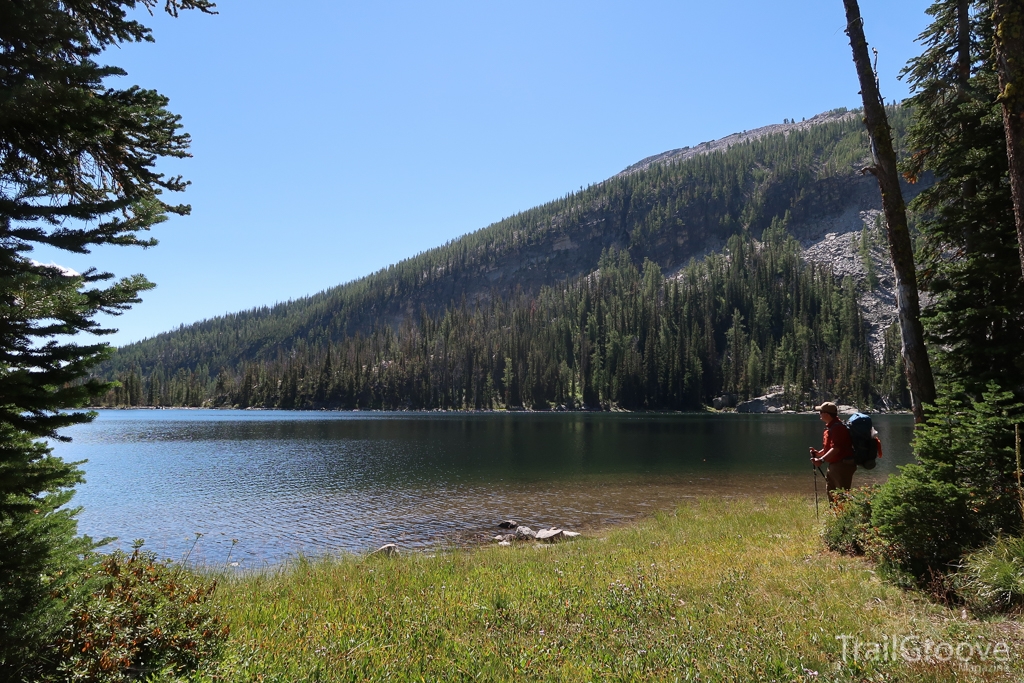 One of the perks of living in a small city on the edge of a 1.3 million acre wilderness area is that if you arrive at a trailhead that is a bit too crowded for your tastes, you can simply drive a bit further to another one without delaying your hike too much. Our plan was to head first to the most appealing trailhead for the type of trip we desired – a trip featuring lots of fishing and not much more hiking than necessary. If our first preference had a packed parking lot, we would just drive a half-hour to the next trailhead, potentially repeating this process a time or two until we found our spot. One of the great luxuries of the Rocky Mountain West. Making this plethora of option sweeter was the fact that, unlike our trip to Yellowstone the previous week, no permits were required. It was simply a “choose your own adventure” situation with no park entry fees to be paid, campsites to be chosen, or miles to be covered regardless of weather conditions or energy levels.

Although there are virtually endless options for backpacking within a few hour drive, I often find myself returning to the same lakes year after year, and sometimes within the same season. Sometimes this is to introduce others to the beauty of a place that I’ve grown fond of, or to be able to plan a trip for a novice backpack where I will more or less know what we will be getting into, or out of the sheer convenience of its location and the time involved in reaching the main attraction. Certain places tend to shine in certain seasons as well. While the lakes we hoped to visit were wonderful in summer, they are truly spectacular in late autumn when the needles of the larch trees turn gold before falling to the ground. 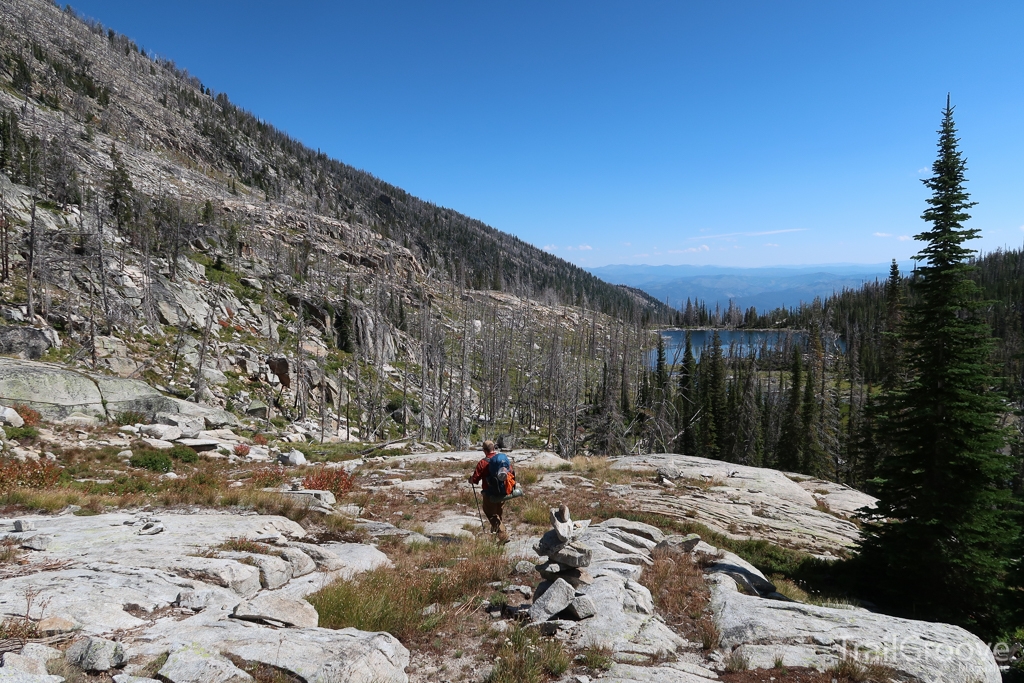 When we arrived at the trailhead on Sunday morning of Labor Day weekend and saw only two other cars, we celebrated our good fortune and contemplated going back to town to purchase a few lottery tickets. The trailhead, less than an hour outside of town and with almost half the driving on a gravel road, is usually one of the more popular destinations for quick trips or family backpacking excursions. The canyon it provides access to is almost too good to be true. Hosting several lakes (four with good fishing), a beautiful stream, a lofty peak with several minor summits on adjacent ridges, and enchanting larch forests in late September, the canyon can reasonably be viewed as a microcosm of much of the high country of the Bitterroot Mountains. A moderate three-mile trail leads to the first lake and the others are reached by bootpaths that are more intriguing than intimidating. Our destination was the third and highest lake in the trio (the other two lakes are separated from the primary chain of lakes) which arguably has the best fishing and the most spectacular scenery. We allocated plenty of time to get there, as the lower two lakes are fun places to wet a line and get some practice catching the small cutthroats before heading up to the larger fish at the upper lake. 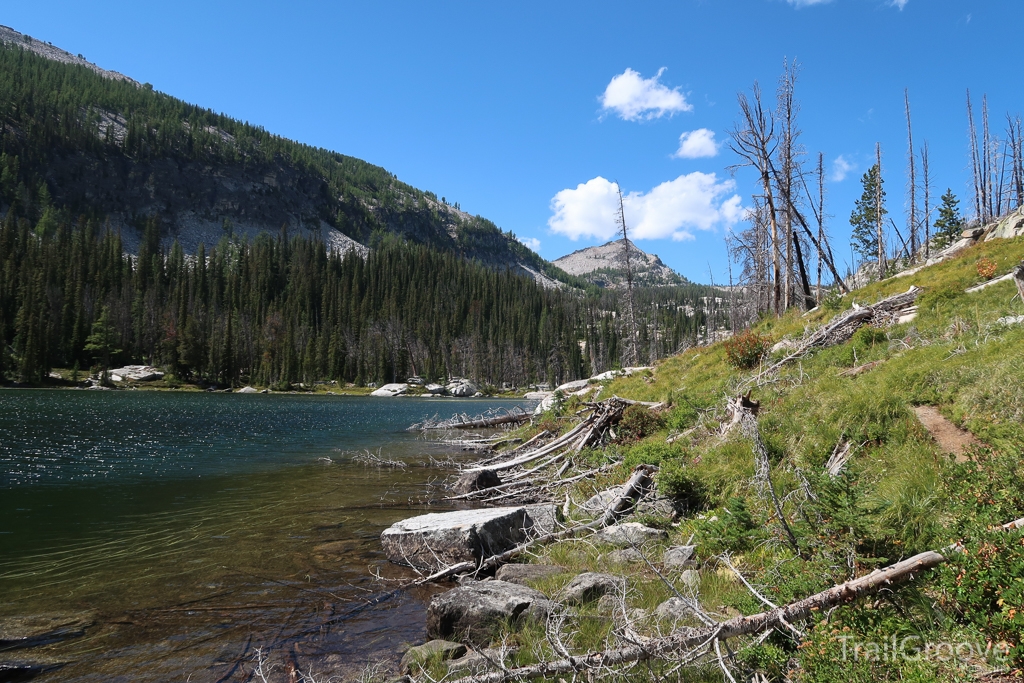 In no rush, we plodded along the pleasantly graded trail, occasionally pausing to eat a few of the ripe and brilliant red thimbleberries. Just shy of the halfway point to the first lake, we met a backpacker headed out. Our odds of having the upper lake to ourselves, which were already looking pretty good, had just doubled. Energized by our good fortune, we kept up our pace and soon arrived at a quintessential subalpine lake on what can only be described as a perfect summer day in the mountains. Temperatures in the mid 70s, light breeze, and no clouds in the stunningly blue sky. The icing on the cake was seeing trout rising on the glassy water, well within casting distance, and no one else in sight.

Easing our way along the talus slope on the northern shore of the lake, we stopped often to take advantage of the plentiful room for a backcast. After getting a good warm up of our casting arms and hook removing fingers, we took a lunch break before starting up the faint path to the upper lakes. Adequately but not obnoxiously marked by cairns, the path gained elevation quickly over granite slabs after exiting the patch of forest that clung to the inlet stream. Combined breaks for catching our breath and admiring the scenery slowed our progress, but we reached the middle lake without being too far behind on our non-existent schedule. Relying on the notion that if a lake has fish, and there is daylight, then there is time to fish, we put the lines back on our Tenkara rods (an excellent rig for backpacking) and tossed some flies on the water. Finding ourselves just as successful as we were on the lower lake, we enjoyed an hour or so of relaxed angling bliss before shouldering our packs and heading to the uppermost lake. 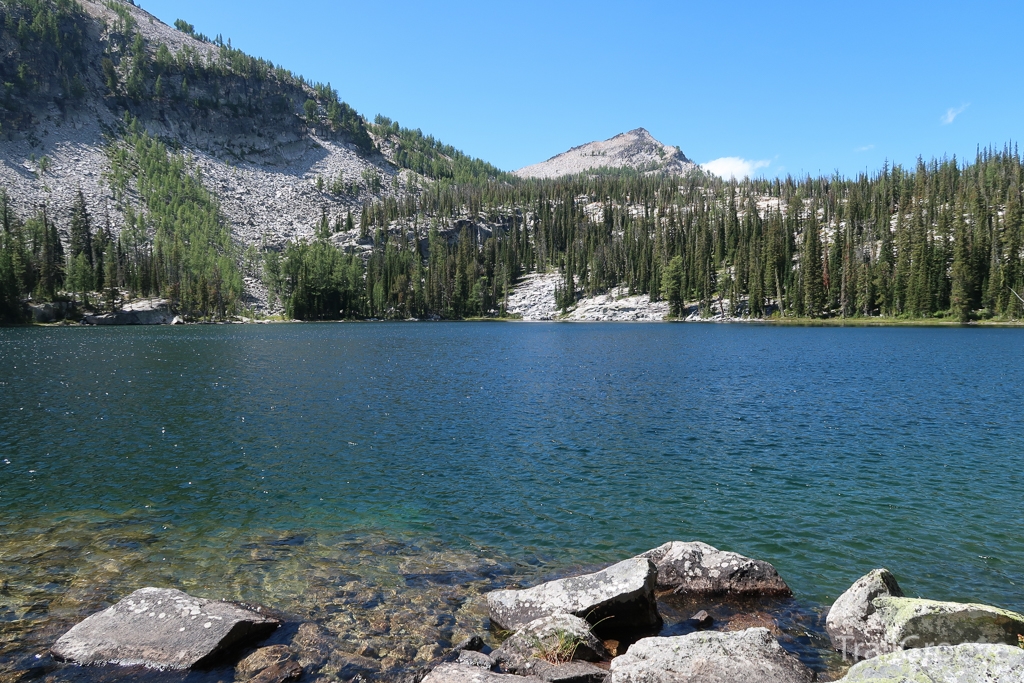 The push to the final lake went much quicker than from the lower to the middle lake and we arrived at the unoccupied and awe-inspiring body of water just as the sun reached its highest point in the sky. Rising and sizable trout tempted us on our way to scope out campsites and, as expected, we were unable to resist. A crisp and refreshing swim washed off the sweat from the hike and refreshed us for the minor camp chores and a long afternoon and evening of fishing and soaking up the subalpine splendor. Taking time to scope out the best campsite, we set up our tents on a small rise with a commanding view of the lake and near a small granite peninsula that was a perfect spot to cast from. 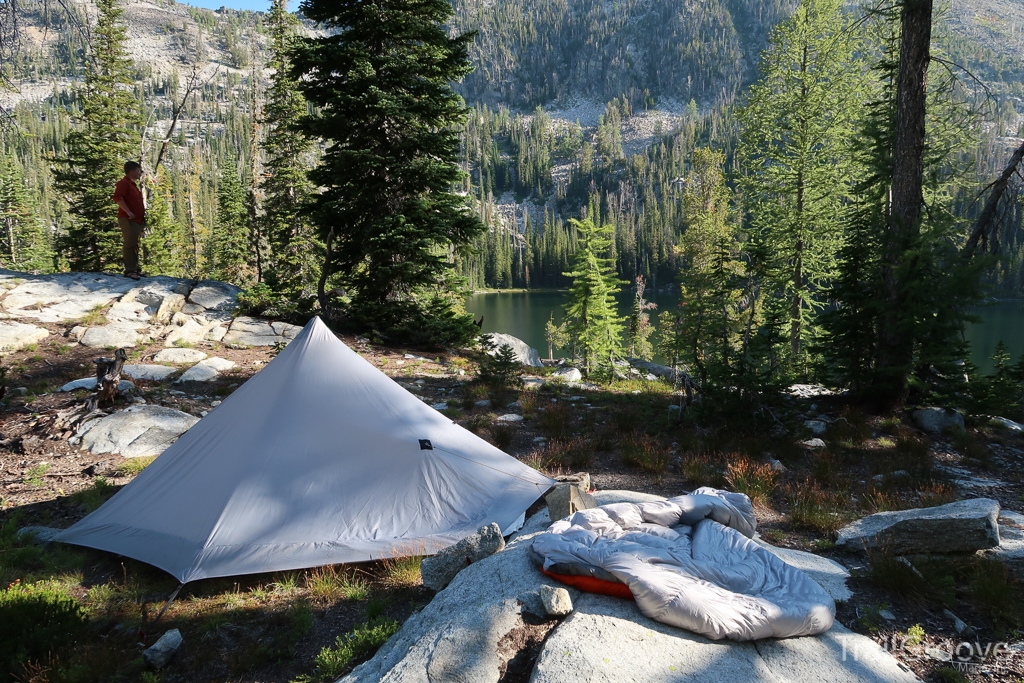 With camp set up and hours of daylight ahead, we waded into the cold but tolerable waters to fish a drop-off where the water deepened quickly and a cold inlet stream pushed oxygenated water, and whatever bugs it had picked up, to the center of the lake where larger trout swam. This was Drew’s first experience with camping and fly fishing at a mountain lake – each activity being outstanding on its own, and when combined, far exceeding the sum of its parts – and few things could have gone better. No mosquitoes, ideal weather, eager trout, no crowds, and no rush to hike out the next day. Late in the evening, our hunger became more of a priority than catching fish, so we traded our rods for stoves and cooked up dinner as twilight settled over the mountains. The stars eventually became as enrapturing as the fishing had been and we stared upwards until we had no choice but to either involuntarily fall asleep under them or head to our tents. We reluctantly but prudently chose the second option.

Awakening to a mild morning, we once again marveled at our good fortune. An almost empty parking lot, uncrowded trails and campsites, blue skies overhead – a perfect holiday weekend trip. Making the most of it, we took our time packing up and enjoyed a leisurely breakfast and more fishing before beginning our descent. Just as we were leaving the lake, three hikers descended from the larch-filled basin above the lake. Our paths crossed again while we fished the lowest lake. Their dayhike was a long but rewarding route that I was familiar with – it passes four lakes, summits a peak, and features a three-quarter mile ridge walk on stable talus. On our way out, we passed nearly a dozen hikers headed in to enjoy a nice forest walk on Labor Day and arrived at a trailhead with four times as many cars as when we had left.

In the decade I’ve been backpacking, I’ve had some memorable Labor Day trips: a half-foot of snow falling overnight in the Beaverhead Mountains in Montana, starlit soaks in lonesome hot springs in Idaho, a smoky traverse of North Cascades National Park, and a cozy campsite in the Beaver Creek Wilderness of Kentucky. The subtle perfection of this trip makes it a worthy addition to that list and a type of outing that I’ll be trying to repeat in early September for years to come.


Information: Trailhead access in the Bitterroot Mountains and the Selway-Bitterroot Wilderness is often best suited for higher clearance vehicles and for those who have a sense of adventure, but more accessible trailheads can be found. The area offers an array of outdoor exploration opportunities – from backpacking to fishing to hot springs; see this Issue 41 article for more on the area.

Best Time to Go: The Bitterroot Mountains are typical for the Rockies in that prime backpacking season can be found from approximately mid-June to September, snow pack and early fall snow permitting. At other times of the year, winter conditions can be anticipated.

Getting There: The Bitterroot Mountains and Selway-Bitterroot Wilderness can be explored via Highway 93 (east) and Highway 12 (north) and from the cities of Darby, Hamilton, Missoula, and Stevensville.

Maps and Books: The Forest Service publishes their Bitterroot National Forest North Half and South Half Maps, and Cairn Cartographics also has this option available. For a guidebook, see Hiking the Selway-Bitterroot Wilderness by Scott Steinberg.