We had been warned that the Three Fingers Lookout wasn’t for the faint of heart. But that didn’t take away from the shock of first seeing it. The hut was just a speck in the distance, perched precariously on a jagged spire of rock rising up above a crevasse-riddled glacier and a low sea of clouds. From our vantage, it seemed impossible that the wooden hut could balance there for another night, let alone that there would be a passable trail to reach it. 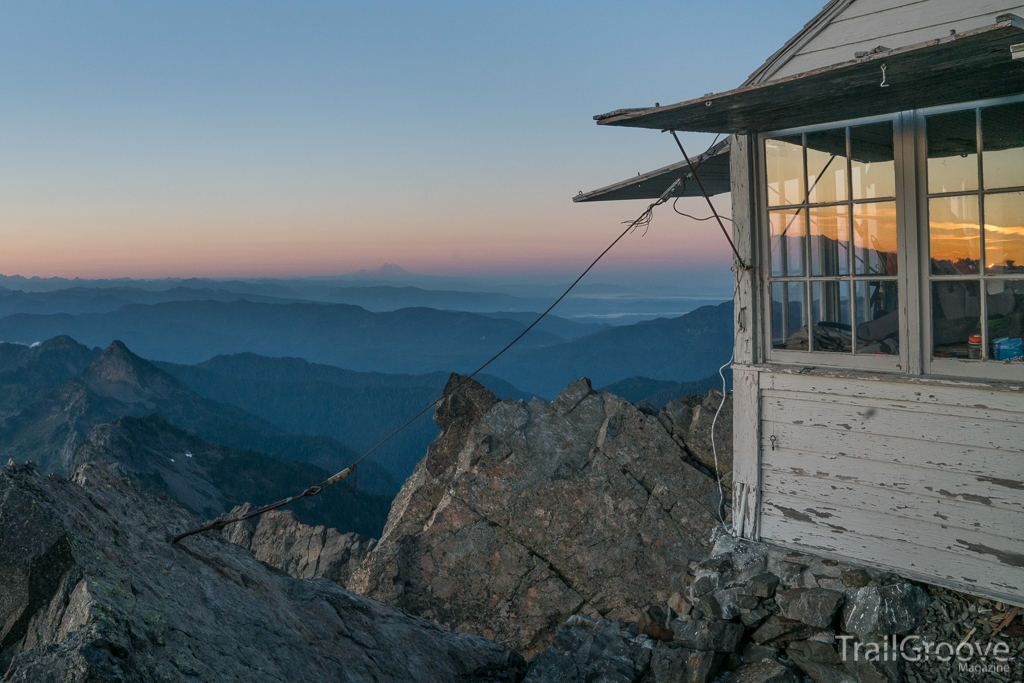 My partner, Emily, and I had gotten hooked on the idea of visiting this 89-year-old lookout, in Washington’s Boulder River Wilderness, after a friend made the journey. She described needing to keep the windows closed for fear of falling out of bed and over a 2,000-foot cliff, and then showed us a photo of the panorama of the North Cascades. We were sold on the trip.

Reaching the lookout doesn’t require technical climbing, but it wasn’t going to be straightforward, either. To start, the road to the trailhead was washed out, leaving a 10-mile mountain bike ride just to reach the trail. Neither me nor Emily are mountain bikers, so we borrowed bikes from friends – hers too large, mine too small. What better way to learn how to mountain bike than on frames that don’t fit, loaded down with overnight packs, in a classic Northwest drizzle? The road was just uphill enough that my legs and back started burning after just a few minutes of pedaling. With a loaded pack, though, I couldn’t stop for fear of never being able to get the bike moving again. I was pretty excited when we arrived at a brushy opening into the forest, much sooner after leaving the car than I had expected. 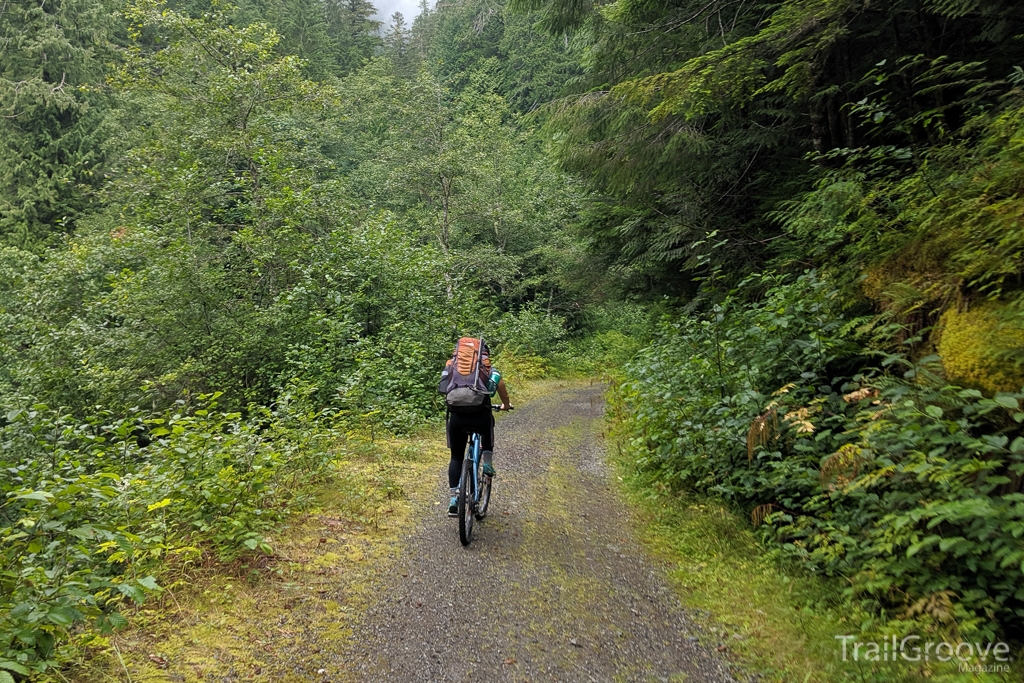 If it seemed too good to be true; that’s because it was. After a few miles on the trail, we were still in the forest. I was beginning to feel suspicious – the route was supposed to be 7.5 miles to the lookout, yet we were still a long way even from the basin that it sits above. My GPS clearly showed a trail snaking its way from our position to the lookout, but we had hardly made a dent in the route after hiking for more than an hour. My questions were answered when we ran into another pair of hikers, who told us that in fact there are two different trailheads that lead to Three Fingers. The one we had been planning to start at was located several miles further up the road. The one we found started 15 miles from the lookout.

After that revelation, the next few hours were a fast-packing blur. It was early afternoon and we had more than 10 miles and 4,000 feet of elevation to cover on foot – more than we had originally planned for, even after the time we had already spent hiking. The blur came to an abrupt halt three hours later when we reached the Tin Can Gap and got our first view of the Three Fingers Lookout. After how far we had come, it still seemed impossibly far away. Plus, we knew that this would be where the straightforward trail ended and the rock and snow scrambling began. 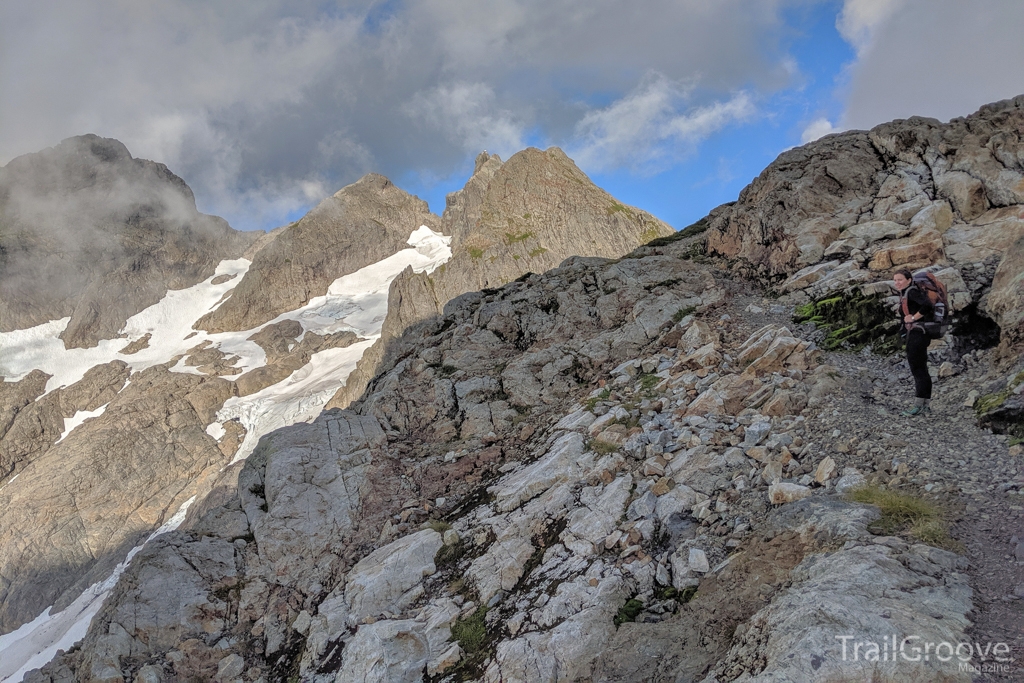 Almost immediately, we transitioned into a steep snow-filled gully, cresting the ridge before reconnecting with the faint trail. From there, the scrambling involved was thankfully more mellow than I expected. Earlier in the season, the crux of the route involves stepping out onto the icy headwall of the Queest-Alb glacier. But we found that the snow had pulled away from the rock, leaving a small space that could be easily navigated without crampons. We reached the base of the lookout about an hour before sunset. Entering the hut requires climbing a series of three wooden ladders held into the rock with pitons, rope, and metal wire. At the top of the third ladder, I stepped out onto a slab that, at its edge, falls into the abyss of the glacier 500 feet below. A worn rope led up to the lookout’s front door. 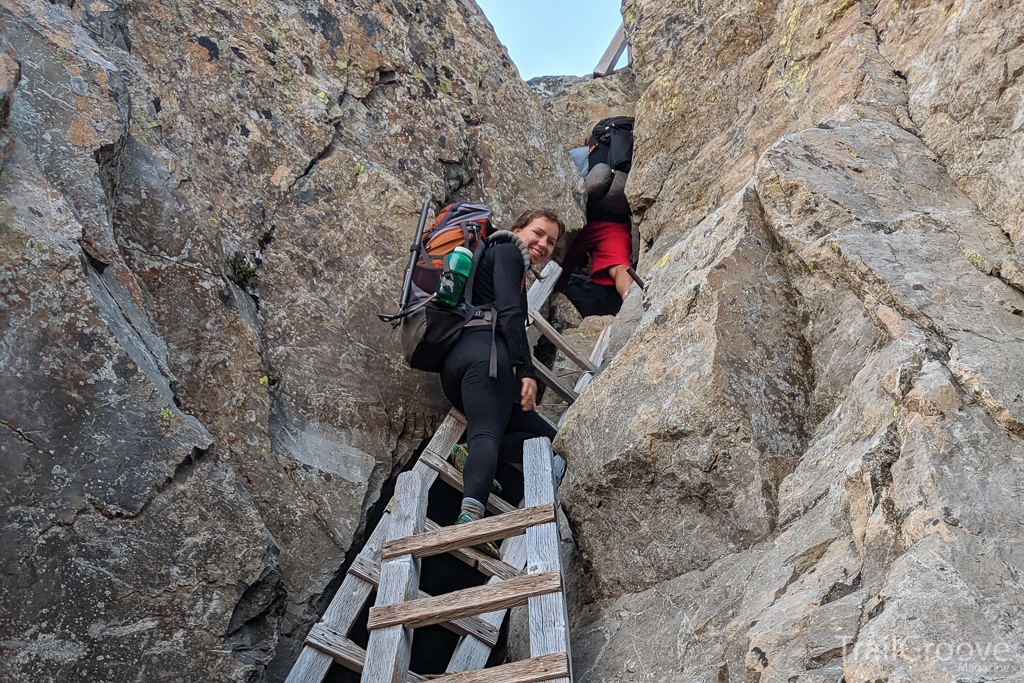 Even after Emily and I got inside the hut, it was hard to feel comfortable about where we were standing. The lookout extends past the rock platform on which it was built on two sides, and there’s only a small spit of rock outside the back door before the mountain tumbles several thousand feet into the valley below. But the exposure also allows for a view that is, simply put, unbeatable. The fog had begun to clear as we approached the lookout, and just before sunset it cleared away entirely. Out of the front door of the lookout, we watched the sun set over the Olympic Mountains and San Juan Islands as the lights of Seattle and the I-5 corridor grew in intensity. The North Cascades remained cloudy that evening, but we were treated to the sight of the sun rising over the shoulder of Glacier Peak out of the back door early the next morning. 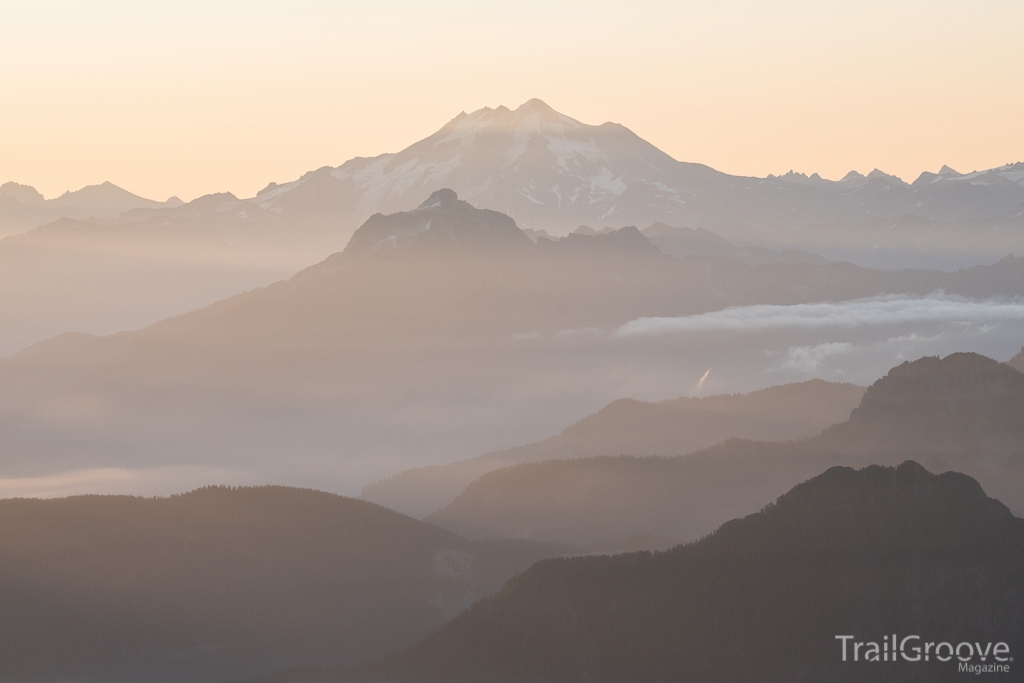 It’s still hard for me to wrap my head around how the Three Fingers Lookout has existed in this spot for nearly 90 years without being blown off the mountaintop. But for those willing to believe that the hut can survive another day, let alone another 90 years, the commanding views make it well worth the effort required to spend the night.


Information: There are no permits required to spend the night at the lookout. However, it is first-come first-serve and the hut does fill up on weekends in August and September. For more on backpacking to lookouts see this TrailGroove article.

Best Time to Go: The upper sections of the trail typically melt out in July, and the passage across the top of the Queest-Alb glacier opens in August. If you go earlier in the season, be prepared with ice axes, crampons, and potentially a rope to cross the glacial headwall. The lookout can also be accessed on skis throughout the winter.

Maps and Books: The Green Trails Map for the Mountain Loop Highway covers most of the Boulder River Wilderness, including the Three Fingers Lookout. National Geographic also offers a Trails Illustrated Map that details nearby North Cascades National Park, offering more exploration opportunities in the area.