While much of my backpacking gear sees turnover somewhat frequently as I test and review new gear in the field, I’ve traditionally remained quite dedicated to specific water treatment systems over the years. In fact, over the past decade I can count on one hand the specific models of water filters / treatment systems I typically turn to when packing for a trip (although there have been plenty of replacement cartridges or filters along the way). Rarely does a new water treatment contender intrigue me as a viable option or improvement over what I normally and traditionally carry on trips. 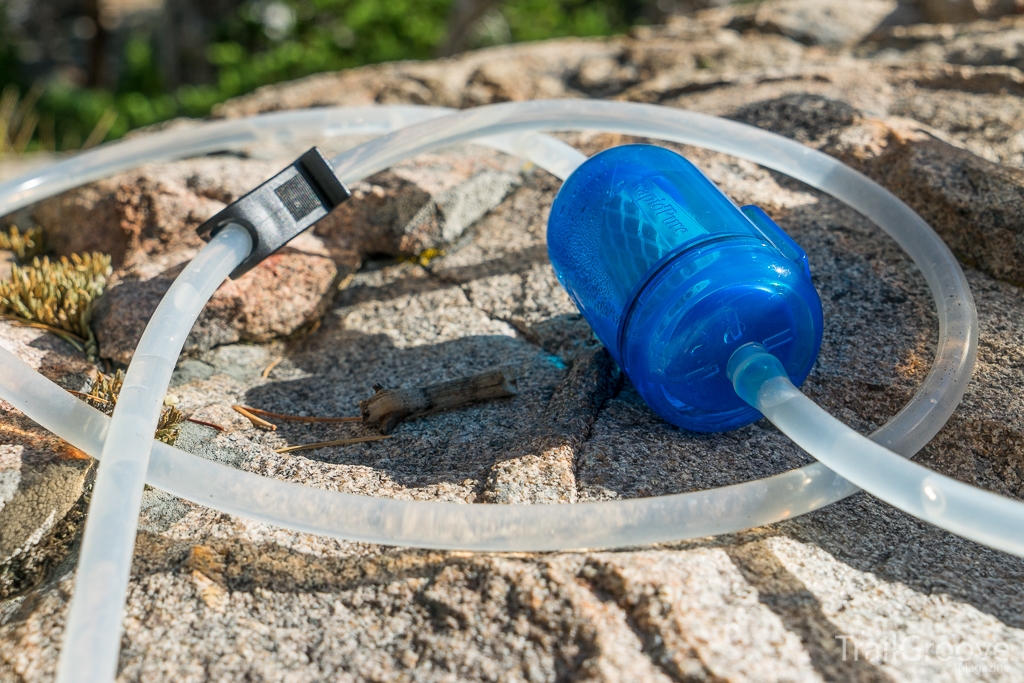 However, the RapidPure Scout inline purifier would be an exception. On paper the RapidPure Scout, brought to you by Adventure Medical, probably competes with or outcompetes whatever you are currently carrying – it’s a purifier, so unlike popular hollow fiber filters the RapidPure will not only take care of bacteria and protozoa, but viruses as well. Additionally, the RapidPure Scout is infused with carbon to improve both water quality and taste, and conveniently is rated by the manufacturer for freezing temperatures – if the cartridge were to freeze, it’s good to go. Only after multiple freeze and thaw cycles does the manufacturer suggest replacing the purifier cartridge – but only virus protection will be compromised at that stage. The system will continue to work like a traditional filter and protect from bacteria and protozoa even after it’s been frozen multiple times. Lastly, the RapidPure Scout weighs just 2.4 ounces (measured, dry) and costs about $30 with replacement purifier elements costing less than $20. It’s rated for 25 gallons of usage as a purifier, after which protection from viruses is not guaranteed. After the first 25 gallons the system is rated as a filter, offering bacteria and protozoa filtration for up to a specified 200 gallons. The system cannot be backflushed, and requires no maintenance after a trip with a silver-infused element that keeps your system from getting funky while it sits on a shelf. 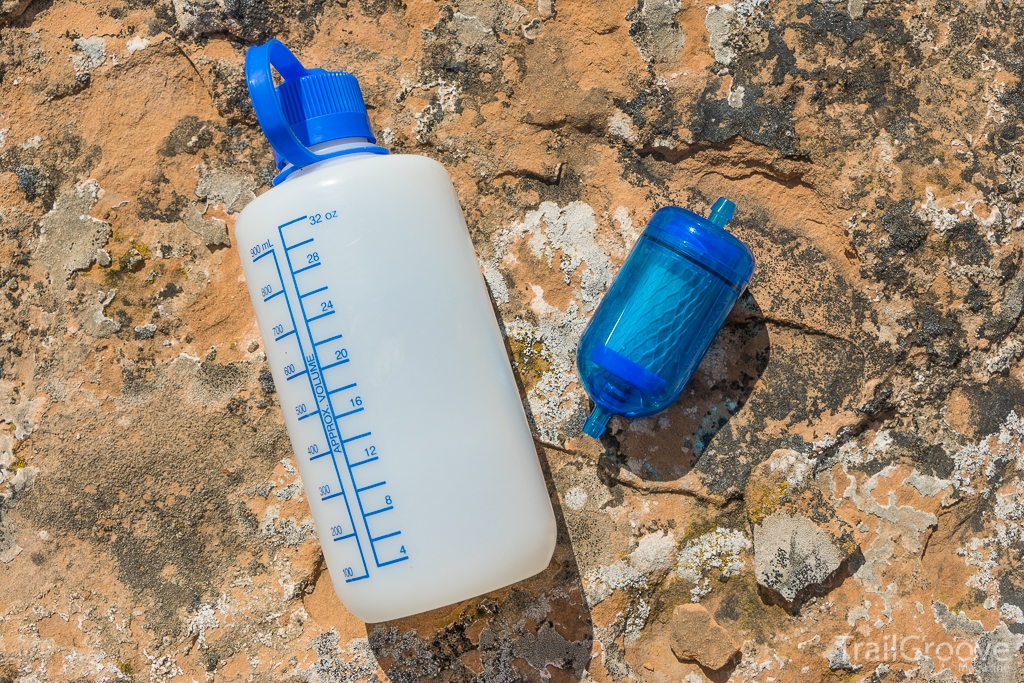 On paper this all works out quite well – 200 gallons will get most backcountry users through plenty of nights and multiple trips and while I don’t particularly need virus protection in the backcountry of North America, if I can get it without other drawbacks and even if it’s just for the first 25 gallons I’ll take it. And additionally, while I don’t need to pass my water over carbon where I typically like to backpack, it’s another plus to improve water quality. Finally, while I have to disconnect and toss my Platypus GravityWorks filtration element in my sleeping bag every night where it might freeze, and run a weak bleach solution through the element after each trip, one does not need to perform either task with the RapidPure Scout – who doesn’t like simple?

I recently tested the RapidPure Scout on a near week long trip and initially incorporated the element as a direct replacement in a Platypus GravityWorks gravity filtration setup where the unit plugged in nicely, although the size of the hose barbs that RapidPure utilizes makes disconnecting the housing from any tubing difficult. While you can opt for the RapidPure Trail Blazer, a gravity system that uses the same purification principles in a ready to use gravity setup with a larger cartridge, it’s quite heavy. The Scout is composed of a blue housing that connects to a hydration reservoir or gravity system, and inside the housing is the actual replaceable purification element. For initial setup you will need to open the housing, remove the plastic wrap on the element, then reinstall. This was initially puzzling as the printed instructions included in the package state to open the housing by turning to the left, leading one to believe it’s a threaded connection (it looks like multiple versions of instructions exist as well). Instead, you need to turn slightly to the left (mine arrived already turned all the way to the left in the unlocked position, a source of further confusion), then pull the housing apart as it’s not threaded, but rather a keyed and slotted design. After removing the wrap, the element is a press fit into the housing sealed by o-rings and is replaced easily. 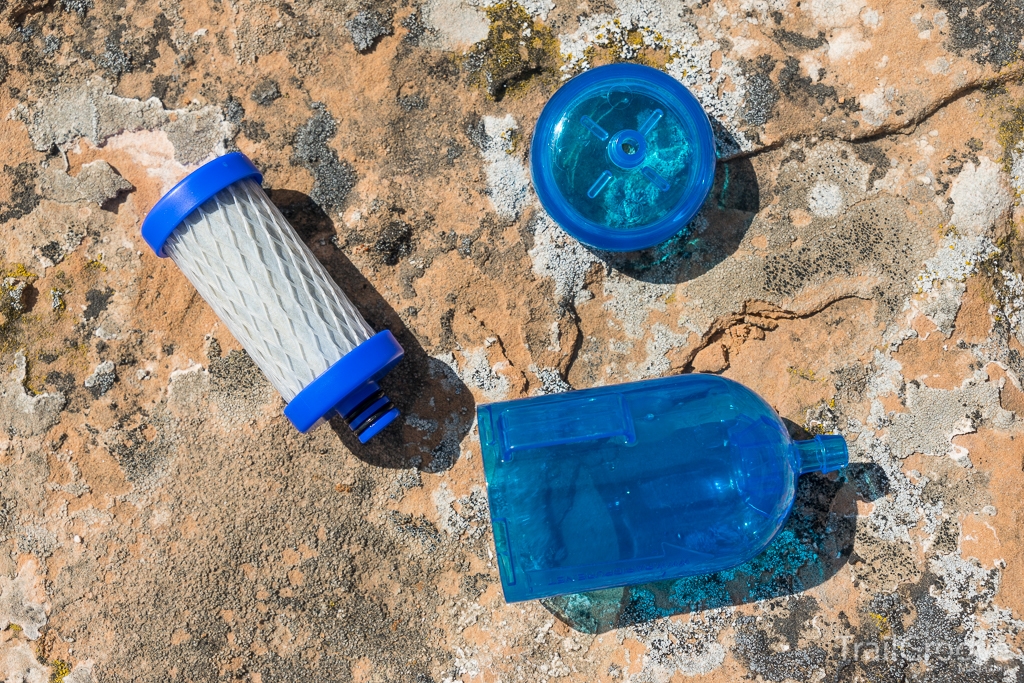 While most hollow fiber filters use a pore size of .1 or .2 microns for filtration, the pore size on the RapidPure is much larger at 1.75 microns. According to RapidPure, they claim this allows for flow rates 2-8 times faster than most hollow fiber filters. In order to achieve purification with the larger pore size, the RapidPure product line relies on electroadsorption technology, where particles smaller than this pore size, including bacteria and viruses, are attracted to and captured by the purification media. For the Scout, RapidPure claims a 1.2 liter per minute flow rate. Overall the ability and tech all reminds one of the venerable, but heavy First Need pump purifier.

Initially and using my Scout as a direct replacement cartridge in a Platypus GravityWorks system, with 4 liters of water in the dirty bag and with the dirty bag outlet set at 5 feet high, I achieved a flow rate of 2 minutes and 11 seconds per liter of water using what I’d describe as average Rocky Mountain water taken from a flowing stream high in the mountains of Wyoming – not a previously undiscovered mountain spring at the source, but not a cow pond along the CDT either. Visible sediment was zero with minimal detritus picked up from my scoop in the rocky stream. The resulting purified water was excellent, with any character of the water, good or bad, removed and reminding one of bottled water you’d pick up at the store. The initial flow rate wasn’t spectacular, but was workable. Conveniently as night fell and since the Scout can freeze, the only water treatment element I had to throw in my sleeping bag to keep from freezing was a spare Platypus GravityWorks element I’d brought along as a backup since this was my first time using the RapidPure. Of note is that if you choose to use the Scout in a gravity setup, the housing will retain 2-3 ounces of water and just about double the dry weight of the system. Most of this water can be drained by opening the housing (as I did) if desired before a day’s hike however. 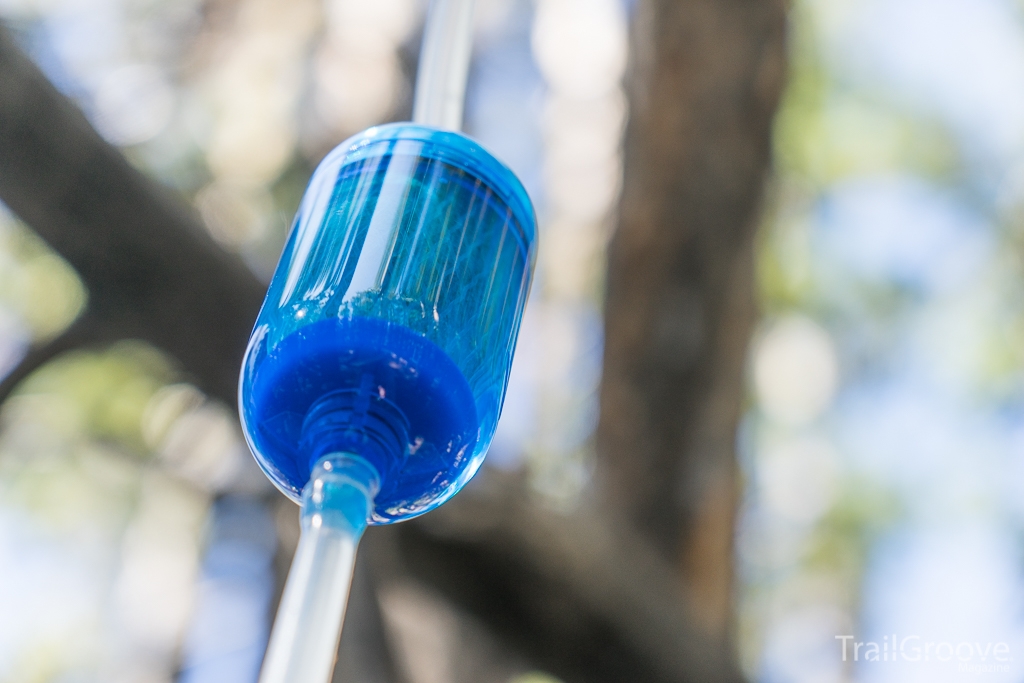 Even on the first night of this trip however, I did notice that the Scout’s flow rate began to noticeably diminish, a trend that continued as the trip progressed and more water was purified. Eventually the flow rate slowed to a frustratingly slow drip and was slow enough that I was waiting extended lengths of time for water to be processed, and the mileage I needed to make for the day would be jeopardized if I continued using the setup. This was all after processing just over 5 gallons of backcountry water. Unfortunately, you cannot backflush the Scout to restore performance and your options are mostly limited to swapping in a new replacement cartridge, which I didn’t carry along on this trip. I then attempted scrapping the gravity setup and using the Scout inline as well in a hydration setup, but while drinking was possible, it was much too difficult to work on a hike (although at initial flow rates, it would have been fine). I swapped in the backup hollow fiber filter I had luckily carried along back into my gravity setup to get through the trip, and tested the Scout further once back home. Testing (now with tap water in the dirty bag) revealed that the purifier was indeed nearly clogged – so much that I didn’t have the patience to time a liter at the same 5’ height as my original test. A bit like the old First Need purifier, once it’s clogged, it’s clogged. However, removing the Scout cartridge and rinsing it thoroughly under clean water and reinstalling did help, but in a limited fashion. After the clean water rinse I could at least now test the flow rate, and it took 11 minutes and 38 seconds to get through a liter, and rinsing does pose some cross-contamination considerations. 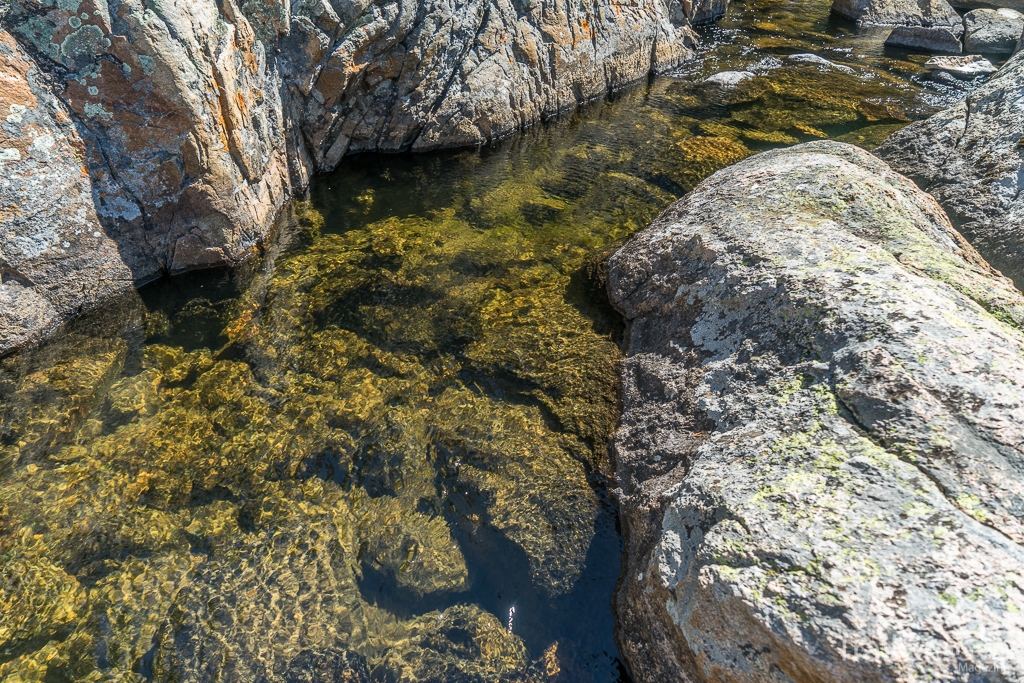 When it comes to the RapidPure Scout, the resulting purified water was excellent and the ability for the system to survive freezing is very convenient especially when it can freeze most any night of the year in a place like the northern Rockies. However, it seems that the purifier’s ability to remove so much from the water is also its biggest drawback. The flow rate and longevity of the element when processing normal backcountry water is limited, and combined with very limited options for maintaining this system in the field (mainly carrying spare elements) results in the Scout being quite limited in appropriate usage scenarios. For those backpackers who focus on overnights or solo weekend trips and demand the very best treated water, the Scout could still be an option if you don’t mind swapping in new elements for each trip. It could also be useful in a basecamp type scenario where you can leave it to treat water all day in a gravity configuration. The Scout could additionally serve in a setup where it was placed after a hollow fiber filter – the hollow fiber filter could protect the Scout and the Scout could then offer the carbon and viral protection that a hollow fiber filter cannot, for those hikers that seek such a level of water treatment. Speaking for myself however, I’ll be sticking to hollow fiber filters (and continue to begrudgingly throw them in my sleeping bag nightly) for the time being.

The RapidPure Scout retails for about $30. You can find it here at REI. Replacement cartridges go for less than $20 and can be picked up here. For more on water filters, purifiers, and water treatment in general, see our guide on backpacking water filters and best treatment methods.