Among its many inimitable charms, prime backpacking season in the Northern Rockies is also unfortunately defined by a cruel brevity. Try to hike too early in the season and you wind up postholing through leftover snow, anxiously evaluating raging creeks for the safest place to cross, and camping near lakes still thawing out from winter – adventuresome, but not exactly ideal. A few weeks later and things are more amenable to backpacking, but bugs (especially the biting kind) become so numerous that they can become a defining characteristic of a trip. In recent years, once the “peak” season for high country travel has arrived there accompanies it an uneasy feeling of being on borrowed time as local wildfires, or smoke from regional wildfires, threaten to make spending extended time outdoors an unpleasant, if not downright unsafe, prospect. By the time September rolls around, early season snowfall can throw a curveball into trips but a week later the snow will have melted and a blissful stretch of weather is forecast. Once October arrives, it becomes distressingly apparent that the next trip you take into the high country might very well be your last one of the season (aside from winter backpacking) as whatever snow falls in October above certain elevations is likely to stick around. 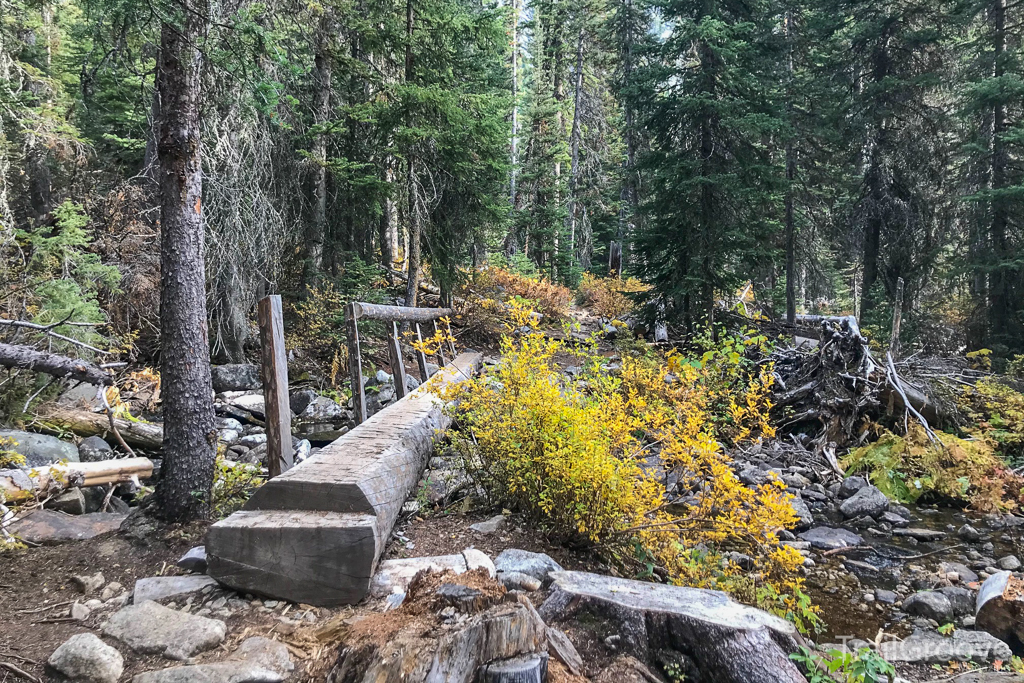 Put simply, if you don’t mind postholing on your first trip, risking snowfall and frigid temperatures on your last trip, and dealing with insanity-inducing mosquitoes at some point in between, the stubborn but casual backpacker realistically has about a four-month window for high country backpacking in the Northern Rockies. Between work, family and social obligations, and other logistical hurdles it often makes for a “feeding frenzy” of trying to get out backpacking as much as possible for those of us lucky enough to live within weekend-trip-range of public lands in the Mountain West. Even with flexible schedules, limited obligations, and easy access to trailheads it seems impossible to spend enough time outdoors during the fleeting summer months. I’ve yet to meet anyone in Montana — from retirees to schoolteachers with summers off to office workers — who feel like they were able to spend as much time in the mountains as they truly desired. 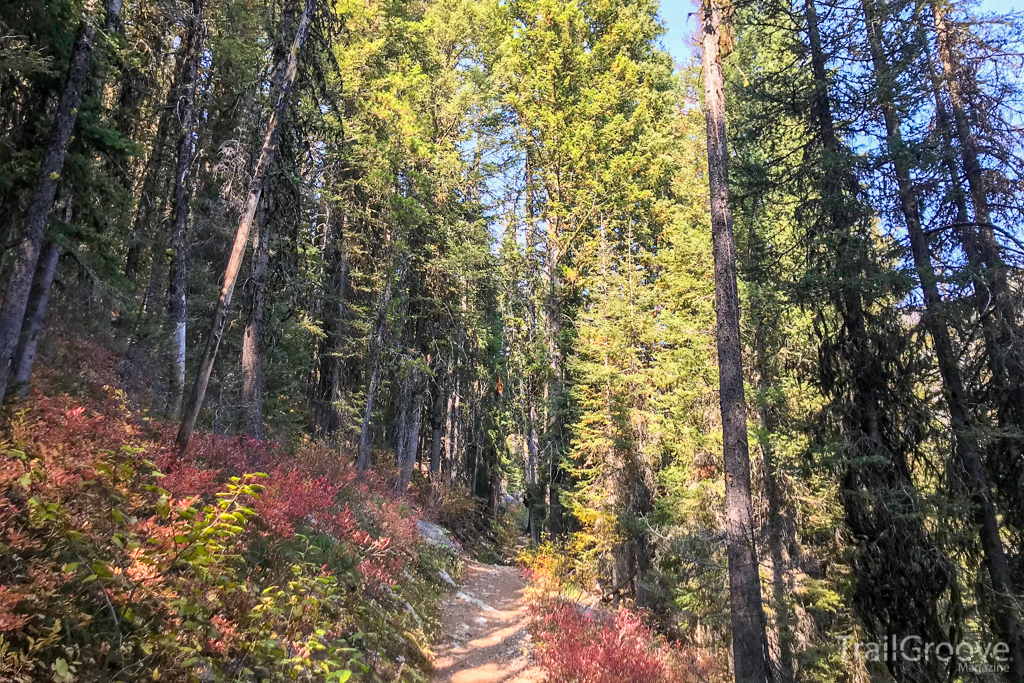 That near-guaranteed lack of fulfillment is why the last trip of the season is such a bittersweet one. The fall colors, crisp air, lack of bugs, and often fewer people is wonderful. Yet the shorter days and cooler temperatures are reminders that the last few grains of sand in the hourglass are about to drop. And it won’t be until mid-summer that the proverbial hourglass will be flipped again and the high-country backpacking season starts anew. In normal years, one can travel outside their region to extend the backpacking season or start it earlier – I’ve made trips to Arizona in November and March the past few years to do just that. But that’s less of an option this year, for obvious and unfortunate reasons, so the last high country trip of the year for me had a sense of finality and weight that was a bit unusual.

After two wonderful trips in early October to a larch-filled basin in the Bitterroot Mountains, a look at the forecast and my schedule revealed that the second weekend in October would almost certainly be the last one where I could hike to an alpine lake without hitting snow and enjoy the magic and reverie of camping in such a beautiful landscape. The short days had me wanting to maximize my time, so I chose a nearby trailhead and decided to hike to an alpine lake that I’d visited in August and, in addition to having its splendorous scenery all to myself, where I had caught several large trout on dry flies. 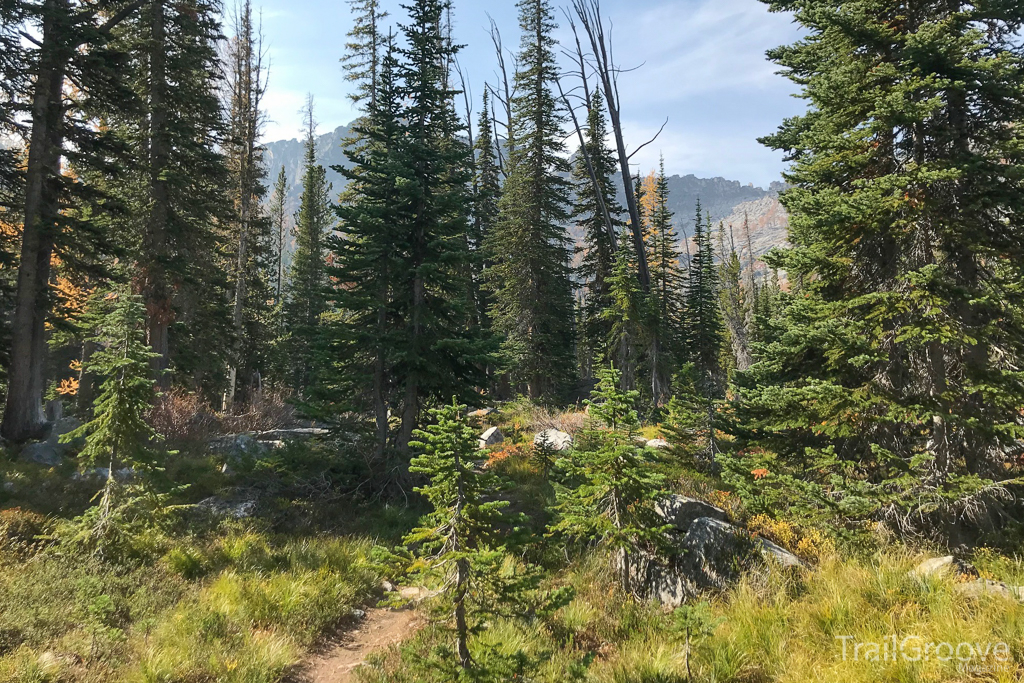 A mountain bike helped me make quick work of the first mile of “trail”, which was in actuality an old road bed. Once it narrowed to single-track I stashed the bike and continued on with my pack to the faint junction where an unmaintained trail led to the lake. As expected, and based on cross-referencing the number of cars in the parking lot with the number of hikers I saw on the main trail, I had the lake all to myself. Since the afternoon was increasingly breezy, I chose a more sheltered spot than I had on my previous midsummer visit. The larches around the lake glowed with an almost iridescent yellow and patches of snow on the shaded slopes beneath the crags above the lake provided a stunning white contrast to the autumnal ambience of the rest of the landscape.

I spent most of the afternoon soaking up the scenery and taking short jaunts to various points of interest around the lake to admire things from a slightly different perspective. The wind would occasionally gust with enough strength to tear the needles off the larch trees, which would then drift onto the lake and end up pushed against the shore. It was fascinating to see fall unfolding, albeit on a small scale, at that lake that afternoon and to think about it occurring all along the Bitterroots and other mountain ranges. 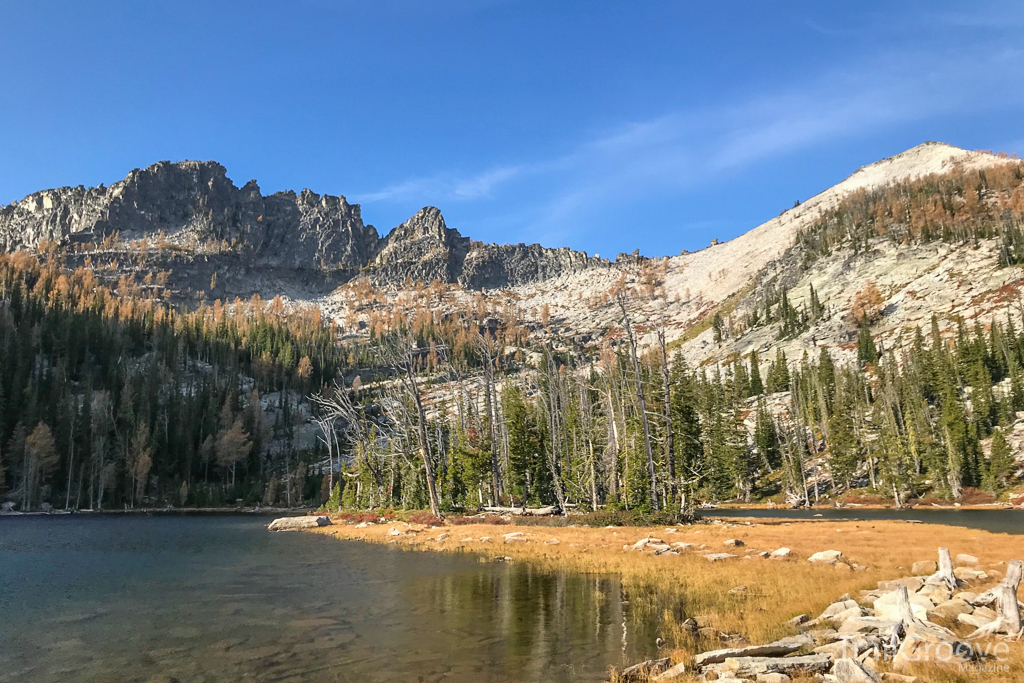 Knowing that the lake would likely be iced up within a week or two, I dedicated an hour to casting flies with my tenkara setup atop its surface to try to lure the selective, but sizable, trout that I knew lurked below its surface onto my line. There were almost no fish rising and a single strike was the only luck I had all evening. Numerous fly changes and technique alterations had no impact. I’d have to end my high country lake fishing season with a zero. Despite not catching anything, I did witness one of the most amazing – and taunting – jumps of a fish I’d ever seen while working my way around the lake. One of the larger trout I’ve seen jumped out of the water, almost like an alpine dolphin (in form, not size), then went on its way. Which, like all the other fish in the lake, was apparently far away from where I was casting.

After admitting defeat and putting on my down jacket to stave off the evening’s chill, I watched the stars come out as I ate dinner. Despite the celestial entertainment, as soon as I finished my post-pasta hot chocolate the warmth of my sleeping bag was calling to me. Between the cool temperatures and the steady wind, it was not an ideal combination for stargazing. The night was even more windy than the afternoon and despite being in a fairly sheltered campsite some of the gusts were strong enough to wake me up. Fortunately, the morning was much less breezy and I was able to sip a cup of coffee in peace while enjoying the morning rays of sun on the lake and the larches.

Although my trip didn’t necessarily end my high country backpacking season on a high note, it certainly gave me plenty of inspiration to return next year and beauty to look forward to. I suppose it isn’t really even the “end” of my high country backpacking, but rather just a seasonal intermission. And I’ve always found that when it comes to the mountains the intermission is worth the wait for when things resume.