The United States tends to protect its public lands in piecemeal fashion. Congress designates a single landform – a mountain range, coastline, or canyon – as a National Park or Wilderness area, but leaves the surrounding land open to settlement and industry. As a result, an ocean of development – towns, roads, mining claims, and logging operations – surrounds a few islands of protected space. Only a few ecosystems are protected in their entirety.

One such ecosystem is the Greater Yellowstone, which encompasses most of northwest Wyoming along with parts of Idaho and Montana. Yellowstone National Park naturally serves as the ecosystem’s centerpiece, and a dozen Wilderness or Wilderness Study Areas flank the park on all sides. Moreover, even the land that has no formal designation remains largely wild, owing mostly to the ruggedness of the terrain. 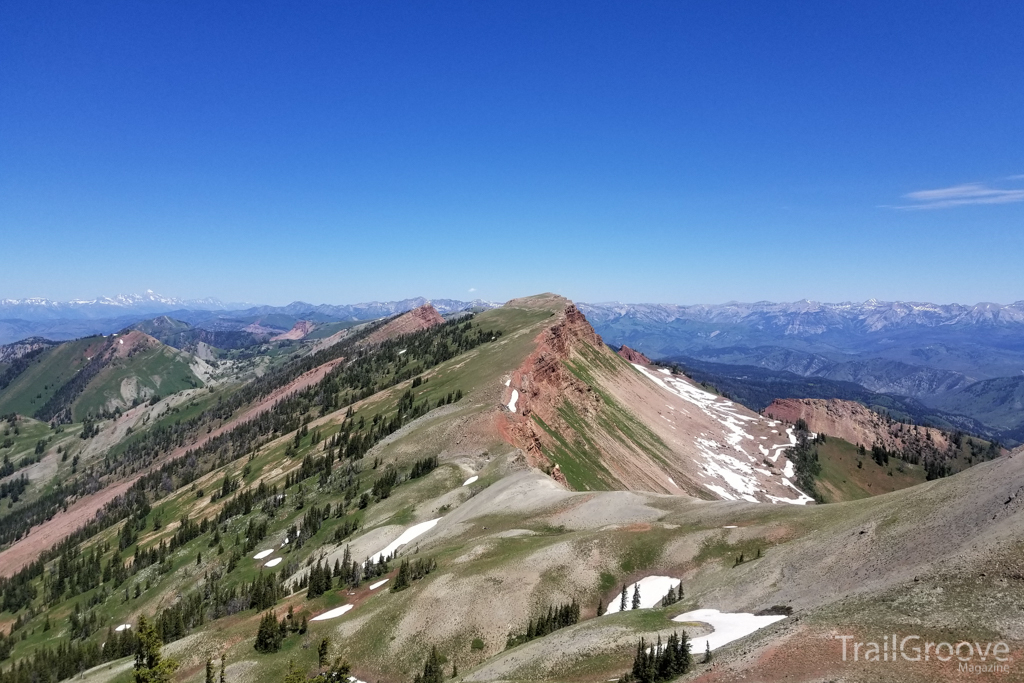 And what rugged terrain it is! While the park itself is not especially mountainous, it is ringed by a nearly-continuous series of outstanding mountain ranges. Some of them are well-known, like the Teton or Beartooth Ranges. Others are more obscure – the Wyomings or Gros Ventres come to mind. In 2020, I set out on a self-supported hike around the perimeter of the Greater Yellowstone Ecosystem. To avoid having to resupply in towns on account of the COVID-19 pandemic, I spent several days driving to various trailheads and placing bear-proof food drops – in compliance with forest regulations – along the route. I opted to hike in an 800-mile loop, beginning and ending the journey at my car to eliminate the need for public transit. I anticipated staying completely off the grid for the 2-month duration, walking in a circle.

The journey began on July 1st near the town of West Yellowstone, MT. I spent the first few days at lower elevations, battling swollen creeks and ruthless mosquitoes. I soon climbed into the Tetons though, walking right on the crest of the range for many miles. There’s something particularly magical about walking through an alpine landscape right as the snow is melting off. I felt as though I were somehow “getting away” with something – finding my way through snowy mountains that weren’t quite prepared for my presence yet. While I would glimpse the Grand Teton at least once daily for the majority of the loop, it would never be more up-close than it was along the Teton Crest Trail. 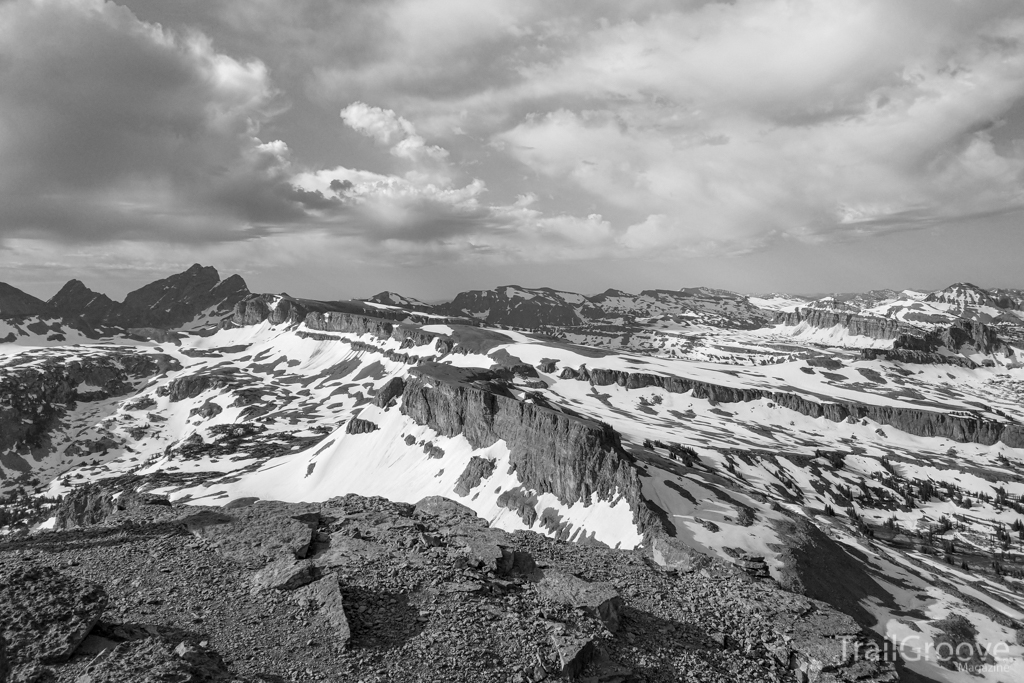 Leaving the Tetons behind, I ventured into a pair of more obscure mountain ranges – the Snake River and Wyoming Ranges. These ranges, while not quite as ostentatious as the Tetons, still contained plenty of magic – wildflowers in the height of midsummer bloom, ridgelines splashed with two-tone gray and orange coloration, and marvelous views of the Salt River, Teton, Gros Ventre, and Wind River Ranges. Despite a lack of official designation in the Wyoming Range, it felt like one of the most wild places of the hike. The magic continued in the beautiful but little-known Gros Ventre Range. The Gros Ventres were heavily glaciated in the upper elevations, creating “shelves” just below the main ridgeline that were a joy to cruise along. The lakes sparkled with a dazzling blue and wildflowers continued to show off their seasonal beauty. 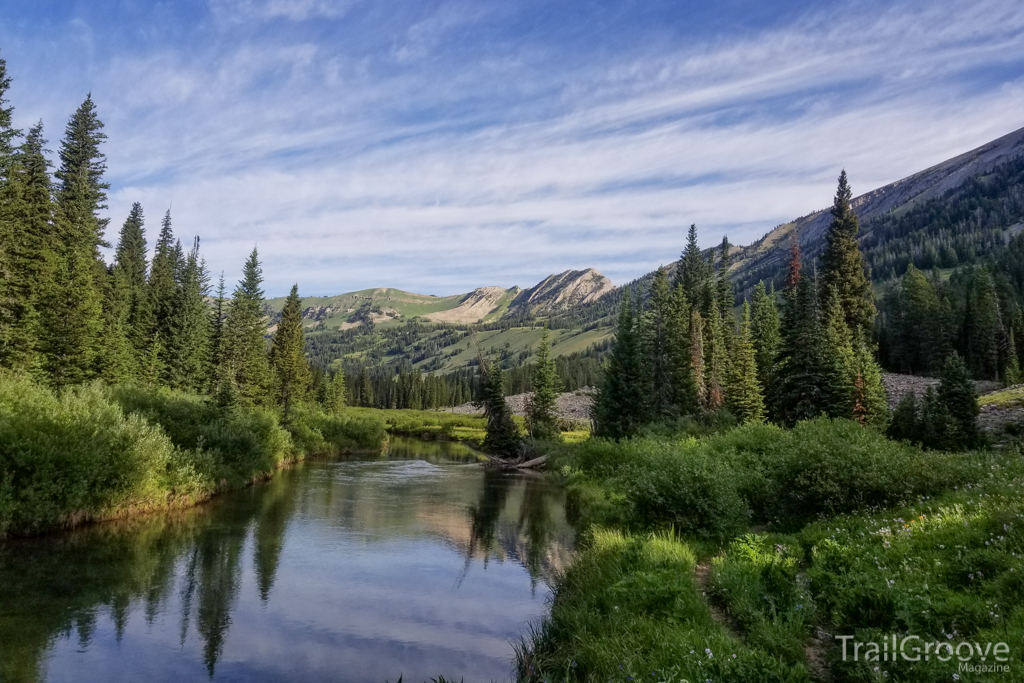 The route briefly joined Continental Divide Trail as it entered the vast, wild, and obscure Absaroka Range. The Absarokas are home to incredible above-treeline tablelands, crumbling volcanic cliffs, jagged peaks, and scores of grizzly bears. On July 21, while following an elk trail near the edge of some cliffs, I turned a corner and met one of those grizzlies, trapped between me and the precipice. Though I was carrying bear spray and had practice deploying it quickly, the attack came far too quick to use it. He made contact, spinning me around, and charged again. This second charge knocked me to the ground. Recognizing the attack as the defensive reaction of a cornered animal, I played dead, protecting my head and neck with one hand and grabbing my bear spray with the other. But almost as soon as I hit the ground, the bear bolted. Looking at my watch as I lay on the ground, I resolved to stay still for a full 10 minutes – the bear had fled, but I wasn’t sure how far.

Once my 10 minutes were up, I field-dressed my wounds (a series of deep gashes in my shoulder and chest), and mulled my options. The injuries weren't severe enough to warrant activating my personal locator beacon. However, I couldn't just continue 40 miles along my route to the next outpost of civilization – I needed urgent medical attention. In the end, I hiked out the shortest side trail I could find and caught a ride to the hospital. The hospital staff cleaned and stitched up my wounds – nearly 40 sutures in all – and sent me on my way. I spent a couple weeks off the trail, waiting for my injuries to heal up. I was very grateful to be alive. 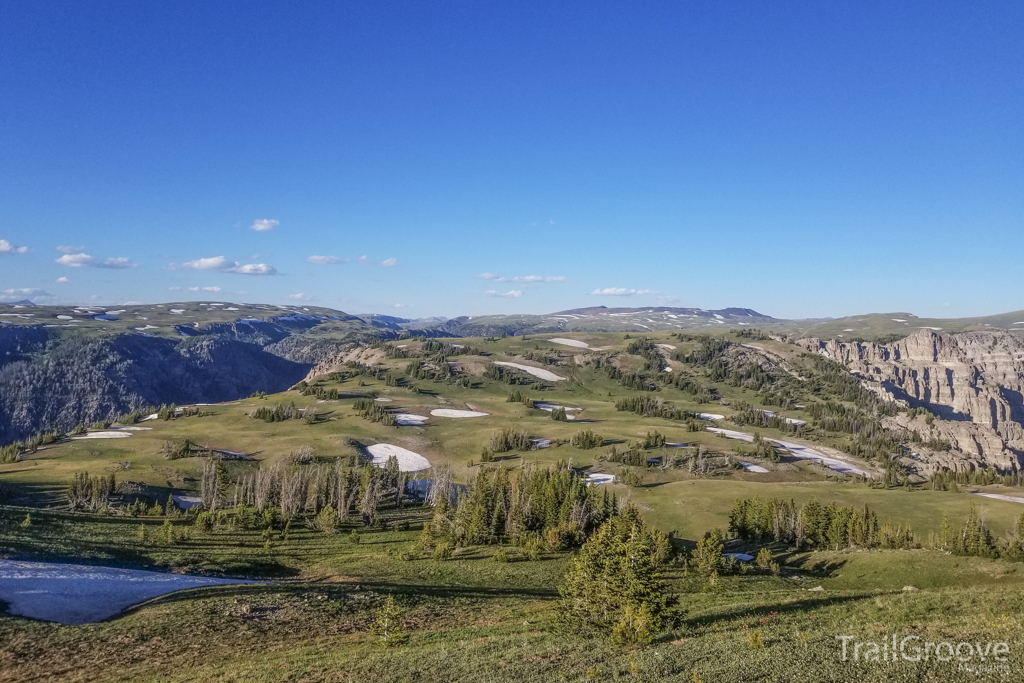 By early August, I felt well enough to continue the hike – with just enough time to complete it before winter arrived. The second half of the loop would be more relaxed than the first – I still couldn’t lift my arm above the shoulder, making scrambling impossible – and I stayed mostly on trails. Still, the Greater Yellowstone Loop didn’t disappoint. I made my way through the northern Absarokas, meandered down the seemingly-bottomless Clark Fork Canyon, and climbed into the Beartooth Mountains. The Beartooths were perhaps the most scenic range of the hike – and that’s saying a lot. Hundreds of lakes dotted the Beartooth Plateau. The area is a wanderer’s paradise – there aren’t many trails, but above treeline, they’re not needed. I walked past dozens of beautiful lakes, many of them unnamed. 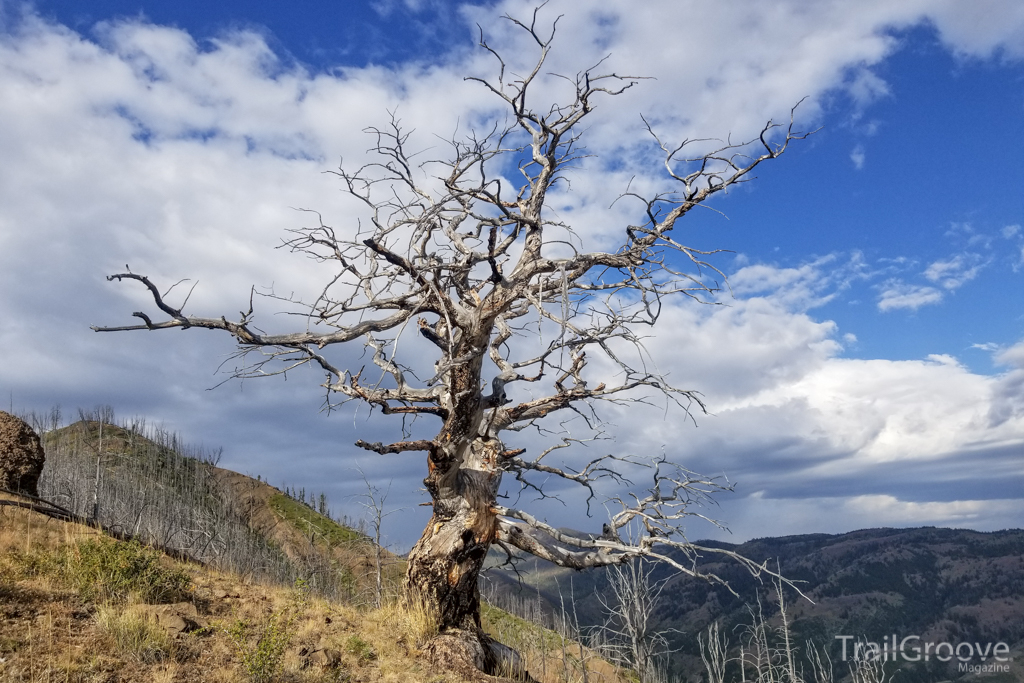 All too quickly, the Beartooths faded away, dropping me into the northern part of Yellowstone National Park. Thick smoke from a West Coast fire complex obscured the area, imparting an eerie orange tinge to the entire viewshed. It wasn’t all bad though – I followed a well-defined, NPS-grade trail for the first time in ages, enjoying a few days of easy travel. As I began the penultimate section of the hike, the Gallatin Range, I left the park, continuing on good trail along the crest of the range. The Gallatins were probably the most “fun” section of the hike – a combination of pleasant walking and pleasant temperatures made for glorious days despite the smoky views. 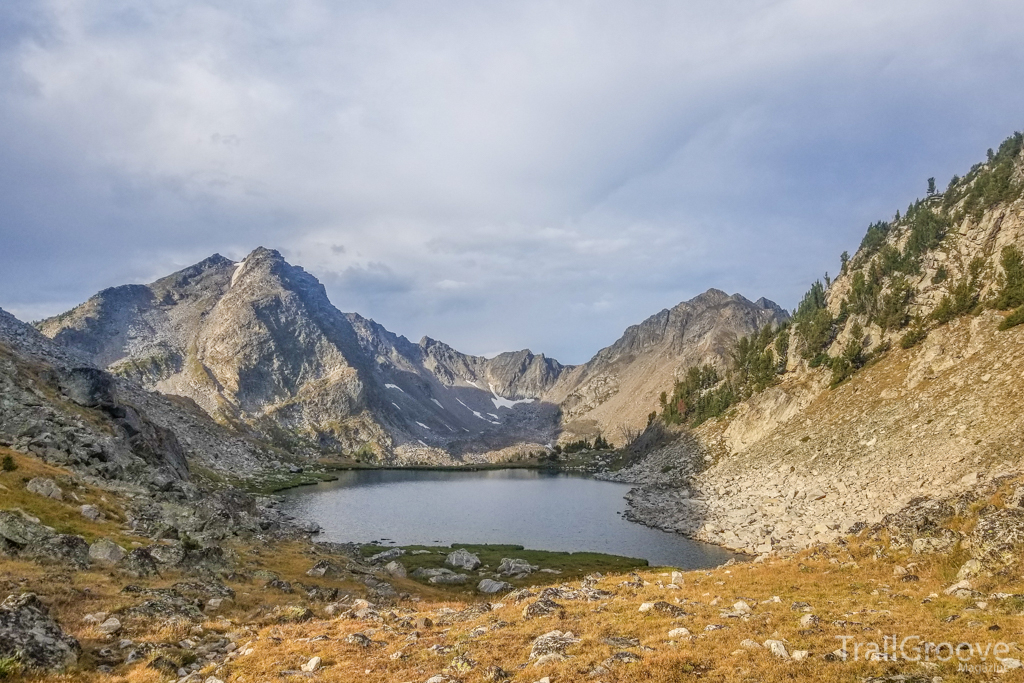 For the past few weeks, I had been racing the changing seasons, and that became very apparent in the final range, the jagged Madisons. The fairly stable weather of the past two months began to break down, with a fresh batch of thunderstorms arriving each day. Due to the exposed nature of my planned route through the area, I was forced onto a couple of lower, safer alternatives. On one occasion, while following a trail through a forested basin, I glanced up at Lone Mountain – where my intended route would have led – just in time to see two lightning bolts crash down onto it. I was glad to be down here, rather than up there. As I walked into West Yellowstone on the last day of August, completing the loop, the first snow of the season began to fall in large flakes.

I spent two months walking in a circle. And yet, in going nowhere, I saw so much. The underlying unity of the entire ecosystem was apparent. Nearly every day, I caught a glimpse of either the Grand Teton or Electric Peak, two prominent area landmarks. The jaggedness of the Tetons, the wildness of the Absarokas, and the splendor of the Beartooths weren’t just points of beauty in a sea of unknown; rather, they were connected by footsteps. I suppose that time spent walking in circles is time well-spent.

Information: The Greater Yellowstone Ecosystem is a vast tract of mostly-protected land, with Yellowstone National Park at its center. Many of its mountain ranges rank among the true classics of North American backpacking. Backpackers new to the area may be drawn to the Teton Crest Trail, Yellowstone’s Lamar Valley, or trips in the Wind River Range. Backcountry Permits are required in Yellowstone and Grand Teton National Parks

At least two people walked a Greater Yellowstone Loop prior to 2020. Phillip Knight, a Bozeman local, wrote a book about his 600-mile loop circa 1990. In 2018, my friend Pepperflake hiked a 1,000-mile route, which I used as a starting point for my own 800-mile variant.

Best Time to Go: The backpacking window in the Greater Yellowstone is rather limited – high alpine terrain generally doesn’t melt out until July, and snow often begins falling again by mid-September. July and August are prime months.

About the Author: Kevin “LarryBoy” DeVries is an avid hiker based in Salt Lake City who enjoys everything from weekend trips to thru-hikes on America’s long trails. Most recently Kevin has hiked the Florida Trail, the Route in Between, and in the summer of 2020, Kevin hiked 800 miles on the Greater Yellowstone Loop as detailed in this article, a route encircling Yellowstone National Park and traveling through the Greater Yellowstone Ecosystem through Wyoming and Montana. Kevin has also hiked from Mexico to Canada on the Route in Between.