I was muddied, bloodied, and soaked, but I had reached my goal. I was standing on the rim of Wailau Valley. Just beyond my toes, the land dropped away steeply to the valley floor 3,000 feet below. Waterfalls streamed down the cliffs that surrounded this lost world as it swept away before me to the north shore of Moloka’i. It was hard to believe that 50 years ago I had descended this cliff and then hacked my way through five miles of jungle to the ocean. I must have been crazy. I was definitely lucky. 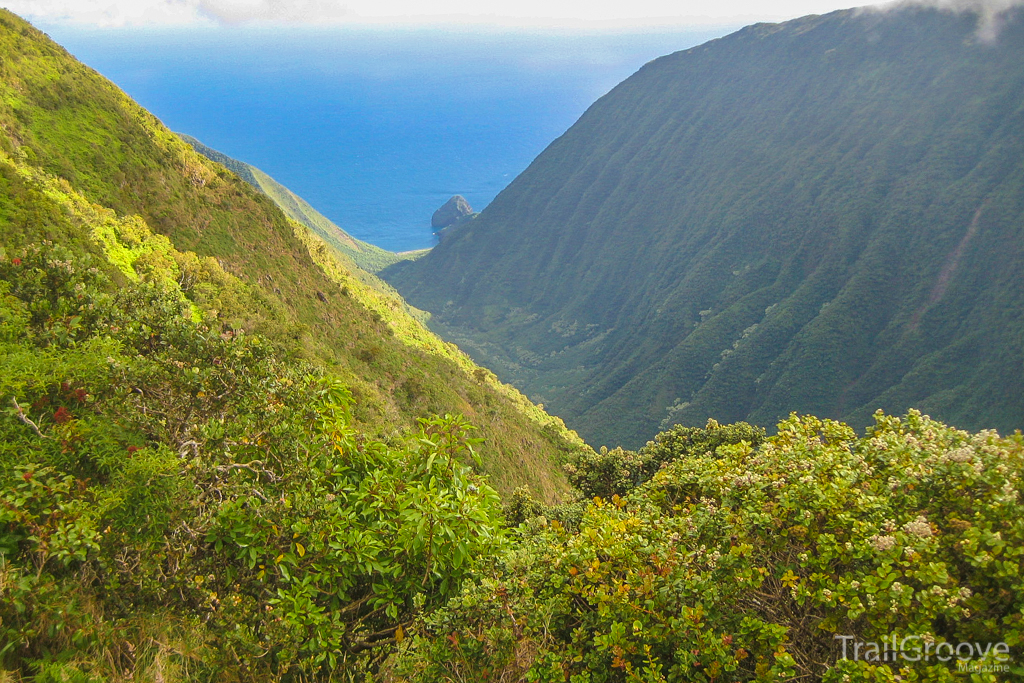 That trip across Moloka’i long ago was the most difficult backpacking trip I have ever been on. It was also the most foolhardy, dangerous, and life threatening. In 1969 we had made our way from the south shore of the island to the north shore, hung out on the beach for a few days, then hiked back to our starting point. The day hike I took to the edge of the valley in 2019 was an attempt to relive the easier part of that ill-conceived youthful adventure.

I learned online that there was now a trail. It would be difficult to follow, but the trailhead was easy to find, as it was beside a large heiau (ancient Hawaiian temple). As I drove to where I thought I would find the trailhead, I passed what could have been the heiau. I drove on to a little country store and restaurant, called Manae Goods & Grindz to double check. I was the only tourist in sight. I asked a young Hawaiian woman clerking in the store where I could find the heiau, but she was reluctant to tell me. I got it – she didn’t want some Californian mucking around in a place she considered sacred. I explained that I needed to use the heiau as a landmark and promised I would not touch it. She was convinced and opened up.

In 1969 we didn’t even know there was a trail. We just took off blindly up the mountain. There were five of us in that group, all University of Hawaii students. The trip was Jan’s idea. He had been born and raised on Molokai, where his father was a well-paid agronomist for the pineapple company. Jan invited his friends Chris and our mutual friend, Fred. Fred invited me, and I invited Lou, a fellow chemistry graduate student. I knew just a little about backpacking, and the others knew next to nothing.

The route left the heiau as a dirt road and soon became a narrow, rocky trail overhung with thorn bushes. Eventually, I came out into a patch of meadow with sweeping views across the ocean to the islands of Maui, Lana’i, and Kaho’olawe. After the grassland, the trail entered the rainforest, where the trade winds dump 300 inches of rain each year. Rain fell intermittently as I worked my way uphill. Even though the slope was moderately steep, this was a swamp because the water could not run off fast enough. Everything was growing on top of everything. New life flourished from dead logs. Tree ferns, vines, twisted trees, mud, rain, and darkness. I lost the trail several times. Panic sets in quickly when one struggles to move in what may be the wrong direction. 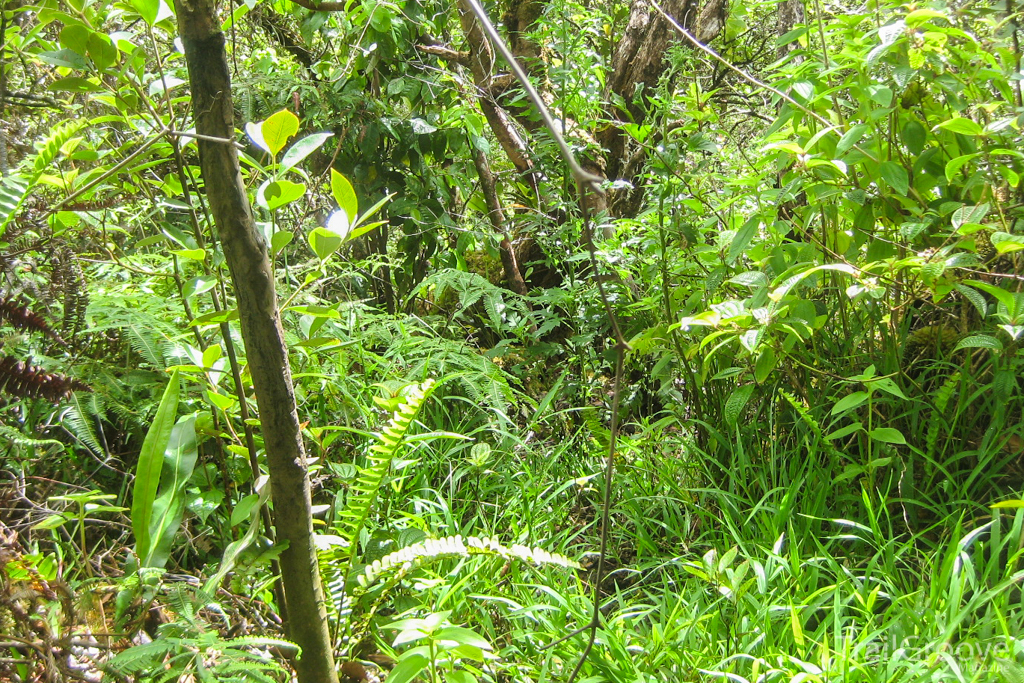 The same thing had happened when I was here with my four friends, except that, then, we were always lost in this jungle. We had just followed our compasses and headed north. We got to the rim of the valley at dark and picked our way along the cliff edge until we found a spot flat enough to set up camp. In the rain. In 2019 I found the trail again just before I reached the edge of the valley. From there, the trail plunged down and out of sight. I have heard that slides have wiped out parts of the trail down the cliff.

Fifty years ago we had just shrugged and plunged off the edge. We tried following ridges to the bottom using a rope I had somehow thought to bring along. Each ridge looked promising until it ended in a vertical drop-off. We would then fight our way back up and across a ravine to the next ridge. By late afternoon, the smell of panic and surrender hung in the damp air. The clouds parted briefly, and I climbed a tree to get a better view. I could see a ridge that looked like it went to the valley floor and told the crew we had to get to that ridge. Before we got there, darkness fell and the rain increased. We found a gently sloping spot created by the root ball of a fallen tree and spent the night there in the mud under a plastic tarp that was my excuse for a tent. On the more recent trip, I stood on the cliff edge in the rain, lost in thought, as I waited for the clouds to clear. I got enough glimpses of the valley to satisfy my nostalgic longings and turned to retreat back through the jungle. 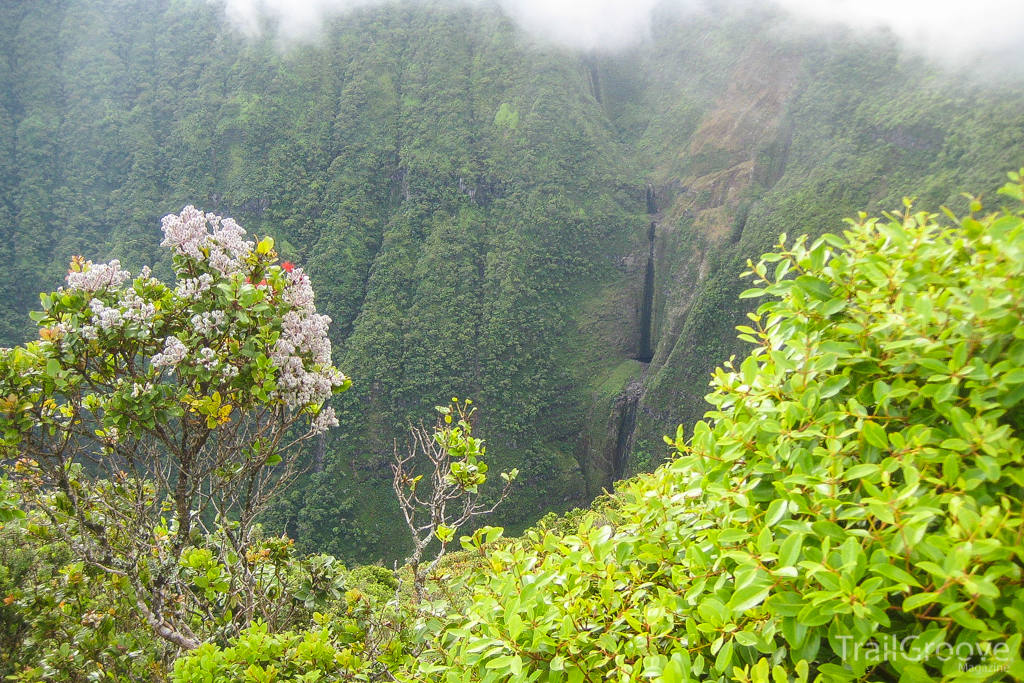 The next day we made it to the promising ridge. The angle of descent was encouraging, but there was a new problem – false staghorn fern. Our way was obstructed by matted, tangled, thickets of this vining plant, rising to heights of 20 feet. We took turns tunneling through the ferns and finally arrived at the headwaters of the Wailau River in early afternoon. On the return hike in 2019, I got terribly lost again in the rain forest/swamp. I was off the trail and down in a depression surrounded by thickets of ferns and vines. I took an educated guess and started fighting my way uphill. I spent 15 minutes climbing 15 feet. My panic was reminiscent of the 1969 trip. What if I were on the wrong ridge? Could I spend the night here in the rain? Ah, but there it was, the faintest hint of the trail. The remainder of the trip down to the heiau was uneventful.

On the third day of the 1969 expedition, we followed the river across the valley floor and spent the third night sleeping on a sandbar. This leg of the trip was easier, but not without problems. Several times we had to lower our packs over waterfalls, and then wade across chest deep pools carrying them on our heads. We arrived at the beach at the mouth of the river early the next day. What can I say – life on the beach was idyllic. It may have even been worth risking our lives to get there. We were completely isolated by sea cliffs on two sides, the jungle behind us, and the sea sweeping away to the horizon. The trip back out took three days and two nights. The second night thick fog set in, and we got lost in the rainforest on top of the island again. Again, we spent a night in the mud under the tarp. The next day the fog lifted, and we got our bearings and returned to the south shore without further adventures. 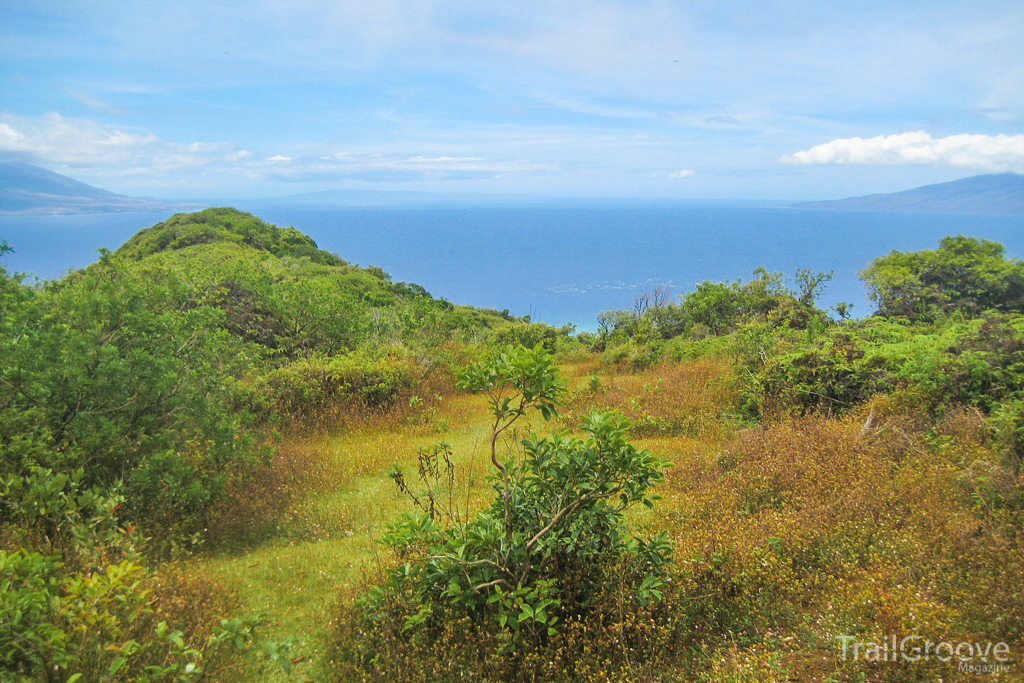 A few other parties have hiked into Wailau Valley. They all had better gear than us and were more experienced. I believe they all got picked up from the beach by a prearranged boat instead of hiking back out, as we did. I think the five of us from the long ago trip all fantasized about returning to Wailau Valley with more planning and better gear. As we aged, the fantasy faded, and my 2019 hike put the urge to rest. What did I learn from these two outings? If you are going to get lost, it is more fun to get lost in a jungle.

Information: The first half of the trail is easy to follow, but rocky and thorny. About half way up you come out into a meadow of grass and ferns. The trail, which bears right, is easy to lose here. After you enter the rainforest, the trail becomes faint and even harder to follow. Pay attention for the trip back. When you come to the rim of Wailau Valley, stop! The route from that point is difficult to impossible. As with most activities on Moloka’I, no permits are needed. Just stay on the trail and avoid private property.

Getting There: The trailhead is just west of the country store, called Manae Goods & Grindz at 8615 Kamehameha V Hwy. The trail starts near a large heiau (Hawaiian temple). The heiau looks like a rectangular rock wall. A dirt road parallels the west wall, along which there is room to park. Walk to the end of the wall and follow the road uphill to where it becomes a trail. Please respect the heiau, it is sacred in the local Hawaiian culture.

Books: General Information on Moloka’i can be found in the Insider’s Guide to Moloka’i.