Whitecaps swirled in the ochre mixture of water and clay in the flooded wash at our feet. I never knew water so muddy could have whitecaps and now our route lay on the opposite bank of the torrent as it raged over unseen boulders and cut into the edge of its banks. 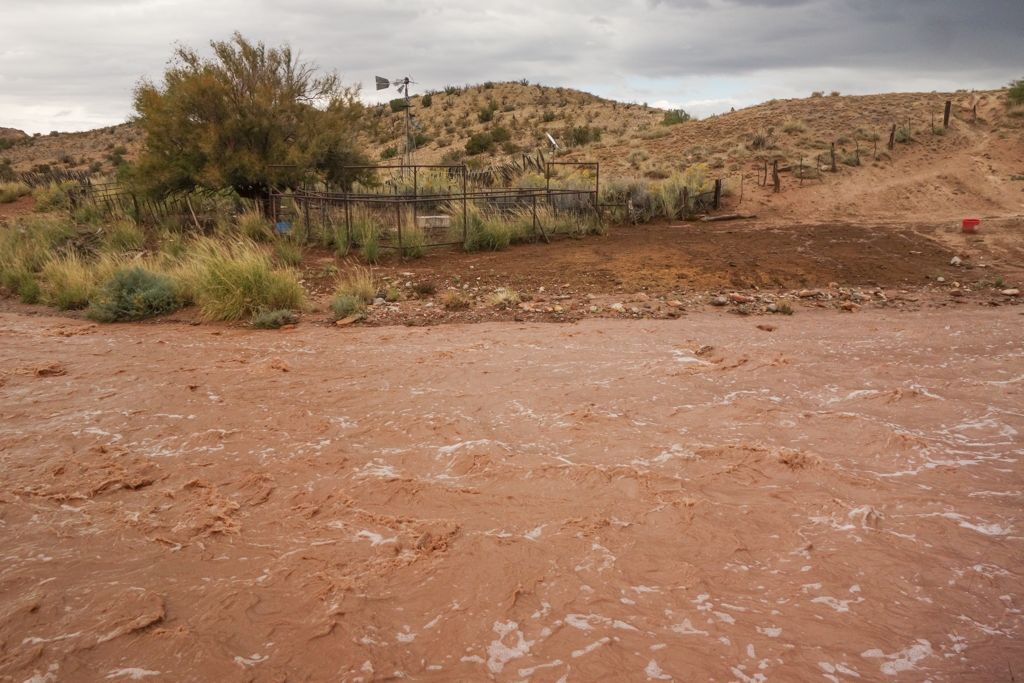 Standing there at the two-track crossing in the middle of nowhere New Mexico, I wondered how many “do not enter when flooded” signs we passed on paved roads in the Southwest. It was late October and the third day in a row of intense thunderstorms that had slapped us around the open desert a hundred or so miles into the Grand Enchantment Trail (GET).

The GET, a fantastic route from Albuquerque to Phoenix by Brett “Blisterfree” Tucker, connects islands of rarely visited high mountain wilderness with either the most scenic, shortest or most interesting path sometimes zig-zagging cross country around checkerboards of private property or simply to shorten the route. Often the route takes you off trail up and down normally dry washes, dry riverbeds of gravel and exposed bedrock wiped clean during the summer monsoon season. The washes are the quickest off-trail method of travel in much of the arroyo riddled and spiny Southwest, providing a practical highway in comparison to other options. Today those dry washes were churning out mud as fast as the arroyos could drain.
My girlfriend Rachel and I were wrapping up an 8 month backpacking trip including a thru-hike of the Arizona Trail the previous spring, traversing the width of Zion National Park and completing over 2,200 discontinuous miles of the Continental Divide Trail in what I called an “open ended section hike”. We came to the GET to try something new, and a little tired of the CDT’s relentless pursuit of the imaginary line separating the Atlantic and Pacific watersheds. 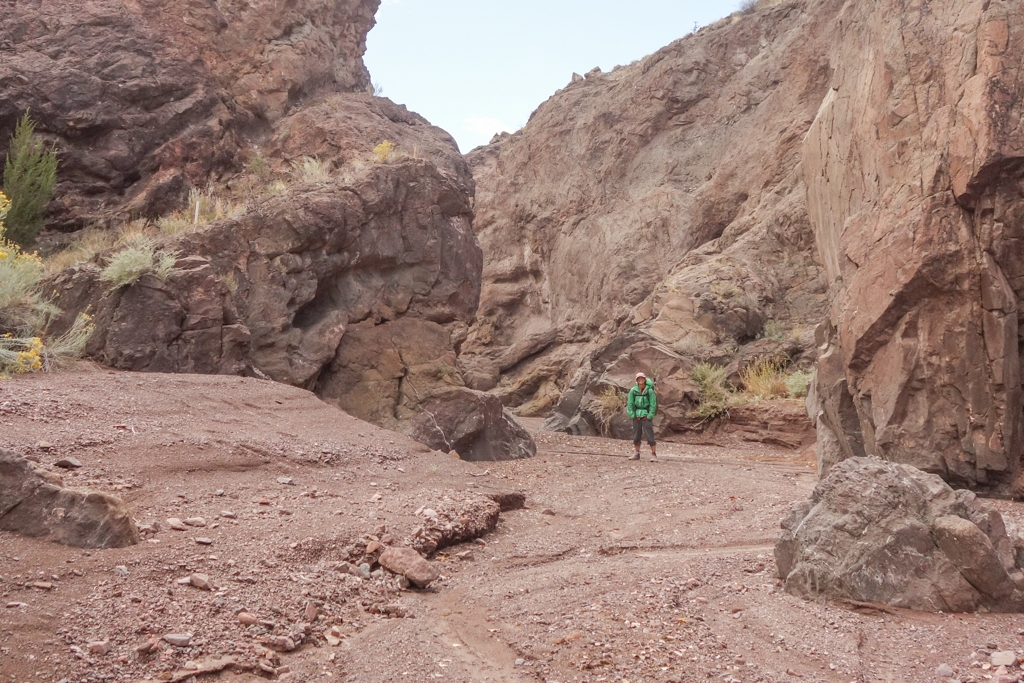 I paced nervously up the banks, looking for an alternative crossing in vain; we were already at the widest and therefore likely shallowest point. I had already attempted to ford, my shoes were instantly filled with gravel pushed past my tiny gaiters. The heavy mixture frothed over my knees before I could get more than a quarter of the way across, so I turned back figuring it wasn’t safe. Rachel and I decided to sit and wait by the cow troughs nearby, watching for water to recede. A rock pile we placed at the water’s edge an hour ago showed several inches of downward progress but a new storm cell was approaching.

“We better just go for it, we can’t wait all day and it’ll probably get worse with that storm coming” I told Rachel.

We stepped out into the water together, face to face and hands gripped on each other’s arms for balance and hip belts unclipped. I crossed upstream of her, hoping my legs could break some of the waters force for her five foot nil ninety pound frame and that neither of us would lose our invisible footing.  Even after 800 miles of the Arizona trail the previous spring and over 2,200 miles of the Continental Divide Trail that summer this was the first water crossing I felt scared of. We had plenty of experience with fording rivers, but usually we could see what we were stepping on and how deep the water got. Our biggest ford to date was the Green River just north of the Wind River Range to reconnect back to the CDT from a little used alternate that was almost up to my waist, practically Rachel’s belly button but uneventful aside from a curious otter. 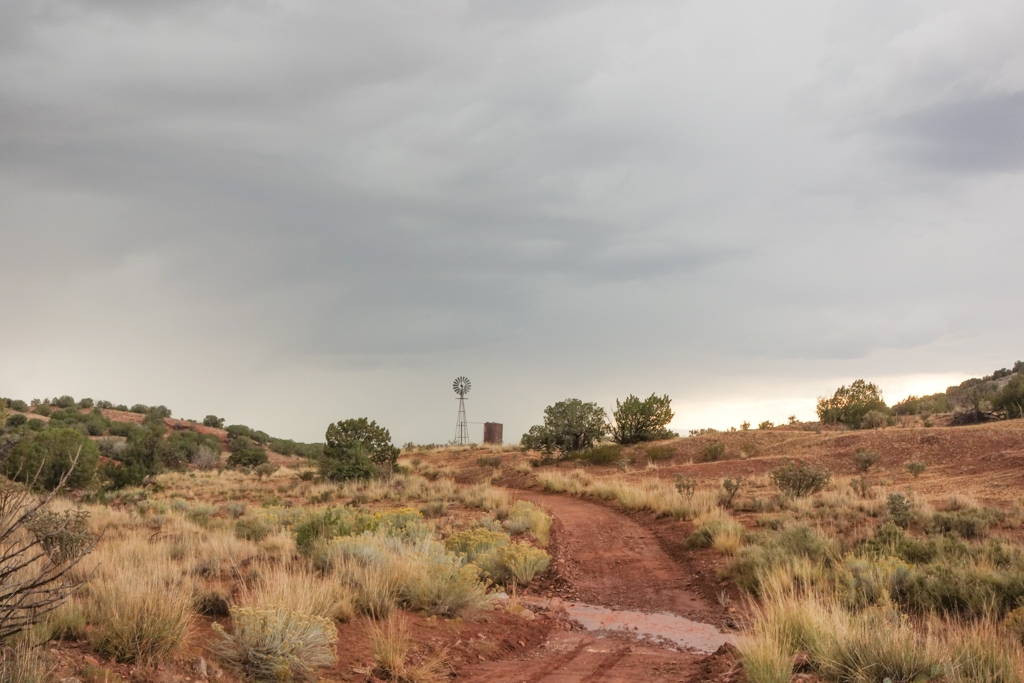 We took tiny steps sideways into the torrent, careful to offset our leg movements to avoid losing balance. Crab walking sideways lets the strongest muscles in your legs fight the current instead of using the weakest by walking straight across, and we needed every ounce of strength as the water continued to deepen.  Unable to see the churning bottom, we felt with our feet to find good footing before committing our weight to the next step. It would be easy for me to claim that I simply held Rachel from falling and crossed without issue, but in reality we kept each other from going under as I steadied myself against her as often as she did against me.

The water peaked on my thighs and about level with Rachel’s waist, but our gear stayed dry and we made it to the opposite bank. Our maps called for us to leave the two-track in another few miles and continue down into another wash and follow it for two more miles. Instead of walking into a flood, we followed a faint two-track Brett had called out on the map but decided not to use since it disappeared too often. When we finally lost the track for the last time, we set a bearing on our compasses and headed cross country to the old windmill at our next water source.
The rest of the section into Magdelena went relatively smoothly. In a normal year the typical GET hiker heads cross country again down several canyons and on to a normally shallow but wide ford of the Rio Grande. Instead, we took the alternate to road walk an additional eight miles around to a bridge and back up to the main route. Crossing the Rio by bridge we could see it was at bank full, when the flow comes close to the top of the rivers banks. Checking the nearby stream gauge data later on I learned its flow had increased from about 30 cubic feet per second the previous week to nearly 1,000 when we crossed the bridge. 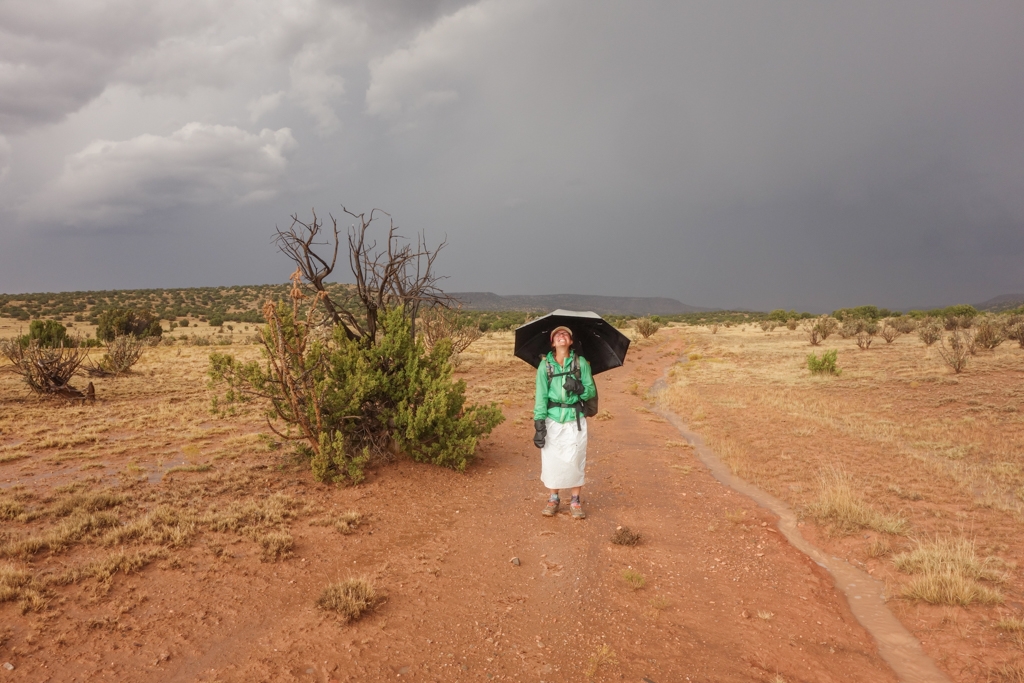 The skies that day and the next churned out more rainbows after each storm than we could have imagined. When noticed boot prints for the first time on the trail when Brett’s route took us up San Lorenzo Arroyo – a narrowing canyon with some low pour-offs to scramble up. After the arroyo, the landscape was covered in scattered bunch grasses with the odd cholla (pronounced choy-ya) cactus for miles around. The storms broke over isolated mountain ranges in the distance as we walked past the remains of old ranch houses and ancient “aermotor” windmills. Our final day into Magdelana we found the source of the prints, three German hikers out doing a section of this obscure route. One had a slight limp from a recurring ankle injury that popped up on the trip.
“Your pack is so small! Where do you fit your supplies?” asked one of Germans, sporting big packs and big boots. 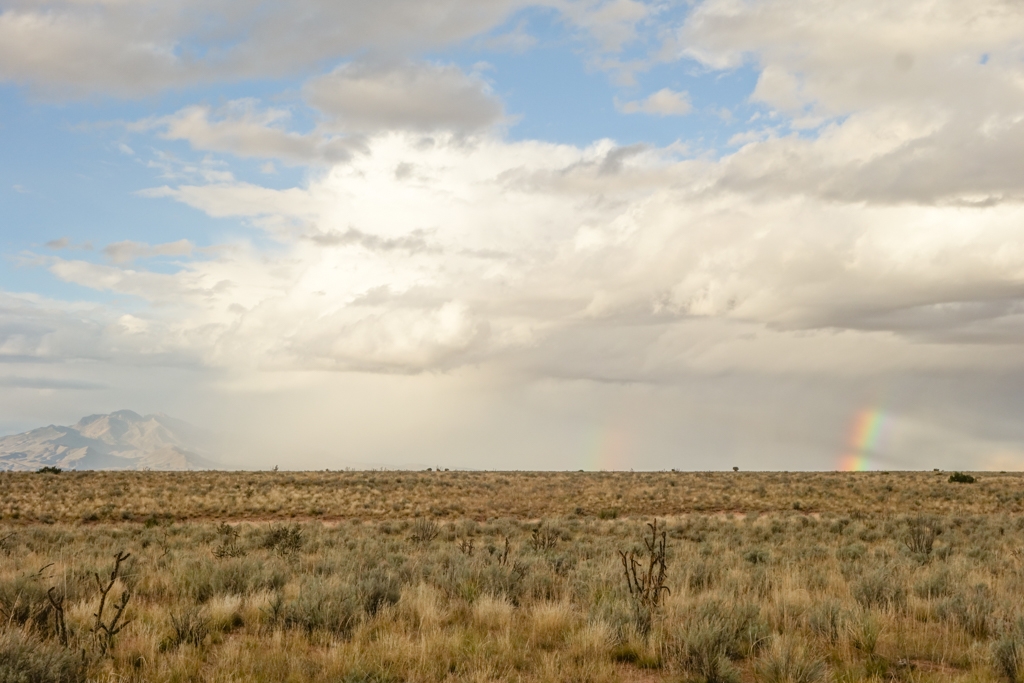 “I just eat a lot right before I leave town and hope I don’t get hungry later.” Apparently lightweight backpacking has yet to take Europe by storm.

The five of us enjoyed our time in Magdelena, at the sole restaurant open in late October but had to part ways because of the injured ankle. A woman in town offered to drive them to Doc Campbell’s post, two hundred miles further along the trail so they could do some day hikes in flatter terrain there instead of carrying their full packs over the mountains. Such generosity seemed incredible to the Germans and I felt a little pride in America, having been both the recipient and giver of so much kindness in this country.
Rachel and I pushed on, eager to see what Brett had in mind for us on the rest of the Grand Enchantment Trail. 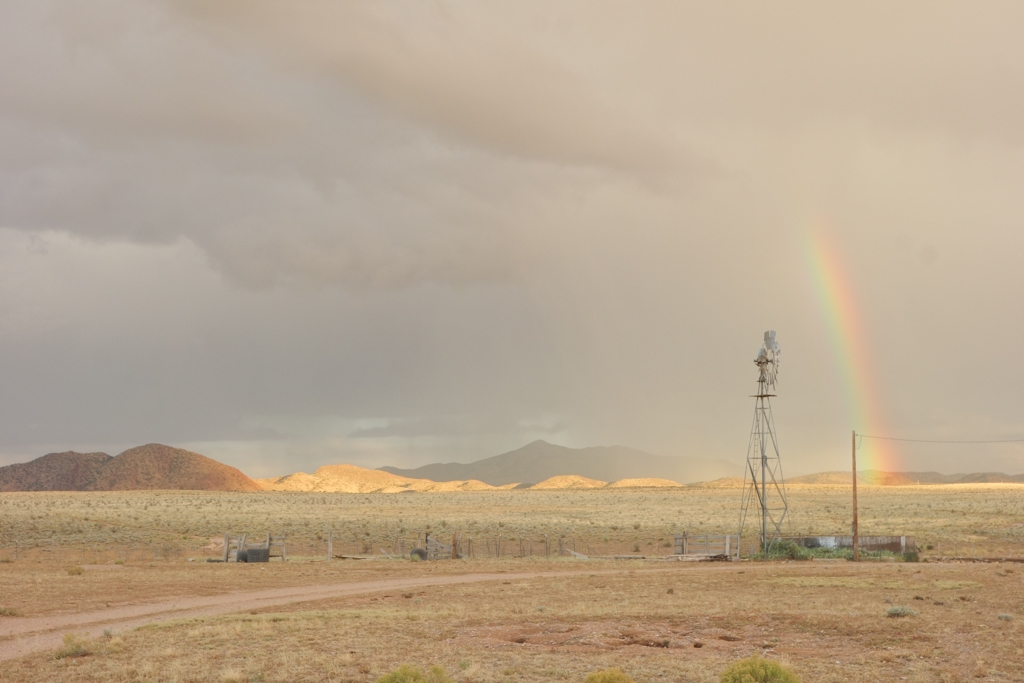 Information: The Grand Enchantment trail is an informal and unmarked route created by Brett "Blisterfree" Tucker, more information can be found here. Map PDFs are available for purchase through the website.

Getting there: The Grand Enchantment Trail crosses US 60 through Magdelena, New Mexico. From town, follow the route north towards the town of Mountainair, New Mexico. There are no trailheads on this portion of the GET but long term parking might be available at the Magdelena Ranger Station at 203 First St; Magdalena, NM 87825.

Best Time to Go: April through June or September through October tend to have the least heat and avoid summer monsoon season. Significant snow in this part of the GET is unlikely.

The Author: "Mike "Hiker Box Special" Henrick and Rachel "Heartbreaker" Brown spent 8 months of 2015 backpacking over 3,600 miles across the American West on the Arizona, Continental Divide and Grand Enchantment Trails after meeting just two months prior. Mike thru-hiked the Pacific Crest Trail in 2013 and has been bike touring, backpacking and traveling since 2008. Look for more stories from Mike and Rachel's hikes in future issues and on the TrailGroove Blog.