A tiny “red dog” – a fuzzy, reddish bison calf – was all but glued to its mother’s side as she fought off a half dozen wolves near Yellowstone’s Slough Creek. The mother had strayed from the herd, and wolves were attacking from all sides in an attempt to separate her from her baby. The stiff-legged little calf wheeled and turned with its mother as best it could, but the outcome seemed inevitable. 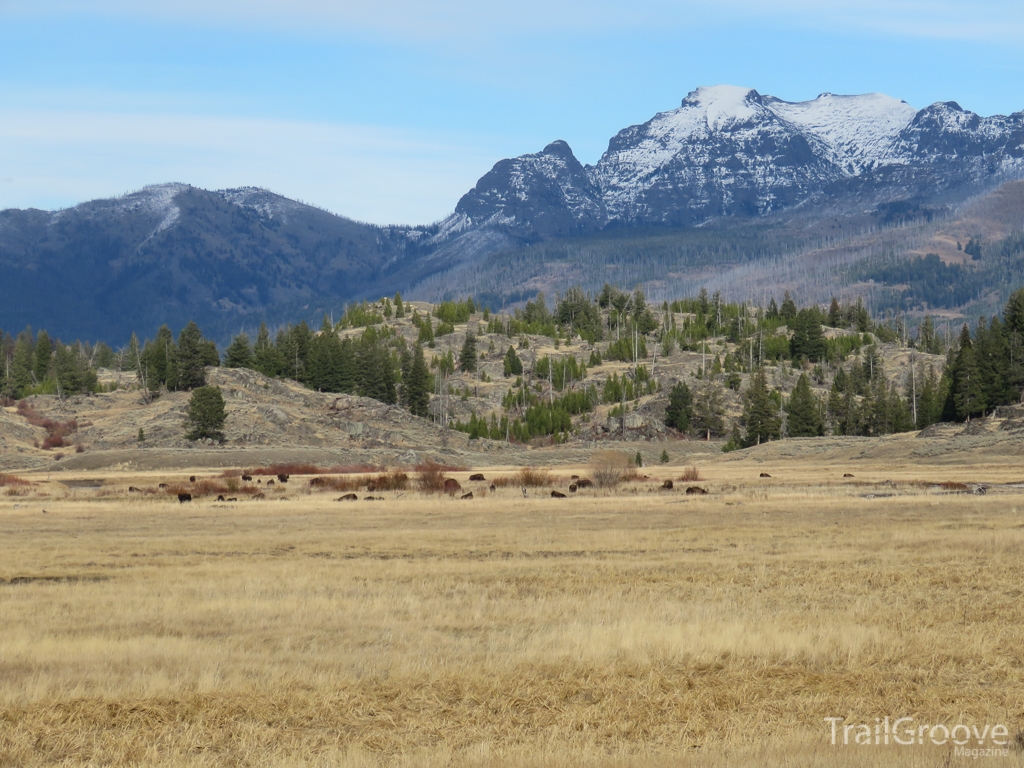 The standoff was visible to the naked eye, about two hundred yards off Route 212 on the park’s northern perimeter – an area sometimes called “North America’s Serengeti.” Two or three wolf-watchers had set up spotting telescopes at the turn-off to Slough Creek, and they invited my husband, John, and me to take a look. The scene was even more dramatic through a telescope. The calf would surely be killed and consumed, and probably soon by the look of things.

It turned out that the story’s outcome was anything but simple. And, in the end, the fate of the young bison was just one piece of a web of complex wildlife relationships that we encountered that day.

John and I are seasonal volunteers in Yellowstone, and we had decided to spend an October morning hiking a roughly five mile loop starting and ending at Slough Creek Campground. The small campground is located two miles down an unpaved road from Route 212, 25.8 miles east of Mammoth Hot Springs.

The wolves that surrounded the bison mother and baby belonged to the Junction Buttes, a pack that formed in the past few years and now claims this area as part of its territory. Wolves follow their prey; in Yellowstone, this most often means elk, but there can also be other targets such as bison calves, or even adult bison for certain packs. 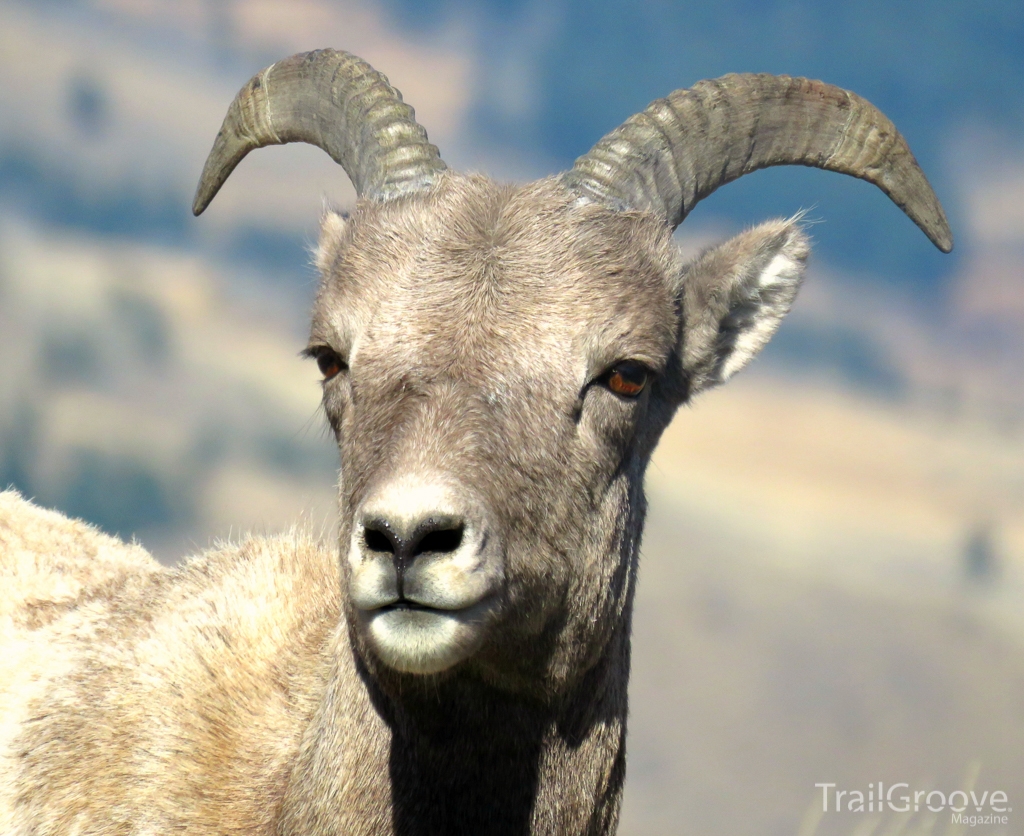 Young wolves practice the skills they will need to successfully hunt. I recently watched four Junction Butte pups on a hill above Slough Creek, playing with elk antlers by tossing them in the air, tugging, and fighting over them. It was play all right, but it served as important skill-building and social bonding for these up-and-coming apex predators.

In addition to wolves and bison, the Slough Creek area is known for grizzly bears. Hikers in Yellowstone should check in advance for any recent warnings about grizzly activity or trail closures. It’s important to never hike alone, make a lot of noise, and have bear spray readily available and know how to use it.

Arriving at the Slough Creek Campground, John and I walked to the second creek-side campsite, and began the loop hike by sloshing across the creek – which varies seasonally from ankle to shin deep. Picking up easy-to-spot Buffalo Fork Trail on the far side of the crossing, we passed through a classic alpine meadow, then ascended several hundred feet on the rocky, narrow path. 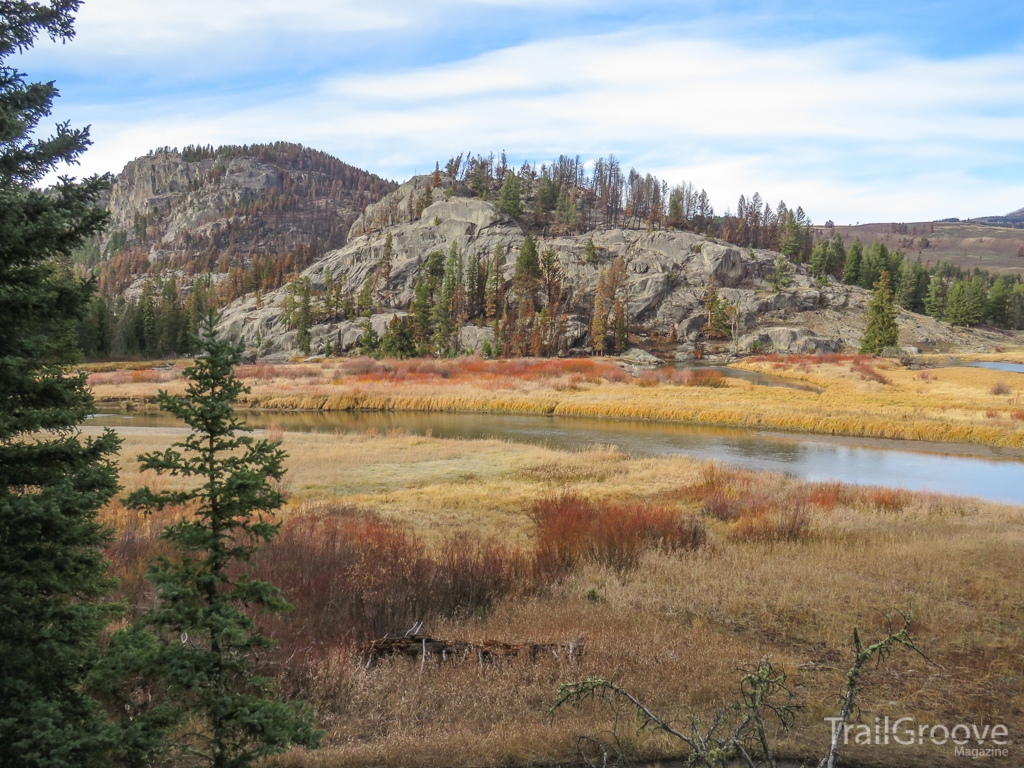 We were both hyper-alert due to the possibility of grizzlies, particularly because it was autumn and Yellowstone’s bears are ravenously hungry as they pack on weight for hibernation.

Biologists believe that the park’s grizzlies have learned to follow wolves and attempt, often successfully, to feed at their kills. A bear at a carcass is frequently not the animal that made the kill, but rather an opportunistic scavenger. On the day that I watched the four Junction Butte pups at play, I was told that I had just missed a large grizzly that appeared about a hundred yards from the wolf pack. Perhaps the bear was following the pack, or was at least keeping track of its location.

As John and I hiked, we spotted bison, and here and there, mature, solo males that spend much of the year away from the herd. A nineteenth century writer called these cantankerous bulls “outlaws,” and gave some safety advice that’s still accurate today. Bison have difficulty seeing straight ahead, so stand to the side to make sure that the animal sees you. Keep your distance (the park requires a minimum of 25 yards), and be prepared to make detours. And remember, a raised, rigid tail signals that its owner is agitated.

At 1.7 miles from the campground, an open view to the right (east) encompasses an expanse of grassy hillside descending to a very large meadow marked by a distinctive rock “island” and Slough Creek’s meandering channels. On the far side of the meadow is a patrol cabin and the clearly visible Slough Creek Trail, which is an old wagon road. Braided routes lead down to the meadow and trail, but ankle to knee-deep or higher creek crossings are required depending on the season. Be sure to stay on an established boot or game trail to avoid doing damage to the habitat. 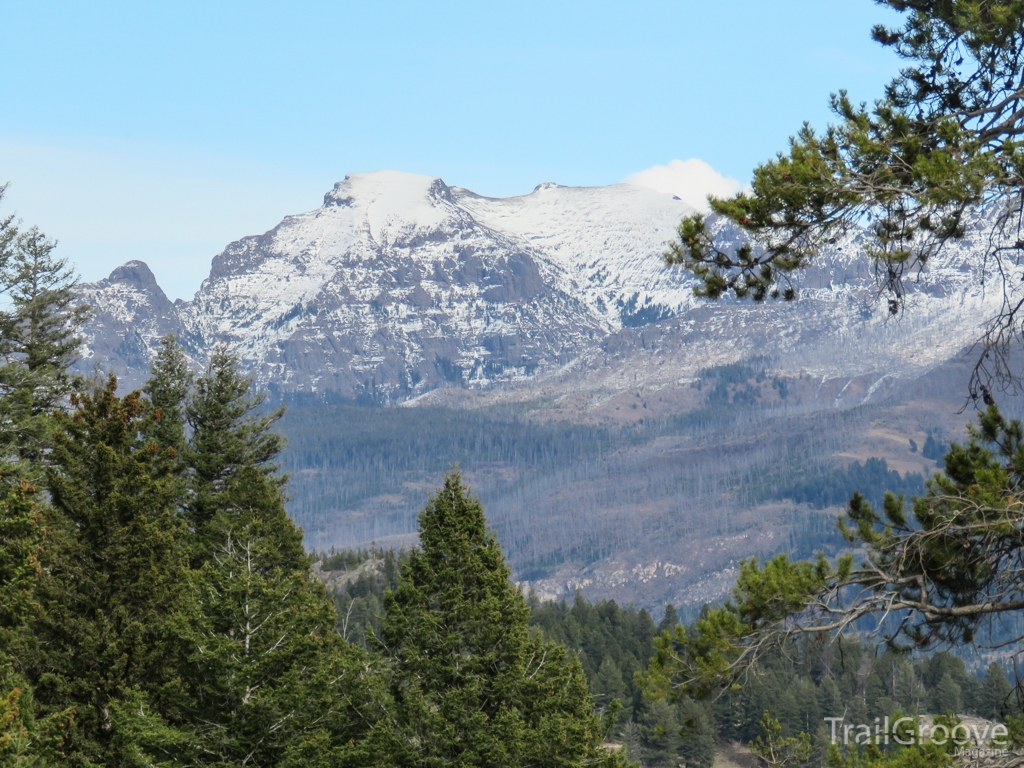 While descending the hillside and crossing the meadow, we gave several outlaw bison a wide berth and also kept our distance from a fresh-looking bone pile. Wildlife experts stress the importance of staying far away from any carcass or fresh bone pile to avoid having a dangerous encounter with a grizzly or disrupting the activities of wolves and other creatures.

It was easy to see why ungulates congregate in these lush grasslands, why their predators follow them here, and why other animal species thrive in this environment. I spotted a beaver lodge close to Slough Creek Trail, and began to understand that beavers must have played a major part in producing the wildlife-rich setting. On the bank of what appeared to be a beaver-created pool, a family of otters had left evidence of their approval of the setting. They had worn a deep, slippery slide in the mud; it was a good eight feet long and dropped straight into the pool of standing water. 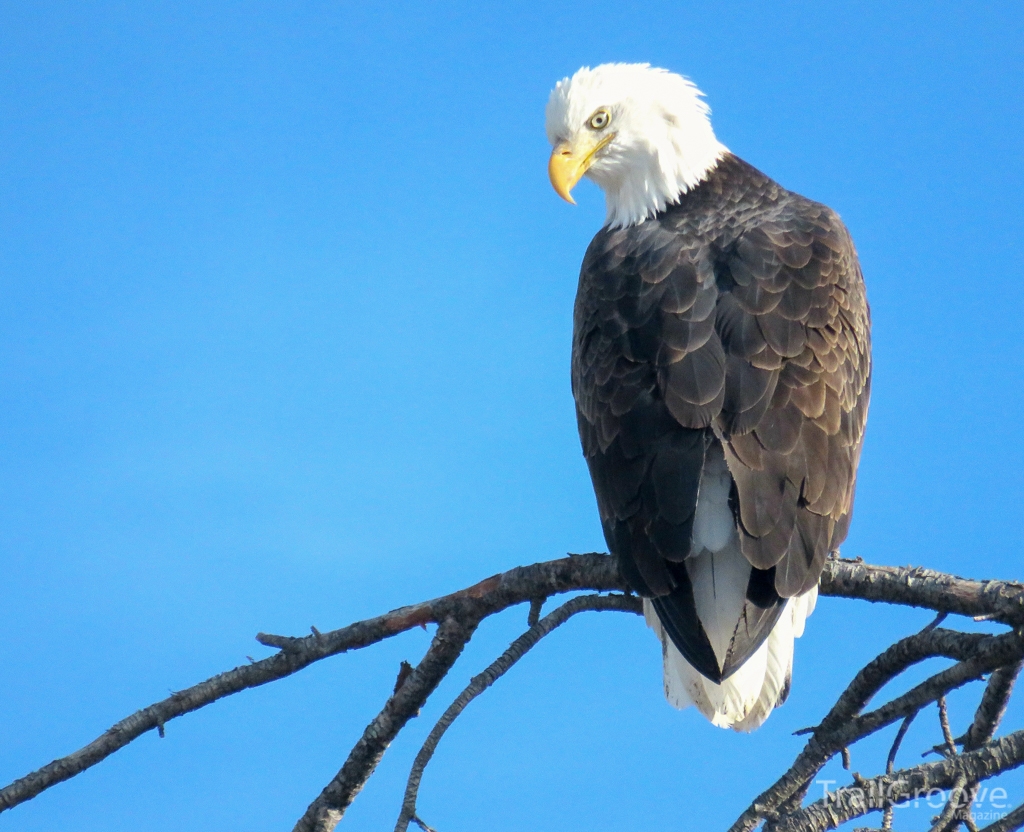 Reaching Slough Creek Trail, a left (north) turn leads away from Slough Creek Campground, past the patrol cabin toward Silver Tip Ranch, a private lodge just north of the national park boundary. The lodge is permitted to transport supplies and visitors on the trail using horses and wagons.

To complete our loop and return to the campground, we turned right (south), and hiked through rocky, forested terrain to reach the trailhead and large wooden sign where you would normally begin a walk on the Slough Creek Trail. The distance from the patrol cabin to this trailhead is 1.8 miles. 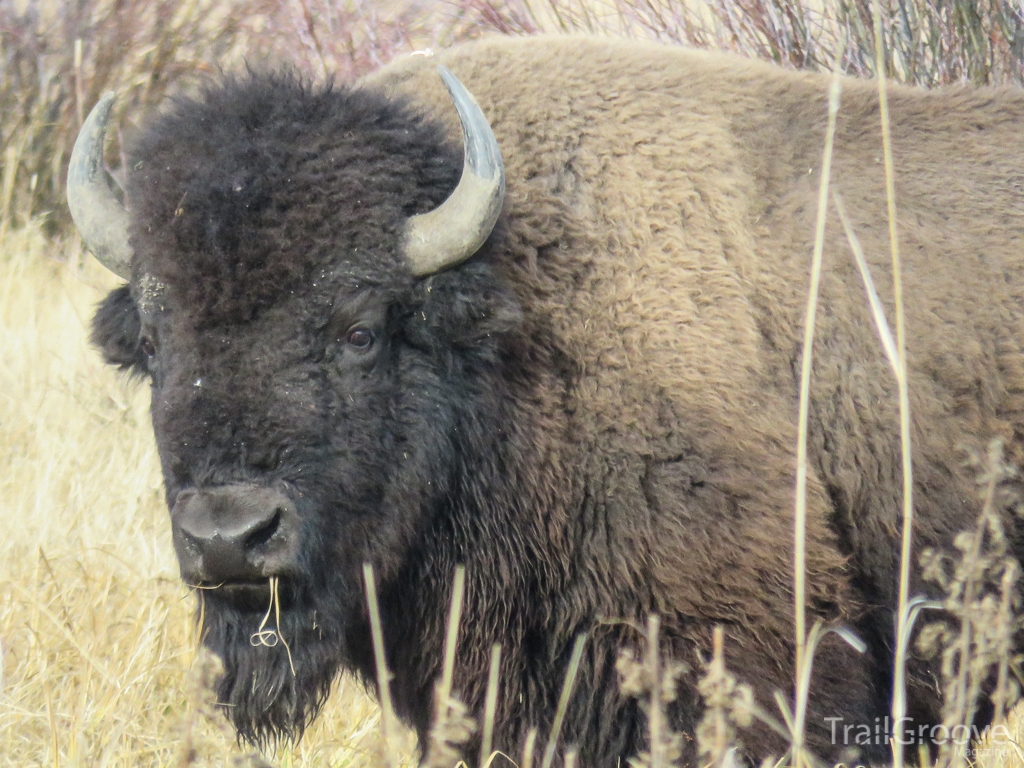 From the Slough Creek Trailhead, John and I walked the remaining half mile to the campground and our vehicle. As we drove back to Route 212, the drama of the little red dog and its mother was on my mind, and we stopped at the highway turnoff to see if we could learn what happened. One of the morning’s “wolfers” was there, and she filled us in.

The news was startling. When last seen, the bison calf was still alive. After John and I left that morning, the wolves continued their coordinated –and seemingly unstoppable – attack for a time. Then, for unknown reasons, they backed off and vanished from the scene.

Maybe these wolves were young pack members practicing the hunt, learning how to “test” vulnerable prey and other skills. Or it could be that they tired of the standoff and the threat of injury by the mother. Perhaps these intelligent predators determined that the youngster could most likely be killed later. During Yellowstone’s harsh winter months, wolves grow hungrier, and many of their prey gradually weaken and are less able to fight off predators.

This calf was the youngest I’d ever seen at this time of year, born dangerously close to the arrival of harsh weather. Most calves arrive at the end of April or during May, a time that offers the best chance for their survival and for the survival of the herd itself. I assume that the red dog’s late birth was a simple accident of nature. I asked a naturalist friend what chance it had of surviving the winter – “Hardly any,” he answered. On the other hand, the little guy had already defied the odds and made it through the day. 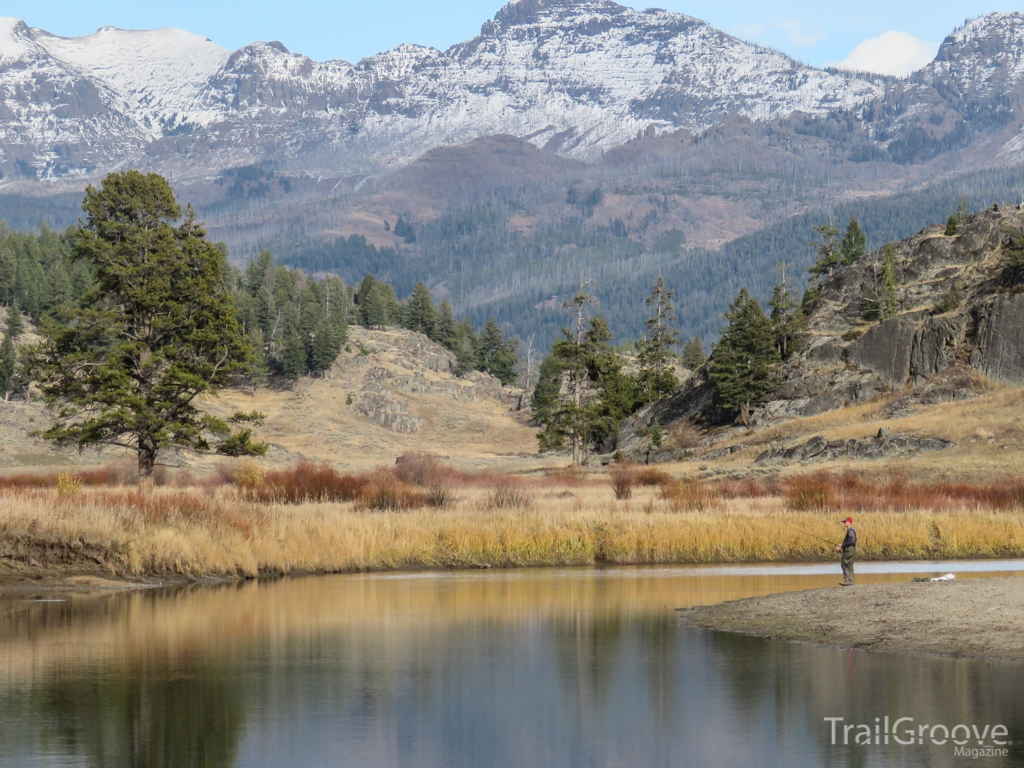 Information: There are no peaks to bag or brag-worthy river fords on this route. But what could be better than a beautiful, reasonably short Yellowstone loop hike with the possibility of spotting a variety of wildlife? No crowds. No hard-to-get-to trailhead. And, with enough caution, this would make a great family adventure with kids who are experienced hikers. Bring bear spray, separate shoes for water crossings if you don’t want to hike in wet boots, and a good map and compass. Basic route finding skills are helpful. You can also hike the loop in reverse from the direction that I describe, but this could make route-finding in the loop’s middle section more difficult. Instead of the loop hike, you have the option of an easy in-and-out walk of any distance (with no water crossings) by starting at the Slough Creek Trailhead described above. Check the Yellowstone National Park website for complete information concerning roads, campgrounds, wildlife, and park alerts.

Best Time to Go & Getting There: Slough Creek Campground is located two miles down an unpaved road from Route 212, 25.8 miles east of Mammoth Hot Springs.The two mile-road from the Route 212 turnoff to the loop trail is open from late spring until early November. During this roughly five-month period, the loop can be completed unless the water level is high. Fall is probably the best choice because the stream crossings offer lower water levels, but again, be extra alert for grizzlies. If you’re interested in camping, Slough Creek Campground is open for camping from mid-June until early October on a first come-first served basis. The campground was threatened but not destroyed by fire in 2016.