For the past few years I’ve almost exclusively used zero drop shoes for nearly any foot-powered activity you can think of, and eventually I suppose it comes as no surprise that I found myself trying out shoes from a company that only makes zero drop shoes – Altra. With the Lone Peak 1.5 (reviewed here), I found a shoe that was zero drop and built for the trail, had enough cushioning to, well, cushion the ride, but also had enough protection underfoot and above, leaving your feet in decent shape even after long days. A good balance, and as such I’ve worn out some pairs, and even picked up a few more on clearance as well. While the shoe wasn’t perfect, it was close. Last year, Altra released the successor to the 1.5 – the Lone Peak 2.0. 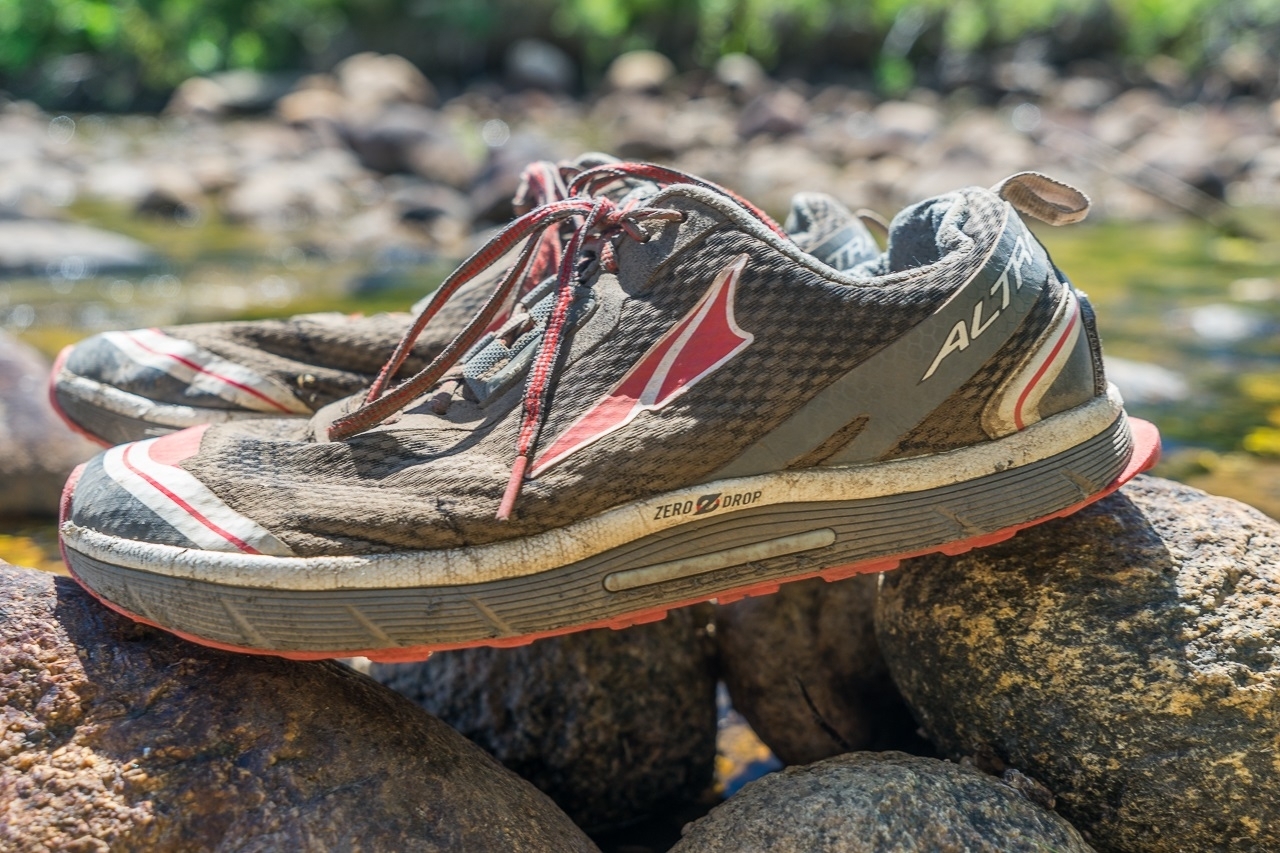 Although it’s no longer the hot shoe with the release of the Lone Peak 2.5, you can still find the 2.0, and considering it’s now nearly always on sale it’s possible to pick up last year’s model and grab a good shoe at a good price.

With the Lone Peak 2.0 Altra has increased the cushioning of the Lone Peak, or the stack height, from 23mm to 26mm, and on paper this is the main difference between the new and old model other than colors. The shoe features an outsole design with lugs that let you know it’s a trail shoe, but aren’t overly-aggressive. Above the EVA midsole is Altra’s Stoneguard, providing protection from sharp rocks yet still allowing them to deflect into the outsole for a smoother ride compared to shoes that feature a rockplate-first approach, which could rock over rocks. (In a not so good way) Above the rockplate you’ll find a thinner layer of cushioning before moving to the upper. The sole wraps up to offer some protection for the toes, while a thin, lightweight layer of additional material in this area assists as well. The shoe features a gusseted tongue, and the area around your heel is well cushioned. Towards the rear of the shoe you’ll find the Gaiter Trap, Altra’s built-in solution to secure your gaiters if you use them, and the trademark Trail Rudder, which aims to give you additional traction on descents. I only use gaiters in deep snow with boots, and I’m honestly not sure if the additional outsole extension helps, but neither seem to hurt, either. Lightweight mesh makes up the majority of the rest of the shoe. My pair in a size 12.5 weighs in at 27.7 ounces. 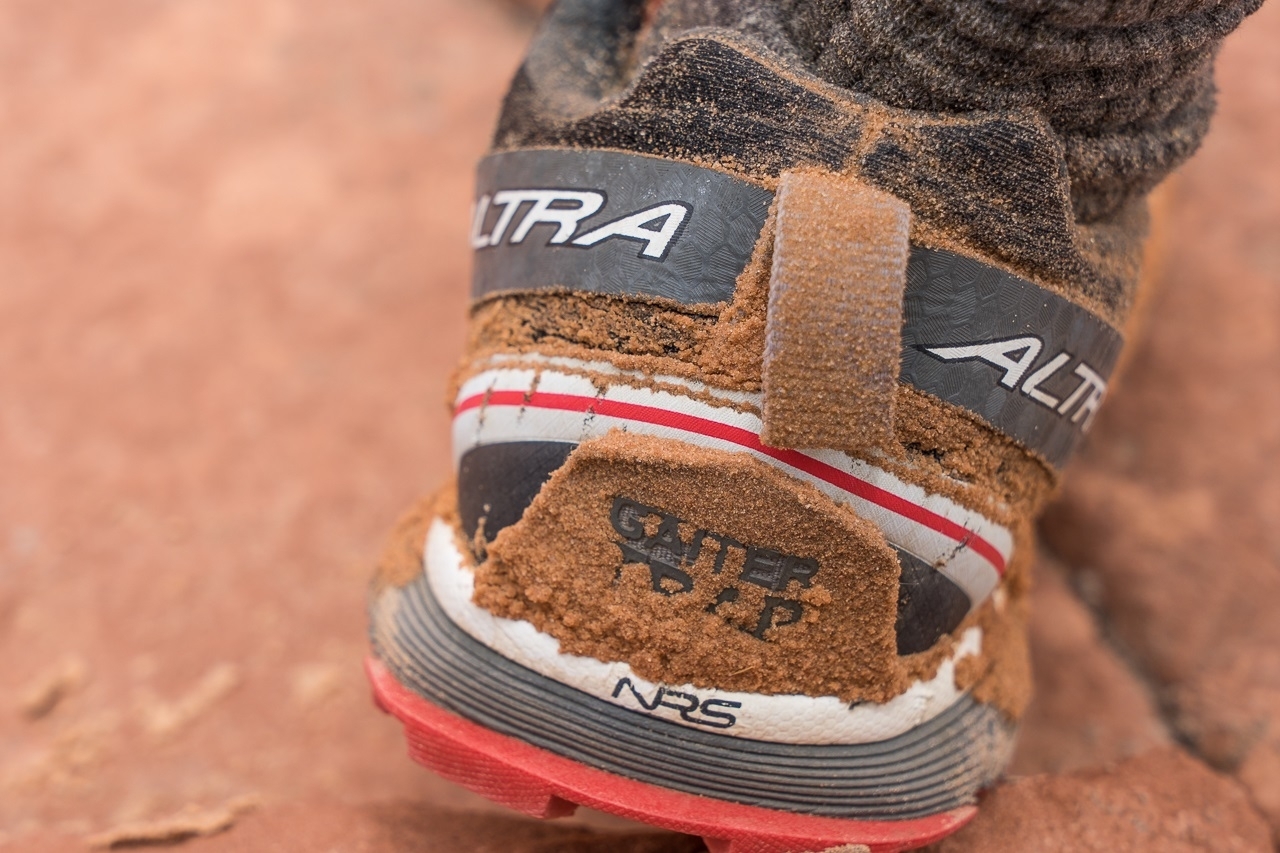 Comparison to the Lone Peak 1.5

I was initially, not in a rush to pick up the 2.0 after hiking, running, and backpacking all of last year nearly exclusively in the 1.5. My main concern was the stack height – while I like some cushioning, raising it up too high also raises your feet higher off the ground, leading to less stability and more propensity for a rolled ankle. Basically, I’ve found the lowest shoe you can get away with to be ideal, although the 2.0 only raises the stack height 3mm over its predecessor. Eventually, I caught the 2.0 on sale and have been using the shoe for the majority of the year. But back to that stack height. 3mm doesn’t sound like much, but it’s immediately noticeable. The shoe rides as though it’s a larger difference, but the additional cushioning has been appreciated. The shoe offers more protection across rocky terrain, and a plush ride over all conditions. The shoe of course does also ride higher however, although I haven’t found it to be a problem. The outsole design of the 2.0 has been changed slightly as well, and the new design does seem to offer some traction advantages. However it comes with a drawback, as I found the lugs lining the outer portion of the shoe tear and break off – I even experienced this after an easy first hike. There’s less protection for the toes on the new model as well, both as a result of a smaller portion of the outsole wrapping up in front of the toe, combined with the use of a less stout material that’s utilized in this area. Fit is nearly identical to the old model, but better. I initially became concerned after reading online reviews stating that the new model ran larger or smaller, but I stuck to the size that fits me in the 1.5, which was a good decision. In the 2.0, the heel feels more snug, with less excess height throughout the upper – I don’t have to lace the new shoe as tight. The laces are better as well, they actually seem to stay tied. The drain holes in the toes and the “trail rudder” have been reduced in size. A thin removable foam insole completes the package. 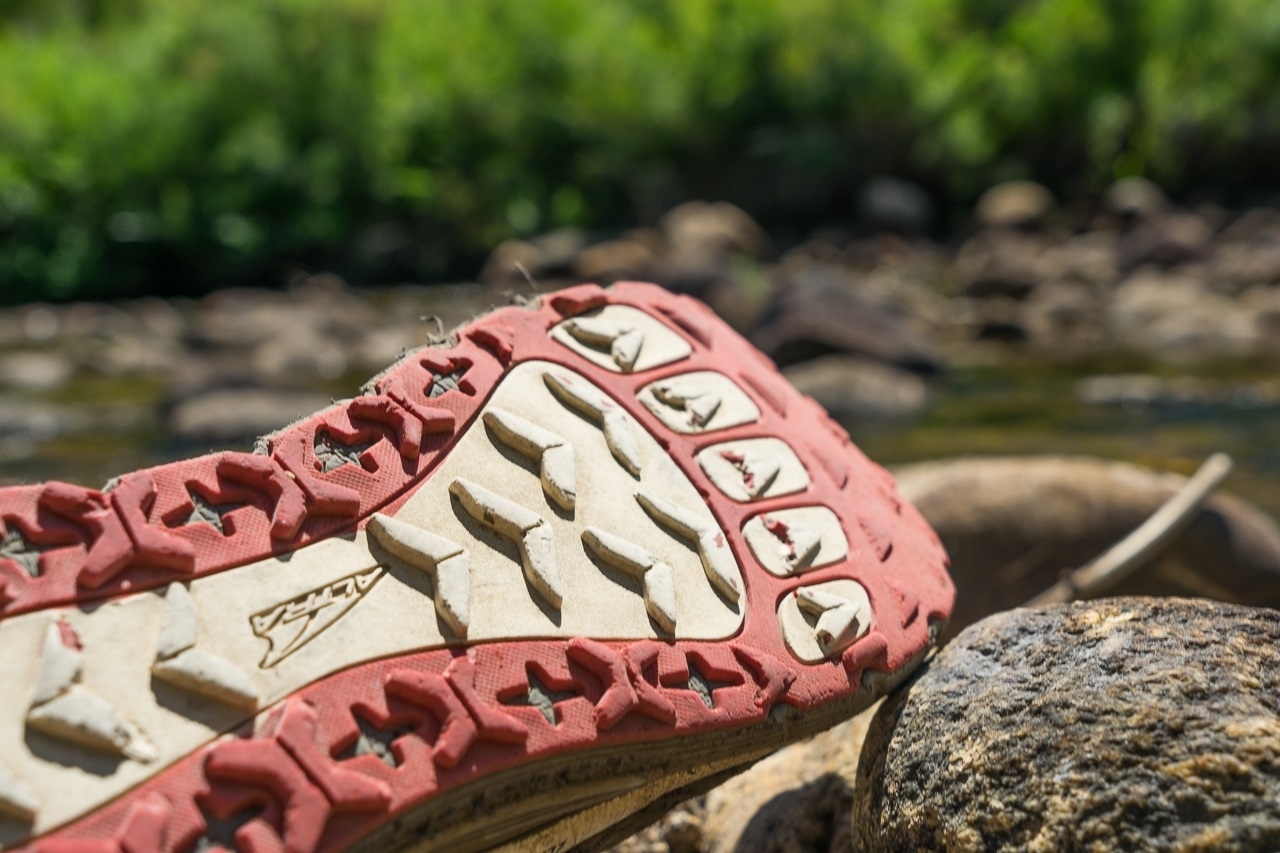 Performance wise, the shoes perform quite well. Traction is adequate and durability as a whole has been good, and despite the less rugged design around the foot I haven’t experienced any bruised toes or badly ripped mesh. I’m 50/50 on the stack height of the shoe. It’s definitely nice to have the extra cushioning – my feet and knees have appreciated it. However, switching back to the 1.5, I just feel more stable and connected to the terrain. It’s a tossup. 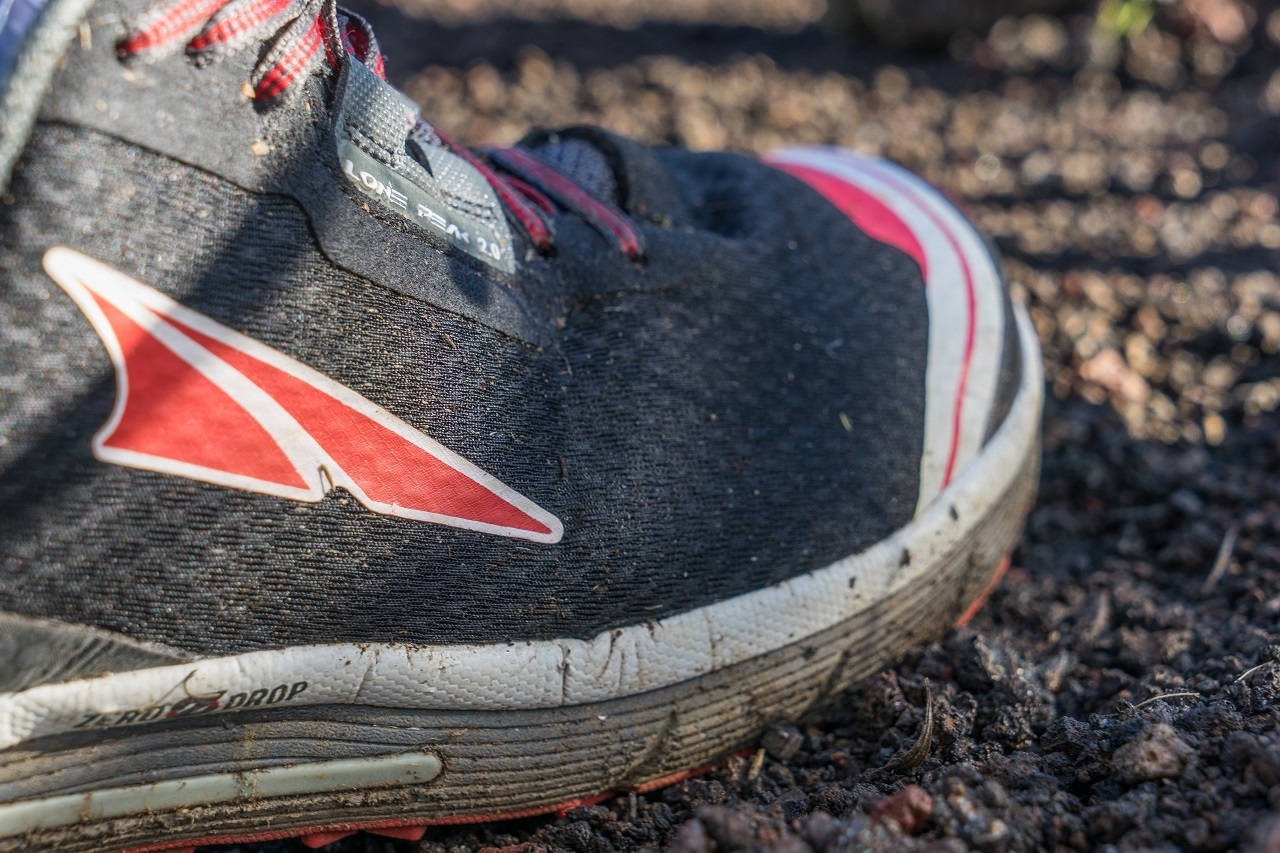 Though I’ve only had the new Lone Peak 2.5 for a couple weeks and am not in a position to fully review the shoes quite yet, I have been wearing them for a few hikes and runs and find they’re a little different the either of the two previous models I’ve used, but with the same idea. Although there’s still plenty of room in the forefoot width wise, it feels as though the height of the toe box has been reduced while overall the shoe feels looser in the heel – I liked the fit of the 2.0 better. But we’ll see if my opinion changes over time. 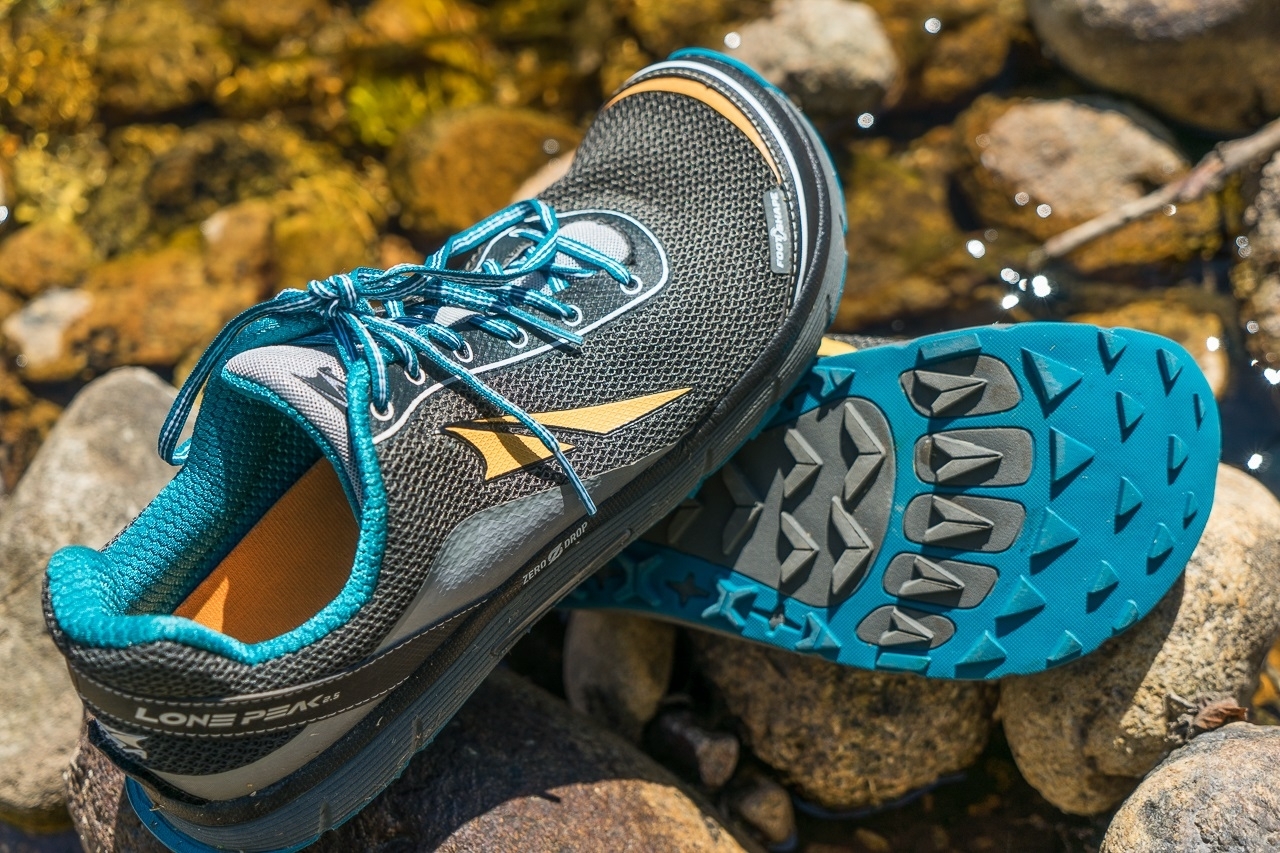 Traction seems fine and so far at least, I haven’t experienced any issues with sole wear other than what you’d expect normally. In short, I’m not sure if it’s a better shoe than the 2.0 yet, but they’re definitely nice shoes and will work. With the 2.5 Altra has lightened the shoe a bit, (down to 24.5 ounces for my 12.5 sized pair) the stack height is now listed at 25mm, and they’ve redesigned the upper –Altra is also promising more durability in that area along with the sole. Lacing has also been changed, and the laces slip less on their own when you’re tightening or loosening the shoes and in theory I suppose less while you’re wearing them. Fit wise, the same size feels best in both the 2.0 and 2.5 models in my case. 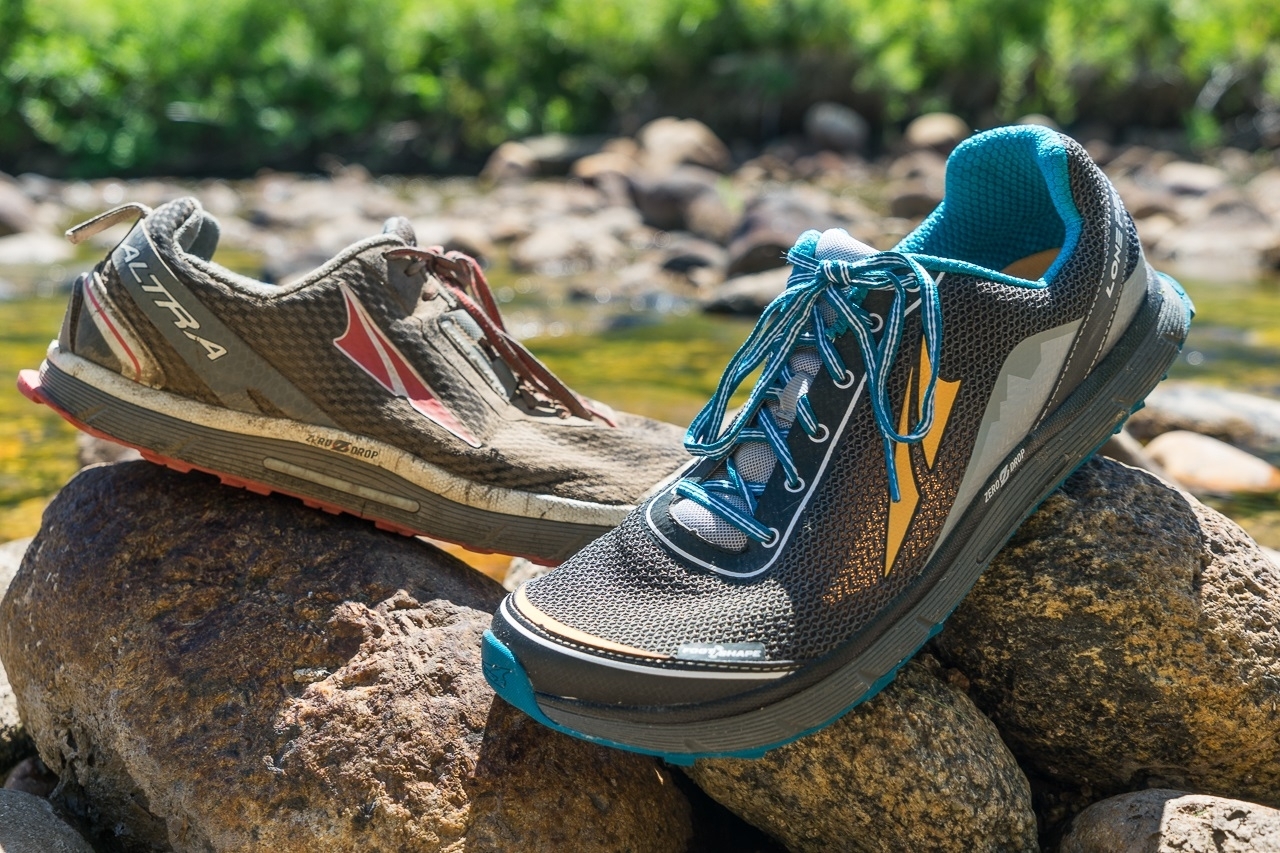 Overall, I have mixed feelings regarding the Lone Peak 2.0. The level of cushioning is nice, and the fit, while quite personal, is refined and just about perfect. This does make you want to reach for the shoes for just about any outdoor activity, but there are also drawbacks. It’s less of a burly shoe these days, and instead of the outsole simply wearing down over time, you’ll lose pieces of it as you go. It is more of a mental annoyance that an actual hindrance however, and on the flipside, Altra does state that you’ll get 300-500 miles out of their shoes – and with an estimated 500 miles or so on my pair, I’d say that’s about right. I could keep on using the shoes for some time, but traction is beginning to suffer on loose trails and I’ve experienced some downhill skating on a few occasions as the traction has diminished over time.

Although it’s been replaced by the 2.5, the Lone Peak 2.0 is still available (mostly now on clearance) in 2 colors in both men’s and women’s specific models and retails for about $120. I picked my pair up Here at Amazon, and they’re also available directly from Altra. You can also find some still in stock here at CampSaver.

If you're ready to jump to the newer 2.5, they also retail for around $120, but you can frequently catch a sale. Take a look at the 2.5 here at Amazon, REI, and over at CampSaver.com.